Steele Shines in Shenzhen
Shenzhen, China: Chris Steele showed his mettle on day one of the WMRT Match Racing World Championship. The skipper of the young Kiwi team, 36 Below Racing, put on a dominant display in his fleet racing group. The first two days are all about doing well enough in the six-boat fleet racing Qualifying Stage to be able to move forward into the match racing knock-out rounds.

Scores of 1,2,1,1 place Steele as the clear leader of Group 2 ahead of Ian Williams who sits on 11 points, a point in front of top 49er sailor from Australia, David Gilmour.

While Steele is running away with Group 2, the leaderboard is much tighter in the other two groups. Former Match Racing World Champion Taylor Canfield holds top spot in Group 1, but only by a point ahead of defending world champ Phil Robertson and Frenchman Yann Guichard who are tied for second.

The first day of the WMRT Match Racing World Championship marks the prologue leading into the 2017 China Cup International Regatta.

Wednesday sees the conclusion of the fleet race Qualifying Stage, when the bottom team in each group will move to the Sail Off to fight for the remaining spot in the Super 16 Stage.

2018 World Cup Series - Round 1, Gamagori
Five more World Cup Series Japan champions were decided in Gamagori as the inaugural World Sailing event in the land of the rising came to a close.

As Typhoon Lan heads towards Japan, racing was scheduled to commence at the earlier time of 10:40. A light 3-10 knot breeze from the north made things challenging, as the wind varied in strength and direction throughout the morning.

Many of the athletes competing in Gamagori will now head 300km up the coast to Enoshima, host venue of the Tokyo 2020 Olympic Games, for training and Enoshima Olympic Week.

Following that, racers will head to Miami, USA for the second leg of the 2017-18 World Cup Series in January 2018. 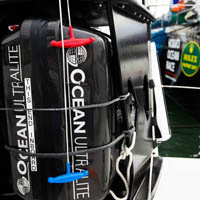 After many months of hard work and training the Volvo Ocean Race has finally got underway on the first leg from Alicante to Lisbon, the leaping off point into the open oceans that lie ahead. Safety preparation could not have been more stringent. Ocean Safety has provided a broad inventory of safety equipment including two ground breaking super lightweight Ocean SOLAS Ultralite liferafts for each boat. Every yacht will also carry two Ocean Safety bulkhead mounted Jonbuoy Recovery Modules with Jonbuoy horseshoes fitted with an Ocean Signal MOB1 which automatically activates if the Jonbuoy is launched. Other new equipment includes custom flare packs containing smoke flares, hand flares and rockets.

Ocean Safety conducted intensive training sessions, several days each for all the crews, including classroom training and practical liferaft and man overboard sessions in an environmental swimming pool.

And that's still not all - Ocean Safety will be checking the kit at intervals during stopovers to make sure servicing is carried out where needed, so that everything is always ready to go at a moment's notice. Everyone at Ocean Safety wishes the Volvo Ocean Race crews a fantastic adventure of a lifetime! 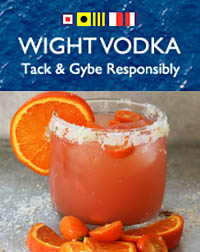 In support of Sail Aid

Thanks for the dozen initial submissions for this year's contest... please keep them coming!

Remember, there are two prizes this year, one for the Caribbean, one for Elsewhere. And while you're making your submission, give a thought to those who have lost so much from the hurricanes this fall, you can donate to SailAidUK at our supporting website or directly at www.sailaiduk.com

We suggest you mix a batch of this and think about a beach and a bar...

The Bucket will go on
Despite the hurricane damage felt in St Barths, the industry's biggest superyacht regatta will not be dampened...

A month on since the Hurricane Irma wreaked havoc on many of the Caribbean islands, the organisers of the St Barths Bucket have confirmed that the 2018 edition of the superyacht regatta will go ahead as planned.

"As we have stated before, the people of St Barths are resilient and the recovery progress is ongoing," says Peter Craig, St Barths Bucket's event director and race chairman. "Many restaurants, villas and hotels plan to be 'open for business' and ready to welcome visitors in November and for the holidays. The airport, roads, and port are open with services already restored to many."

In a statement issued to yacht owners, captains and friends of the Bucket, Craig confirmed that the Bucket stewards are committed to a 2018 St Barths Bucket that will provide all that the storied event is famous for: superb competition, fantastic shoreside socials, and the Bucket hallmarks of camaraderie and sportsmanship.

At this early date, 25 superyachts have already indicated their intent to participate, with the current entry list including many regular Bucket supporters such as Axia, Rebecca, Rosehearty, Unfurled, Visione and Zenji. There will also be representation from the J-Class fleet, with Svea and Velsheda having signed up already. The organisers will be posting and emailing the Notice and Conditions of Race shortly and will email the entry application to those programmes that have accepted their invitations. -- Bryony McCabe

Four British Sailors (Kate Hedley, Carol Dudgale, Steve Bramwell and Geoff Crowdace) had an all expenses paid trip to Italy to take part in the "Barcolana", the biggest yacht race in the world which this year had 2101 entrants racing from one start line in the bay of Trieste.

The invitation, to Trieste was made by the Northern Mediterranean branch of the International Yachting Fellowship of Rotarians. It follows a visit by four Italian disabled sailors to Cowes, who successfully took part in a Disabled Sailing challenge in the 2017 Round the Island Race. The Disabled Sailing challenge was supported by the Italian Prosecco DOC Consortium in both Cowes and Trieste.

It is hoped that there will be more entries from teams of Disabled Sailors in the 2018 Round the Island Race in Association with Cloudy Bay. It is intended that the entry information will be included in the Notice of Race for 2018 in due course. -- David Brunskill

The 2017 RORC Transatlantic Race makes up one half of the Atlantic Anniversary Regatta (AAR). The second race, organised by the RORC and Norddeutscher Regatta Verein (NRV), starts from Bermuda on 7th July 2018 and finishes in Hamburg, the home port of the NRV, celebrating its 150th anniversary.

For the RORC Transatlantic Race, two of the favourites for the overall win under IRC will also be racing from Bermuda to Hamburg. Jens Kellinghusen's German Ker 56 Varuna, representing the NRV, and Eric de Turckheim's French Nivelt-Muratet 54, Teasing Machine. Both owners are members of the Royal Ocean Racing Club. Whilst both of the yachts are new to the racing circuit and relatively the same size, there is a huge difference between them, as Laurent Pages, Teasing Machine's tactician and winner of the Volvo Ocean Race, explains:

"Varuna has a canting keel and a powerful hull shape," commented Laurent. "We have just completed 10 days testing with the new Teasing Machine which is fixed keel. We are happy with the performance over a broad range of conditions. I have no doubt that Varuna will be quicker in strong reaching conditions, but racing across the Atlantic is not a straight forward sprint; there are local effects and you need to always be looking forward to get your strategy right. Varuna should be ahead of us for the race. However, after time correction, Teasing Machine has the ability to change that. Personally, to race across the Atlantic twice in the same year is fantastic. It is a rare opportunity."

The entry list is still open for competitors interested in taking part in the RORC Transatlantic Race, run in association with the International Maxi Association, and is the first leg of the commemorative Atlantic Anniversary Regatta starting on 25th November 2017 from Lanzarote to Grenada.

The #LifejacketSafe campaign aims to increase safety awareness by highlighting the importance of not only wearing a personal flotation device, but also making sure it is worn correctly and is well maintained. So, if the worst should happen, you are well equipped and can rest assured that your safety equipment is not going to let you down.

Should ignoring storm alerts carry criminal penalty?
There are now calls for legislation to penalise people who disobey advice from the Coastguard.

Despite warnings telling people to stay inside and avoid going near the sea, there have been numerous reports of people not paying any heed to this safety advice.

Taoiseach Leo Varadkar has said he will consider making it a criminal offence to ignore severe weather warnings as some people did during Storm Ophelia.

'People who disobeyed the red alert and travel warnings yesterday didn't just put themselves at risk they also put at risk the lives of other people, particularly our emergency services. But I would never rush into creating a new crime. I think it is something that we will have to consider' "It was suggested today in the Dail that we would look at it on an all party basis and that's what I'd like to do."

"They are not only putting their own lives at risk they are also endangering the lives of all the voluntary bodies, who give up their own free time to save lives.

Original spec TP52 that has had a 2013 refit, including new paint, and has been little used since. Full offshore interior with heads and galley.

"Wan Ma Rang" is a well optimised and cared for GP42 design, that offers huge potential under IRC and ORC racing, through a wide range of wind conditions. Continually upgraded throughout her life.

One of the most competitive ORC boats on the market today, with a sister ship having recently won the 2016 World Champs. Get in touch to learn more and be on the podium in Poland 2017!

The Last Word
I think we can all look forward to the time when these three theories are given equal time in our science classrooms across the country, and eventually the world; one third time for Intelligent Design, one third time for Flying Spaghetti Monsterism, and one third time for logical conjecture based on overwhelming observable evidence. -- Bobby Henderson