Canfield and crew won three of the four races in winds ranging from 12 to 20 knots on Hamilton Harbour. They showed grit and determination in clawing back from deficits and a killer's instinct in laying penalties on Williams and crew. They also showed great boatspeed when free and clear on the racecourse.

For Canfield the victory is his third at the Bermuda Gold Cup (2012, '18) and second Open Match Racing World Championship (2013). -- Sean McNeill 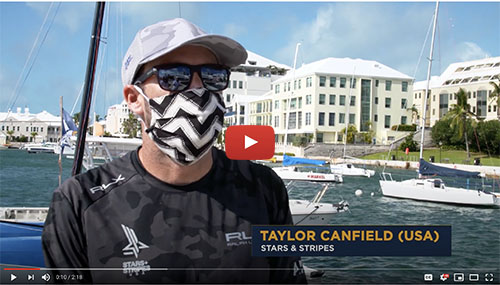 Emirates Team New Zealand to go back to Arbitration Panel
Click on image to enlarge.

Auckland, New Zealand: As contemplated by the America's Cup Arbitration Panel when they made their Order on the 21st October with regard to the usage of the inner Harbour race Courses (Courses B and C), the Defender Emirates Team New Zealand tabled a proposal with the Challenging teams in an effort to resolve the issue and return racing to the inner city race courses.

That proposal made it clear that the Defender would not sail in the area defined as Course B&C on the race days when the Challengers couldn't race there to eliminate any extra sailing time or perceived advantage the Defender might have.

Luna Rossa, without specified reasoning have sadly rejected this proposal saying only that the Defenders proposal is 'far from fair and is not acceptable.'

On any level this seems a surprising position to take particularly when there seems no justifiable rationale given it clearly satisfies the 'equal use of courses'. Especially given the fact that specific courses (B and C) would also be available for the best of 13 race Prada Cup final regatta which the Defender is not part of.

Therefore the Defender will now refer the Dispute to the Arbitration Panel requesting a formal Mediation of the issue.

Smooth and consistent power delivery from the grinders is the key to keeping your AC75 aloft... and that took a bit of a Harken rethink

Have you noticed something different about the way the AC75 grinders are working their pedestals? It's not what you see in the videos (if you catch a glimpse of them at all as they now practice their art low in their cockpits well out of the airstream); it's what you don't. You'll never see any of the grinders pause, shake their handles or reverse direction when changing gear. Instead they just keep going at a constant cadence, maintaining the optimal 80rpm. The new technology that enables them to do this - a game-changing innovation by Harken called True-Clutch - has been on the AC75s for more than a year but until now it's been kept strictly secret.

For a very long time, pedestal systems on sailing yachts have relied on 'dog clutches' that activate by manually engaging sets of teeth to shift from one gear or function to another.

Full article in the November issue of Seahorse

Four Presidential candidates were up for election in the first round and no candidate received more than 50% of votes. A second round of voting was required between the top two candidates. Kim Andersen (DEN) and Li advanced to the second round.

World Sailing Member National Authorities, in good standing with World Sailing, were eligible to vote and when casting their ballot, they were required to vote for at least two male and two female candidates for Vice President.

The newly appointed Board of Directors will serve a four-year term up until the 2024 General Assembly.

Star Europeans
Piet Eckert (SUI) and Frederico Melo (POR) are the 2020 European Champions thanks to a great week of sailing in Riva del Garda, Italy, that translated into a winning scorecard. The silver medal goes to Diego Negri and Sergio Lambertenghi (ITA), who didn't start the week at their usual pace, but were able to come back winning yesterday's two races and finishing second in today's final race. Sitting in third the Austrian duo Hans Spitzauer and Christian Nehammer, after a very consistent week in which they have always been among the leading pack of the fleet.

In today's final race the wind from the North blown from 12 to 15 knots and the Fraglia Vela Riva Race Committee, with PRO Giancarlo Crevatin, set yet another flawless course, the fleet was too eager to start though and after a general recall, three boats were over the line early, and only one team, Flavio Favini and Nicolas Serravalle, managed to come back inside.

The one and only Star Class Continental Championship was closed today in Riva del Garda, Italy, and everyone is already looking forward to a full schedule of racing for 2021, if the global pandemic will allow it.

North Sails Vendee Globe video series featuring Loick Peyron
With his impressive list of accomplishments and accumulated offshore miles Loick Peyron is justifiably regarded as one of the greatest ever French sailors. He took part in the first edition of the Vendee Globe, where he finished second.

Now Peyron has collaborated with North Sails to lend his voice as narrator of a six-part video series about the Vendee Globe in which he shares his perspective on this legendary race through the stories of the exceptional skippers who dare take to take it on.

In this first episode, Loick recounts the history of the Vendee Globe through his eyes, from its origins to the present day, a race that has left an indelible mark in people's minds. 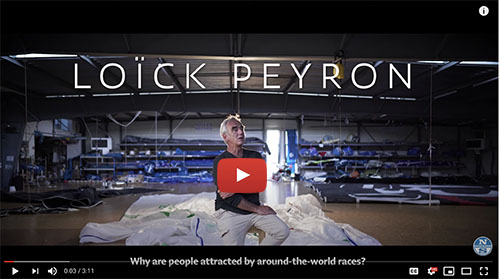 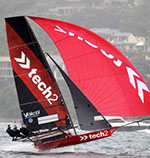 With 25-knot South Westerly winds gusting to 30-knots, race officials elected to set a two-lap windward-return course between Nielsen Park and Double Bay, and only seven of the 18 boats entered for the race elected to venture out onto the stormy harbour.

Just three of those teams, tech2, Yandoo (John Winning) and Smeg (Dave O'Connor), were on the line when the starter signalled the race start but the trio provided a tight contest as they ploughed head-long into the wind to reach the windward mark off the mouth of Double Bay.

The only other team to complete the course aw Noakesailing (Sean Langman).

Races 5 and 6 of the Spring Championship series will be conducted next Sunday, November 8. -- Frank Quealey, Australian 18 Footers League Ltd.

The forecast was very windy and many events across the country were cancelled. With a suggested peak in the wind around midday we looked to get racing in early on Saturday and review at lunchtime. The new balcony, modelled on the Yacht Club in Monaco, was in place and this created optimism on the weather which did not disappoint. The gusts were far lower than forecast topping out at a modest 26knts. The sun came out and if you closed your eyes you could easily imagine yourself overlooking the Mediterranean in the south of France!

Saturday was epic. Four races were completed before lunch with a further three in the afternoon. With 36 sailors the RS Aero 5 fleet was the popular rig choice due to a number of RS Aero 7 sailors downsizing due to the gales. We already had four separate winners including Oliver Meadowcroft, Jonathan Bailey, Cameron Sword and Ben Hutton-Penman. By the afternoon Ben had put his stake in the ground with two more bullets. Former world champion, Andrew Frost, got off to a slow start to the championship adding pressure to his later races.

On Sunday Ben had mixed results with some new names on the podium including Tom Ahleid and Ralph Neville. After twelve races Ben had done enough to secure the gold medal position and Frosty had pulled himself into silver. David Peaty, with probably the most consistent results, secured the bronze.

In the RS Aero 7 fleet, only two sailors remained to duke it out in the fresh breeze, so the match racing series was set and what a series! It was a race to the end as Tim Hire's upwind speed was more than matched by Chris Hatton's downwinds. In the final three Tim dominated to com back from behind to take the crown.

Those who are nominated for the Rolex World Sailor of the Year Awards demonstrate excellence, performance and accomplishment. Previous winners make up an illustrious list of the most celebrated names in the sport all whom have excelled at the highest level.

Male and female winners receive the unique marble and silver trophy depicting the globe, crowned with five silver spinnakers representing the continents, together with a Rolex timepiece.

Due to the interruption to the sailing calendar caused by the current global pandemic, the Rolex World Sailor of the Year Awards will not be presented in 2020. Success and excellence within the sailing community will next be celebrated at the 2021 World Sailing Awards.

Bayview and Chicago Mac Races adopt ORC
Bayview Yacht Club and the Mackinac Race Authority announced it will adopt the ORC Rating System to score the 97th consecutive Bayview Mackinac Race which starts on 24 July 2021. This decision is in conjunction with Chicago Yacht Club who is making the same change for its 112th Race to Mackinac, which starts on 16th and 17th July 2021.

Every summer the races to Mackinac are the focal point events in the Great Lakes sailing scene, with typical combined entry counts that can annually exceed over 500 yachts. They start, respectively, in Port Huron, Michigan and Chicago, and both finish at Mackinac Island in Michigan, where the post-race celebrations are extremely popular with participants and their families.

The ORC Rating System uses science and technology to develop a boat's handicap to allow fair racing between dissimilar boats. By entering specific measurements into computer software ORC measures how a racing crew can reach their boat's theoretical performance potential in various wind conditions. This Velocity Prediction Program (VPP) allows the race organizers to correct the elapsed time of competing boats to score them on the same level.

More on ORC rating systems, ORC certificates and events can be found at www.orc.org

Arabella's DNA is highly competitive IRC and ORCi racing and most recently she has been optimized with the cutting-edge technology that is being employed by the UK FAST 40 race circuit. This circuit has pushed the boundaries when it comes to IRC rating optimization and she is turn key for 2020.

Aquarius Alfa - the perfect fast cruiser to explore the oceans in style.

Built in 2018 by King Marine, a 56’ bigger sibling of the TP52 class, but designed for regatta sailing, not to a class rule. This Botin 56 has twin wheels, twin rudder and hydraulically powered sail controls, which make her a unique and very potent inshore and coastal racing yacht.

The Last Word
You're educated doesn't necessarily mean you're intelligent too. There's a difference between education and intelligence. -- Richard Feynman