In a stunning development, the struggling US team - who have run out of time and money to build their own AC75 - are seeking permission from the America's Cup independent arbitration panel to use a boat built in another country and take over Team NZ's 'Te Aihe', Newshub reports.

However, Stars + Stripes will have to convince the panel and fellow challengers from Italy, Great Britain and America to receive an exemption to bend the rules, which forbid the use of a boat built in another country.

While Te Aihe is unlikely to be as competitive given the significant developments teams are making to their second generation AC75s, America's Cup historian Tom Ehman says an exemption would infuriate the other challengers and give Stars + Stripes vital insight into where they stand compared to the other three teams - Luna Rossa, American Magic and Ineos Team UK - without having to race them.

"This has never happened before," Ehman told Newshub. "It's outrageous.

"They'll be as mad as hell ... Challengers betraying other challengers.

Falmouth Sailing Week
The Port of Falmouth Sailing Association has announced that the sailing and racing side of Falmouth Week is to go ahead in August. Nigel Sharp and the PoFSA team had met twice a month to provisionally plan towards organising the regatta.

"It was difficult at times as we felt we were looking through an out of focus pair of binoculars" said Neil Andrew, Race Management Officer. When the Falmouth Town Falmouth Week organising committee decided it was no longer possible to hold any shoreside or music events it looked as though PoFSA were going to have to put away our flags and starting guns as well.

Competitors from last year were contacted to gauge interest in holding a regatta that could be organised within government legislation and the responses returned that meant it was a viable proposition. Meanwhile Cowes Week, Royal Dartmouth Regatta and Fowey Week were announcing cancellation so the pressure was on. It wasn't until July 11th that sufficient easing of restrictions gave the team the green light to go safely ahead.

A slimline Falmouth Sailing Week will now take place over four days, 12th - 15th August. There will be two racing fleets in the Carrick Roads and out in Falmouth Bay with the start lines close to Pendennis Point. This will make a great viewing place to watch the action out on the water.

Just as sailors who collect bikes legitimately claim each has a purpose and a use, so Gladiator owner Tony Langley has gathered his mini fleet of three TP52s, each for specific requirements. The ebullient, passionate British owner may increasingly enjoy the variety of domestic corrected-time racing at home on the Solent and forays to the USA and the Caribbean to race, but the 52 Super Series is his pinnacle challenge.

Langley and his Gladiator team are one of the five crews who raced at the first ever 52 Super Series regatta, Barcelona's Conde de Godo Trophy, in May 2012. And though his recent schedule has meant missing a couple of Super Series events to race at the New York Yacht Club his pursuit of perfection remains undimmed.

Full story in the August issue of Seahorse 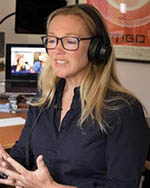 Two-time gold medallist Shirley Robertson has floated the idea of a return to competitive Olympic sailing.

The 52-year-old Scot has concentrated on broadcasting since her second Yngling class triumph at the 2004 Games in Athens.

But she has started competing in the double-handed class, which will be a new sport at the 2024 event in Paris.

"You need sponsors and all that stuff, but I'm really enjoying it," Robertson told BBC Radio Scotland.

"There's still life in the old dog yet. It's different, it's offshore and you sail through the night." While sailing back to her home in Isle of Wight with co-skipper Henry Bomby, Robertson said it was a privilege to interview at recent Olympics athletes who have "this incredible single minded pursuit of excellence".

"Now I don't do it, I miss that - to have that single focus every day is pretty special," she said.

Conrad Colman Forced To Halt His 2020 Vendee Globe Project
A lack of funding has finally required Conrad Colman to call time on his plans to be on the 2020 Vendee Globe start line on November 8th. The Kiwi solo racer's heroic finish, sailing the final 750 miles under jury rig after his mast broke, making the line after a painstaking two battles to take 17th, was one of the outstanding feats of the 2016-2017 race.

Colman, who holds dual New Zealand/US citizenship, says he has worked tirelessly since the finish of the last race to try and make sure he would be on the start line this time, but he has not achieved his budget and needs to terminate his entry process.

"I have been achingly close to getting the money on several different occasions with different companies. First time I was ready to sign a contract when I got a text message when I was in the departure lounge ready to go, telling me it was all off. That was the first disappointment." 36 years old Brittany based Colman recalls, "Then I entered the race and chartered the boat and got very, very close just before COVID locked everything down. That fell apart. Then I had another hot, hot prospect which went close but in the end they said my profile did not match what they wanted, they liked me, they loved the race but I was not going to be playing to win."

Conrad Colman had chartered the 2004 Marc Lombard design which he had named Ethical Power which was started life as Roland Jourdain's Sill.

Sebastien Simon: a new pair of foils for the Vendee Globe
It's one of the trademarks of a top athlete, to know how to bounce back. After breaking his foil on the Vendee Arctic Les Sables d'Olonne, Sebastien Simon has moved swiftly with his team. "I was immediately supported by my partners, which freed me from an obvious stress. Then, as soon as I stopped the race, we considered what it would take to be ready for the start of the Vendee Globe. The first requirement was that an independent expert study had to be carried out to understand what happened." One of the most reputable experts in the industry has been called in who is not linked to any of the parties involved. The idea is to try to understand what happened, although I doubt we will have the actual answers before the start of the Vendee Globe.

At the same time, Arkea-Paprec's team decided to start two new foils at the Persico yard in Italy. The structural calculations have been entrusted to the New Zealand company Pure, one of the leaders in this area. "The foils will be strengthened, but we are sticking with the C-shape. This will allow us to continue training before the Vendee Globe as we still have an intact foil and a replacement foil".

However, the deadlines are going to be particularly tight. "The new appendages should be delivered just before the boat is moored in Port Olona, a few weeks before the start of the Vendee Globe. Of course this is far from an ideal situation for the young sailor from Les Sables d'Olonne, the 2018 La Solitaire du Figaro winner who had programmed his preparation to be at the start of the race in shape to be a potential winner. "This compromised preparation puts me back in the pack with the underdogs. But nothing is ever for certain. In 2016, a similar misadventure happened to Armel Le Cleac'h. That didn't stop him from winning the event. 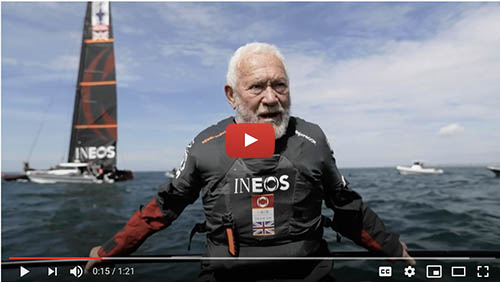 Goran Andersson was World Champion in 1965 and 1966 after previously representing Sweden in the 1960 Olympic Games in the Finn class. But perhaps his greatest legacy was creating the Marinex brand in Marstrand, where he moved with his family at the age of 10.

The 2020 OK Dinghy World Championship was supposed to be sailed in Marstrand, a place that during the 1960s and 1970s was one of the major strongholds of OK Dinghy sailing in Sweden. During the Worlds it was planned to induct Goran into the Hall of Fame to acknowledge his outstanding contribution to the class. Unfortunately that could not happen due to COVID-19, so in May OKDIA Vice President Jonas Borjesson went to visit Goran on Tjorn to not only make the presentation, but also to interview him for the forthcoming OK Dinghy magazine.

High profile entries for NZ Open Keelboat Nationals
There is still over two months until the 2020 Theland NZ Open National Keelboat Championship, but it is looking set to be the best chapter in the events history, with a raft of big names already populating the eleven-strong entry list.

There is an exciting mix of up-and-coming and experienced sailors, weekend warriors, along with a great diversity of male and female sailors already set to be involved.

Defending champion Nick Egnot-Johnson and his Knots Racing team, ranked 2nd in the world match racing rankings, are returning and will be looking to go back to back after a dominant victory in 2019.

The weekend's scheduled kicks off on Friday 28 August with keelboat racing and the 1720 Southern Championships.

Saturday 29 August will see all fleets racing in the morning, followed by the Tricentenary Parade and Admiral's Salute in Cobh in the afternoon.

After the parade, members are invited to berth in Cobh and attend the opening of an exhibition on the history of the club at the Sirius Arts Centre, and/or attend the Quays Restaurant for an informal gathering and food. For more details see the expression of interest form.

Fleet racing resumes on Sunday morning 30 August, with the afternoon's family fun activities featuring crab fishing, boules and a bring-your-own picnic ashore, and a parents' Optimist race on the water.

MOANA is hull No.2 of the 5x semi-custom series and built for an experienced blue sailors owner as THE performance cruising catamaran. She perfectly fits the DNA of the Outremer shipyard with a great 4 cabins version layout.

Deck Saloon version of the popular SW100 series, L'Ondine has been optimised and improved to keep her looking like new while the modernised systems have increased efficiency and reliability

The Last Word
We are stuck with technology when all we really want is just stuff that works. How do you recognize something that is still technology? A good clue is if it comes with a manual. -- Douglas Adams