After the Fastnet and the Brest Atlantiques in 2019, the Maxi Edmond de Rothschild achieved new success by hooking the Drheam-Cup / Grand Prix De France De Course Au Large to its hunting roster for the first time. The duo Franck Cammas / Charles Caudrelier , assisted by Yann Elies, Morgan Lagraviere, David Boileau and Yann Riou, will have spent the entire race in the lead, making the entry difference, along the northern coast of Cotentin, compared to Sodebo Ultim 3 (Thomas Covile) and Actual Leader (Yves Le Blevec). "From the first tack at Omonville, we made a little tactical move ashore which worked very well, which allowed us to create a small gap and pass Shambles with the current, which was not the case of our pursuers,explained Franck Cammas, once the line had been crossed. This small gap allowed us each time to position ourselves well in relation to the weather phenomena, while they were forced to take more risks, especially on Monday afternoon, with the last ridge to pass: we took a course a bit more outside, less risky, Sodebo tried to cut the corner, they lost more than 20 miles compared to us. "

Ian Lipinski winner of the Drheam Cup 2020 in Class 40
A return to the competition, and the Class40s did not disappoint - a race full of suspense! At the head of the fleet, an intense duel was played out in the Irish Sea by Credit Mutuel (Ian Lipinski) and Palanad 3 (Nicolas Groleau). Afterwards a significant gap became apparent between these two Class40s and finally, it was the Reason design which took home the prize. Ian Lipinski and his crew (Gwenole Gahinet, Sebastien Picault and Ambrogio Beccaria) crossed the finish line, just off the coast of La Trinite sur Mer, at 11:30pm this Tuesday 21st July 44 minutes and 36 seconds ahead of Mach 40.40 Palanad 3 skippered by Nicolas Groleau, Sam Manuard, Alan Pennaneac'h and Ludovic Aglaor.

Followed by a trio made up of Lamotte Module Creation (Luke Berry), Everial (Stan Thuret) and Virgin Media Business (Ian Hoddle) that pursued them. The first two finally managed to beat the English Class40 and it was Luke Berry with his crew who completed the podium after crossing the finish line around 2am, just a few minutes ahead of Everial.

For most of the race the Irish/French duo enjoyed a spirited match race against the eventual category winners, French 2012 Olympian Pierre Leboucher sailing with Benoit Mariette, and finished less than five minutes behind the class victors.

Dolan and Jambou were eighth across the finish line overall in the Figaro class which was won outright by Briton Sam Goodchild.

Dolan was pleased with the Smurfit Kappa duo's race and the result, atoning for a disappointing light wind Maitre-CoQ solo offshore race two weeks ago when he finished mid-fleet.

Racing with the Mini Transat winner Jambou, the duo elected to put in some time now to enhance their prospects for next year's two handed Transat AG2R, Transatlantic. And Dolan is preparing to diversify his programme towards selection for Ireland for the 2024 Olympics' mixed offshore racing. The race also represent a gilt edged opportunity to run what will be part of this summer's La Solitaire course.

On returning to base Wednesday Dolan will have the Figaro Beneteau Smurfit lifted out of the water to check for damage after hitting an unidentified object during the race.

In Kitesurfing there have always been two disciplines, freestyle and racing. Whereas the former used to be more popular. However with the fact that kiteboards are now also able to fly while being on foils, this discipline even got the attention by the Olympic committee and is going to be a fix part of the Olympics in 2024.

Robline with its Garda Series, designed as performance flying lines, took a step into this direction. The Garda Series is designed for Racing - thinner - lighter - stronger - having the creme de la creme like Daniela Moroz and Theo de Ramecourt on board in the Robline Racing team - these lines are not created to make compromises but to deliver. Garda lines are available in 1.1 or 1.4mm and being able to carry weight of around 300kg combined with the best raw material and coating on the market.

You want to know more about these kitelines? Check out the Garda Series here

You want to meet the Robline Racing Team? Check it out:

The docuseries gives viewers access-all-areas to follow the Denmark SailGP Team – led by Nicolai Sehested, the youngest helmsman in the annual, global sports championship – as the athletes embark on a series of Team ROCKWOOL Racing training camps and challenges to sharpen their skills ready for when the world's fastest sail racing returns on San Francisco Bay in April 2021.

Episode one, which airs today and is available across both the team and SailGP channels, features never-before-seen footage as the Denmark SailGP Team, presented by ROCKWOOL, prepares for its debut in SailGP in Sydney, February 2020. 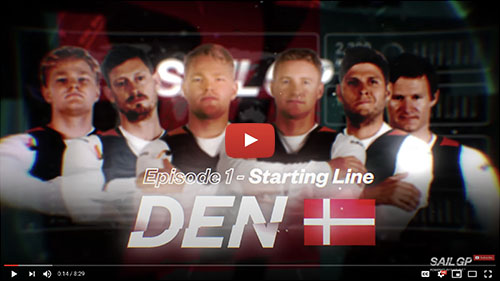 New Zealand's Classic fleet grows
Excavation ahead of the retrieval of the remains of the 53ft Daring lost in 1865 at the entrance to the Kaipara Harbour - Photo by Classic Yacht Charitable Trust. Click on image to enlarge.

Around 250-300 people crowded into Royal New Zealand Yacht Squadron on Sunday afternoon for the ceremonial launch of Ida - the latest, and a superb, addition to the growing fleet of Classic Yachts in Auckland.

The 125-year-old Bailey design is 30ft on the waterline, 45ft overall on the deck and 58ft including spars. She was rescued from an awful fate in Sydney by John Street of the Classic Yacht Charitable Trust - and is the 11th classic vessel on the Trust's register.

The most notable of them all is still a work in progress - the 53ft Daring, dating back to 1863. She was lost on the trying to cross the Kaipara Bar two years later when her master elected to run her up on the northern end of Muriwai Beach after being caught on a lee shore in a SW gale.

She was swallowed by the sands until 18 months ago, emerging after 150 years and was excavated, and is now being restored at Yachting Developments Ltd.

While the current focus is on the America's Cup and latest sailing technology, the Classic fleet forms a vital and very tangible explanation as to why New Zealand sailing and the marine industry it has spawned has a reputation for quality, success and innovation.

Unlike Classic fleets in other countries, New Zealand's is almost entirely comprised of indigenous designs - with most built by their designers.

Team NZ's US rivals take in Wynyard Wharf's views after managed-isolation release
After two weeks of isolation, American Magic CEO and skipper Terry Hutchinson soaked up the view and fresh air down at the America's Cup hub after being cleared to leave his central Auckland isolation hotel today.

Hutchinson told 1 NEWS today that his two weeks in managed isolation were fine.

"I would go as far as to say New Zealand should be proud of their representatives at these stations," Hutchinson said.

"They've treated us in the best way possible."

But now that he's out, Hutchinson - who sailed for Team NZ in 2007 off Valencia in Spain - is all about business.

The Cup veteran is part of a group of frontline team members who have been through self-funded isolation, all up costing nearly $750,000.

American Magic's boat arrived in Auckland three weeks ago after undergoing extensive trials back in the US.

Scheduled for Sunday 9 August, this 45-mile open event is for boats in sportsboat, cruiser/racer and sport catamaran classes. It is anticipated that some 25 boats, carrying over one hundred crew, will come to the line for the 8am start in St Aubin's Bay. Once away, the fleet will head eastwards to the Violet Channel Buoy, on the south-east corner of the Island, and onwards for an anti-clockwise circumnavigation of the Island, returning to St Aubin's Bay for the finish. The leaders are expected to finish by lunchtime, given a fair breeze.

Trophies and place prizes are on offer in all classes with boats racing in the cruiser/racer classes competing for the Club's coveted Jesse Boot and Cabot Memorial trophies.

The Notice of Race and Sailing Instructions have been posted at www.rciyc.je/sailing and boats can enter by completing the form at www.eventbrite.co.uk/e/113526761600 (entries close on Wednesday 5th August).

Defending champion Nick Egnot-Johnson and his Knots Racing team, ranked 2nd in the world match racing rankings, are returning and will be looking to go back to back after a dominant victory in 2019. Egnot-Johnson and his team are itching to get back into competition after COVID-19 put a stop to their 2020 international event plans

Theland, the brand of Milk New Zealand who operate as one of the largest dairy exporters nationally, are back on board to sponsor the event for the second year in a row.

Leonard Takahashi, who has been busy in the last two years sailing for the Japanese Sail GP team and also the Japanese 49er Olympic team, is back home and has also thrown his hat into the ring, another solid entry for this year's event.

Bol is a small beautiful seaside town on the island Brač in Dalmatia, the central part of the Croatian coast. It is most known, besides being one of the few places in Croatia with constant thermal winds, by the beautiful beach the Golden Horn, shaped like an arrow whose top changes directions in line with the direction of the wind.

During the entire summer, when the weather is sunny and stable, Bol is blessed by a thermal wind called Maestral, blowing every day around 15 to 20 knots side-shore between approximately 1PM and 6PM

A very successful IRC racing yacht, the Grand Soleil 43 is also a comfortable family cruising yacht, well-mannered and simple to sail. Only a few have the carbon rig and optimised for racing as well as cruising, and JUA KALI is one of these.

In conditions where other yachts still use their engines, the sails are already set on the Y7. A displacement of only 29 tons and almost 300 square meters of sail area at wind make move the yacht even in light winds; Y7 owners don't have to worry about the perfect weather all the time.

All halyards, sheets and stretchers run hidden to the steering columns - so the helmsman can operate the Y7 alone at any time. This is not a matter of course for a 70-foot yacht and allows the owner to sail with a very small crew or even on his own.

The FAREAST 28R is a new production racing sailboat by Simonis & Voogd that delivers the excitement of One-Design (OD) racing under 30′.

The Last Word
The only thing necessary for the triumph of evil is for good men to do nothing. -- Edmund Burke