The 11th annual Wight Vodka Best Sailor's Bar search is on... VOTING IS OPEN FOR THE TOP TEN

Conditions were testing, with strong 18-25 knot south-westerlies kicking up some choppy waves under a sunny sky but the leading sailors all managed the course well. Other winners were Mara Stransky, Brody Riley, Toby Coote and Kirsten Wadley.

Laser Radial
The Women's Laser Radial class came down to a battle between two Dutch women. Maxime Yonker led the fleet after 10 races but her vastly experienced team mate, the Rio 2016 gold and London 2012 silver medallist Marit Bouwmeester, found something extra, winning the final race and the regatta.

Toby Coote was third overall and therefore won the boy's title as first Australian. It was his first major win and he said he said he was very pleased, especially considering the high quality of the fleet.

Coote improved as the regatta went on and he put that down to getting in tune with his new boat. He said he's not sure of his future plans but expects he'll soon be too big for the 4.7 and will have to move up to the men's Radial.

Kristen Wadley was first in the girl's with a very creditable seventh overall to take her fourth title in a row.

RORC Caribbean 600 - Big boat theory
For the 12th edition of the RORC Caribbean 600, 21 teams - racing yachts of 50ft (15.24m) or over - have already signed up for the 600-mile blast around 11 Caribbean Islands. The competition in all the classes will be as fierce as ever. However, history has shown that the best performer in the big boat class is likely to be rewarded with the overall win. Since the first race in 2009 overall victory under IRC for the RORC Caribbean 600 Trophy has been dominated by big boats.

Four examples of Nautor's Swan have already entered the 2020 RORC Caribbean 600, including 2009 winning skipper Adrian Lee (IRL) who will be racing his Swan 60 Lee Overlay Partners II. Swan 95 Lot 99, sailed by Jeroen Van Dooren (NED) is the largest Maxi entered to date. Race founder and long-standing RORC member John Burnie (GBR) will be taking part in his tenth race on board Lot 99. Burnie has raced on board a number of Maxis and superyachts in the race. In 2009, Burnie skippered Claude Telier's Orma 60 Region Guadeloupe to victory in the Multihull Class, setting a record that was not bettered until 2015.

New to this year's race will be GP42 Phan which has been chartered by Patrick and Catherine Keohane (GBR). The couple have raced before, but this is the first time in IRC One. The pocket rocket will be co-skippered by Catherine Keohane and performance coach Nigel King.

The team racing elite in the Optimist class will battle it out for supremacy at the Yacht Club de Monaco in the 11th Monaco Optimist Team Race (MOTR 9-12 Jan). This year, for the first time since its launch, there are 20 teams from 20 countries in competition.

An original format involving teams of 4 (4 sailors on 4 Opis) competing on equal terms in the form of duels, the round-robin phase when all teams meet each other is followed by the quarter- then semi- then finals. For all the youngsters the goal is to help their team win as many matches as possible.

Last year, four heats were organised at four venues in Xiamen, Shenzen, Suzhou and Sanya attracting 200 Chinese youngsters. At the end of each regatta, the first 12 went through to the final regatta heat held August 2019 in Sanya at the Visun Royal Yacht Club, which determined who would be heading to the Principality.

When the Australian 18 Footers League's 2019-2020 Season resumes racing on Sunday, January 12, it will be 35 years since the club celebrated its 50th Anniversary in January 1985 by staging a unique event, which produced, as it's finale, one of the most spectacular 18ft Skiff races in the sport's more than 125-year history.

There were seven races in the event. The first six races were sailed over specially designed courses on Sydney Harbour. Prizemoney for the top six placegetters in those races was $5,500.

The final race, The Ocean Challenge, was undoubtedly the highlight of the series.

With $2,000 prizemoney up-for-grabs, 19 boats lined up for the Le Mans-style start on the Pittwater side of Palm Beach.

Skippers had to run to their boats, which were being held ready by the other two crew members, sail around the Palm Beach headland, go to sea, then head south along the shoreline to the 'Heads' at the opening to Sydney Harbour.

Once inside the harbour, the 18s had to race to the finish line, which was positioned east of the Sydney Opera House.

It was the first ocean-going 18ft Skiff race ever staged and came with all the fanfare expected from such a unique contest.

Bradmill, Chesty Bond and Tia Maria were the three top skiffs of that season. Along with Anthony Scali's Nick Scali Furniture, they were the leaders as the fleet cleared Barrenjoey headland, set their spinnakers and headed south towards Sydney Harbour.

Once clear of the headland, Bradmill stayed close to the shore, Chesty Bond was further away from the shore, and Tia Maria was even further out to sea.

Windfoiling, an evolution of windsurfing, will replace the RS:X at the Paris 2024 Olympics and will be the third class to 'fly' alongside the Nacra 17 and Formula Kite.

To ensure that youth racing in the UK remains at the cutting edge of the sport, the RYA Youth Nationals will feature three foiling windsurfing fleets racing Starboard IQFoil boards.

It follows the introduction of kitefoiling, another new Olympic discipline, at the 2019 regatta, the UK's premier youth racing event.

Kitefoiling returns to the Youth Nationals in 2020 alongside the highly-contested Laser, Laser Radial, 420, Nacra 15 and 29er - all British Youth Sailing Recognised classes.

Entries are now open to the Youth Nationals, which will be hosted at Plas Heli, the Welsh National Sailing Academy and Events Centre, from April 3 to 10.

Cowes Week: Radical Changes for Cruiser Classes
Here's what you can look forward to at Cowes Week 2020

Firstly, we will be running nine IRC classes, up from eight last year, as splitting class five into two classes (which we called A and B) worked really well. It enabled us to separate out lighter-weight asymmetric boats, and the feedback from competitors on this was excellent. Knowing that in advance means it makes sense to rename the classes Zero through Nine, but it won't make a huge difference to the IRC class splits in reality.

Secondly, we are splitting the cruiser division into two entirely separate entities, to be called Performance Cruisers (4 divisions as in 2019) and Club Cruisers (2 divisions). With luck the class names give the game away! We will be making racing available for what, in essence, are two entirely different types of boats and will be encouraging people to enter the right division based on their boat type. Modern cruising boats with bulb keels and epoxy construction deserve a class of their own, as do some of the more genuine cruisers, and the two will now be able to race separately.

The new Club Cruiser division will also enable people who have not entered Cowes Week in the past to be able to do so, even if their boats really are set up for cruising most of the time.

The defenders began a crucial phase of their preparations on Wednesday, fresh off a short Christmas break.

Their 75-foot monohull has been in the shed with some work being done by the shore crew over the break with the most obvious difference being the absence of the bowsprit. 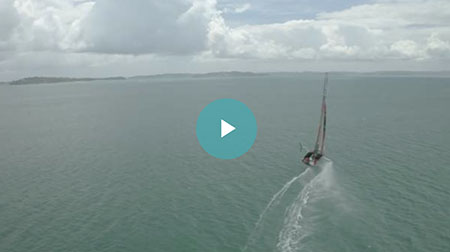 2019, an important year for the IMOCA class
New and more efficient monohulls, high intensity racing, beautiful partnerships with Iridium Communications and Thales, new program with The Ocean Race and a lot of emotions shared with all of you, thank you! Relive this season full of emotions and new things, which announce an exceptional new year with an exciting Vendee Globe!

"Emirates Team New Zealand was therefore very surprised to learn that the current stance of the Challenger of Record in relation to wind limits does not reflect the collective position of all Challengers." the statement said.

Overnight another of the so-called "Super teams", in the 36th America's Cup, Team INEOS UK, confirmed to Sail-World NZ that the comments made by NYYC American Magic CEO/Skipper, Terry Hutchinson in an interview published in The Washington Post were "factually correct".

In the interview published on Tuesday (NZT) the CEO/Skipper of the New York Yacht Club team told AP's Bernie Wilson that NYYC American Magic was unhappy to read various reports that said it and INEOS Team UK had any say in the matter of Match Conditions.

"To be crystal clear, these decisions are between the Challenger of Record and defender, and we have zero say in it,' Hutchinson told AP.

Emirates Team New Zealand appears to be claiming to have been misled by the Challenger of Record, in that the CoR have not presented a position, supported by the majority of challengers regarding wind limits.

My error is particularly egregious because I'm the webmaster for Marion to Bermuda and have done decades of website work for RBYC events. I have had family members with dementia, it's nothing to scoff at. But I don't think I've hit that milestone yet. Just aging and prone to error. Old man (kinda) yellling at clouds, etc...

LASSE was launched in August 1940 in Stubbekobing, when her hull was registered. Her story has not been fully reconstructed, but "Eva" (her original name) was given to Eva Braun by the King of Denmark during a visit before the war.

BlackPearl is frequently seen at the front of her class in the Caribbean 600, Rolex Fastnet Race and Rolex MiddleSea race to name but a few.

The Last Word
I do believe that a lot of directors, and writers, and sometimes producers just lose their edge because they haven't seen anybody or talked to anybody or been with anybody who isn't a kind of replica of themselves for a long period of time. -- Buck Henry