Porto Cervo, Italy: Azzurra secured their fourth 52 SUPER SERIES championship title today as they played out a dream scenario. On their own home club's waters in the north of Sardinia on the last day of the closest and most competitive season in the eight year history of the world's leading grand prix monohull circuit the Roemmers' family's team, which races for the Yacht Club Costa Smeralda, won the 2019 championship.

After a spirited head-to-head against Platoon, which spanned three, intense, three-race days, Azzurra clinched the 2019 title with one race to spare. Competing in perfect, champagne sailing conditions - 20 knots of northwesterly wind and sparkling September sunshine - a smart solo move on the final downwind of the second race today allowed them to finally put enough points on Harm Muller-Spreer's German-flagged rivals to finally render the emblematic YCCS crew uncatchable.

After five years on the circuit and three podium finishes, Takashi Okura's Sled also completed a dream finish to their 2019 season winning the Audi 52 SUPER SERIES Sailing Week Porto Cervo 2019 regatta title. Mr Okura's crew were in a class of their own showing remarkable speed round the whole race track, not least off the start line. They scored five back-to-back race wins over yesterday and today, a record not seen since Quantum Racing in 2013 when the level of the fleet was much lower.

After an all-but-flawless start to the regatta-a first, two seconds and a third, respectively, in the first four races-the Members Only team hit a few speed bumps and found themselves with work to do in the final race, sailed earlier today on Rhode Island Sound under bright sun and unseasonable warm temperatures.

Members Only won the final race after leading around all three turning marks. Chris Lewis' team put in a strong effort in the final race, finishing fourth, which placed them solidly in second for the regatta.

The National Championship is the final event of the inaugural summer season for the Melges IC37 class. While a fleet of privately-owned boats will head south for a winter series in Fort Lauderdale, the New York Yacht Club's fleet of 20 boats will go into a shed at New England Boatworks in Portsmouth until spring time.

-> You are a TV producer, a cameraman or an editor ?

-> You are a brand, an event, sponsor, team or venue involved in sailing ?

Make sure to submit a video for the Mirabaud Sailing Video Award.

MSVA is the world's only contest dedicated to the sport of sailing. It is a fun event aimed at celebrating the world's best TV, film and video producers and providing visibility to the brands who support sailing.

The Mirabaud Sailing Video Award is open to professional TV producers as well as sailors who film their achievements during regattas.

The videos are expected to represent the essence and excitement of the sport. They can feature any type of yachts, multihulls, dinghies, windsurf or kite boards, and can be filmed during training, before and after regattas, or in any way linked with sailing as a sport.

For more information and to submit your video: www.sailingvideoaward.com

Made By Sailors
The Greatest Race In The World
Stan Thuret

Made By Sailors
The Greatest Race In The World
Stan Thuret

Royal Cork Yacht Club: 'Where It All Began'
"Twenty-five individuals formed the Water Club of Cork on Haulbowline Island, now the RCYC, in 1720. One yacht club with 25 members," says the Royal Cork Yacht Club's present Admiral, Pat Farnan. "There are now thousands across the globe whose combined membership in clubs runs into millions, all with one thing in common, a love of yachting."

The oldest yacht club in the world will be a major focus of attention locally, nationally and even internationally this weekend when it announces the plans to celebrate its 300th anniversary - "a milestone event, a unique and special moment in the history of yachting," according to Colin Morehead, Chairman of the club's organising committee. He is currently RCYC Vice Admiral and will take over as Admiral for the commemorative year.

The Tricentenary has been given the banner slogan "Where it all began" and I have been talking to Colin Morehead about the commemorative plans which, he says, will be a great event for Cork Harbour, marking Ireland as an island nation with a maritime sport that should be seen as wanting to involve everyone.

It was another light wind day on Cannes bay and with the course area closer inshore than previously, it provided a minefield of shifts and changes under the lee of the island. The points were very close going into the day, so there was still everything to be won or lost.

However, Otto proved again to be the best boat on the water with two comfortable race wins to take the French Open by a five-point margin. After placing second for the past two years, this win marks Bent Christian Wilhelmsen's first ever regatta win in the class and he was understandably delighted.

Could the wind fill in before the 1600 CET deadline?

It did. Slowly at first. But it built gradually and by 1500 CET, the women's fleet were on the medal race course ready to race in a light 8-10 knot breeze. China's Yunxiu Lu was relatively comfortable with her lead with the real battle between silver and bronze, between Lilian de Geus and Katy Spychakov. Just two points or one board separated reigning World and European champion de Geus and the relative new-comer Spychakov.

Russian Stefania Elfutina won the race and was followed by Poland's Zofia Noceti-Klepacka in second and then Spychakov in third. Down the last reach to the finish line, Spychakov could be seen looking over her shoulder, trying to figure out where de Geus was. Fourth place crossed. Fifth place crossed with Lu. And then de Geus crossed in sixth place. Spychakov had done enough to elevate herself to silver and resign de Geus to bronze. Lu had done enough to keep her first place and is the 2019 RS:X World Champion.

Seahorse October 2019
What's in the Latest Edition Of Seahorse Magazine 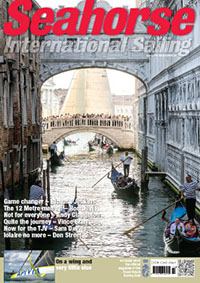 The field of play
The F50 cats are so astonishingly fast that SailGP needed to adopt new B&G technology across its chase boat and race management fleet to ensure reliable and accurate data to run the racing... at 50 knots

Old friends
When Beneteau went looking for the right designers for their very much all-new First Yacht 53 the results were thought-provoking. As is the yacht...

The regatta hosted by the Royal Yacht Squadron and sailed in 12 matched J70's saw winds rarely less than 18 knots, but team racing at the highest of global standards. Twelve teams from around the world assembled at Cowes for the three days event.

Each day saw a similar pattern of fresh breeze mounting to gale force by early afternoon resulting in racing being abandoned. Despite this the race management team delivered a full round robin, not to mention some truly memorable social events ashore.

The Global Team Racing Regatta will now move in 2020 to Italy where it will be hosted by the Yacht Club Costa Smeralda.

Bosphorus Cup at its 18th Edition
The first day of the Turkcell Platinum Bosphorus Cup has been another thrilling day in front of Istanbul citizens.

The race started in Besiktaş, very close to the Dolmabahce Palace and the boats went around the upwind mark in Anadolu Hisari, just between the two castles, built in 15th century prior to the conquest of Istanbul by the Ottomans. As usual sailors had a very joyful day.

The fierce competition was among the Farr 40 fleet, with İstanbul Cerrahi Cheese winning the first day overall ahead of Farrfara Bodrum Milta Marina and Shak Shuka.

The prize giving ceremony for the day was held at Feriye Palace. Sunday will be the second and the last day for the 18th Edition of the Bosphorus Cup.

Racing will take place between Caddebostan and the famous Princess Islands of Istanbul.

Les Voiles de Saint-Tropez: A 20-year love story!
Les Voiles de Saint-Tropez is 20! That means it's already been two whole decades since the Societe Nautique de Saint-Tropez began offering those who love beautiful sails, a rare and unique moment each year, in the run-up to autumn, devoted to the many, many delights of high-quality regattas. Lasting one week, with 300 boats, Classic and Modern craft alike, over 4,000 sailors will once again celebrate the sea as only they know how, both on land and on the water, with the same spirit of sharing and sociability initiated by Patrice de Colmont, creator of the Nioulargue, of which Les Voiles is the modern-day heir.

Year on year, the event certainly enjoys its share of fresh encounters and newcomers. Alongside Ester (1901 Mellgren design), one of the year's great 'discoveries' will obviously be the face-to-face with Sumurun, a 1914 Fife design. This absolutely exceptional 35m Marconi yawl is one of the last large Fife cruising yachts still afloat. She's just completed a remarkable two-year restoration at the Guip yard in Brest and will be putting in her very first tacks in the bay of Saint Tropez during Les Voiles.

In the gaff rig category, this year's newcomer is an amazing 120-year-old ketch rig. She is none other than the imposing 34m Nicholson design Black Swan and she will be making her debut in the waters of Saint Tropez.

AUSTRIA ONE participated in the Vendee Globe 2008 2009 with the skipper Norbert Sedlacek and arrived at 11 th from 30 started boats. There was a major refit in 2011/2012 comprising new axes and bearings for the canting keel, new bearings for the twin rudders, new Navtec standing rigging, and replacement of engine by c ompletely refit Nissan SD22, MaxProp propeller, new wiring and new electrical switches, deck painted, inspection and service of all sails. The boat is now used to participate in open races in the Adriatic and Mediterranean, and for offshore sailing.

The Rapido Trimaran's concept and construction is by the team that has built more than 1,500 production trimarans globally. It has been designed by Morrelli & Melvin as an owner-operated ocean cruising trimaran that is powerful, safe, spacious, stable, fast and fun.

Why cruise on anything other than a Rapido 60 trimaran?

Trimarans are fun because they enable you to discover places that others cannot venture to.

When the rudder blade and dagger board are retracted, the draft of the Rapido 60 is just 0.75m which facilitates shallow water navigation and anchorage.

Comfortable and spacious nets measuring 6.3m x 3m on each side of the Rapido 60 provide enormous space to play or lounge upon when the fish are not biting.

BLACK is one of the most competitive, 40 footers on the market today. Included in the package is a new 2016 rig from Hall Spars and a full 2018/19 North sails inventory. Lost of nice design features make this boat more offshore friendly than typical FAST 40 designs out there.

The Last Word
You can never get a cup of tea large enough or a book long enough to suit me. -- C.S. Lewis