For the 47 competitors, the Maxi Yacht Rolex Cup got off to a superb start today with a northwesterly that built to 20+ knots and a superb beat up the La Maddalena archipelago's 'Bomb Alley'. The 30th edition of the most prestigious maxi boat event, organised between the Yacht Club Costa Smeralda and the International Maxi Association, the World Sailing-recognised body that representing maxi boats globally, runs out of Porto Cervo until Saturday 7th September.

There was upset in the Mini Maxi Racer 1 class with neither Sir Peter Ogden's 77ft Jethou nor Dario Ferrari's Cannonball nor Hap Fauth's brand new Bella Mente prevailing, but new kids on the block - Jim Swartz's Vesper (ex-Momo). A 1-3 in today left Vesper leading, one point ahead of Cannonball with Jethou winning race two.

The rest sailed coastal courses, the Wallys and Maxi Racers on the longest at 34.5 miles, up past La Maddalena and around Spargi where they made the most of the sizable swell rolling in through the Strait of Bonifacio. Here George David's Rambler 88, was surfing down waves at 25+ knot speeds, ultimately winning under IRC despite being highest rated Maxi Racer.

In the Mini Maxi Racer 2 SuperNikka recovered from a start line touch with Peter Dubens' Frers 60 Spectre to win the day, despite owner Roberto Lacorte having jetted straight in from the FIA World Endurance Championship in Silverstone.

Robline in a nutshell…may we introduce the brand: 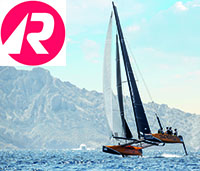 R...like Responsible
Anybody who, like Robline, plays a role at the top of the market, also has a responsibility towards society and the environment. With Robline cordage, you can rest assured that we will make our contribution together

A challenge of vintage yachts between Italy and Slovenia

From 13 to 15 September the city of Monfalcone is preparing to host the third edition of the International Hannibal Classic - Sergio Sorrentino Memorial, third stage of 2019 Adriatic AIVE Cup (Italian Association of Vintage Sails). First race on 14 September towards the Slovenian city of Portorose, returning to Monfalcone the next day. The event is organized by the Hannibal Yacht Club with the participation of the Nautical Society Laguna, the Yacht Club Marina Portorz and the patronage of the Italian Association Vele d'Epoca. Among the accompanying initiatives is the conference of the Paduan naval architect Leonardo Bortolami on the restoration of old boats.

In sailing, there's no moment like the debut of a new America's Cup rule
It's the week before Labor Day as I type this. And something that happens only rarely in our sport is about to take place. The first boats designed to a new America's Cup rule are about to be launched and take their first sails. There is no time quite like this in our sport. Since March of 2018 when version one of the AC75 Class Rule came out, the best minds in boat design, boat building, rigging and sail/soft wing design, have been creating the first America's Cup (and the World's first) 75' foiling monohulls. Before we go on, let's pause to reflect on that.

At Harken, we've been involved in the America's Cup since 1977. The boats then were 12 Meters…a class of boat that had existed since the turn of that century. They were great boats for the Cup, but there had been lots already built. And until the winged keel appeared, we thought we knew all about them. Teams and designers focused on ever-smaller areas in the rule to find any small advantage.

Next came the first AC75 rule, and it was a moment very much like right now. The first boats that were launched looked quite different from one another. Some explored the max width of the rule. Some went very narrow. The rigs were different, as were the sail shapes. I remember a boat from New Zealand was shorter than the others and much lighter. The best and brightest in the sport looked at the rule and went in different directions. In time, over 100 of those AC75s were built. Cup cycle to Cup cycle, what was fast became better and better understood and the designs coalesced toward the very narrow type form that we saw at the end.

On to the 35th Cup Match held in Bermuda in 2017. Parts of the boats and sails were supplied equipment as mandated by the rule. Said another way, those parts were identical. So at first viewing, except for the New Zealanders who were seen biking where others were grinding, the boats looked pretty similar. As it turned out, they weren't that similar around the racecourse, but what accounted for the performance difference was in the execution of the flight control.

That brings us back to today. In the next few weeks, the first of the new AC75s will splash and it will be striking. Locked in, in breeze, their tenders and coach boats may struggle to keep up. How well these boats will be managed, even by the world's best sailors, is still an open question. We've seen how seriously the teams are taking the possibility of capsize in the attention they're paying to supplemental oxygen supplies each sailor carries. We've seen them in the pools training for every possibility.

Seahorse Sailor Of The Month
This month's nominees:

RNAS Culdrose
Forty years ago more than 100 vessels took part in the ’79 Fastnet rescue, but we doubt anyone will argue with our choice of the Royal Naval Air Station Culdrose to represent all of those involved. Fifteen helicopters from Culdrose flew multiple missions that night as crews rushed back from holidays. Nineteen sailors died but 100 more were lifted off by Culdrose crews plus 65 others rescued by sea

David Askew (USA)
For several years now David and his brother {eter who campaign the Volvo 70 Wizard have been doing a sterling job on behalf of their country competing in the ocean racing classics. In 2019 they have won the RORC Caribbean 600 and Fastnet Race overall and in between showed well in this year’s Transatlantic Race from Newport to Cowes. From the Fastnet prizegiving Wizard set straight off to prepare for this year’s Middle Sea Race. Perhaps a few more US big boat racers may yet be inspired by their successes?

View all the 2019 Winners here

Sailor of the Month Hall of Fame

A victory as the D35 Trophy resumes
After the summer break, the D35 Trophy returns for three end-of-season events throughout September. The Club Nautique de Versoix has just completed its organisation of a 16th Grand Prix...in 16 years of the D35 Championship! After six races, Alinghi took the win (8pts) ahead of Ylliam-Comptoir Immobilier (14pts) and Realteam (15pts). Following were Okalys Youth Project, Cabestan and Eleven Sailing Team, tied for points (twenty-two). Zen Too closed the racing a point behind.

As highlighted by Bryan Mettraux in his interviews on social media afterwards, this win marks a faultless record for the team in the Grand Prix format so far, with Alinghi winning three from three in 2019.

At this stage of the season, Alinghi leads the trophy, three points ahead of Ylliam-Comptoir Immobilier and eight of Zen Too.

The team continues its racing next weekend with the 6th stage of the D35 circuit on the Crans-Pres-Céligny side for the Alinghi Grand Prix, which will also see the youth series of the Nacra 15 catamarans taking place.

Here is a recount of a good start I pulled off at the Governor's Cup of Western Long Island Sound. The starting line was heavily skewed with the starboard end very favored. Everyone wanted to start next to the committee boat and many boats were early trying to get there. With two boat lengths to go, we were about 10 seconds early, so were others on our leeward bow.

The red boat indicates the pre-start maneuvers SOULMATES made to win the start at the 2019 Govorner's Cup.

They bore away to keep from going over the line; but, with the line so skewed, as they turned bow down they got closer to being over early. They nearly had to make a 90-degree turn to run parallel to the line. The more they bore away, the faster they went in the wrong direction.

Instead of following the pack, I headed up toward the committee boat giving us more space to burn off the extra time. Also, by heading up into the wind, we slowed down as the clock ticked down.

Luckily, there were no other boats above us; which allowed me to turn past head to wind without fouling any boats. At the gun, we fell off onto starboard tack right at the committee boat and won the start. The boats that turned down below us ended up behind and to leeward. -- Adam Loory

GC32 Racing Tour finale at Muscat
Oman is to host the final and deciding event of the 2019 GC32 Racing Tour, especially with the Oman Air team well placed to secure the overall Tour title on home waters. Muscat will extend a warm welcome to the fleet of high-performance foiling catamarans as they race for the Oman Cup over 5-9 November. The teams will be based in and racing on the open waters off Al Mouj Marina in the heart of the city.

The Oman Air crew is currently leading the GC32 Racing Tour and overall victory for the Oman Sail-run racing team would make a spectacular contribution to the celebrations marking the organisation's 10th anniversary year.

The GC32 fleet will race on Lake Garda, Italy, next month – the fourth event of the season – before heading to the Oman Cup finale, with the destination of the Tour title likely to be in the balance right up to the last day of racing in Muscat. 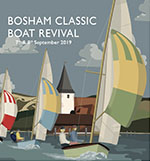 This year's 9th annual Bosham Classic Boat Revival which will be held 7-8 September and hosted by Bosham Sailing Club.

This year's event will be a series of five races over the weekend, probably using many of the existing Chichester Harbour marks rather than Olympic courses used last year: this format will allow greater flexibility in the courses set and allow sailors to see more of the harbour.

The organising team behind the Bosham Classic Revival hope to continue to play a role in revitalising the UK classic dinghy racing scene and look forward to meeting some old friends, who return year on year, and to welcoming new comers.

As well as the racing a full social programme will run in the evenings supper and on Saturday there will also be live music.

Some free accommodation has been kindly offered by some club members for visiting sailors, so visit www.classicboatrevival.co.uk for full details of the event, including the entry form and Notice of Race.

The organisers would like to thank McAfee and Pusser's Rum for their generous support for the event.

BlackPearl is frequently seen at the front of her class in the Caribbean 600, Rolex Fastnet Race and Rolex MiddleSea race to name but a few.

Less fat, more speed" was the ethos taken when designing and building KUKA LIGHT. This is a special machine, crafted by a very talented and passionate team, with a pure focus on creating a boat that delivers performance and enjoyment in equal measures, thriving in offshore conditions.