Tornado Worlds
Australia's Brett Burvill and Max Puttman are the 2019 Tornado World Champions. The Aussie pair took a win and then finished with a third place to confirm their title victory. While the score line shows a 13 point victory, the champions had to complete all ten races following a DSQ in Race 4.

In second place were Jorg Steiner and Michael Gloor of Switzerland and third on the podium Estela Jentsch and Dan Brown of Germany.

In fourth place and winners of the final championship race was double Olympic medalist Rex Sellers sailing with son Brett.

Ian Walker: The changing slate of Olympic events
In an interview with Justin Chisholm on yachtracing.life, Ian Walker, a 2-time Olympic medalist and now the Director of Racing at Britain's Royal Yachting Association, shares his views on the potential introduction of a mixed gender offshore class for Paris 2024.

If the purpose of the Olympics is to showcase the breadth of our sport to the world, that's pretty cool. So in that sense I'm quite positive. If I think about British interests, of course we absolutely want to retain the Finn, because I think we've won the last five gold medals in the Finn. And we're working incredibly hard hoping that we might go to win the next one.

I do think that in an age where humans are getting bigger generally - certainly in the developed world and I suspect across the whole world - because of improved diets, it's slightly strange that we no longer have a boat for larger men, at least.

Seahorse January 2019
What's in the Latest Edition Of Seahorse Magazine 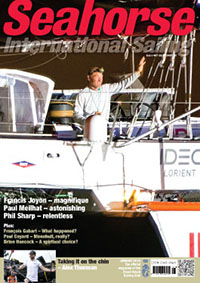 World news Some Route du Rhum... not so sweet for ALEX, but a nice future for ARMEL, an expensive lunch, rolling already for the ‘Volvo’. Plus Gary Jobson pulls it off. Patrice Carpentier, Ivor Wilkins, Blue Robinson, Chris Nicholson, Dobbs Davis

Hydrogen power... Vendee Globe?
Oyvind Bjordal talks to Phil Sharp about winning the next Vendee Globe in 2020 while saving the world

Heart of the action
Based in Nembro in northern Italy, Persico is not a normal boatyard... and they certainly do not turn out normal boats

Paul Cayard - really?
... plus not too shabby for an old fella

James Dadd - the only game in town?
... or why all that glistens really is not gold

While the interstate Rolex Sydney Hobart fleet dribbled out of Hobart, the little boat crews took over the river from January 2 - 7, enjoying reasonably consistent breeze - other than the daily transitory shutdown as the dominant south-east pressure squeezed out the morning northerlies.

New South Wales, Sail Sydney and Sail Melbourne champions in the 29er skiff, Archie Cropley and Max Paul, stormed home on an 18-20 knot Derwent River seabreeze to snatch victory from seven points down at the end the penultimate day.

Late in the game things went awry for the Tasmanian runners-up, the local pair of William Wallis and Fynn Sprott suffering a major setback with a race incident disqualification in race eight, adding to their black flag starting penalty in race nine.

He received the award due to his contribution to classic sailing through the continued success of the Classic Channel Regatta which he founded in 2005.

The award is one of three Neptune Awards, made annually by the Comité des Organisateurs de Régates Classiques in France. This also includes the classic yacht owner in the Mediterranean and the young crew of the year.

Bruce was awarded the 'Neptune de l'Armateur pour Manche-Atlantique' after a joint decision by the Yacht Club Classique based in La Rochelle and the Atlantic Yacht Club in Douarnenez. This is the first time a Neptune award has been given to a foreigner.

Bruce received the award at a dinner at the Yacht Club de France in Paris on Saturday, December 15.

There are around 100 classic yachts expected from around Britain, France, Belgium and other countries in Dartmouth.

Mark your calendars now in what is once again expected to be yet another epic, open, J/80 World Championship! Anyone and everyone are welcome to participate in one of the world's greatest venues for sailing!

Industry News
American Magic, a challenger for the 36 America's Cup, has teamed with Parker Hannifin as its official control systems partner. The two entities will work together to develop and implement systems for American Magic's racing sailboats with a focus on lifting surfaces and the wing.

"We are incredibly fortunate to have Parker on our team," Terry Hutchinson, skipper and executive director of American Magic, said in a statement. "Parker has sent world-class engineers and products to help us and they have significant experience with sailing, the marine industry and the America's Cup. Additionally, Parker's long-term relationship with Airbus, our Official Innovation Partner, will really allow American Magic to make major gains and complete our control systems puzzle."

Parker will integrate controls, hydraulics and actuators into a motion and control systems that helps the boat achieve stability as it lifts onto its foils and accelerates. Parker holds more than 8,000 patents.

Doyle Sails International is excited to announce another new loft opening in Galway to better serve the rapidly growing sailing industry in Ireland.

The loft, formerly known as West Sails, is the largest sailmaking facility in Ireland with an impressive floor area of 450 sqm. The facility is located in the Galway Docks only a 2 hour drive from Dublin and 2.5 hours from Cork. The loft will be operated by Director Donal Small and West Sails former owner and accomplished sailor Yannick Lemonnier.

Donal has spent many years working within the yachting industry from his early start in boatyards to captaining large superyachts and racing professionally.

After two-year legal battle, the Paris High Court dismissed the claims of show organiser Reed Exhibitions' in its final ruling yesterday; Reed says it will appeal

As owner of the Paris and Cannes boat shows, FIN had previously contracted with Reed to organise both shows since 1998 but terminated the contract in October 2016.

In terminating the contract, FIN sought relief from a clause in the contract allowing Reed to continue operating the Cannes Yachting Festival until 2041 in the event of cancellation for any reason. Reed countered by seeking forced application of the contract clause by the courts in November 2016, and the ensuing legal battle for control of one of the industry's most significant shows has continued since then.

In the decision issued 8 January 2019, the court ruled the key clause under dispute in the contract between the FIN and Reed was null and void and declared the contract terminated with effect from December 20, 2016. According to a statement by FIN, the Court has also expressly forbidden Reed from "presenting itself, to any parties whatsoever, as the Yachting Festival's organizer".

Berthon Boat Company in the UK has expanded its activities with the acquisition of Marine IP, which trades under the name of VersaDock, for an undisclosed sum. Berthon used its Lymington Marina Ltd subsidiary to make the purchase.

The acquisition came about after VersaDock made an approach to Lymington Marina, of which it is a tenant. VersaDock designs and creates modular floating pontoons and also represents Jetdock, which specialises in air-assisted floating docks.

"We are delighted to become part of the Berthon group of companies, which is well respected in both the commercial and leisure marine market in the UK," says Jamie Hooper, head of design and sales at VersaDock. "Berthon's wide experience should help us and I look forward to building the business up under the new ownership."

Brian May, managing director of Berthon and Lymington Marina, adds: "This is a good addition to our expanding product range, which this year has included taking on dealerships for Iguana amphibious boats, Pearl motoryachts, Gemini RIBs and Cox diesel outboard motors."

May told IBI: "We plan to continue selling VersaDock's premium products to both the commercial and leisure markets. There will be no jobs lost, but it is likely that another job will be created." He explained that VersaDock has a healthy order book. "With our balance sheet and established reach into both the leisure and commercial markets, we believe it is a symbiotic fit.

Unsurprisingly, the greatest demand in Spain continues to be for vessels up to 8m in length, representing 89.2% of the total number of registrations in 2018.

The Balearic Islands also had the largest share of registrations (28.9%) in the charter market, followed by Catalonia at 22.5% and the Valencian Community at 17%. 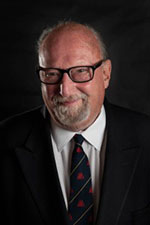 It is with deep regret that I have to inform you that Anthony Churchill passed away peacefully at his home in Ventnor yesterday morning 9th January. A member of the RORC and the ISC and RLYC, Anthony was navigator on Edward Heath's Morning Cloud during the early Admiral's Cup years. More recently he brought the ASTO Small Ships Race to Cowes having been a member of the World Ship Trust. He started sailing journals including Seahorse to add to his many other achievements which will no doubt be documented in the coming weeks.

The funeral arrangements will be announced in the near future. -- Bob Milner

Trustee of Dimbola Museum, and the World Ship Trust, he chaired the ASTO Cowes Race meant for handicapped and young who have not sailed before, and holds events for Shakespeare, Omar Khayyam, Burns, Betjeman and Elgar. He started the Ventnor Piano Fund, and is Trustee of Island Concerts, and helped fund the Sea Scout’s RIB ‘Grom’ (named after the destroyer, sister to the Cowes-built ‘Blyskawica’, renowned for ‘saving’ Cowes from enemy bombing in the war).

Anthony initiated the world’s first true Round the World Race, the Whitbread – now Volvo – race, and others such as the Financial Times Clipper Race. Racing for UK, Swiss, and Hong Kong teams, he sailed with many Olympic medallists. He helped finance an America’s Cup bid, and raced a decade on Sir Edward Heath’s Morning Clouds, winning the Sydney Hobart yacht race as navigator.

Extensively upgraded and updated example of the blisteringly fast and easy-to-sail Luca Brenta designed B38 daysailor. Huge spec and 100% ready to go.

FURTIF 2 (ex Goldfinger) is a fantastic full carbon racer built in 2002 and refitted in New Zealand by the current owner.

CONCUBINE, is without question one of the stand out boats on the Australian circuit, both in terms of performance and presentation..... A full grand-prix build and meticulous management from start to finish has got the boat to where she is today, consistently challenging for top spot at every event

The Last Word
Blind faith in your leaders, or in anything, will get you killed. -- Bruce Springsteen