Record Number Of Entries For Transpac 50
Los Angeles, California: Race managers at the Transpacific Yacht Club are pleased to announce that next July's 50th biennial edition of the 2225-mile Transpac race from Los Angeles to Honolulu has set a new record of 82 entries to date. The previous record was 80 entries 40 years ago in the 1979 edition of this classic ocean race first sailed in 1906.

The current fleet of entries is a vast assortment of offshore monohulls and multihulls, ranging in size from the 31-foot A Fond Le Girafon, Charles Devanneaux's brand new foil-equipped Beneteau Figaro 3, to Manouch Moshayedi's Bakewell-White-designed Rio100, the reigning Barn Door Trophy winner in the 2017 edition of this race. In early 2019 this fleet will be divided into several classes according to speed and boat type, along with their starting dates. The slowest boats in the fleet will start first on July 10, 2019, with additional starts planned on July 12th, July 13th and possibly a fourth start date for the very fastest monohulls and multihulls.

For Transpac 50 the fastest monohull will win the first-to-finish Barn Door Trophy, while the fastest monohull with manual sail handling systems, fixed appendages and other requirements specified in Amendment 1 of the Notice of Race will win the Merlin Trophy. This award is named for the legendary Bill Lee-designed and built 67-footer from Santa Cruz that in 1977 set a course record that stood unbroken for 20-years and helped start a new genre of fast ultra-lightweight offshore racing yachts. After Lee campaigned her on her 40th anniversary Transpac last year, and she is competing once again in Transpac 50 under the new ownership of Chip Merlin from St Petersburg, Florida.

Among the dozens of beautiful and historic trophies awarded for this race, a new one is added: the Nash Family Corinthian Trophy, which will be awarded to the fastest all-amateur crew sailing a monohull yacht in the race. Teams that want to be eligible for this award must have all crew confirmed as Group 1 sailors under the World Sailing Classification Code.

Although the breeze was light-on for the Cruising Yacht Club of Australia's (CYCA) annual Harbour stoush, the pre-cursor to the Rolex Sydney Hobart Yacht Race, the racing between these two super maxis was anything but.

"We were lucky enough to get a great start and that put us in a position to take advantage of the course," said Wild Oats XI skipper Mark Richards.

"It's always tough racing against Black Jack in lighter air and they certainly kept us on our toes. All crews did a great job on all boats out there today and we are very happy with the Line Honours [Grinders Coffee SOLAS Big Boat Challenge] win."

Behind the pair, Christian Beck's InfoTrack was slow to wind up but soon picked up pace, meanwhile Seng Huang Lee's Sun Hung Kai/Scallywag took a leg out to the western shore and seemed to be struggling. As the race wore on, however, third place became a battle of those two as they swapped third and fourth throughout the race, with InfoTrack coming from behind to claim third place.

Further back from the supers the battle was on between The Oatley Family's Wild Oats X raced by the all-female Ocean Respect Racing; Winning Appliances skippered by John Winning Jr; and Sean Langman's Naval Group. Winning Appliances got off the start smartly and was third behind the leading super maxis for the bulk of the first leg - perhaps John and John's 18-foot skiff skills came into play. Winning Appliances kept the pressure on the whole way around the course, sailed in a mostly 8-10 knot sou 'easterly, to take the Overall Win from Wild Oats XI.

"The island has come a long way since post hurricane last year," says Corr, who returns with his Aussie crew. "STIR is one of the best regattas in the Caribbean. Beautiful water, great wind and challenging courses and competition. Also, great parties with great people."

BYOB (bring your own boat) or Charter. Several companies offer yachts. One is Performance Yacht Racing (http://www.performanceyachtracing.com) with its Quokka 8, a Grand Soleil 43; EH01, a Beneteau 47.4; and Jua Kali, a Grand Soleil 43.

Register Now @ http://stthomasinternationalregatta.com Pay US $150 until January 31, 2019. Everyone is welcome! Register in CSA (Racing or Cruising); IRC; ORC; Multihull; Beach Cat or One Design classes with a minimum length of 20 feet. Register too for the Round the Rocks Race on March 21. For information, Email: , Call (340) 775-6320

Julian Dussek had previously served on Council and as a Vice President. In addition, and as a member of the Cruising Information Development Group (CIDG), he was heavily involved in the development of the CA's popular Cruising App, CAptain's Mate. He frequently lectures on behalf of the CA and has recently started to produce a video series for members who aren't able to attend the CA's London lectures.

He says his love of sailing was inspired by 'Swallows and Amazons'. Although he sailed a variety of boats owned by his father, he yearned for his own boat. For ten years prior to retirement Julian and his wife, Vanessa, sailed a Drascombe Longboat Cruiser, "all over the place". They then bought a Southerly 115 which they took down the French inland waterways to the Med where they spent six years, getting down to the bottom of Greece and up the Adriatic to Venice. They came back through the inland waterways to Calais, spent another year in the Channel and are now based in Holland.

When asked if there was anything that he would particularly like to achieve, Julian responded: "In addition to everything that is already happening, I want to focus on us achieving a greater 'outreach' for the CA; maybe we can achieve this partly by holding more events and seminars outside central London. For example, our recently held North-West Roadshow at Ellesmere Port was a great success. We also want to further develop our event video capabilities."

Franco Niggeler was presented with the RORC Transatlantic Race Trophy by Grenadian Minister for Tourism & Civil Aviation, Dr. Clarice Modeste-Curwen, M.P. at a ceremony held at Camper & Nicholsons Port Louis Marina, Grenada. Whilst several yachts are still racing, none of them can beat the time set by Kuka3 after IRC time correction.

Catherine Pourre's Earendil was presented with a RORC Decanter for the team's victory in the Class40 Division. Stephane Bry's Class40 Sirius finished the race right on cue as the prize giving started and was presented with a basket of Grenadian goods by Dr. Clarice Modeste-Curwen.

Three yachts are still to complete the RORC Transatlantic Race, with two finishers expected in Grenada today, Tuesday 11 December: Trevor Middleton's Sun Fast 3600 Black Sheep had 13.8nm to run and Arto Linnervuo's Xp-44 Xtra Staerk 31.3nm AT 0900 UTC. The First 47.7 Kali, owned by the Swiss Ocean Racing Club and skippered by Corinne Wirth who is taking part in her fourth transatlantic race, but first as skipper, are 364.9nm from the finish line.

Seahorse December 2018
What's in the Latest Edition Of Seahorse Magazine 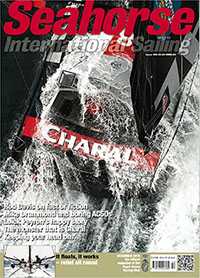 Done and dusted
That one was a battle. Rob Weiland

One for the route
Loick Peyron talks to Jocelyn Bleriot about overcoming his transat phobia...

Rod Davis - Fact from fiction
America's Cup 36... sit back and enjoy the show

18ft Skiffs 'Supercup'
Some of 18ft Skiffs past greatest sailors will make a return to the 18s on Friday, December 14, when the Australian 18 Footers League will stage the inaugural 'Supercup' on Sydney Harbour.

Among those already committed to sail in the event are several former JJ Giltinan (world) champions, past 18 footers champions Chris Nicholson, Dan Phillips, Adrienne Cahalan and Adam Beashel, as well as newcomers to the 18s, Olivia Price (Olympian) and Joe Turner (16 Footers).

The racing will commence at 5pm and comprise at least two sprint races (three, if conditions permit before sundown at 8pm).

Live streaming of each race is available on 18FootersTV

Lessons from the Boat: When Captain Serves the Crew
Captains in boating and in business alike often gain a reputation for cajoling, complaining, and yelling at their crews on a regular basis. In my experience as a leadership coach, a chief editor, and a racing sailboat skipper, that approach is rarely productive in the long term. Things work better when leaders spend less time with their mouths open and more time listening, asking questions, working out how to support their teams.

Before a race, my attention is on setting our crew up with equipment that works and enough practice to smooth out the kinks in our maneuvers. After the start, my job is to steer a steady course, listen to what others are telling me, ask for occasional tweaks to our sail trim, and communicate any major course changes ahead. Mainly, I let them get on with their jobs, including solving the occasional snafu without giving them high-volume advice or, worse, leaving the helm to try to fix the problem.

I was reminded of this when I heard about the org chart at the Marine Retailers of America Association, explained to me by its president, Matt Gruhn:

"The reality is those on the front lines have the biggest impact on us as an organization, and whatever I can do to help them is most important. We think of our org chart as an inverted pyramid. I'm at the bottom, supporting those at the top who are working on the front lines with our customers."

Full article from John Burnham in his new blog:
https://johnburnhamcoaching.files.wordpress.com

Eight Bells: Yumiko Shige
Yumiko Shige (JPN), who fought a strong battle with cancer for several years, has sadly succumbed at hospital in Karatsu City early in the morning on December 9 at 53 years.

Yumiko was extremely humble in recognizing her role as a trailblazer for sailing in Japan, making history in 1996 when, with crew Alicia Kinoshita, she won an Olympic silver medal in the 470 women event in Savannah, USA. Their achievement marked the first ever Olympic sailing medal for Japan.

Yumiko pioneered youth sailing programmes, particularly at her home base of Saga Prefecture Yacht Harbour in Karatsu, developing skills and approaches to sailing that became a benchmark. Yumiko also worked as a coach and team manager, mentoring Japan's young sailors to compete successfully at events and Championships around the world, and was Chairman of the Japanese 420 National Class Association.

Throughout the international sailing scene Yumiko was a friend to many and touched many lives. She will be remembered as one of Japan's sailing legends, and while her passing leaves a big void, her legacy will live on. Yumiko's funeral will be held on December 13, 2018.

Another successful collaboration between Germán Frers and Nautor, the Swan 90S 'Alix' is the quintessential performance cruiser combining elegant and powerful lines with Finnish quality to achieve an aggressive beauty.

The Swan 48 is an evergreen classic. Designed by S&S and built as Nautor can, she offers sparkling sailing together with build quality that is never to be repeated. Perfect for serious cruising, these yachts also shine in the Regatta circuit and are rare to the brokerage market.

AURORA is now for sale with an incredible asking price. Formally known as BLUE YANKEE, AURORA still possesses all that is needed to win anywhere in the world. Many new upgrades, along with the simple design aspects that has made this boat a winner year in and year out. Call for her details

The Last Word
Love is our true destiny. We do not find the meaning of life by ourselves alone - we find it with another. -- Thomas Merton