World Sailing Annual Conference
Sarasota, Florida, USA: Keelboat and offshore are some of the most popular avenues of the sport, with historical events continuing traditions and new ones being introduced or evolved, there is an ever-changing landscape. A leading cast of influencers within the community presented at the three hour open forum.

Ser Miang is now an Executive Committee member of the International Olympic Committee.

This lifts the mis-management and misinformation of the 2024 Sailing Olympic Events and Equipment to a new and very serious level, as it clearly has a level of visibility within the IOC which had not previously been confirmed.

As previously reported the World Sailing Submission proposed a Mixed Gender Doublehanded Keelboat, non-foiling and 6-10metres long to be sailed in an event format yet to be defined and in a class which it was hoped to get sponsored.

" During the midyear meeting in May this year, the World Sailing Council received more than 60 submissions on the 2024 Olympic events, 13 of them were debated on and after prolong process and 7 rounds of voting it took a decision. Now, barely 5 months later the World Sailing Board decided that one of the event cannot work and is proposing to change that. What sort of process is this? lack of leadership? cherry picking? commercial interests manipulation?

A mixed two person keelboat offshore event that will go on for 48 hours? a liberal interpretation of Regulation 23? the reasons given in this submission paper are pretty strange. "

Former Finn Class President Philippe Rogge's Comments
The World Sailing Board apparently no longer has confidence in its 'mixed singlehander' event for 2024 and instead presents a 'mixed keel boat' offshore event. Interestingly this group of experienced sailors seems to have no concerns about mixed kiting events.

Unlike previous Olympic keel boats, which were 'somewhat less' physical and extended our stars' Olympic careers, this 'one female and one male' keelboat would require it to be much less physical and weight sensitive, at least if we wanted our athletes to look like Olympic athletes or introduce weight limits.

The real problem however is the 'offshore' part of this event, which seems completely devoid of any realistic chance for Olympic inclusion. Olympic Games require unprecedented levels of security for the threats they attract and securing an Olympic offshore event seems inconceivable, short of being piloted by military vessels.

Also, there is event length in the era of YouTube and snack byte media demands. The dinghy sailing races have been shortened at the Olympic level from 3 hour races to 45-75 minutes for this exact reason over the last 6-7 Olympiads.

There is equally plenty of evidence of the 'supplied Olympic equipment keeps it cost attractive to many nations' fallacy as every aspiring nation would have to buy several... to be competitive.

The prospect (or more) of financial incentives for a manufacturer to 'supply' for the French Olympics may have played here as a life jacket to World Sailing's financials.

Not to mention the bold and seemingly "all-in" (some would say vindictive) move to blatantly challenge the anti-trust compliance of this slate by adding another monopoly.

We'll see what happens... but that this was coming, should have been clear to anyone reading the President's June newsletter, in which he was reporting on the outcome of the Mid Year meeting, which had just voted down an offshore event.

To remain in line with the Regulations, this proposal would require 75% of votes to approve. Let's count on our representatives at the Annual General Meeting.

Participate in this exhilarating one day race and circumnavigate the entire island before the official Antigua Sailing Week series commences. This event is a challenging warm up to the variety of race courses competitors will encounter later in the week.

We encourage yachtsmen to take on the challenge of breaking the existing Peters & May Round Antigua Race mono-hull elapsed time record, currently set in 2018 by the Americans on Warrior, the modified Volvo 70, in elapsed time of 3 hrs 55 mins 38 seconds.

The Peters & May Round Antigua Race will be followed by an awards presentation which kicks off the official opening of the 52nd edition of Antigua Sailing Week. 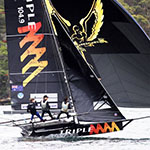 In a fading SSE breeze, the Finport Trade Finance team of Keagan York, Matt Stenta and Charlie Gundy hung on to win a heart-stopping Race 1 of the Australian 18 Footers League Club Championship on Sydney Harbour today.

After leading by 1m20s with only two legs of the course to sail, Finport had to desperately hold off the challenge by the Bing Lee team of Micah Lane, Dan Phillips and Nathan Edwards to take the victory by just 6s.

The pair totally dominated the latter half of the race, leaving the third placed Smeg (Dave O'Connor, Ricky Bridge and Mike McKensey) a further 3m48s back.

With one lap of the course still to sail, the race was already a 2-boat affair between Finport and Bing Lee.

Finport's margin was more than one minute over Bing Lee, and the Finport team extended it to 1m20 at the Shark Island YA mark in Rose Bay.

Bing Lee had superior speed down the final spinnaker run from Rose Bay to Athol Bay and the lead had diminished to only 30s as the pair headed back across the harbour to the finish line off Clark Island.

The now very light winds put pressure on both teams, but most of the problems came when the skiffs had to pick their way through the Manly feries, which greatly affected the breeze of both teams.

It was only when both skiffs were less than 100 metres from the finish line that the winner was confirmed as Finport Trade Finance held on for the narrow victory.

Race 3 of the Spring Championship was held in conjunction with the Club Championship, and this resulted in a win for the Bing Lee team. Finport and Rag & Famish share the lead in that series with a total of nine points

Race 4 of the Spring Championship will be sailed next Sunday. -- Frank Quealey, Australian 18 Footers League 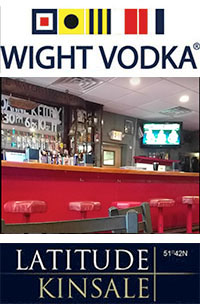 Our tenth annual competition now open for stories about your favourite bar and drink recipe submissions.

Here's what makes it so great...
Anyone connected--owner to bottom painter-- with boats eats and drinks here, side by side.

ALL of their drinks are weapons grade!

Our contest holds a special prize for the winner. Not only will the establishment receive an award plaque and a bottle of Wight Vodka, they'll also win a custom made 3D chart of their locale from Latitude Kinsale. Framed in one of their exclusive frames incorporating Surround Lighting™ and mounted on carbon fibre. Value €2000.

Tell us all about YOUR favourite sailor's bar: scuttlebutteurope.com/sailors-bar

Looking back at this year's Nations Trophy Mediterranean League series, it's clear that ClubSwan's big idea of injecting friendly patriotic rivalry into one-design racing is making headway… and there's more to come

It was a bold move and it seems to be working. Leonardo Ferragamo and Enrico Chieffi's big idea – to rekindle the Corinthian spirit and the intense, but gentlemanly competition between nations, of classic regattas such as the Admiral's Cup and Sardinia Cup, in a carefully managed one-design format, propelled by the powerful brand values of Nautor's Swan – is steadily gathering momentum. The inaugural edition of ClubSwan's biennial tournament, The Nations Trophy, in Palma last autumn was, by all accounts, a very promising start, with close competition in all three one-design classes, ClubSwan 50, Swan 45 and ClubSwan 42, and a total of 28 yachts representing 11 nations.

This season's follow-up series, The Nations Trophy Mediterranean League, has built on that success, enabling owners and crew, as Chieffi says, 'to maintain the intensity of competition and friendly rivalry witnessed last October in Palma'.

The four-part Mediterranean League series kicked off in March with Monaco Swan One Design, where competitive fleets representing eight nations battled it out over four days of inshore windward-leeward racing in a challenging range of conditions that varied from light and fluky to a spanking strong breeze.

Full article in the November issue of Seahorse

Designed to increase rivalry and enhance the overall racing experience, the League will now include the Melges 14, Melges 20 and Melges 32. The Melges 14 World League will feature seven championship-level regattas across North America and Europe.

Charters are available for all of the Melges 14 World League events. Connect with the Melges Team or a Melges Dealer to learn more.

Six months of competition culminated in the Final, and the top eight eSailors from five countries took to the podium, aiming to be crowned World Champion.

After three qualification races, the eight eSailors were whittled down to six. These six went on to battle it out in the Final in a virtual Sydney Harbour on the J/70, a popular worldwide keelboat.

Occasionally a jewel of a yacht is built. Coal Ila should be seen and sailed to truly appreciate her exquisite detail and thrilling performance. Simplistic arrangement allows for short handed sailing, as well as competitive fully crewed racing. Lifting keel arrangement, really ticks the boxes.

AURORA is now for sale with an incredible asking price. Formally known as BLUE YANKEE, AURORA still possesses all that is needed to win anywhere in the world. Many new upgrades, along with the simple design aspects that has made this boat a winner year in and year out. Call for her details

The Last Word
All photographs are accurate. None of them is the truth. -- Richard Avedon