Etchells World Championship
There was more breeze this morning than there was this afternoon on Moreton Bay in Brisbane. This was great news, for it meant that after just a short stay ashore, the 2018 Etchells World Championship Race Committee sent the 94 boat fleet out for racing, and it looked like there was more than a great chance of getting two races in. Opting for the shorter Course Two, which is two complete windward returns, also set it up beautifully.

A total of four races sailed so far.

Antigua to Bermuda Start : May 8, 2019
Hamilton, Bermuda: October 23, 2018: The Royal Bermuda Yacht Club announces that the third edition of the Antigua Bermuda Race will start on the May 8, 2019 and will be part of the 2019 Atlantic Ocean Racing Series (AORS).

"The TR 2019 committee unanimously thinks adding the Antigua Bermuda Race to the AORS is a splendid idea and should benefit all the races included. We are very excited about the enhancement to the series." commented Co-chair Patti Young.

The 935-mile Antigua Bermuda Race is organized in association with Antigua Sailing Week and is supported by the Bermuda Tourism Authority. Yachts of 40ft and over will be racing under the IRC Rating Rule, MOCRA and the CSA Racing Rule, with the latter amended to permit boats to use their engines, subject to a time penalty. The Royal Bermuda Yacht Club, with many years experience hosting the Newport Bermuda Race, will guarantee a fantastic welcome and a great party.

"We are delighted to be part of Atlantic Ocean Racing Series, alongside such prestigious races," commented Antigua Bermuda Race Chair, Les Crane. "As part of the AORS we hope to attract many of the competitors for the series to race with us to Bermuda. At the end of the Caribbean Season, Bermuda is en route for yachts heading to North America, and for those crossing the Atlantic. The Antigua Bermuda Race is the perfect way to give purpose and safety to many yachts that will be plying the route. This is exactly the result we planned for when we started the race in 2017."

The 2019 Antigua Bermuda Race will start on May 8, 2019, five days after the 52nd edition of Antigua Sailing Week. There will be a crew party for all participants the day before departure and a Prize Giving at the Royal Bermuda Yacht Club on May 16, 2019. Some exciting full boat race charters and head charters are available via the web site.

... or why racing in the giant Spi Ouest regatta in La Trinite is quite simply the best Easter present you can possibly imagine

Boats are based in La Trinite-sur- Mer and racing takes place in the splendid surroundings of the Quiberon Bay in southern Brittany. The islands of Belle Ile, Houat and Hoedic offer shelter and also spectacular scenery for coastal races. Lorient is only 15 miles to the north, which means the regatta attracts the cream of French offshore racing sailors who are based there. The beautiful scenery, consistent winds, and top level competition of Spi Ouest are a hard combination to beat.

The regatta is organised by the Societe Nautique de La Trinite-sur- Mer (SNT). The club is undergoing a rejuvenation at present under the stewardship of its ambitious president, Antoine Croyère.

Full story in the November issue of Seahorse

The 23-metre (75ft) vessel, thought to be ancient Greek, was discovered with its mast, rudders and rowing benches all present and correct just over a mile below the surface. A lack of oxygen at that depth preserved it, the researchers said.

"A ship surviving intact from the classical world, lying in over 2km of water, is something I would never have believed possible," said Professor Jon Adams, the principal investigator with the Black Sea Maritime Archaeology Project (MAP), the team that made the find. "This will change our understanding of shipbuilding and seafaring in the ancient world."

The ship is believed to have been a trading vessel of a type that researchers say has only previously been seen "on the side of ancient Greek pottery such as the 'Siren Vase' in the British Museum".

Full story in The Guardian: www.theguardian.com

Another dose of R(h)um for Louis Burton
With ten days to go to the start of the Route du Rhum-Destination Guadeloupe, twenty IMOCAs are moored up in Saint-Malo in the Duguay-Trouin dock. Among them, the local contender, Louis Burton's Bureau Vallee 2. At the age of 33, the sailor, who now lives in Saint-Malo, is getting ready to set sail in theRoute du Rhum for the third time, his second on an IMOCA. Previously an outsider, Louis now has a lot of experience and a boat that allows him to be up there with the leaders. We met up with him to find out more.

Louis, how do you feel about the final ten days of preparation on your home turf?
"It's very encouraging to see all the Route du Rhum competitors coming here to Saint-Malo. We feel like we're in the middle of the celebrations. The fact that we're right by our premises is a real advantage in terms of logistics. It is easy for us to complete the preparation of the boat and we really feel at home here. I'm going to be able to stay at home until the day of the start. That is an ideal way to get some rest and calmly finish my physical and mental preparation."

The delivery trip to the Route du Rhum pontoon wasn't that long...
"You're right. It was pretty simple! We are based in the same dock, so we didn't even need to worry about going through the harbour gates."

Why is this event so special for you?
"My first attempt at the Route du Rhum in Class40 in 2010, was the trigger to my life changing. That was my first transatlantic crossing, and indeed my first solo race. I didn't have any sponsor, and the project was set up very quickly with the support of those my around me. I finally met my sponsor, Bureau Vallee, a month before the start, so it was at the last minute. It was the start of a fantastic story...That was also when I first met the lady who would become my wife..." "I feel I am in control of the boat when alone"

1. Best story about why a particular bar is the best in the world. Stories like "I met both my husbands here", "I never knew that there were that many different burgees in the world, let alone at a single establishment", and "A place lost in time, when you walk in it could be 1930 or 2017" will weigh heavily in our decision.

2. Drink recipe created at, or at the very least, SERIOUSLY promoted at, said establishment. Full instructions and ingredients please, so that we can all conduct serious research on the subject as the days (in the northern hemisphere) grow shorter and darker.

Thoughts, prayers and recipes to: scuttlebutteurope.com/sailors-bars

Seahorse November 2018
What's in the Latest Edition Of Seahorse Magazine 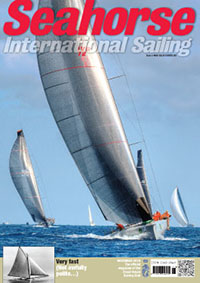 Keep moving
Swiss-based Carbo-Link has long been one of the quiet giants of high performance sailing... It is only now, many years after they rigged their first America's Cup winner for Alinghi that word is getting out at last

Hydraulics engineered for high performance
Whether in the Ultim, TP52 or America's Cup classes, next-generation Harken hydraulics are at the very leading edge of efficiency and reliability

IMA - Rationalisation
... aka a Maxi sort out. Andrew Mccirvine

RORC news - Tough gig
Horace back on the podium - you'll not keep such a top man down. Eddie Warden-Owen

From the back mark of the 3-buoys race, Finport Trade Finance (Keagan York, Matt Stenta and Charlie Gundy) came strongly through the fleet to finish in second place.

The breeze was around 10-15-knots but patchy, and the fleet had to battle hard, particularly on the tight reaches.

Race 3 of the Spring Championship will be sailed next Sunday. -- Frank Quealey, Australian 18 Footers League

Nocher Crowned at KiteFoil World Series Final as Parlier Takes Sardinia Grand Slam
Monaco's Maxime Nocher trumpeted his comeback when he lifted the KiteFoil world champion's crown after a stuttering World Series final fought out on the Italian resort island of Sardinia. Nocher added to his haul of world titles at the climax of the three-stop International Kiteboarding Association (IKA) KiteFoil World Series, with a second podium spot at the Sardinia Kiteboard Grand Slam earned him the tour's best overall racer.

The three-times Formula Kite world champion was bested at the series-closing Sardinia event by his rival, France's Nico Parlier. He took the win and a share of the €20,000 prize money at the five-day competition dogged by fickle breezes.

Britain's Guy Bridge took a bullet with superlative racing in the only race of the final day on the track off Cagliari's Poetto Beach, leaving both Nocher and Parlier in his wake in the smooth waters under the Sella del Diavolo (Devil's Saddle) promontory.

The British teenager notched up two bullets, but a critical lack of wind throughout the four days of competition that allowed just four races in all meant that he was unable to discard a poor early score for a disqualification for a tangle. Fellow countryman Connor Bainbridge finished the Sardinia finale in the fourth spot just behind Germany's Florian Gruber.

The women's KiteFoil World Series title was taken by Kirstyn O'Brien (USA), after she alone competed at all three stops, ahead of Daniela Moroz (USA) and Elena Kalinina (RUS). The late cancellation of the planned final in Oman meant racers could not discard a score from any event.

Emika is a flush deck version of the Swan 62 and has just been introduced to the brokerage market for the first time. Since delivery in 2004, she has been used for private family cruising and based in the South of France with the occasional winter in the Caribbean.

Affair is a ClubSwan 42 built in 2007. The ClubSwan 42 proved herself on the race course winning the ORC World Championship 2015 in Barcelona with other CS 42s in 2nd and 4th place.

Iconic blue-hulled full custom Baltic 83. Completely refitted in 2006 and beautifully maintained ever since. Huge value for money for such a special and well-constructed yacht. Over 100 new photos (July 2018) available

The Last Word
I try to bring out the subversive side of people. -- V. Vale