Kicking off in February 2019, SailGP's inaugural season will feature teams representing six countries - Australia, China, France, Great Britain, Japan and the United States. Each five-person crew will race on identical 50-foot foiling catamarans. A new boat class, the F50 is a redesigned, supercharged incarnation of the exceptional AC50 used for the 35th America's Cup last year. Twelve months in development at the hands of pioneering technicians and engineers at Core Builders Composites in New Zealand, the F50s are expected to break the 50-knot (60mph/100kph) barrier.

Sanctioned by World Sailing, each grand prix will comprise two competition days with five fleet races, culminating in a final match race between the two leaders. After SailGP's Sydney inauguration in February (15-16), the league moves on to San Francisco in May (4-5), New York in June (21-22), and Cowes in August (10-11), before the Marseille final in September (20-22), which features a winner-takes-all, $1 million championship match race between the season's top two teams to conclude three days of racing.

International Schooner Association founded
The grace, power and complexity of classic schooners engenders great passion in all who see these wonderful examples of naval architecture, mostly heralding from that golden age of yacht construction in the first decades of the 20th century. In recent years many of these yachts have been beautifully restored, or replicas have been built, with painstaking attention to historical detail and with no expense spared.

These yachts have been taking part at classic yacht regattas, but here they face the difficulty of having very different sailing characteristics compared with other classic yachts. This leaves them at a disadvantage under most current rating systems.

On the night of 28 September a reception and dinner were held by de Vargas Machuca aboard his yacht Puritan attended by owners or representatives of 12 schooners in order to launch the new Association.

The articles were presented and signed. Ten schooner owners are fully committed, while others have so far expressed strong interest.

The ten founder members of the International Schooner Association are the owners of:

The intention is for the Association to run events specifically and exclusively for classic schooners. The hope will be to build a programme and a series such that, as well as individual regatta prizes, there can be an annual perpetual trophy awarded to the 'Schooner of the Year'.

Plans are already afoot for the first event to be held by the International Schooner Association in Capri next spring.

The St. Maarten Heineken Regatta is four amazing days of world-class racing in idyllic conditions appealing to a broad range of tastes. The Event, set in the crystal-clear waters of the Caribbean and powered by the cooling northeast trade winds is powered by an experienced, innovative and friendly race team. Our professional Race Committee provides custom-tailored racing for the thousands of sailors originating from the 32+ countries that come to race: from Olympic medalists and World Champions sailing Maxis and Performance Multihulls to holiday-makers on chartered Bareboats.

For the 2019 edition, there will be four days of Serious Racing, counting towards the overall result. Participants will be offered a mixture of races with a combination of windward-leeward and coastal races, blended together into an irresistible cocktail of racing chosen to suit each class. The all-out racing monohulls will savor the prospect of eight races over four days with windward-leeward races on two days and two longer coastal races testing both boat handling and tactics. It's easy to understand why the regatta attracts a large competitive class of 40ft and 50ft cruiser-racers.

With Heineken as a long-standing sponsor, the event's shore side parties are exceptional! Sample the local cuisine, offered by several famous, local restaurants at the Regatta Village before you make your way to the center stage and take in the sweet tunes of international & Caribbean artists. The St Maarten Heineken Regatta parties are legendary and make for everlasting memories on the "Friendly Island"!

Kiwis claim victory at Qingdao Mazarin Cup
The Kiwi Flying Phantom team, Hamilton Huas, helmed by Isaac McHardie and crewed by Tokyo 2020 hopeful Micah Wilkinson, will go down in history as the winner of the first ever Flying Phantom event in China and the Far East.

Taking part in the Qingdao Mazarin Cup powered by Extreme Sailing Series, an event organised by OC Sport and the Qingdao Administration Center for Sailing Sport, to mark the tenth anniversary of the 2008 Beijing Olympic Games, the New Zealand duo shone on the water, exhibiting exemplary sailing straight off the mark.

Although sailing was stalled by strong winds on the first day of the event, the Kiwis kept the rest of the twelve-strong international fleet of one design foiling catamarans at bay with flawless boat handling. The penultimate day saw them score wins in every single race, moving into the finale with an impressive 18-point lead on the chasing French team, Culture Foil.

After claiming victory in last year's European Trophy Award, the performance objective for 2018 was simple - to defend the title. The growth of the Class with four new boats launched just this year has added to the already fiercely competitive fleet, making the award all the more exceptional for the Energy Challenge team.

"This season we've raced 4,200nm and three out of the four races were different from the last couple of seasons providing some new and interesting challenges. The intensity of the racing has been a great reference for boat speed and this year we have really focused on advancing performance and the efficiency of systems, which have been good to see take effect throughout the season."

Less than five weeks now remain until the start of this year's big ocean race, the single-handed Route du Rhum starting on the 4th of November from St Malo, France and finishing in Guadeloupe, Caribbean. Track the race and follow Phil's story on social media and on the team website at www.philsharpracing.com

The 2018 ORC European Championship featured racing for 3 class categories, with the prestigious titles to be decided in a mix of eight offshore and inshore races around the scenic waters off the coastline of Limassol. Over 35 entries from eight nations competed over five days of demanding competition on one of the Mediterranean's most stunning race tracks.

The two teams from Estonia - Mati Sepp's Technonicol in Class AB and Aivar Tuulberg's Katariina II in Class C - both sailed extremely well all week and were assured of overall victory.

For more information and the final results from the 2018 ORC European Championship, visit the event website at european2018.orc.org

Guido Gallinaro will turn 18 when he is competing in Nassau this December - the youngest skipper to ever have sailed the SSL Finals. He will be with German crew Kilian Weise, a 23-year-old 'up and coming' Star sailor who finished third at the 2018 Eastern Championship in Trieste in May.

Ondrej Teply will try to have a different approach, and think as all of the rock stars on the starting line as just 'people' he says: "I was really hoping to receive the invitation as the former U23 Finn World Champion received it (Oskari Muhonen FIN), and I am thrilled about it, about racing against the stars of sailing. I know some of them: Scheidt was coaching Zarif in the Finn this year, so I got to meet him, but it will be amazing to race against him and all of the others. I will sail with Greek crew Antonis Tsotras, who is 28 and attended the London Olympics in 2012 with skipper Emilios Papathanasiou. We know each other already as I train in Athens in winter time, and we get along well." 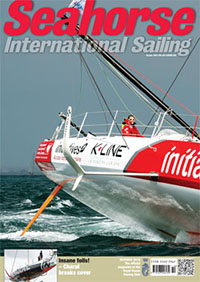 Gone with a whoosh.
Ingrid Abery Not bad
Topsy-turvy in Cascais. Rob Weiland Mouthwatering
The possibilities are endless but whatever the details it won't be boring. We asked our former editor to dig into the 'Volvo' race's nuptials with Imoca. Marcus Hutchinson, Johan Salen and Antoine Mermod Bespoke
And in all sizes... At the same time as making ever bigger inroads into the sharp end of the superyacht and grand prix fleets, Doyle One Design continue to knock it out the park in classes like the J/70 and Etchells The bare facts
Veteran America's Cup technical director Andy Claughton strips away the froth...

The Wynyard Edge Alliance is the group responsible for delivery of the overall project and infrastructure for the 36th America's Cup Regatta. The Panuku Development, as the Consent holder, is responsible for holding a Community Liaison Group meeting every month. The members of the Community Liaison Group are parties who were involved in the Environment Court process leading to the granting of the Resource Consent for the development of the bases and infrastructure.

The purpose of the meetings is to keep the parties updated as to what is planned and to get feedback and issues arising during the construction process.

Superyacht Cup Palma returns for its 23rd edition in 2019
The 23rd running of Europe's largest and longest-running superyacht regatta, The Superyacht Cup Palma, will be held on Palma Bay, Mallorca, from 19-22 June 2019, the annual gathering again set to be a magnet attracting yacht owners, their friends, captains, crews and sponsors to the idyllic setting both on and off the water.

The 2018 event reunited old friends and rivals along with several newcomers among the 17-strong fleet, with the final outcome of the Superyacht Cup in the balance until the final moments of competition.

An absorbing last day on the water ended with two very different yachts tied on points for the overall trophy, with the venerable J Class yacht Velsheda edging out the record-breaking Class B super-ketch Mari-Cha III on countback.

With racing across four classes several other magnificent superyachts also got a share of the limelight.

Another ketch, Q, emerged as winner of the newly added non-spinnaker Corinthian Class.

Stay posted for the Notice of Race in December and entries opening in January - all information here: www.thesuperyachtcup.com

"An opportunity to learn, for the first time, from industry experts, all about the design approach and technical content that will drive the 36th America's Cup, with a focus also on the themes of sustainability and efficiency. "

Quite obviously adored Swan 56 from 1998. Continuously maintained and polished to the enth. She has an excellent sail package/electronics and of course, the carbon rig, all a huge plus for this Swan.

Using the FUJI COLOUR trimaran moulds for her construction, Francis JOYON built this fast trimaran and won the 2000 OSTAR EUROPE 1 Race. After her race life, she received a lot of improvements to make her to handle as a fast cruising trimaran but without losing her fantastic potential.

The Last Word
I met Kafka and he jumped over a building to get away from me. -- Peter Orlovsky