The 2018 World Cup Series Enoshima is the first to be held on the Tokyo 2020 Olympic Sailing Competition field of play, and competitors who have succeeded on Olympic waters ahead of the Games often achieve glory come showtime.

Out of the 466 sailors from 44 nations, the World Champions crowned in Aarhus have come to the forefront once again, suggesting that their talents and racing know-how can be seemingly transferred from one venue to the next.

Racing continues at 11:40 on Wednesday 12 September.

Top three by class after day one:

Mati Sepp's modified X-41 Technonicol dominated both races today in Class AB, winning the first race by a whopping 4:13 over runner-up Maestro, Oleg Stashkevych's XP 44 all-amateur Corinthian team from Ukraine, and the second by a closer 1:49 margin over Mikhail Kdetov's Skif 42 St Anna from Russia. These second-place results were the best thusfar for both Maestro and St Anna, but the overall runner-up in the Class AB standings is Tomas Dolezal and Radim Parizek's Czech team on their Swan 42 Daring Sisters, who is actually tied in points with Easy Swisha's X-41 Next from Israel.

In Class C another Estonian team - Aivar Tuulberg's Cossutti-designed Katariina II - had a quite reasonable day with scores of 1-2 to maintain their lead, but the margins are tight: in today's second race they lost by a mere 22 seconds to Rudolf Vrestal's Italia 9.98 Giulia, and this team from the Czech Republic is only 3 points back in the overall standings. 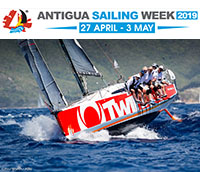 In view of the ever growing demand for double-handed racing, the organisers of Antigua Sailing Week (ASW) are pleased to announce 2019 will benefit from the addition of a new double-handed class. Double-handed racing by its nature is all about crew stamina and how to pace yourself. With only two crew on board, both must be good all-rounders and understand the trade-off between pace, performance and physical demands.

Race manager Lorna Saunders says, "This will add an exciting new dimension to ASW. Safety being paramount, the double handed class will have its own start and courses will be carefully planned to accommodate double handed participants. The courses will be a mix of round the cans, with slightly longer legs and some days a coastal race. We look forward to thrilling, competitive sailing."

Antigua Sailing Week takes place from 28 April to 3 May and the Notice of Race is now available. An optional Round Antigua Race takes place on the 27 April, which will also offer a double handed class, and is the perfect warm up event prior to the five challenging days of Antigua Sailing Week where everyone is invited to race, chase and celebrate.

The professional race management team will continue to offer exciting racing for participants who range from fully professional campaigns to crews of family and friends.

Bareboat and mothership charters can all be arranged through our sponsor Dream Yacht Charter plus numerous race charter options are available from reputable partners.

Post-race daily prize-givings and an exciting week-long social calendar including the 10th edition of Reggae in the Park, the mid-week Lay Day Beach Party and the prestigious Final Awards Ceremony are key events on the must do list during the week.

Register to join us for 2019 or get more information at www.sailingweek.com .

Over one third of the teams competing at the 2018 Resolute Cup have "junior" sailors under the age of 25 on board, in contrast to the nationwide struggle to attract and engage sailors 25 years of age or younger. In total, there are 15 junior sailors racing in the Resolute Cup. Our featured teams include Chicago Yacht Club, which registered with three U-25 sailors and helmed by 24-year-old Will Holz, American Yacht Club helmed by 22-year-old Walter Florio, and Fort Worth Yacht Club represented by our youngest sailor, 14-year-old Max Nilsson.

This year's yacht club teams hail from 13 total states. There are multiple teams from New York, California, Massachusetts, and Texas. Club Nautico de San Juan has traveled from Puerto Rico to make their first appearance in the Resolute Cup and the first appearance from a club based outside the contiguous United States.

Figaro Stage Three Finish Imminent
The leader at Tuesday midday Sebastien Simon has nearly one quarter of a mile of a margin as he rounded the Perrins Chien mark ahead around 0430hrs French time this morning. Winds are only light at Port Joinville on the Isle d'Yeu. Simon lead the group out to the east after Cape Ortegal and has always been among the pacemakers of the top skippers who chose that option.

Ireland's Tom Dolan is hanging on to 11th place at two miles behind Simon as top rookie with half a mile in hand over Thomas Cardrin the second rookie on the water.

Britain's Nick Cherry has slipped to 18th at three miles back. The final section to the finish should be relatively straightforward in a N'ly breeze with the winner expected on the finish at Saint Gilles Croix de Vie at around 0730hrs local time.

Back In Nassau for the SSL Finals in December
The plan for the sixth edition of the Star Sailors League's most important event will be the same as previous SSL Finals, a four day long Qualification Series after which the top 10 teams will progress to the final knock-out stage of the competition. Top team from the knock-out stage progresses directly to the Final, while the runner-up goes to the semi-finals. Teams from 3rd to 10th in the Qualification Series have to fight in yet one more race in the Quarter Finals. The last rounds will all happen on the last day of competition, Saturday December 8th, and in the late afternoon the winners of the SSL Finals 2018 will be crowned directly after racing at Nassau Yacht Club.

Ten spots are automatically allocated to the top 10 skippers in the Star Sailors League Rankings. The Rankings are currently based on events in the Star class with the intention of adding more classes to it in the future.

There are no races now that can alter the top 10 positions in the Rankings from now to the second Tuesday of September, traditionally the date in which results are frozen for the SSL Finals.

The remaining 15 places are invited positions going to young talented sailors, VIPs who have made significant achievements within their area of the sport or the winner of the Star World Championship, which this year will take place from October 7th to the 14th in Oxford, Maryland, USA.

The top 10 skippers from the SSL Rankings who have been invited to the Star Sailors League Finals 2018 are:

All of them have confirmed their attendance with the exception of Paul Goodison - who is waiting for approval from his America's Cup team, American Magic. All of them will be sailing with the best crews in the business.

The action will be streamed LIVE on the Internet with expert commentary from special studio guests. On the water, the latest in hi-tech camera technology, as well as Virtual Eye 3D Graphics, will provide thrilling viewing. Armchair sailors can also join the race with Virtual Regatta.

Seahorse September 2018
What's in the Latest Edition Of Seahorse Magazine 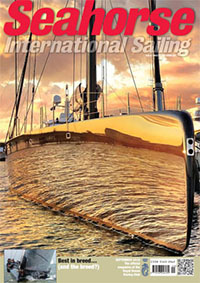 World news
And (some of) the Cup has already come home. Plus going a long way (in every sense) in a short space of time with Kyle Langford and the New York YC's 'other' big campaign... Ivor Wilkins, Blue Robinson And Dobbs Davis

No place for wimps
Kris Kristofferson

But first a new yard
Before ordering the first roll of pre-preg for the latest Fast40+ Rán there was the small matter of building a boatyard. Jason Carrington

The Races were originally planned for the 25th May 2020 but will now start on Sunday 10th May in Plymouth Sound.

In 2020 The Royal Western Yacht Club will be celebrating the 60 years in which it first introduced then developed and grew the sport of Short-Handed Oceanic Racing. These celebrations will take place from the 1st to 10th May and will culminate in the start of the races. The Race competitors are expected to arrive in Plymouth by the 2nd May to join in the event.

The Event also forms part of Plymouth's Mayflower 400 celebrations whose Chief Executive, Charles Hackett, said "I am incredibly proud to see Plymouth's premier yacht club joining in the promotion of Mayflower 400. The Royal Western Yacht Club's Anniversary celebrations and the start of their Transatlatic Singlehanded and Twohanded Transatlantic Races - the OSTAR and TWOSTAR - on the same day as the professional TRANSAT will be an important part of the extensive portfolio of waterborne activity planned for 2020".

OSTAR/TWOSTAR 2020 is supported by the NewportYacht Club andVisit Newport
Closing date for Entries 16th March 2020
Notice of Race on the RWYC website: www.rwyc.org/OSTAR/ or www.rwyc.org/TWOSTAR/

Just opened my latest Seahorse and unless my eye sight is failing there appears to be a pretty big "gaff" by The Commodore in his Editorial. I suspect the picture of this Tschuss is Christians new boat, the Fast 40+ ex Invictus and not the Mills MAT 1180.

He states "same size, same rating system but different takes" or does he mean different rating?

The MAT 1180 and JPK 1180 might be the same size and under the same rating system but one is French designed and built and the other is not. Guess which rates lower!

Originally built for a round world race, she was conceived by renowned architect and sailors. Perfectly suited for solo and double handed race, she is in good condition and ready to race the next Route du Rhum. Fast and reliable, clear deck layout, sleek lines, all is thought to sail her easily.

Ex CHESSIE RACING, ex ASSA ABLOY, ex BIG ONE, this Volvo 60 was refitted with new deck giving a higher headroom of 1.93m. She has fantastic performances (up to 30 knots). She successfully entered the 1997-1998 Whitbread Race and came second at the 2001-2002 Volvo Ocean Race.

The Last Word
Those are my principles, and if you don't like them... well, I have others. -- Groucho Marx