Family Day at Lendy Cowes Week delivered stunning conditions with unbroken sun and a solid east south-easterly breeze of 9-12 knots. The best winds of the day were predicted to be in the eastern Solent, so all classes started towards the east.

IRC Class 5 had an even tighter finish - the first three boats crossed the line in just 10 seconds. The fleet started cleanly, but only because a number of premature starters had already turned around before the gun. These included three boats - Charles Whittam's X-34 Juno, Alistair Bowden's Sigma 38 Mouflon Noir and an X-362 Sport - who were forced out at the southern end of the line. This allowed Phil Plumtree's Half Tonner Swuzzlebubble to take an early three length lead before quickly extending away in clean air ahead of the pack.

In the Contessa 32 class Ray Rouse's Blanco was first away from the start, with Ed Bell's Mary Rose Tudor close on her windward quarter. Starting more towards the middle of the line, Assent also looked well placed at the start. Different members of the Rogers family are skippering this boat during the regatta, including the original builder of the Contessa fleet, Jeremy Rogers.

Monday promises to be another beautifully sunny day, but with lighter winds, including a period of calm mid-morning before a sea breeze builds. As a result a postponement has already been announced, with classes scheduled for committee boats starting one hour later than planned, and those on the Royal Yacht Squadron line two hours later.

FAST40+ Class at Lendy Cowes Week
The second day of Lendy Cowes Week delivered fantastic conditions for the FAST40+ Class. An easterly breeze held out for the duration of the day, and with a sea state enhanced by wind over tide mixed with tropical temperatures, the Solent was the perfect playground. PRO Stuart Childerley go the fleet away on time for two textbook windward leeward races, and a round the cans race finishing on the Royal Yacht Squadron Line, which put the icing on the cake. After four races in the series, Girls on Film leads the FAST40+ Class by just two points from RAn VII, with Hitchhiker in third.

"Really good racing today, with a square line and a good course, and that is so important." emphasised Girls on Film's Peter Morton. "We got a glam. start in the first race, which puts us in a good position to hold off the competition. The second start was not as good, however we got a second place, and consistency is very important in this fleet; one mistake and you can be at the back of the fleet in a heartbeat. We know Rán is a great boat with a great team, and in the last race she lifted up her skirts and was off. But we are happy with our boat speed and our position in the regatta, we have a slender lead."

The line-up for Lysekil Women's Match is now complete. The Russian team ProkaTeam Sailing Team with skipper Ekaterina Kochkina took the last place in the competition. Kochkina made her debut on the WIM Series in 2017 in Helsinki. She has climbed steadily on the International Sailing Federation's ranking during the last few years and is now ranked 23rd in the world.

Half of the twelve team's entering the regatta are among the top ten ranked teams in the world. The top ranked sailor Anna Östling's team are one of the favourites, especially after the team's win in GKSS Match Cup Sweden in early July. But Pauline Courtois, who won the WIM Series last year, will be a strong competitor.

One Swedish team will compete in Lysekil Women's Match for the very first time. Sanna Mattsson and her Sweden Women's Match Racing Team grabbed a place in the regatta thanks to a strong performance in a qualification tournament in Gothenburg last fall.

The first racing day is on Tuesday, August 7th. The competition is then determined in a round robin where all teams face each other. The best teams from the round robin reach the quarter-finals, which are followed by semi-finals and the final. The final will be raced on Saturday, August 11th.

Seahorse August 2018
What's in the Latest Edition Of Seahorse Magazine 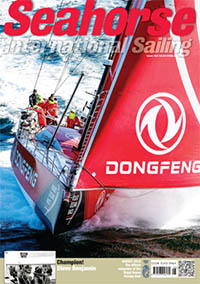 It hardly ever rains
Keeping all of the people happy for all of the time does not happen by accident... Rob Weiland

Re-entry is a bitch
Often the finish of a round-the-world race can ‘simply’ see one set of all-consuming challenges replaced by another. Brian Hancock

Well, that was rather good
After many years’ dominance by a ‘well-known Australian design’ the Kevin Ellway-designed and Simon Maguire-built Exocet Moth took the top 17 (sic) places at the 2018 Moth Worlds in Bermuda...

Rombelli started the day five points ahead of Yukihiro Ishida's SIKON (Manu Weiller, tactician), and as he has managed in the past, he successfully found the right edge to keep his team in the lead to take the win, despite the aggressive attacks from his best opponents.

Race Eleven saw the bow of Valentin Zavadnikov's DYNAMIQ-SYNERGY SAILING TEAM (Kelvin Harrap, tactician) across the finish line in first to complete the event. Rombelli clinched the Copa del Rey Mapfre title by taking second place. Finishing in third was Richard Goransson's INGA, who up until now had dominated every Melges 40 event this season.

It was a top day for the owner-drivers, who won all today's four races: Simon Delzoppo's .film Racing claimed the first (his second of the event), leading from the top mark on. Knocking it out of the park today was Erik Maris' Zoulou, showing a return to her GC32 Lagos Cup form by winning both today's second and fourth races.

Alongside INEOS Team UK and Zoulou, Jason Carroll's Argo was joint top scoring boat of the day. The US team won race three today, and was leading for most of the second too, which they would have won had they not picked the wrong, light wind side of the last run.

The debut partnership was made official at a signing ceremony in Liverpool, UK, and will see Zhuhai, along with Jiuzhou Holdings, collaborate with race organisers Clipper Ventures, on the 2019-20, 2021-22 and 2023-24 editions of the global event.

Zhuhai Jiuzho Holdings already has extensive experience in hosting major sailing events, including the 2016 and 2017 China National Sailing Regatta, as well as its own 'Jiuzho Cup'. Utilising its new Clipper Race platform, Zhuhai Jiuzhou Holdings aims to enhance its sailing development and promote its renowned 'Islands and Sailing' image to the rest of the world.

Zhuhai also has one of the largest yacht-build bases in China, and this new partnership will bring further development opportunities for the city's boat building industry.

The inclusion of Zhuhai in the Clipper 2019-20 Race will see three stopovers in China, as it joins existing Host Port Partners Sanya, located in the south of the country, and Qingdao in the north. The rest of the Clipper 2019-20 Race route will be announced over the coming months as the organisers now switch focus on planning this next edition, which will start next summer.

And we have a winner

Our contest about the historical bow sticker from last Friday. A full and correct reply from Don Woods within minutes of broadcast:

It was an example at the time of poor communication from a designer.

If I recall Kevlar was not allowed in IMS unless 'grandfathered" and Nicola Sironi had asked previously for more information.

The RORC measurer probably didn't know the mast used an "I" section of Kevlar, I think athwartships, that enabled spreaders etc to be dispensed with.

Without seeing the IMS rating application form submitted its difficult to see where most of the blame lay.

I suppose the historic irony is IMS came about because Jerry Mullins' ketch Cascade drove a hole in IOR and Olin Stephens who seemed to be in control of IOR hit it with a big penalty and moved the goalposts! The old "protecting the existing fleet" scenario !

Shortly after the K incident I put together an unstayed rig catboat with prodder etc - when I asked Mike Urwin how IRC would treat unstayed rigs (IRC penalised checkstays, runners extra spreaders , jumpers etc) - the answer I got was "That's a very good question"

This old ex IRO would like to draw attention to the fact that bow numbers were introduced at a time when large fleets of dinghy competitors sought to hide themselves on the start line. The fleets became all white hulls making the RO`s task more difficult.

I was Team Manager at a Finn event during Kiel week. Chris Law was seen as being over the line in his distinctive blue hulled Finn with Stowe School Crest on the bow. All the other boats but one were white hulled.Trouble was he had sold his identical previous years boat to a competitor who was sailing in the event.So there were two identical blue boats. It took most of the rest of the week to get him reinstated.

Bow numbers help but the organisation has to ensure that these are all placed at the required distance from the bow. Numbers are expensive. Two per competitor. To help the cost some classes chose to incorporate a sponsors logo on the sticker with the sponsor paying the cost.

At one time the IYRU decided that the front 25% of the hull should be reserved for sponsors. I am not sure if this still applies. In the 49er class I noted that the sail numbers were being placed very close to the luff rope slot and some numbers were prefixed with a zero number. Again making identification at the start difficult.

At Cowes Week I noted that large yachts mainsails sported different colours of dark cloth with the number spaced over both shades.Again making positive identification from a pitching and rolling committee boat difficult. I will refrain from commenting about identifying Hobie Cat sail numbers ! All this being done to hide from the RO !

It's probably as well that I am no longer spotting the start line and that modern electronic aids are now helping to get correct decisions.

Built in 2012 by McConaghy Boats, to a high Carbon/Nomex/Epoxy spec, she has achieved top level success on both HPR and more recently IRC. Newly added FAST 40 transom scoop and with a new rig, she is bang of for IRC and ORC optimisation and a cost effective way into the FAST 40 world.

Epic Judel/Vrolijk from Marten in 2001, with a nautical makeover in Blighty of gargantuan proportions, she has been zero houred. Looks amazing.

Greg Elliot is a legend in the Southern Hemisphere where his fast, lean and utilitarian yachts are perfect for making fast passages through the vast expanses of the Pacific Ocean. They are superb seaboats and there design and execution is simple and robust. ZINDABAR is a good example of his craft and has been substantially updated in this ownership. A big refit in 2009 has been followed by a number of smaller upgrades to ensure that she remains ocean ready.

The Last Word
Why do you sit there looking like an envelope without any address on it? -- Mark Twain