Team Brunel, at the head of the Volvo Ocean Race fleet on Leg 9 from Newport, USA to Cardiff, Wales, was the first to set a new 24-hour distance record in the Volvo Ocean 65 class.

Bouwe Bekking's team blew past the previous record of 550.8 nautical miles set in the last race by Abu Dhabi Racing just after 14:00 UTC on Thursday afternoon.

But they didn't hold the record for long. Simeon Tienpont's team AkzoNobel soon bettered their rival and the teams traded blows in ideal speed-making conditions in the North Atlantic.

While there was an extremely satisfying runaway victory for Takashi Okura's mainly Kiwi crew on Sled, a team now comprising almost all past or present Team New Zealand America's Cup sailors, it was the third place of Harm Muller-Spreer's team with rivals and team-mates Quantum Racing in eighth that now means the German-flagged crew lead by five points after eight races.

Quantum Racing's long-standing love-hate relationship with the coastal race concept was in no way enhanced by today's outing. Picturesque it may have been but they were judged to be over the start line early and after re-crossing the line they were always trying to fight back along a track that did not have any real passing lanes.

Their one divergent choice, staying right up the long beat – closer to the mainland shore – yielded no long-term profit. With many spirited boat on boat tussles going on ahead of them that was the best they could manage under the circumstances.

The Sibenik 52 SUPER SERIES Sailing Week will take place from 23-27 May.

While there was breeze most of the day, it was never more than 3-4 knots and, while a feint hope existed that an evening breeze would come in, the sailors waited in vain. The sailors spent the day chatting, making new friends, and generally putting the world to rights.

The forecast for the final day is more promising with moderate to strong winds forecast. The start time has been brought forward to 10.00 to try and get two races in before the wind gets too strong. Many here are really not sure whether to believe it, though the weather briefings each day have been fairly accurate.

The growing - fortunate - band of big cat owners are really getting it together. Witness the 'sporty' and successful racing debut this winter in the Caribbean of the first few super cool all-carbon HH66 cats built by Hudson Yacht Group

The entry of Hudson Yacht Group's HH66s into this winter's Caribbean racing circuit illustrates interesting aspects of their design: despite significant differences in interior layout, accommodation, deck plan, rig plan and even sail sizes and inventory, this Morelli & Melvindesigned luxury cat can still deliver both speed and comfort. This is testament to the design's flexibility to accommodate unique features, plus the ability of Hudson Yacht Group to imagine, design and build to the tastes of each owner and meet their vision of luxury highspeed offshore sailing.

One of the premier events in the Caribbean season is the annual Les Voiles de St Barth Regatta, which attracts some of the most luxurious performance monohulls and multihulls to enjoy a nicely balanced week of sailing and sunning: the perfect milieu for the HH66. Winds are typically a mix of fresh 20kt+ trade winds and near-drifting, and seas vary from oceanic breakers to flat as a mill pond. So versatility in performance is important.

Equally important this season was the dedication shown by the three HH66 owners and all other participants at Les Voiles. After the devastating storms that hit the region in September 2017 the rebuilding efforts at St Barths and all the northern islands were very much boosted by the yachtsmen's loyalty - and their business.

Full article in the June issue of Seahorse: www.seahorsemagazine.com

RORC Myth of Malham
The race around Eddystone Lighthouse is one of the longest in the 2018 RORC Season's Points Championship. The course mirrors the first 130 miles of the Rolex Fastnet Race, as far as the famous lighthouse, 13 miles southwest of Plymouth. Fifty teams with skippers from France, Great Britain, Germany, Norway and the Netherlands will take part in the fourth race of the RORC Season's Points Championship.

"It should be a spectacular downwind Squadron Line Start." commented RORC Racing Manager Chris Stone. "Looking at the forecast it should be a fast, broad reach out of the Solent and down to the Eddystone Lighthouse, with up to 20 knots from the north east, the faster boats should be hitting high speeds. High pressure is forecast for the second day of the race, which should provide light winds and a tactical conundrum for the fleet, which will have to decide whether to play the tidal gates or sail offshore in search of better breeze. A number of teams in the race, will count it towards qualifying miles for the Volvo Round Ireland, Sevenstar Round Britain & Ireland and RORC Transatlantic Race, so a variety of wind conditions will be a good for their preparations."

In IRC Zero, Ker 46 Lady Mariposa skippered by Daniel Hardy, is the favourite for line honours and will be looking to build on their class win in the North Sea Race. Racing in IRC One, and also challenging for line honours will be Harmen Jan de Graaf's Dutch Ker 43 Baraka Gp, making their debut for the championship, and Edward Broadway's British Ker 40 Hooligan VII, which was the overall winner of the Myth of Malham in 2013. Mark Emerson's British A13 Phosphorus II will be looking for a good result to take the lead for the 2018 season in IRC One.

It's been six years since the skippers in the IMOCA class last took part in a race in the Mediterranean with the 2012 Europa Warm Up. With the Monaco Globe Series, they will be competing in a non-stop double-handed for the first time in these fantastic waters, which often prove to be complicated. After two days of exhibition races on Friday 1st June and Saturday 2nd June, the duos will set sail from Monaco at the start of the 1300 mile race at 1p.m. precisely on Sunday 3rd June.

The fleet will sail along the Western coast of Corsica before entering the Strait of Bonifacio between Corsica and Sardinia to head for Sicily. The fleet will then point their bows towards the Balearics before sailing back to the Principality of Monaco. "On one of the world's most beautiful seas, the IMOCA skippers will certainly enjoy themselves and we will be seeing some great pictures. They will be able to make the most of an enthusiastic welcome at the Monaco Yacht Club, whose know-how is well established," declared Antoine Mermod, President of the IMOCA class. It is HRH Prince Albert II who will signal the start of the Monaco Globe Series. A nod to the fact that he also launched the 2016-2017 Vendee Globe.

This new event will count a lot, as it is the first race on the calendar in the new IMOCA world championship, the Globe Series. Leading up to the 2020-2021 Vendee Globe (at the end of which we will discover the name of the IMOCA world champion), two races will take place each year with solo racing and double-handed racing. For 2018, the second race in the Globe Series will be the prestigious Route du Rhum. In 2019, there will be one event in the spring (which will be announced shortly) and then the Transat Jacques Vabre. In 2020, the skippers will take part in The Transat and then in the New York-Vendee. We should add that these events in the Globe Series will also count as qualifiers for the Vendee Globe, taking into account the number of miles raced by the skippers.

Slovenia and Sweden Wrap Up 470 European Championship Crowns
Medal Race day at the 2018 470 Open European Championships in Bourgas, Bulgaria got underway in a breeze of 10 knots. The apparent pre-race calm in the boat park switched to high energy full-on physical racing for the 25 minute windward-leeward races.

With Slovenia taking the gold, it was silver to Frederike Loewe/Anna Markfort (GER), with their team mates Nadine Boehm/Ann-Christin Golias (GER) pushing all out to finish the medal race in 3rd place and take the bronze. 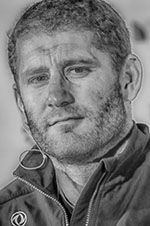 I had no idea there was a Royal connection in the Volvo Race. He looks to have put on a bit of weight since the wedding - legacy of too much cake?

I've looked at a lot of photos of the race and rarely have I seen a crew member wearing either a PFD or tethered harness. Is my eyesight that bad or do they flaunt basic safety precautions? Just today there was picture from MAPFRE with a sailor forward of the mast and no visible safety gear, while going upwards of 20+knots. There were 3 crew aft on BRUNEL with no visible gear with lots of water over the deck.

Charis is a stunning example of the semi custom Maxi Dolphin 65 by Luca Brenta. Launched in 2004 and fully refitted in 2012.

"Vineta" is the most competitively priced boat on the market and incorporates an upgraded 3-spreader mast configuration from Southern Spars, which makes her a real bandit on the rating game, as well as unrivalled performance cruiser.

Reinvented as the ultimate cruiser racer by the team at Nauta Yachts with new deck, interiors and rig.

After winning the ARC, she sailed and explored remote areas around the world such as Patagonia, Cape Horn, Polynesia and Eastern Australia.

Now back in the Med, she is in pristine condition with brand new carbon rigging, engine, genset, electronics, water maker and A/C system.

Ready to go for the next blue water cruise or maxi regatta.

The Last Word
It is amazing what you can accomplish if you do not care who gets the credit. -- Harry Truman