The turbo-charged Volvo 70 Warrior sailed by Stephen Murray Jr. won CSA 1, scoring a win in all but the first of seven races: "These were extreme conditions; right out of the Antigua Sailing Week brochure and it was brilliant sailing. If you were skiing you would call it powder days! I am so proud of the team. It is the best crew I have ever sailed with and it's humbling to be around them."

OnDeck's Antiguan Farr 65 Spirit of Juno won CSA 3 after an epic battle with Oyster 82 Starry Night of the Caribbean.

Jonty and Vicky Layfield's Antiguan Swan 48 Sleeper was the winner of CSA 5, winning all seven races. Jonty and Vicky are residents in Antigua and are very active in encouraging young Antiguans to the sport. Teenage Antiguan Shanoy Malone was calling tactics on board. -- Louay Habib

Full results of all classes

The victory of the Star Eastern Hemisphere Championship 2018 goes to the italian team Diego Negri-Sergio Lambertenghi, (7-3 today's standings) confirming a period of great form of the twoin this first half of the season, following the success in the Bacardi Cup in Miami two months ago.

Negri-Lambertenghi (1-2-4-7-3 with a final score of 10 pts) managed to stay 5 points ahead of the very strong team Augie Diaz-Bruno Prada (USA/BRA) winners of 2016 Star World Championship in Miami, with Prada who boasts two Olympic medals in this class, a silver and a bronze in 2008 and 2012 Games. The young team Thomas Allart-Killian Weise (NED/GER) is third after only one year racing together on a Star, they had a very great week with a total of 18 points (6-7-6-2-4).

Victory for the crew of Sodebo Ultim' in the Nice UltiMed
On crossing the finish line set off Rauba Capeu this Saturday 5 May, at 1:59pm local time, the crew of Thomas Coville (Sodebo Ultim') took victory in the first edition of the Nice UltiMed after 3 days, 57 minutes and 28 seconds at sea. A very fine win for Thomas and his crew members Jean-Luc Nelias, Thierry Douillard, Quentin Delapierre, Matthieu Vandame and Thomas Le Breton. Less than an hour later, it was the turn of Francis Joyon (IDEC SPORT) and his men to complete the original and complex course spanning nearly 1,000 miles and taking in the coastlines of the Sud Provence-Alpes-Cote d'Azur Region, Corsica and Sardinia.

In winning the Nice UltiMed, Thomas Coville and his crew have got their revenge a year on from The Bridge. During the latter transatlantic race between Saint Nazaire and New York, the crews of Sodebo Ultim' and IDEC SPORT were already embroiled in an almighty battle for 2nd place, which finally concluded with Francis Joyon's men gaining the edge with a lead of just 5 hours (in a race spanning over 8 days). However, in the Nice UltiMed, it's the crew of Thomas Coville who have won the duel by just 57 minutes, after 3 days, 57 minutes and 28 seconds of racing. Yves Le Blevec, who was forced to retire from the race on 2 May, was out on the water aboard Actual-Grand Large Emotion to welcome them in. Back on shore, Christian Estrosi, Mayor of Nice, and Jean-Pierre Dick, patron of the Nice UltiMed, also came out to congratulate the two crews.

Seahorse May 2018
What's in the Latest Edition Of Seahorse Magazine 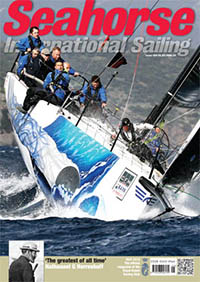 Foils first
When the creator of the original televised grand prix skiff series Bill Macartney went looking for a new game he told his 'creative partners' Morrelli & Melvin to give him a big set of foils, a powerful rig... and only then some trick hulls to float it all

Easier than ever?
Almost certainly not... argues Brian Hancock

Twenty years and counting
It's really been that long since Wally - and Wally style - burst on the scene... The best large yachts would never look the same again

Palma, Spain: Gentle, challenging breezes on the Bay of Palma meant the outcome in many of the 14 classes at the 15th edition of Sail Racing Palma Vela went to the wire. It was down to how the different teams dealt with the pressure performing in the fluky, shifty winds which determined which teams collected the winners' trophies at this traditional Mediterranean season opener.

In the highly competitive TP52 class it was a pin sharp, near perfect start from Azzurra which largely determined that they could hold on to win the Palma title while in the Melges 40 class which is making its regatta debut, it was all down to the last turning mark and the last run. At the last mark the long time class leaders Inga from Sweden were last and looked to have ceded the regatta win, but last gasp gains, rising to third in the five strong fleet was enough to rescue their class win.

In the ClubSwan 50 class the Earlybird crew kept their cool and on top of their maths to ensure they protected their points cushion to retain the PalmaVela honours they won here last year, a feat which was repeated in the Swan 45 class by Elena Nova, Christian Plump's crew which won for the sixth successive year. So too in the Wally class, the crew which went on the water this morning with the lead, Magic Blue, were able to hold out to score victory in the light winds.

There is no overall winner in the 635-nautical-mile race, although the winning boat in the St David's Lighthouse Division featuring amateur sailors is regarded as the race's top boat, a division Read feels should be open to yachts such as the one he competed on that obliterated the race record two years ago.

"I would like to see modern monohulls like Comanche, and others who use canting keels, allowed into the primary racing division and not be placed in their own canting keel division," said Read, who was the skipper of the 100-foot super-maxi Comanche that slashed nearly five hours off the previous race record in 2016.

"All of the other major yacht races in the world don't put innovative monohulls in their own division. They are allowed to be rated fairly and be part of the core event. It's time Bermuda Race did the same."

Significant changes have been made ahead of the race with the introduction of Multihulls, an Open Division and the addition of a new class in the Gibbs Hill Lighthouse division.

The Open Division is open to yachts with vertical-lift foils that slide out horizontally from the hull and provide the boat with considerable lift and power. Other foil arrangements are allowed in the Open Division, but with some restrictions in place.

The Gibbs Hill Lighthouse division is also now allowing canting-keel and water-ballast boats that were previously placed in the Open Division.

This year's regatta's lineup was exceptionally strong and evenly matched as all the skippers were classified in the top 100 of the world's rankings. Since the very beginning of the competition, the highest ranked Italian team of Ettore Botticini (No. 7 in the world) delivered an excellent performance losing only 1 race on the second day of the event. His victory over Zbroja allowed him to take the 1st place in the Round Robin and qualify directly to the Semi-Finals with the result 10-1. The next Quarter-Finals' slots were taken by Zbroja, the Dutch Jelmer van Beek, both with 9 wins and 2 losses, Szymon Jabłkowski (7-4), Szymon Szymik (6-5), Nelson Mettraux and Afonso Leite, both with 5-6 score. The Round Robin was held in excellent conditions with medium and stable wind.

The Semi-Finals were held in a very strong and gusty winds. All the matches of the first pair, Botticini vs Jabłkowski, were very fierce, filled with penalties and turns of action. Even though the young Polish team sailed very well and aggressively, it was not enough to defeat the Italians. Botticini delivered a perfect, mature performance and ruthlessly took advantage of all the opportunities and even the smallest mistakes of his opponents. The 3-0 score for Botticini does not reflect the emotions and the level of the evenly matched competition.

The second Semi-Final provided even more excitement and drama. Van Beek was very close to the final round already leading 2-0, but Zbroja recovered quickly, managed a tie and qualified to the Finals in the decisive fifth race.

The match for 3rd place was won 2-1 by van Beek, robbing Jablkowski of a medal.

In the Finals only one match was sailed. It was won by the defender of the last year's title - Patryk Zbroja sailing on the TT-Line yacht.

The next regatta of the Polish Match Tour series will take place in Swinoujscie on 22-24 June, whereas the next event on the Match Race Super League is Match Race Germany from 16th till 21st of May.

47 yachts competed in the Cervantes Trophy Race, the first domestic race of the 2018 RORC Season's Points Championship. It was a glassy start to the race, with a light breeze a warm sunshine bathing the Solent. The Royal Ocean Racing Club chose to select a course of approximately 130 nautical miles, with strategic and tactical decision required for the Solent start, crossing the English Channel, the North Coast of France, and a reaching finish into Le Havre. After a light airs downwind start, the fleet experienced a building breeze overnight in the English Channel from the north east, increasing boat speed towards Cussy Buoy, nine miles off the Normandy Coast. A light wind 23 mile beat to navigational buoy A5, was followed by a fresh broad reach to the finish, giving the fleet a variety of wind angles in which to maximize their performance.

Edward Broadway's British Ker 40 Hooligan VII took Line Honours in an elapsed time of 25 hours 18 mins and 08 seconds. Hooligan VII was just over a minute ahead of Campagne De France sailed by Halvard Mabire and Miranda Merron, which won the Class40 Division.

In IRC Four, Noel Racine's French JPK 10.10 Foggy Dew took line honours and the class win, and was just off the pace for the overall podium by under two minutes. Marc Noel's French Norlin 37 China Girl was second with Cora third.

Without a doubt the fastest IMOCA 60 ever built and potential for breaking the outright 24hr monohull record!!Raced by Alex Thomson in the 2016 Vendee Globe, this foiling IMOCA 60 is in exceptional condition and ready to race! Great boat for anyone who wants to race in the IMOCA circuit or go win races and break records. This boat is for sale or long term charter.

This Swan 70 combines the exhilaration of performance sailing with the comfort and security of a blue water cruiser. Under her former name 'Fastnet', she won the Swan Cup in 2002 proving to be unstoppable on the race course.

Handsome German Frers Swan 68 which is perfect for both a cruising and regatta role. She is a capable and fast bluewater cruising yacht with a great layout for owners, 6 guests and crew. She has had some great updates through life including paint, decks, and rod in 2008, new electronics, communications and entertainment in 2011 and she is constantly updated. Now laid up under cover, she is awaiting her next yachting family to awake her from her slumbers.

The Last Word
We need more people speaking out. This country is not overrun with rebels and free thinkers. It's overrun with sheep and conformists. -- Bill Maher