Humans only: Cyborgs sidelined for America's Cup
Although it's a race of technology, Team New Zealand have taken steps to stop robots sailing in the next America's Cup, and to give more power to the humans on board. Suzanne McFadden reports.

There's a curious clause in the new class rule for the AC75 boat to be sailed in the next America's Cup. It reads: "There shall be eleven crew members, unless reduced by accident, who shall all be human beings."

"But you never know. People are always looking for the last bit of performance to get out of the boat. Whether anyone would turn up with a crew full of androids, who would know?" he says.

From a team that came up with "cyclors" in the last Cup, they certainly didn't think it would be so out-of-this-world for someone to invent cyborgs for the next.

Those are the kind of outside-the-square notions that Team NZ has had to think of when devising the document that defines how the new foiling monohull is built, and who will sail it, in the 2021 America's Cup.

* Editor... I had to doublecheck that the dateline wasn't April 1.

RS Feva World Championship 2018
On the last day of racing there were 4 points separating the top 2 boats and clearly both teams were nervous as the fleet headed out under the bridge into the gulf. The breeze was very light but the PRO was determined to try and get the final races in. The course was laid and the sailors were soon in sequence. As the fleet crossed the line, what breeze there was faded away and within a few minutes of the start the PRO had no choice but to abandon.

The fleet rehydrated and additional sun cream was applied as they drifted about waiting for the forecasted breeze to appear. The PRO ordered the media boat, affectionately known as the 'Mediocre Boat' into the fleet to entertain the frustrated teams. The loaned Mediocre boat was fitted with a huge sound system and the fleet was encouraged to dance, swim, dive and simply have some fun. Check out the Facebook Live here.

At 1pm after a lengthy discussion between the PRO and the RS Feva Class the decision was made to abandon for the day as there was no sign of the forecasted breeze. As the flags were hoisted the cheers rung out around the gulf from all the relieved sailors and the celebrations could begin. The RS Feva class had new World Champions, overall & mixed team Ben Hunton-Penman and Abi Jayasekara, Ladies Annie Hammett and Emma Wells, Boys Tom Storey and Rupert Jameson, Junior Femme Rijk and Silke Zuidema and the family title going to William Caiger and Becky Caiger. Check out the Facebook Live to watch all the celebrations.

It is amazing to see the strength of the RS Feva Fleet worldwide with 5 nations represented in the top ten. Ben and Abbey absolutely deserved their title. The USA Team Dieter and Conrad also sailed an outstanding week - tough competition and only 2 points between first and second.

Next stop is the RS Feva Europeans at the RS Games from the 9-15th of August: www.rsfeva.org/index.asp?p=calendar&id=47

Musto, the official apparel provider to the 2017-18 Volvo Ocean Race, is donating at least one observer's/on-board seat for the VO65 In-Port Race in Newport, RI, Saturday, May 19. If the first seat is sold for more than a pre-set price, a second seat will automatically be made available. In addition, Musto will also provide a new HPX smock - the exact same one as worn by the crews! - autographed by reigning Volvo Ocean Race winner Ian Walker, who skippered Abu Dhabi Ocean Racing to win the 2014-15 race. 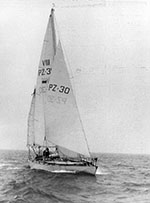 The Polish yacht Copernicus, the smallest yacht to complete the very first Whitbread Round the World Race in 1973-74, will compete in the Legends Race starting on 21 June from Gothenburg and finishing in The Hague.

Copernicus was built especially for the first Whitbread by the Gdanska Stocznia Jachtowa 'Stogi' boatyard in Poland, with a lot of help from the members of the Yacht Klub 'Stal' Gdynia on the Baltic Sea coast, who has owned her ever since. She is their pride and joy and the club keeps her in good condition, doing their best not to interfere with the history of her construction or to alter her lines. The participation of Copernicus in the Legends Race will bring the club back to the world of ocean racing.

Copernicus raced the whole way around the world without drama or incident, except perhaps on the final leg. Nothing had been heard of the yacht since the start in Rio de Janeiro some weeks earlier and the Race Committee, who suspected her radio was out of action, put out a request to all shipping to report any sighting.

One month after the start from Rio, the little yacht and her crew of five were reported to be in excellent condition and still racing. Fourteen boats completed the course and Copernicus finished the grueling 27,000 nautical miles in 11th place. Her skipper was Olympic yachtsman, Zygfryd 'Zyga' Perlicki.

She is constructed on an oak frame with mahogany planking and a plywood deck with teak overlay and was the smallest boat to take part and then to finish the round the world race. The Polish were people with dreams, which came true although at the time, they lived in a country behind the Iron Curtain, with modest maritime traditions.

After finishing the race in 1974, Copernicus was used for training, cruising and expeditions and still regularly sails across the Baltic and North Sea. In 2006 she was awarded The Cruise of the Year trophy in Poland for a circumnavigation of Iceland. Lots of people who had worked on her over the years were able to sail her and feel that their hard work was worthwhile.

Yacht Club Costa Smeralda Team First Italian Crew At Baldwin Cup
Porto Cervo, Italy: In just a few days' time the Baldwin Cup 2018 will get underway in Newport Beach (LA, California) and for the first time in the history of this prestigious trophy an Italian team has been invited to participate. A crew of eight representing the Yacht Club Costa Smeralda, led by team captain Filippo Maria Molinari, are setting off with the support of Italian construction company Impresa Navarra - a long-time supporter of sailing.

The Baldwin Cup is a team racing event held each year in Californian waters aboard Harbour 20 craft: vessels that do not require a great deal of physical work from the bowmen, however numerous calculations are necessary to come up with the winning combinations.

Competition will take place on the waters of Newport Beach from 12 to 14 April, right in front of the Newport Harbour Yacht Club where crowds of enthusiastic supporters usually gather to cheer on the home teams.

There were representatives from Belgium, Uganda, Baltimore, Cork, Cavan and Dublin Bay (north and south). The members heard a summary of last years escapades, including trips taken by some of the Irish 12 foot dinghies to European and 'Brexit' events, and the Irish Championship won by Mark Delany in Cora. A book describing the Class activities in Ireland since 1923 was launched.

During the 2018 season there are many exciting events proposed, including the highlight of the year which is:

The Class have decided to hold their Irish championship in the Royal St. George yacht Club at the end of August.

The 12 foot class have also decided to compete at CORK 300 in the year 2020 at Royal Cork Yacht Club as a demonstration fleet in the Currabinny River.

The 12 foot class have decided to write to the 12m. Class, looking for twinning of the classes.

Golden Globe Race inspires second film
A month after the launch of the Colin Firth / Rachel Weisz blockbuster MERCY, another film about the 1968 Golden Globe Race has hit the cinema circuit.

While the Mercy film plays out as a love tragedy between Donald Crowhurst and his wife Clare, this new low budget release titled CROWHURST focuses much more on Donald's nightmare voyage and ultimate suicide.

The 2018 Golden Globe Race will start from Les Sables d'Olonne on 1 July 2018, with 19 sailors competing from 12 countries - France 4, Britain 3, Australia 2, and one each from Estonia, Finland, France, Ireland, India, Italy, Netherlands, Norway, Palestine and Russia.

Sir Ben, the most successful sailor in Olympic history won medals at five consecutive Olympics from 1996 onwards, including gold at the four Games held between 2000 and 2012.

As previously reported by The Engineer, Sir Ben has a keen interest in manufacturing and the technology behind it, with his British America's Cup team, Land Rover BAR employing the latest manufacturing processes in the creation of their foiling race boat for the America's Cup.

MACH 2018 runs from 9th - 13th April and visitors can register for their Entrance Pass and Fast Track Entry Pack now, via the MACH exhibition website at www.machexhibition.com

According to the Olympic Team Manager James O'Callaghan, the National Yacht Club ace has opted not to take the place as she decided she would not have enough time between finishing her Volvo Ocean Race (VOR) commitments and delivering 'a result she would be proud of'. 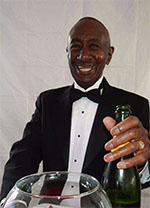 One of Detroit's most famous bartenders died this weekend.

Adams was best known as the inventor of The Hummer, his world-renowned signature cocktail that he crafted in 1968 while tending bar at the Yacht Club.

"When I invented the drink, I never thought it was going to be that big," Adams told Metro Times in 2011.

After mixing the drinks for his fellow staff members at Bayview in 1968, Ed Jacoby, bar and restaurant chairman at Bayview, insisted on trying one. After downing a few of Davis' new drink, Jacoby gave his two cents on the cocktail.

"You know what? After two of these damn things, kinda makes you wanna hum," Jacoby told Adams. Thus, The Hummer was born.

The drink took on an international following after local Bayview members would take trips around the world and requested The Hummer at bars and clubs all over the world. In these pre-internet days, bartenders would have to spring for a long distance call to Bayview. Calls from California, Florida, and even France would come in asking for the ingredients for this secretive sailor's drink.

The Last Word
All Plutophiles are based in America. If you go to other countries, they have much less of an attachment to either the existence or preservation of Pluto as a planet. -- Neil deGrasse Tyson