Specifically, new European Union rules governing sailor safety have decreed that the leading edge of any boat appendage must be no less than three inches across and have a parabolic ratio of not less than .06 krellnids (an industry term denoting the curvature back to the trailing edge). That shape quite literally won't fly, says TNZ's Glenn Ashby.

"We couldn't generate sufficient lift in our testing tank at 50 goddamn knots."

The Frenchmen fell off a GC32 catamaran during training in the waters just off Brittany, north-west France, and was hit by the rudder at full speed, leaving his right foot partially severed.

New Zealand is a signatory to the World Workplace Safety Act which incorporates all European Union workplace safety regulations.

New Zealand's health and safety record has been labelled as 'woeful' and a 'national disgrace' by a consultant with two decades' experience in the sector.

In the wake of the Pike River Mine disaster, the government last year set up the Independent Taskforce on Workplace Health and Safety to carry out the first wide-ranging review of the system in two decades.

"We have NEVER looked into the horrific injuries involved in sport. I myself have had my senses considerably dulled by being hit time and time again by the boom of my beloved yacht Clementine" said Fred Dagg, the newly appointed Minister of Safety and Farmarkelling in Sport. "Thank goodness the Frogs sorted this out after Cammas' accident, we now have a regulatory framework to enforce without having to do any research ourselves at all."

Back to Multihulls? America's Cup to Texas?
Click on image to enlarge. 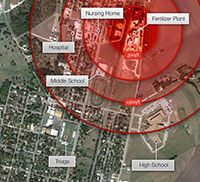 While tank testing with the new blunt edge foils has proven that at expected boatspeeds, foils will not generate sufficient lift for the America's Cup Monohull, it is possible with multihulls.

"Twice the foils, less hull weight is the key" says TNZ head Grant Dalton. "We have double the rudders, double the foils and an all-up hull weight significantly less than any monohull currently in build or under consideration. If we can't get past the "blunt foil" ruling and have to hamstring our foiling designs, then the only solution is to add a hell of a lot more foil area!

Or is there a way to avoid the new regulations entirely? TNZ legal consultant Beaurigard T. "Skruggs" McTavish has another solution. "Move the Cup to a locale that couldn't give a good goddamn about worker safety... like Texas".

Texas is so lax on regulations they let an uninspected fertilizer plant, built within 1000 feet of a nursing home, hospital and middle school, explode with dozens of deaths. Not one sentence of new regulations were written as a result of the catastrophe.

"Come on down to Texas... Corpus Christi would be a perfect venue for the next America's Cup" said former governor Rick Perry, now head of the US Department of Energy. "We're all about the Benjamins and if a Frenchie gets his foot cut off, then C'est va Lie, as they say in Paree. We'll give enough tax breaks for the Cup to woo Ellison back!"

GDPR and its impact on the Sport of Sailing
Click on image to enlarge.

On 25th of May this year, the new data privacy laws of the General Data Protection Regulation will be enforced. The Royal Ocean Racing Club has, like most Clubs, put considerable effort into preparing for them.

The new rules require for much stronger protection of all our competitors information, including personally identifiable data. Article 23 of the new law calls for organisations to hold and process only the data absolutely necessary for the completion of its duties (data minimisation), as well as limiting the access to personal data to those needing to act out the processing.

Starting with the Myth of Malham Race on 26th May, the RORC will implement a few key changes to how races are being run with respect to the privacy of its competitors.

Entry lists and results will be anonymised completely; entries will be sequentially numbered instead of displaying boat names and design types, and neither Person in Charge nor Owner will be listed. As per the requirement of "opting-in" to expose private data in the public domain, prize giving ceremonies will now require the winner to introduce themselves as associated to a boat if they so choose, or to accept the trophy anonymously.

More information is available on www.rorc.org

Volvo Ocean Race Faces Sailor Mutiny
Alicante Spain: Reeling from recent catastrophes in the Southern Ocean, from the lost of a sailor, the retirement of Scallywag, the dismasting of Vestas 11th Hour Racing, the pit stop for MAPFRE for repairs, the Volvo Ocean Race now faces its gravest challenge: a completely demoralized group of sailors who just want it all to stop.

"Brian Hancock's editorial about how wildly unsafe these beasts are was spot-on" said one prominent skipper who wished to remain anonymous. "Until we get proper lifelines, speed limiters, smaller sail sizes and some way to NOT have firehoses turned on us 24/7 on deck we quit". Similar sentiment from other teams who've just survived their Cape Horn passage with broken boats and spirits.

This is just a sailboat race, it should not be a suicide pact for the benefit of sponsors and high TV ratings. We are not gladiators in the Coliseum for your amusement. We're fathers, mothers, husbands and wives. Perhaps "Life at the Extreme" has become a bit TOO EXTREME?

The fleet has assembled in the Falklands where VOR officials and sponsor representatives are in secret talks with crewmembers. Enticements to keep racing include forced speed limits, an allocation of time for optional motoring and huge, prepaid life insurance policies.

An Electronic 'Protection Cocoon' Being Developed at CERN could have far reaching implications for sailing safety
Click on image to enlarge. 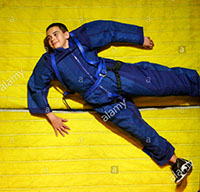 Research into high energy particle accelerators at CERN... and a popular science fiction movie make for some strange bedfellows, with the potential for a breakthrough in offshore safety.

"I've been a 'Terminator' fan since my graduate school days, said Italian particle physicist Fabiola Gianotti. "Particularly when a female Terminator was introduced in the third installment. It was an inspiration for me to pursue high energy physics.Remember that scene in Rise of the Machines where the T-X is slammed up against the side of the particle accelerator tube due to a strong magnetic field? Kinda memorable in that the next line spoken by the other female star is "Die you bitch!" So inspirational!

Humans won't be pulled to a strong magnetic force as they are not made of ferrous materials. But they can wear them... or better yet, have them implanted subcutaneously and would thus be affected.

"In the event of a man overboard, sensors implanted in a sailor would note that a crew member has moved farther from the base sensor than the hull shape allows. The base sensor would then activate a particle accelerator tube circling the interior of the vessel, creating an immense, focused magnetic field which would pull the sailor out of the water and stick him or her to the hull until hoisted onboard.

Tests already underway have already gone past the "crash test dummy" stage to involve humans. "We're just using young grad student interns for testing, they're a bit more resistant to bruising and we don't have to pay them." said Gianotti.

The Last Word
We're fools whether we dance or not, so we might as well dance. -- Japanese Proverb