MAPFRE wins the Around Hong Kong Island Race
It was a challenging day for the Volvo Ocean Race teams as they tackled the Around Hong Kong Island Race on Sunday with a generously sized spectator fleet on hand to cheer them on. Light and variable wind shortly after the start allowed the leading boats to break away as they found new wind pressure first. But it didn't mean opportunities for passing later in the afternoon were completely closed off.

MAPFRE had the best start in the fleet and eked out ahead in light winds. Three teams broke the line early and needed to restart, with Team Brunel, Turn the Tide on Plastic and Sun Hung Kai/Scallywag all turning back.

It put them at an immediate disadvantage, but while Brunel had the best re-start, it was Turn the Tide on Plastic who moved up the fleet to challenge the leading pack over the next 20 minutes.

However as the race progressed, MAPFRE and Dongfeng Race Team found the new favourable wind first and built a commanding lead over the others.

*** Note: The results of the Around Hong Kong Island Race have been combined with Saturday's HGC In-Port Race to rank the teams after the two weekend races. The overall leader from this weekend's racing win the maximum seven points from Hong Kong.

In three of the five classes, the leader coming into the day was assured or all but assured of the gold medal due to the advantage built up during the full-fleet portion of the regatta.

The leaders in the other two classes had solid, if not invincible, cushions over second place.

The king is back
Olympic gold medalist Giles Scott confirmed he is still the king of the Finn class with an emphatic win in the medal race at the World Cup Series event in Miami today to take the gold by 32 points. Rio bronze medalist, Caleb Paine, from the USA, went into the day in third place, but sailed a blinding final downwind to steal the silver medal away from Alican Kaynar, from Turkey, who had to settle for the bronze.

While Scott had already technically done enough to secure gold, the real interest was the fight for silver and bronze and it turned into something of a thriller. Sailed in 16-20 knots the medal race produced some fantastic sailing and close racing. The line up included eight Olympians from Rio, including two medalists. No one was along for the ride. It was a very high-calibre fleet.

After nearly a year and a half away from mainstream Finn competition, the four-time world champion and Olympic champion Giles Scott, is well and truly back. The fleet in Miami was world class, so to secure the gold with a day to spare is a remarkable performance after so long away from Finn competition. Scott's performance on the final two days was enough proof that he is still the king of Finn sailing. The target remains on his back.

Looking ahead, the 2018 season is geared around the 2018 Sailing World Championships in Aarhus in Denmark, in August, the first qualifier for the Tokyo 2020 Olympics. Before then there is a lot of sailing to be done, with most of the fleet now heading back to Europe to prepare for the first major event of the year, the 2018 Open Europeans in Càdiz, Spain, where there are almost 100 Finns on the entry list. It begins in just over six weeks.

Seahorse February 2018
What's in the Latest Edition Of Seahorse Magazine 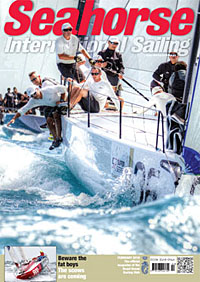 Update
The clock is ticking for Cup teams and there is way more to the Star Sailors League than meets the eye. Plus stretching the entente with the Golden Globe

Sailor of the Month
Determination plus persistence equal delivery

Many competing sailors at past Warren Jones International Youth Regattas have fulfilled their dreams of going on to compete at the highest level in all types of yachting regattas from Americas Cup, Volvo Ocean Race, Match Racing Tour events to Olympic sailing competition. Several of the competing skippers at last years event went on to compete in the World Match Race Tour last season.

Mark Spearman is one of three skippers representing Royal Freshwater Bay Yacht Club. He spent 2017 competing in the entire World Match Racing Tour as tactician for Neptune Racing. The highlight of the team's year was being ranked number 1 in the World Sailing rankings and also finishing in the top 5 at 3 world tour level events. Mark and hist team won the JESS Match Cup which acted as a training warm up event a few days ago.

Also representing local host club Royal Freshwater Bay Yacht Club is Will Boulden. Over the past 12 months, Alpha Racing Team with skipper Will, has been competing hard around the world in open and youth monohull match racing events.

This included winning the Harken International Youth Match Racing Regatta, and also the OM International Grade 2 Event held in Italy. Alpha Racing Team has also been competing in the USA, where they finished 3rd in the US Grand Slam Series and 5th at the prestigious Governors Cup.

Ethan Prieto-Low and his team, Calypso Racing, also from (RFBYC), are back competing for a third year. Calypso Racing is a young crew with an average age of 19 years who have all progressed through from the Royal Freshwater Bay Yacht Club dinghy club and have now been sailing together for a couple years.

Ethan is an experienced keelboat sailor, and over the past 5 years has competed in a number of classes including campaigning an Etchells for the 2018 Nationals and a Dragon leading up to the World Championships in Fremantle in January 2019

The Warren Jones International Youth Regatta is part of The City of Perth Festival of Sail which includes a packed programme of sailing activities for all ages and levels of experience.

For a full programme of activities visit: www.swanriversailing.com/warrenjonesregatta-eventprogram/

Sydney Harbour: The first day's racing in the 2017-2018 Australian 18ft Skiff Championship was sailed on Sydney Harbour today in a 15-knots East-North-East wind and produced some close racing and a variety of placings in the 17-boat fleet.

A capsize by Smeg during the lead up period to the start of Race 2 was disasterous to the first race winner when Smeg missed the start by several minutes.

After a strong finish in Race 1, the Asko Appliances team were quick to grab the lead in Race 2 and gave no other team a chance of victory as they powered to a massive 58s win over the short ENE course.

Yandoo backed up her first race runner-up placing with a similar result in Race 2 and shares the lead with Asko Appliances on four points after the first day's racing.

Smeg recovered from her horror start in Race 2 to finish that race in seventh place to be tied overall with Appliancesonline.com.au (Brett Van Munster, Phil Marshall, Nick Hord) on eight points.

The young Rag & Famish Hotel team of Bryce Edwards, Jacob Broome, Rory Cox elected to sail with their smaller #2 rig and sailed brilliantly to grab third place in Race 2 for an overall total of 10 points, and fifth place on the leader board.

Races 3 & 4 of the Australian Championship will be sailed next Sunday, 4 February

The Australian 18 Footers League's Spectator Ferry will follow the race.

Match Race Super League 2018
With plenty of tailwind from the America's Cup, Match Race Germany towards it's 21st edition and the Match Race Super League in the second season are sailing into a bright future - on one hull. Both, the leading German duel classic and the international Match Race Super League gain an increasing popularity after the co,eback of monohulls fort he 36th America's Cup. "For sailing, the best news is that the America's Cup has returned returned to monhully," says Finland's Mati Sepp, not only number six in the matchrace world ranking list but also the organizer of the Matchrace European Championship this year in Estonia. Says Sepp, „Match Race Germany is a landmark of European Sailing and it is a great example of organising a high level sailing event!".

More than 15 match race regattas in range of Grade 1 to Grade 3 in 15 countries on four continents have already joined the Match Race Super League. "And we expect further growth this year", says Match Race Germany's Sports Director and the Match Race Super League's coordinator Eberhard Magg, „some organizers are still in promising negotiations with their partners. In addition, we have inquiries from the fifth continent, Africa."

World Saililng Show
How fast can one person sail around the world? Last year we thought we knew, but 12 months later when Francois Gabart smashed the previous record, the sailing world drew breath. Was this the ultimate limit to the ultimate challenge?

To find out, we looked at the history of round the world record breaking and talked exclusively to Sir Robin Knox-Johnston, the first man to sail solo, non-stop, around the world about how times have tumbled and what lies ahead.

In addition, we go to Nassau in the Bahamas to witness an extraordinary victory as the world's best compete in a champion of champions showdown.

We also re-visit the grueling Volvo Ocean Race as the fleet careers though the Southern Ocean before parking up in the Pacific.

Plus, we take a look at the controversy in the Rolex Sydney Hobart race.

Weather cancels Conch Republic Cup
The 10th edition of the Conch Republic Cup has been canceled due to extreme weather condition. The three leg event between Florida and Cuba was to leave Key West on January 27 for Varadero, followed by races from Varadero to Havana, and then finally leaving Havana to arrive in Key West on February 3.

The high pressure that sat over the race area caused high winds and seas for the week up to the start and a review of weather forecasts did not offer sufficient relief. The existing unstable weather preceding the strong front coming January 29 will close Hemingway Marina and the potential for thunderstorms and squalls in the Florida straights will make a crossing hazardous.

"We do not want to risk anyone's well being for this event," said a statement on the race website. "We wish all participants the best and appreciate your understanding in our decision to keep everyone safe. Hope to see you in future."

Named “Vega” since she was launched, delivered July 2004, second owner who has maintained her in very good condition by a full-time captain.

Launched originally as "Silk Cut", she quickly established herself as the fastest ocean racer on the water and held the 24hr record for a number of years. In more recent times, she was known as “SEB" and now "Bou Dragon", where she has been meticulously maintained and modernised by her current owner.

Classic S&S Tartan 41, from 1973, with experienced owners who have shown her to be a competitive offshore racer. With many recent upgrades, she has been well loved and family cruised, as well as hitting the race circuit. Now seriously for sale.

The Last Word
I cherished my hate as a badge of moral superiority. -- Mark Rudd