29er Zhik World Championship being blown away!
It was another seriously brisk day for the second day of the final series of the 2018 Zhik 29er World Championship. Racing was cancelled yesterday with the breeze far above the 29er wind limit and the Race Officer even reporting one gust punching up to 50kts!

The silver fleet was not at its full strength today with some of lesser experienced teams electing to stay onshore. On the water, Australia is dominating the fleet taking the first three positions. First in the fleet are female team Annabelle Davies and Madison Woodward (AUS18) followed by William Wallis and Brendan Crisp (AUS2447) and John-Mark Paul and George Richardson (AUS2131) with 3 points separating them.

Leading four within six miles approaching Solomon Islands
Four boats are within just six miles as the leaders approach the Solomon Islands, the easternmost point of which is a mark of the race course for Leg 4 of the Volvo Ocean Race. Dongfeng continues to lead over team AkzoNobel, MAPFRE, and Vestas 11th Hour Racing, who are all within just six miles of each other as of 1300 UTC on Sunday.

In fact, the entire fleet has compressed significantly over the past 24 hours as the leaders raced into less stable conditions, allowing the backmarkers to close the gap.

Sun Hung Kai/Scallywag, for example, who trailed by 90 miles at 1300 UTC on Saturday, had halved that deficit by Sunday afternoon. Now only 45 miles separates first from last, and the unstable weather is expected to continue.

The weather is very unpredictable. In the squalls, winds can be up to 25 knots. In the lulls, there can be as little as 5 knots.

The routing software suggests the boats will 'round' the island of San Cristobal closely, leaving it close to port, before continuing north through the lightest winds of the doldrums. The next 48 hours will be very challenging.

Seahorse January 2018
What's in the Latest Edition Of Seahorse Magazine 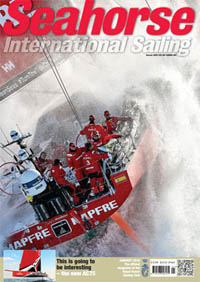 The race that launched 1,000 careers
Frederic Augendre takes the Figaro 3 prototype out for some testing of his own

Planes, trains and automobiles
Decision Composites outside Lausanne have been responsible for some of the fastest and most 'edgy' raceboats of the modern era. And plenty else besides. Founder Bertrand Cardis reflects on an interesting 30 years...

Cup heritage - Part III
From a disappointing Big Boat to an elegant if rather large 'C-Class' to a technical run through of the IACC America's Cup era. Eric Hall

ACO 9th MUSTO Skiff AUS National Championship
Arthur Brett steered Uncle Bob just ahead of Jamie Hilton's Tyson at the finish of the final race to win the ACO Musto Skiff Australian Championship by a hair's breadth. The two contenders probably didn't even know they were in a fight for the title, but Brett found a gust from heaven on the final run of snakes and ladders, and it was enough to carry the Australian past the Scotsman who had fallen out of the best of the breeze. Brett surged across the line just a boatlength ahead of his rival, narrowly averting the embarrassment of a Pom winning the Aussie Nationals.

Perhaps neither of the front two would have won had Brett Morris managed to hold on to a decent score in the concluding race. Yesterday in the one light race of the day, Morris surprised himself to drift across the line in first place. Today the Port Melbourne competitor proved that Saturday's performance was no fluke as he motored up the first beat of the first race in 10 to 12 knots of shifty breeze to take a significant lead at the first mark.

This evening Blairgowrie Yacht Squadron is putting on a slap-up feed for the international competitors who can let their hair down knowing there's a day off before the big battle begins on Tuesday 9 January, day one of the ACO 9th MUSTO Skiff World Championship.

Entry opens for IRC European Championship and Commodores' Cup + all RORC races on 8th January 2018
At midday on Monday 8th January 2018 entry will open for all Royal Ocean Racing Club (RORC) races, including the Season's Points Championship comprised of 14 races, as well as the highlight of the UK Solent season - the IRC Europeans and Commodores' Cup.

Competitors entering the IRC Europeans (8-16th June) are invited to form a team of three boats with members of their own yacht club or with boats from their region. Alternatively, contact the RORC Race Team who will provide a list of boats entered, but not yet part of a team.

The biggest contest in the 2018 RORC programme is the Sevenstar Round Britain and Ireland Race on Sunday 12th August. At 1,805 nautical miles, it is three times longer than a Fastnet Race and attracts experienced offshore sailors looking for a serious challenge. Starting and finishing in Cowes, it is on a four-year cycle due to the toughness of the race. Circumnavigating all the islands of the UK, including the most northerly point Muckle Flugga, it negotiates headlands with tidal challenges all around the UK and faces the notorious British weather.

The Royal Ocean Racing Club's UK domestic season fires up with the Easter Challenge (30th March to 1st April) and offers crews the chance to work on pre-season training and fine-tuning. With the relaxation of RRS41, the highlight of the event is the availability of a selection of experienced coaches on the water to assist with getting back up to speed.

The breeze was on at 16 knots from the East which got the temperature up into the 60's. It was a shifty again with the wind coming over the key onto the track.

Magnus and I went into the day one point behind Jack Jennings and Frithjof Kleen. But today was to be our day. In race one, we started at the pin and never looked back. Jennings and Kleen were in 5th at the first mark but their speed brought them up to second but the final run. Diaz/Prada were also sailing well and finished third.

So going into the fina race it was "who beats who" to take the Levin Trophy for 2018. Magnus and I had a conservative start under Diaz/Prada. Jennings and Kleen were slightly ahead as we all taked onto port. Our speed was superior and we slipped out front and to leeward of the pack. We then got a header. The whole fleet flipped over onto starboard and Magnus and I wete on top of the fleet. And that's where we stayed.

Jennings/Kleen finished second with Diaz/Prada in third. And that was the order for the regatta. My hat is off to my crew! Magnus is 64 years young. 5 races in 16 knots in two days is hard on anyone, but Magnus is ageless. A gold medalist in 2000 the man is a true athlete, mentally and physically. Here to you Magnus!!

The next event will be the Masters regatta February 3, 4. followed by the Walker and Midwinters the following weekend. -- Paul Cayard

For complete results go to www.yachtscoring.com/emenu.cfm?eID=4455

Steering Export Roo, with same crew of David Chapman and Gerry Mitchell, Cooper scored two third places and a win on day one of the 2018 World Championship on his home waters.

This has given Export Roo a commanding early lead in the four-day, 12-race regatta for these high performance, one-design sportsboat, crewed by three or four sailors, men, women and teenagers, with skippers ages ranging from 13 to 60 years plus.

The Hobart businessman lost the 2017 Worlds on The Solent at Cowes to noted British yachtsman Jerry Hill by two points, with Hill using his own local knowledge in the final race.

Cooper has avowed revenge and is not only leading the 2018 Worlds but is also 24 places ahead of Hill, who today placed 4-38-28 in sportsboatworld.com -- Peter Campbell

Helming Give Me 5 - French Youth Team, Follin (FRA) this afternoon won his third out of six races in the SB20 pre-Worlds regatta, taking out the last race with French flair.

In 2015 Follin became the first and only youth sailor to win an SB20 World title, at Trentino in Italy, and still qualifies for the youth division at the age of 25.

Follin and his crew also won the Youth and Corinthian trophies for the Pre-Worlds. The Masters went to Jerry Hill (GBR) the current world champion.

Each Friday of the Series, SAIL22 and North U are combining forces for the Porch Series to offer practice races and coaching. Racing concludes at Davis Island Yacht Club on February 9-11.

Complete results may be found at yachtscoring.com/emenu.cfm?eID=4360

Rummaging through the new Seahorse, while waiting for my copy of 'Fire and Fury' to fall through the letterbox, I found little new on the controversial AC75. Well, nothing except the focus-group generated tag of 'DeLorean' that we are now all expected to use when discussing the foiling configuration of the beast. The theme is 'Back to the Future' apparently...

I am still optimistic about the entertainment value of TNZ's leggy monster, but for those of us once involved in good governance, and indeed anyone with a basic knowledge of automobile engineering, the surpassingly naive DeLorean brand association is not exactly encouraging.

- £77m of taxpayers' cash was sunk into DeLorean, including nearly £9 million siphoned off directly through fraud.
- Parliament branded the project: "one of the gravest cases of the misuse of public resources to come before us in many years".
- The management were said to have conducted "a shambles, a fantasy and an orchestrated pantomime".
- Towards the end of the debacle, DeLorean himself, was described as, "in a disturbed state, and possibly not wholly rational".

On the technical front, the 'futuristic' vehicle was 'all show and no go'.

- It was slower than the little Fiat Berlinetta I had back then.
- New and untested technologies were found to be wholly unsuitable and had to be dumped.
- Engineering problems and budget overruns delayed production for three years.
- Early models ran out of juice and ground to a halt by the roadside. The electrical system was so weak that even the horn was inaudible.

The entire car had to be re-engineered from the ground up by legendary Brit Colin Chapman.

On the upside, John DeLorean's imaginative plan to balance the books with a little drug dealing was relatively successful. His lawyers cited 'entrapment' and kept him out of prison to file for bankruptcy and flog his assets off to a certain Donald J. Trump.

Captivatingly good looking sailing yacht from the Spirit stable, built for regattas and family sailing. She accomplishes both tasks with total panache. British yacht building at its very best and she is maintained to the highest standards. Exceptional Spirit 60DH - the head turning is free. The yacht is recently varnished with Awlgrip 2 Pack varnish which has great endurance properties.

‘Windward’ was launched in May 2014 and is ready for racing or cruising. Currently lying in Hong Kong, she is available for immediate delivery.

One of the original Iconic Maxi yachts is now available. She was originally built as the world famous 'Boomerang' under an IMS rating rule. Then converted to life in the Maxi fleet where she achieved first class honours for many years on the circuit.

Still maintained to the highest of quality, this is a really attractive all round proposition and offers a truly huge amount of bang for your buck!!