New Champions Usher In New Era For Skiff Sailors
Matasinhos, Portugal: Another day meant another obstacle from mother nature at the 2017 International 49er and FX World Championship, where an unstable land breeze teased the gold medal fleets this morning for their 10 AM start.  Both the men's 49er and the women's FX skiff started races in 6-10 knots of Easterly breeze, only to see the wind shut off completely as they headed to their respected finish lines.

Some of the 140 teams from 27 nations were jumpy with anticipation and all enjoyed the warm summer Portuguese sun as they waited on the water for the forecast Northerly to fill in, and after nearly 2 and a half hours, it filled quickly. 8 knots became 12 became 16 gusting near 20 knots, allowing the men's 49er fleet to pick up four more races and complete their championship.

Spectators were treated to a full brawl between these top female athletes, with three teams from three different continets battling for the all-important podium spots and the title of 2017 World Champion. It was Rio 2016 all over again, and when leading Rio Bronze Medalists Jena Hansen and Katja Iversen (DEN) capsized with a huge lead during the penultimate race of the event, Rio Gold winners Martine Grael and Kahena Kunze pounced, taking a 2nd place with third place Alex Malone and Molly Meech (NZL, Rio Silver Medalists) took the win.

Reigning European 49er Champions Dylan Fletcher and Stu Bithell (GBR) had a smoother road than the Danish champs to their first-ever World Championship win, but training partners James Peters and Fynn Sterritt still had a mathematical chance to take them down going into the final race of the championship.

Peters/Sterritt would complete the front row lockout for the British Sailing Team by taking their first Worlds podium, with Austrian standouts Benjamin Bildstein and David Hussl finishing out the money spots and the 2017 Worlds.

2017 Tornado Worlds: Day 3 and Rest day
Multiple world champion Iordanis Paschalides and his 18 y.o. crew Petros Konstantinidis from Greece are getting closer to the title of the world champion as after six races of the they are stable at top of the overall ranking with just 5 points, scoring five first places and one 4th

Steady in the 2nd place of the overall classification with 10 points remains the twin and ex European champs Nikolaos Mavros - Alexandros Tagaropoulos who was 3rd on the first Saturday race and 1st in the second.

In 3rd place overall is the German boat with Bob Baier - Marc Baier having a great date today. Kostas Trigonis and Stavros Tavoularis made their best appearance so far in this world championship and moved to the 4th position of the general ranking after finishing in 2nd and 3rd place in the last two races and are now also claiming a place on the podium of the winners.

Jürgen and Sarah Jentsch are the leaders in the Mixed division. But Zibi Piekarski - Dominika Haltmarova are close behind with just 2 points difference, standing in 2nd. Zdenek Pavlis-Michaela Pavlisova and Markus Betz - Monika Schuster stand in 3rd and 4th place respectively having equal points and ONLY 2 points difference from Piekarski / Dominika.

Offshore racing can offer a brutal environment, which is why those who participate seriously are always testing their limits. Equipment also needs to perform to a similar level in the same conditions but has to remain completely reliable under every circumstance. Whether a big professional programme or a Corinthian Vendee racer, failure is not an option.

It is in this milieu that, 35 years ago, Facnor started developing furling systems that could assist sailors in controlling the power needed to cross oceans fast, but at the same time be safe and reliable. Not an easy task.

Full article in the September issue of Seahorse: seahorsemagazine.com 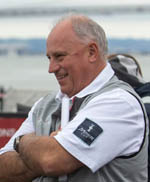 Widely recognised for his achievements, Iain's experience from the 2008 Olympic Games, multiple World and Australian Championships and consecutive 18ft Skiff titles will serve the Team well.  He is a respected tactician and boat designer who, many decades after his first Australian Championship win in 1973, continues to compete, most recently at Hamilton Island Race Week.

Iain has a long connection with the America's Cup serving as Regatta Director for the 34th and 35th America's Cup campaigns in 2013 and 2017 respectively and was CEO of America's Cup Race Management.  In the 1983 America's Cup challenge at Newport, he sailed on Syd Fischer's Advance and in 1987 co-designed and skippered Kookaburra in their campaign against Dennis Connor's Stars and Stripes off Fremantle.

Iain formally commences with Australian Sailing on Wednesday 4 October after competing in the 2017 Etchells World Championship in San Francisco.  Prior to his departure he will be meeting with key Performance staff at the National Training Centre (NTC) in Sydney. -- Jane Gordon

All the success goes to Igor Rytov's RUSSIAN BOGATYRS who has confirmed that he is the strongest team this season in the International Melges 20 Class fleet.

The final event also served as the Russian Open in which Dario Levi's FREMITO D'ARJIA finished up in second, Onorato came third.

The next Melges 20 World League event, number thirteen on the circuit out of sixteen is the World Championship taking place in Newport, RI hosted by the New York Yacht Club on October 2-7.

Maxi Yacht Rolex Cup
The 28th Maxi Yacht Rolex Cup gets underway Monday and the talk on the dock is enthusiastic about the prospect of a week of high quality racing among the behemoths of the sailing world.  50 yachts, all over 60 feet, have entered and are primed for the sporting contest that lies ahead. With the organizing club, Yacht Club Costa Smeralda (YCCS), marking its 50th anniversary this year, there is an evidently positive and celebratory mood among the owners and crew despite strong winds having kept boats tied firmly to the dock over the past two days.

The Mistral winds currently dominating this area of the Mediterranean are expected to subside overnight. Mike Broughton, the navigator on Claus-Peter Offen's 100-foot Y3K, explained that most weather models had suggested the wind would die this afternoon, but that the one thing predictable when racing here is the unpredictability of the wind: "My feeling is that the high mountains of Sardinia and Corsica have most probably kept winds stronger for longer than expected."

Assuming the forecast holds, racing begins at 11.30 CEST tomorrow, 4 September, and continues through to Saturday, 9 September.

In a new Town Cup three-race/no discard series format, which replaces the traditional one-off race on the final Saturday, competition has been intense. On equal points with one race win apiece from the first weekend Glorious Fools and the Corby 29 Double Trouble sailed by Duncan Haley had everything to play for in today's Town Cup shoot out.

In probably the most wind of the week, reaching no more than 7-8kts Hayley and team sailed well off the line and revelled in conditions; lots of light airs beating, which is the perfect scenario for Hayley's Corby 29 Double Trouble. So quick in those conditions, Double Trouble was leading overall on handicap by three or four minutes. However, a six-mile final run from the mouth of the River, was time enough for the Team Glorious Fools to reel in their opponents and take the overall Town Cup win.

Despite the lack of wind, the Dragon class enjoyed close racing. The boat to beat this week was the skillfully sailed Pageboy XI with Paul Taylor at the helm and crewed by Graeme Page and David Brown.

In memory of the late John Torrance, an active dingy sailor who passed away suddenly nearly a year ago, a special race in his honor was held mid week. Of the total 35 dinghies that took part a National 12 (Ben Harden) won the fast handicap fleet, while the slow handicap was won by an RS Tera Pro (Milly Drew).

Groupama Race - The world's longest windward/leeward race
Though considered a race in paradise, like previous editions the sixth biennial Groupama Race around the island of Noumea will prove tactically difficult for all crews who accept the challenge.

Taking between two and a half and five days to complete the 654 nautical mile course due to start on June 17, 2018, the fleet of monohull and multihull yachts will trace a course around New Caledonia, a jewel of the Pacific southwest.

French yachtsman Michel Desjoyeaux, a two-time winner of the Vendee Globe, said, "The weather forecast is beautiful almost all the time. The country is majestic, still very wild, sparsely inhabited with miles of land virtually untouched.

"I was invited to be part of the 2016 race and I was excited at the prospect of visiting New Caledonia, a wild and enchanting island with smiling people who take the time to say hello." An offshore and coastal race

There was little time for pleasantries on Simon Hull's Orma 60 Team Vodafone on the first day of their 2016 race, given they were running under spinnaker at 30 plus knots of boat speed (55 kph).

Placed exactly in the axis of the tradewinds, the Groupama Race is both an offshore and coastal race that offers sailors the opportunity to strategize and navigate the best route based on the sea state, currents and weather. For Desjoyeaux, "the Groupama Race is an Olympic course on the scale of an island."

The route is simple enough. Under the direction of the organising club, Cercle Nautique Caledonien Yacht Club, the fleet start off their journey in Noumea and finish back at Noumea with only two compulsory points they must pass on the northernmost point of the island.

When the fleet passes the southernmost point of New Caledonia, high-speed downwind rides are possible for the next 24-48hrs.

For the first time in Groupama Race history, four different feeder races leaving from Sydney, Melbourne, Brisbane and Auckland will coincide to deliver their respective fleets to Noumea in time for the June 17 start.

Maxi 79 Racer OURDREAM is a beautifully refitted maxi racing yacht that is easily sailed and perfect corporate or fun platform for both inshore and offshore regattas. Recent refit to a high standard means low running costs.

The first dual-purpose cruiser/racer from the McConaghy/Ker partnership. Huge promise whilst on the race track as usual, but some proper interior comfort.

Stunning cruiser / racer from the board of Botin. Extremely fast and comfortable, with a chic interior and very competitive inshore and offshore.

The Last Word
All the powers in the universe are already ours. It is we who have put our hands before our eyes and cry that it is dark. -- Swami Vivekananda