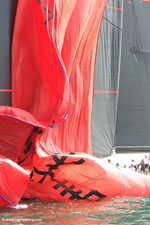 On the same Newport, Rhode Island waters where the legendary Ranger cleaned up 4-0 in 1937, the last time ever that the mighty J Class raced for the America's Cup, the first J Class World Champions are Lionheart, the owner driven Dutch-flagged modern day Ranger descendent.

Low risk strategies employed on a fast, fully optimised, well travelled owner driven J Class sailed by a well drilled close-knit crew which have mostly been together since 2011 prevailed. They finished no worse than third and only won one race, but they eclipsed the highly fancied Hanuman which only returned to J Class racing this season after a three year hiatus.

The shiny, black hulled Lionheart, JH1, was built 75 years after the original design was made as part of a family of designs by Starling Burgess and Olin Stephens for Ranger, the so called Super J which dominated in Newport. Over recent years the Palma, Mallorca based Lionheart has probably sailed at more regattas than her rivals, J Class and otherwise, in the pursuit of improvement, training and optimising religiously.

Clipper Race team diverts to Portugal following Skipper injury
One of the twelve teams competing in the 40,000 nautical mile Clipper 2017-18 Round the World Yacht Race is diverting to Porto, Portugal, after the team's Skipper suffered a serious injury to his left hand which requires emergency medical attention.

The incident occurred on board Greenings to Skipper David Hartshorn, 52, a British professional sailor, at approximately 23:00 BST last night on day seven of the opening leg of the Clipper Race, from Liverpool to Punta del Este, Uruguay.

Clipper Race Director Mark Light explains: "The incident occurred around 450 Nm off the Portuguese coast whilst David was leading a spinnaker drop in breezy conditions. Unfortunately, his left thumb became caught in one of the lines which has resulted in some serious damage.

The decision to divert to Porto was made quickly following assessment from the race's remote medical support physicians at PRAXES as well as the team's onboard medic, that an urgent operation is required.

The yacht is under good control between the Clipper Race Coxswain and Skipper and all other crew are safe and well. David himself is currently in very good spirits, being constantly monitored, and has been given morphine and antibiotics.

Due to the distance from Porto, which is estimated to be approximately two days sailing away, options are currently being examined for a medevac to be organised before the yacht reaches land.

The first teams are expected to cross the finish line in Uruguay around 20 September.

Price Wins 10th Anniversary Detroit Cup
Detroit, Michigan, USA: In a 3-1 performance in the Semi-Finals against Will Boulden (AUS) and 3-0 score in the Finals against Ryan Seago (USA), Harry Price (AUS) and his team of Murray Jones and Cameron Seagreen have successfully defended their title at the 10th Anniversary International Match Race Regatta for the Detroit Cup.

This was an impressive show of match racing talent by the to both the competitive field of 8 teams from 5 nations, as well as the crowds on shore of the event's host, Bayview YC. In conditions that ranged from light and fluky to moderate over the four days of competition on equally-matched Ultimate 20's, and all the while sailing in the strong currents of the Detroit River, Price and his Sydney-based DownUnder Racing team from the Cruising YC of Australia dominated the field, with only 2 losses in 21 matches in the first stage triple Round Robin.

The win makes Price the only two-time winner in the history of the event, and will help solidify the team's current 6th place ranking in the World Sailing Match Race Ranking List.

The Detroit Cup was the second stage of three events in the 2017 USA Grand Slam Series, with the next being later this week at the Oakcliff Sailing Center in Oyster Bay, NY.

Seahorse September 2017
What's in the Latest Edition Of Seahorse Magazine 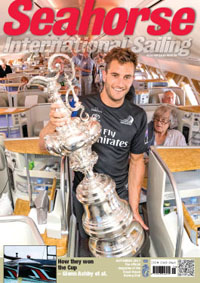 Design - Welcome back
A long time ago (boys and girls) there was a fast type of yacht called the GS34. And now it looks like there is about to be another one...

Tomorrow's (IRC) design today
Bernard Nivelt has led the charge to lighter, faster IRC designs. And this is the fastest one yet...

One year on
It's not just the foiling multihulls racing ahead

World Sailing - Some legacy
Give me a fast boat, any fast boat. Andy Rice 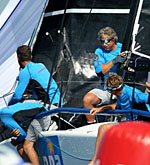 Right up until the last, runner-up Edoardo Lupi and Massimo Pessina with tactician Lorenzo Bressani sailing TORPYONE gave every ounce of effort, leaving only two points of separation from the leader going into the final race, prompting a literal cut-throat start to Race Ten.

This is the second time in three years that this brilliant, very exciting Melges 32 team has been the runner-up to accepting the Worlds trophy. But, they do not leave the 2017 season empty handed. As reigning Melges 32 European Champions, they will commence the 2018 circuit with more determination than ever before, all sights set on the next World Championship encounter.

Zhik 29er European Championship
Federico Zampiccoli and Leonardo Chiste remained calm and collected going into the last day of the Zhik 29er European Championship. The Spanish duo of Andres Barrio Garcia and Nestor Vega were just 5 points behind and aiming for the title, but with only 1 race sailed on the final day, were unable to pass the speedy Italians. Instead, the Swedish team of Kasper Nordenram and Axel Pantzare excelled in the light air finishing 2nd in the race to move past the Spanish and into second overall.

The top female team was Margherita Porro and Sophia Leoni (ITA) who finished 4th overall. Zampiccoli and Chiste were also the top youth team. For many countries, the Europeans were their selections for the World Sailing Youth Worlds to be held in Sanya, China in December.

Leg one of this four stage, 1000 nautical mile race east across the Baltic took the boats 24 hours, after starting from Germany's 'Sailing City' at 1300 yesterday.

"Our tactician from the UK, Hugh Brayshaw, did a super job last night, all of the team did a good job," said the winning team's skipper Michael Tarabochia. "We sailed the right angles and we worked hard the whole day."

The crews spent much of the first leg following the Danish coast. This was mostly upwind and made for few tactical options. For example the Swedish crew dived south during the evening in search of stronger wind, but this didn't pay.

Despite the newness of the one design ClubSwan 50s, and their crews still being unfamiliar sailing them, the racing was extremely close. During the leg at least three of the yachts led. Ultimately the German crew finished just two minutes 20 seconds ahead of Cape Crow Yacht Club (Team Sweden). The top four boats finished within 13 minutes with Nyländska Jaktklubben (Team Finland) third and the local heroes on Frederikshavn Sejlklub (Team Denmark) fourth. Lord of the Sail - Europe (Team Russia) was fifth, still within half an hour of the winner.

Leg two of the Nord Stream Race, from Copenhagen to Stockholm started on Saturday. At 470 miles, by far the longest leg. -- James Boyd, www.sailingintelligence.com

New York YC Dethrones Noroton YC at Grandmasters Team Race
Newport, Rhode Island, USA: In the six previous editions of the New York Yacht Club Grandmasters Team Race, the home team has finished second five times and third once. That track record of consistent success would be something to crow about were it not for the fact that Noroton Yacht Club, from Darien, Conn., won the event each time.

Cup capers continue in Auckland and Bermuda
Two months have now passed since New Zealand won the America's Cup, with not a lot being forthcoming on how the next event will shape up.

What has been released is a big improvement on what was produced in the run up to the last four America's Cups.

On the 35th America's Cup on Bermuda, it is incredibly disappointing to see the America's Cup video content taken down off Youtube, a month after the event concluded.

This does not just include the media conferences and other reports that were produced on a daily basis, but everything going back to, and including the previous 2013 America's Cup in San Francisco.

Those Cup fans who follow the traffic on the old 2013 San Francisco videos will know that they kept getting replays and had some very good viewer numbers.

There was an enormous of content generated during the 35th America's Cup - and many fans will not have got around to viewing all of it. Now it would seem to have vanished for ever.

For all the comment from those involved in the Golden Gate YC's team and marketing/event management arm about wanting to lift interest in the America's Cup, and sailing generally, this seems to be a very strange way to do it.

How does it benefit the sport to have all official footage and images suppressed a month after the even? -- from Richard Gladwell's editorial in Sail-World.com

* From Ian Chesterman: In his editorial Paul Waring has missed the point of the CIM rules- they are in place to preserve the classic look of the classic fleet. Yachts such as Mariquita, Moonbeam, Tuiga etc. would not have their timeless beauty if rigged with modern composite sails. He is also incorrect when he says that modern sails do not make boats go faster, as I'm sure any modern sailmaker would be quick to point out.

Modern laminate sails hold their designed and built shape when loaded by the wind, transferring more load to the boat which gives more driving force but also higher strains on rigs and rigging- strains that boats rigged with wooden spars and with chainplates attached to wooden hulls were not designed to take.

Fast, comfortable Oyster 37 cruiser/racer has a proven track record having taken part in the infamous 1979 Fastnet. Continually maintained and upgraded this all-time classic of a yacht is most certainly worth a viewing! With recent cosmetic and safety upgrades she is ready to be cruised or raced.

RKO is a hugely optimised example of these designs, benefiting from a very high spec North 3Di sail package, which caters for both inshore and offshore racing alike. Additional upgrades include a complete cosmetic overhaul and the addition of standing carbon rigging - this is a race winning machine

The results really do say it all with this unrivalled French design from JPK. Two years of great success under the belt and no signs of stopping just yet. "Sunrise" is currently the only 10.80 on the market today and is a turn key boat for Commodores Cup 2016 and beyond. OPEN TO OFFERS.

The Last Word
Old people don't like swearing, because a lot of the words weren't invented in their day, so they feel left out. -- Zoe Gardner