Announcement On The 36th America's Cup
The Royal New Zealand Yacht Squadron and Circolo della Vela Sicilia as the Challenger of Record, together with their respective representative teams Emirates Team New Zealand and Luna Rossa Challenge, are pleased to announce that the Protocol establishing the parameters for the 36th America's Cup will be released in September 2017.

The proposed dates for the event will be further detailed in the Protocol but the Defender and the Challenger of Record are considering the possibility of the 36th America's Cup Match and the preceding Challenger Selection Series being conducted in Auckland in early 2021 during the New Zealand summer.

Both Team SFS, debutants this year, and Tresors de Tahiti head to the Mediterranean, to Roses in the Province of Girona on Spain's Costa Brava where racing starts Friday separated by a tiny margin after five of the nine Acts of this Tour have been sailed.

After Team SFS were docked nine points at the end of Act 4 Arzon for shipping an out of class anchor which was measured to be too light by two kilos, Sofian Bouvet's team have delivered the perfect riposte, heading for the waters they know best.

The leaderboard for 2017's 40th edition contrasts nicely with last year's when Lorina Limonade-Golfe du Morbihan had won three of the first four Acts and lead from their native Atlantic coast to the Mediterranean with a whopping 26pts margin. After starting poorly in Dunkirk, the champions lie eighth, overshadowed so far by the 'Mojito Kids' their younger, amateur counterparts on the Lorina Mojito-Golfe du Morbihan programme who lie sixth.

This time the Tour leaders Tresors de Tahiti have so far won only one discipline the Stadium Super Final in Arzon-Port du Crouesty, south Brittany, which they bolted to a good second in the coastal race there. But in Fecamp, Normandy they went 9-9.

Team Oman Sail head to the Med on target for their goal this edition, seeking to finish on the podium. Stevie Morrison, Thierry Douillard and the crew finished in fifth today's Super Final, losing a place in the dying breaths of the race, but remain pleasingly consistent.

Hugo Rocha and the New Territories team head to Roses in their native Spain lying in 14th place in the 29 boat line up. After losing their mast overboard when a pin failed the British crew on Team Maverick SSR lie 24th overall.

Seahorse July 2017
What's in the Latest Edition Of Seahorse Magazine 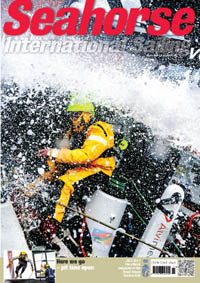 Not so simple
Who better than a cycling nut to send to unravel Emirates Team New Zealand's 'power cell'? Richard Aspland

Biggest Copa del Rey MAPRE in History
The number of pre-registered entries for the 36th Copa del Rey MAPFRE already exceeds the all-time high of the regatta, established in 2015 with 136 competitors. The organization of the Real Club Náutico de Palma expects to reach 140 teams of 24 different nationalities.

The Organizing Committee is confident that the number of participants will reach the 140 established as the limit.

The second wildcard to be announced, following the entry of FNOB Impulse, will be headed up by Olympian and Extreme Sailing Series veteran Mitch Booth; co-creator of the Extreme 40, the original catamaran used in the Series.

"It will be a pleasure to come back to the Extreme Sailing Series in Barcelona, so close to my home," said Booth, who lives in Catalonia and has competed numerous times in the Stadium Racing Series, the last being in 2015 as co-skipper of Team Turx.

"Especially as it is the 25th anniversary of the Barcelona Olympics, where I competed in the Tornado class and won a bronze medal," added Booth, who has dual nationality and has represented both Australia and the Netherlands in four Olympic campaigns, also taking silver in the 1996 Atlanta Olympics in Savannah.

"I am really looking forward to racing in some of the finest conditions in the Mediterranean against some of the best-known faces of the Extreme Sailing Series, including some of the greatest sailors in the world."

The line-up features a wealth of experience, including Simon Fisher (GBR), who returns for his fifth Volvo Ocean Race appearance after lifting the trophy as the winning navigator with Abu Dhabi Ocean Racing last time out.

He is joined by two-time winner Phil Harmer (AUS), who is hunting a Volvo Ocean Race hat-trick following successive victories in the last two editions, five-time sailor Damian Foxall (IRL), who scored a win in 2008-09 onboard Ericsson 4, and Race veteran Tony Mutter (NZL), who returns for a sixth lap of the planet, having gotten his hands on the trophy twice in the past.

Between them, the crew have competed in the Volvo Ocean Race over 20 times

The team are currently preparing to travel to Gosport, UK, for pre-race activation and Leg Zero commitments, lining up against the other teams for the first time in the Round-the-Island race during Cowes week, followed by the Rolex Fastnet Race, and finishing up in Lisbon after sailing via St. Malo in mid-August.

Rhode Island event set to honor Ted Hood
Ted Hood made sails, designed yachts, won the America's Cup and helped turn a parcel of land in Portsmouth, R.I., into a marine business hub. This coming weekend the Designer Series will be a three-day event that celebrates all of Hood's contributions to the boating world.

"This event will be a first," Ted Hood Jr. of Newport, R.I., said in a statement. He worked with his father from his teen years until the family business was sold in 2000. "It will be all encompassing, with all the varieties of Hood designs - from his earliest to his latest. We hope to showcase that diversity since my father was not just one brand."

The Designer Series will take place at the Herreshoff Marine Museum in Bristol, R.I., from Friday through Sunday. The fleet will range from a 21-foot sloop with a lifting keel to the 116-foot Whisper, which was built in the Netherlands and was one of the last boats created by the Ted Hood Design Group. There also will be many Little Harbors and Bristols, two lines for which Hood is known.

The original Robin, a 40-foot sloop that launched Hood's career in 1959, will be on hand. Hood skippered the boat to many regattas during its first summer. He designed about 30 boats named Robin during his career, as well as the 12-meter Nefertiti that almost won the 1962 America's Cup. Hood won the 1974 America's Cup as the helmsman of Courageous.

On-water events for the fleet will be held Saturday, including sailboat racing and a log competition for powerboats. Tickets will be on sale for an "open-boat" party Friday evening so attendees can view and board the fleet.

On Saturday night there will be a clambake that is open to the public. Sunday will feature a boat parade along Bristol's harbor front.

NB Sailsports is currently seeking expressions of interest from Finn sailors who would like to join the academy in October 2017. The objective of the EOI is to help plan, provide and meet the expectations of sailors, coaches and teams that may be considering visiting the academy in the coming Australian summer.

NB, and its coaching team of Ed Wright, Rob McMillan and Rob Brewer, is initially offering a programme of training, racing and regattas on Sydney Harbour and in Melbourne between 16 October and 22 December. An additional training block may also be scheduled after Christmas for those who do not intend to travel to the World Cup in Miami.

Rob McMillan has been a successful Finn sailor since the late 1980s, first in the UK with several Olympic campaigns, and then in Australia. Ed Wright is a former World and European Champion, and has hit top form again recently with a second place finish at the 2017 European Championship.

We recently have received a 500 Euro fine for having red diesel in Oostende, Belgium.

We had just the day previously competed in the EAORA Graham Wallis Trophy Race (6th July 2017) from Harwich to Oostende and were enjoying a lay day in Oostende before racing back to the UK on the following day.

At approximately 1500 local time I received a message from a member of the crew still on the boat that my presence was required. I promptly left the terrace of the Royal North Sea Yacht Club to return to the boat. On my arrival I found 2 uniformed and armed customs officers and 2 other officials who I later learned from the custom officers were 'Officials from Brussels'. The Customs Officers proceeded to inform me that they needed to check my tank, I told them I had Red Diesel and had a receipt for it but that didn't seem to make any significant impact. they then proceeded to pump a test amount out the tank and showed me that (low and behold) it was red diesel.

Then followed a lot of form filling and checking of papers (Ships Register, Insurance, Radio Licence and crew passports and ID) before producing a card terminal.

I believe that a couple of other yachts participating in the event also had their papers checked.

The Customs officers where friendly and courteous, but where very insistent that Red Diesel was illegal for pleasure craft and white diesel is easy to obtain in the UK.

The whole incident has obviously left a bitter taste and we won't be returning to Belgium any time soon, and whilst I can't speak for the East Anglian Offshore Racing Association there was a general feeling that they wouldn't be returning to Belgium until this issue was resolved, with 3 races a year to Belgium with one scheduled in September to Oostende this could potentially be quite a significant impact to the competitors and organisers.

As these events have been running since my grandfathers time it would be a shame for them to changed due to this difference in laws.

Barking Mad is a world championship level Farr 30 that has been full-time professionally maintained to the highest degree with no expense spared to keep it in better-than-new condition.

Libertist is freedom, speed, and sheer joy of sailing. It is of the best quality and innovative materials. Very light, equipped with minifoils, rotating carbon mast, and ample electronics. The trimaran has been created for demanding sailors who love their sport.

An 8.50 m trimaran designed by Erik Lerouge. Very light, equipped with permanent minifoils, a rotating carbon mast and ample electronics. A real cruiser-racer made of high quality materials in a renowned Polish shipyard. It guarantees great sailing satisfaction at a very competitive price.

Samurai is the image of this boat. A Samurai traditionally has been a person who serves a well respected leader and has “Busido” spirit meaning they have the drive to fight with every effort and dedication to the best of their ability and skill.

The Last Word
People later thought 'Lucy In The Sky With Diamonds' was LSD. I swear-- we didn't notice that when it first came out. -- Paul McCartney