Volvo Ocean Race organisers promised the most radical shake-up of the race since its inception in 1973, and the raft of changes announced today for the 2019 edition will bring about some fundamental shifts in what the Volvo Ocean Race represents.

A huge topic of discussion has been the choice of new yacht class, which organisers had previously confirmed would be a one-design by Guillaume Verdier, but not revealed whether it would be a monohull or multihull format. Volvo Ocean Race CEO Mark Turner has confirmed that the ocean legs will be sailed in a foil-assisted 60-footer, in many ways the least surprising announcement of the day following the adoption of foils by the IMOCA 60 class over the past two years.

More intriguingly, Turner now sees potential for the new Volvo one-design 60-footers to potentially compete alongside the IMOCA fleet. Speaking exclusively to Yachting World in Paris ahead of today's announcement, he explained: "We found ourselves looking at the fact that the best boat for the Volvo Ocean Race, which is a combination of performance, safety, technology development, actually can also be used as a platform - with a change of rig and keel - on other circuits. That's a bonus to what we're doing."

While the new one-design will not be specifically designed to fit the IMOCA box rule, Turner says that the wealth of data and experience Verdier and others have in designing and building foiling 60-footers will be invaluable, and was a key reason in not going for a larger design such as a 70-footer.

Assuming that the IMOCA class rule in, say, 2020-21, remains open to ex-Volvo Ocean Race boats, this plan achieves several things which fit with recurring themes in Turner's new vision for the race, including improved sustainability credentials - building large composite yachts with a short shelf-life no longer sits well with the event's green ethos - as well as giving sponsors and sailors wider platforms with more longevity to promote their message across, and joining some dots in the sport.

Meanwhile a second, inshore fully foiling multihull class has also been announced, between 32 and 50ft long. This will be raced at stopovers by - at least very largely - the same crew who are racing the offshore leg to prevent teams from forming two separate squads. Again this will be a one-design, taking the best elements from existing foiling multihull classes, such as the GC32 and rapidly developing AC50s.

Eight 60-footers will be built, and the multihull one-design drawings will be put out to tender, a process starting this week.

The changes most likely to upset purists will be major alterations to the traditional round the world route. Details are yet to be confirmed, but Turner has revealed that they are considering a radical overhaul of the course, starting with plans to run events more frequently, through to routes that include everything from around-the-world non-stop, to starting and finishing in a different hemisphere or continent, and even a non-stop race around the bottom of the earth. 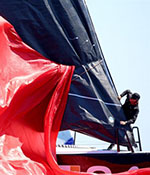 Scarlino, Italy: Harm Muller-Spreer's Platoon crew got the better of the five-time title holders Quantum Racing during an exciting winner takes all final day showdown to win the Rolex TP52 World Championship title for the first time. Though they did not win a race, only once in eight contests did Platoon finish out of the top three, counting five second places. Third in 2008, losing out on the final day in Puerto Portals to finish third, this time the Platoon crew stayed super focused and closed out their first world title together.

With the last day programme on the waters off Scarlino, Tuscany cut to just one race as the WNW'ly breeze took time to build the regatta leaders Platoon started the grand finale with a lead of two points over Quantum Racing. The defending world champions made the better start, Platoon faltering momentarily. But tactician John Kostecki and strategist Jordi Calafat stuck to Platoon's game plan, investing progressively in the right side, staying out of the fray, sailing clean lanes to allow their speed edge - particularly downwind - to work.

While Azzurra enhanced their early lead by getting to the paying, favoured right side of the first beat, Quantum Racing found themselves sandwiched between two other boats, unable to get there in time. In the 14-16kts breeze, Platoon were quick upwind and rounded the first windward turn in third, already seemingly with their hands on the world title. As Azzurra went on to win, Platoon passed Bronenosec on the second round to win the world championship title by seven points from Quantum Racing, who won the title last year in Menorca.

At the theoretical midpoint of the season, with three of the six regattas sailed, Platoon lead the 52 SUPER SERIES by four points going into next month's Audi 52 SUPER SERIES Sailing Week in Porto Cervo. Azzurra lie second and Quantum Racing third, 14pts off the lead.

Antigua to Bermuda: Tenacious finish
Hamilton, Bermuda, May 20: All teams racing in the Antigua Bermuda Race arrived in time for Saturday's prizegiving at the Royal Bermuda Yacht Club. Tim Wilson's Australian classic ketch El Oro, led the group of corinthian teams that have refused to put on their engines, showing tremendous tenacity in sticking to sail power only for over a 1,000 miles of light airs sailing. El Oro crossed the finish line at St. David's Light shortly before 21:30 local time on Friday May 19th and in doing so claimed second place in CSA Classics and third in IRC.

At around midnight Friday night, Jason and Judy Payne-James' Dufour 45, Heartbeat IV crossed the finish line in Bermuda. Their ship's log showed that the team of family and friends from the East Coast of England, had clocked up 1,007 nautical miles. Co-skippered by President of the Royal Burnham Yacht Club, Judy Payne-James, Heartbeat IV has now competed in every well-known offshore race in the Northern Hemisphere. She has a berth at the Royal Bermuda Yacht Club for the duration of the America's Cup and Judy says: "They will be proudly waving the Union Jack and cheering on Ben Ainslie's Landrover BAR team."

The final yacht to finish the Antigua Bermuda Race, entirely by sail-power alone, is Andrew Eddy's British Oyster 485, Gaia whose crew includes wife Sabrina and 19 year old niece, Phoebe Cochran. This is the first time Gaia and the Eddy's have been to Bermuda and they have raced here to watch the 35th America's Cup. -- Louay Habib

Seahorse June 2017
What's in the Latest Edition Of Seahorse Magazine 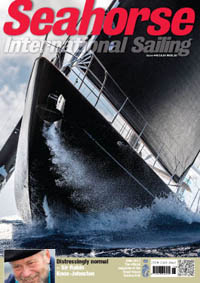 Seahorse build table - Practical... and a thing of beauty
Orion Shuttleworth reminds us of a famous name in multihulls with a new design which we'd definitely be clearing out the shed for

A shrine to sailing speed
Newport News, Virginia seems a fitting new home for a rather special 'yacht'

Sailor of the Month
A little light controversy with today's marmalade

To the wire at the Vice Admiral's Cup
The Vice Admiral's Cup concluded Sunday on the central Solent in lighter 10-13 knot winds, but this time blowing from the east. The leaderboard was so tight across the seven classes of one designs and level rating boats that in many, discards decided the outcome.

In the J/109s, the final day brought about a change of leader with Robert Stiles on Diamond Jem edging out David Richards' Jumping Jellyfish by a point, in turn one point ahead of Simon Perry's Jiraffe

Racing in the J/111 class also came down to the last race with Tony Mack's McFly managing to pull off the win to beat Martin Dent's World Champions on Jelvis by a point.

In the Quarter Tonners, Sam Laidlaw and his crew on Aguila hung on to claim the win, adding the Vice Admiral's Cup to an unbeaten run this season. This was despite the best endeavours of Louise Morton's all-female team on Bullit, which won both of today's races leaving them second, again by just a point.

In the Diam 24od trimaran class there was an unexpected winner in Italian Riccardo Pavoncelli's Gaetana 3 after being awarded redress for a collision on Friday. They won today's first race and the Vice Admiral's Cup overall by 1.5 points from Paul Wakelin's Fluid Boat Services, Buzz.

Marvel was not the only boat to score nothing but 2s and 1s at the Vice Admiral's Cup. So too did Ben Meakins and the crew of Polly in the Impala 28 class, rounding off the event with two more wins. -- James Boyd

The well-worn white hull of a standard Etchells 22 went into Bill Trafford's shed near Skenakilla Crossroads in March last year. And this week, the gorgeous dark blue cruising sloop Guapa (it's Spanish for beautiful) emerged.

On Wednesday she'll be arriving in Crosshaven for her mast to be stepped and new sails fitted from Des McWilliam. But the boat is so utterly transformed, with judiciously-raised topsides and an extremely elegant Scandinavian-style coachroof and comfortable accommodation within, that Bill naturally wondered if his calculations as to the new location of the waterline were accurate.

Indeed, like every boat-transformer, he wondered if she'd float. So rather than give her a totally-untested debut at Crosshaven, Guapa was quietly towed up the road to Doneraile... then up the road to Adare and down to Askeaton off the Shannon Estuary, where Cyril Ryan at his boatyard had the crane ready, and Guapa had her first splash in complete privacy. No leaks. And she floated perfectly on her marks. All being well, next Wednesday in Crosshaven, you're in for a treat.

In a recent Scuttlebutt Europe you say that there are 6 clubs who own Cowes Combined Clubs.

This is incorrect, Cowes Combined Clubs is made up of the Cowes Town Regatta Committee and the following clubs

An excellent opportunity to buy into an established charter Whitbread 60. strong and well looked after, with regular maintenance and recent rigging and engine.

New to the brokerage market, this Swan 60 has been optimized for competitive racing and is offered as a turn-key regatta program including sails, rigging, equipment and storage/shipping cradle. Contact our office in Monaco for additional information about pricing and location

The Last Word
The correct statement of individual rights is that everyone has the right to an opinion, but crucially, that opinion can be roundly ignored and even made fun of, particularly if it is demonstrably nonsense! -- Brian Cox