Colman Dismasted, Bellion Headed To Finish Line Without Mainsail
At 2300 French time Friday the 10th February, Conrad Colman called his team to inform them that IMOCA Foresight Natural Energy dismasted. The skipper is unharmed, and was calm during the call. He freed the rigging (mast and mainsail) and he managed to save the boom.

After a very uncomfortable night with the boat rolling wildly in the big swells, Conrad Colman (Foresight Natural Energy) was able to get on deck Saturday morning to assess the situation after being dismasted last night. Colman had no choice but to cut free the mainsail and the mast to avoid damaging the boat, but the head sails and the boom were saved but not without some damage to the boom.

The Bay of Biscay is not giving up Eric Bellion easily as the French skipper battles upwind with no mainsail, trying to get to the finish line of the Vendee Globe. Bellion on CommeUnSeulHomme has had four tempestuous days fighting a North Atlantic depression and this Sunday afternoon there is little sign of real relief for Bellion.

After losing a section of track near the top of his mast Bellion was forced to drop his mainsail. But a blocked and twisted halyard meant he had not yet been able to re-hoist it. He got to within ten miles of the Spanish coast after Cape Finisterre and, after a short tack out to the north, was making south east this afternoon at between five and six knots. He will still see 30-35kts of knots of wind but the breeze will veer to the SE, which should allow him to make more directly for Les Sables d'Olonne. He had a little over 250 miles to the finish line this Sunday afternoon.

Winds are due to ease for the stricken Conrad Colman and move into the south west and drop to 20-25kts which should allow the New Zealand skipper to start work on attempting to step a jury rig. He is in full energy saving mode, minimising all of his electrical power use unless essential. The forecast is much more favourable for Colman.

Arnaud Boissieres and Fabrice Amedeo look set to gain downwind conditions as they route towards the Portuguese coast. Boissieres was almost exactly 200 miles south of Conrad Colman's position this afternoon.

David Gilmour Still Leads, But Under Pressure
Photo by John Roberson. Click on image to enlarge.

Busselton, Western Australia: Though David Gilmour still leads the Geographe Bay Cup, he is no longer undefeated and is under pressure with three other skippers just one point behind him.  Fellow Western Australian Torvar Mirsky knocked Gilmour off his pedestal, and is one of the three skipper putting on the pressure.

It is all local skippers at the top of the leaderboard after day two of the regatta, with Matt Jerwood and Gilmour's younger brother Lachy also just one point off the lead.

The thrills and spills came thick and fast on Geographe Bay, with the wind still virile, in the 15 to 25 knot range during the day. First to take a swim was Robbie Gibbs, with his lack of experience taking its toll, but the spills were not confined to the lower end of the leaderboard. An embarrassed Torvar Mirsky managing to put his mast in the water in his match against Evan Walker.

Although Swedish skipper Mans Holmberg and Sydney's Evan Walker are two points off the lead, they have also sailed two fewer races than the Gilmour brothers and Mirsky, so are in a strong position to make up the deficit.

The race committee worked relentlessly to run 22 matches after a late start due to strong winds. Monday is the last day of the event. -- John Roberson

Seahorse March 2017
What's in the Latest Edition Of Seahorse Magazine 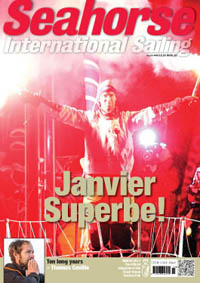 Design - Flying oldies
'Cabinet GSEA' in Brittany are to date the only engineers to have converted a 2012-generation Imoca 60 to foiling. Damien Doyotte

Sailor of the Month
Kindred spirits underneath

French Skipper Simon Bertheau won the opening event of the European Tour ahead of World # 20 Dejan Presen from Slovenia and the Russian Vladimir Liparvski. The multiple Olympian Christian Binder from Austria and the Croatian Pavle Kostov were tied for fourth place.

The Tour event in Sibenik, organized by the Wave Sailing Centre, challenged the ten teams with various conditions. Was it the famous bura wind with gusts up to 30 knots on the first day, so came light wind tactics into play on day number two. But on the final day, the bay of Sibenik provided a outstanding match racing venue with sunshine and sea breeze the whole day.

Simon Bertheau stunned the other skippers with outstanding performance over the three days. With just one race lost to the second placed Dejan Presen, it was a well-earned victory. The French took also the lead of the European Match Racing Tour which will continue in one month's time at Tivat in Montenegro. -- Helmut Czasny-Bonomo 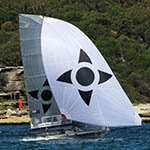 Sydney Harbour: It was a day of thrills and spills for the 18 Footers as they battled across Sydney Harbour in a 22-28knot Southerly today. The conditions tested even the best of sailors as they completed three windward/leewards for the President's Trophy.

Michael Coxon, Dave O'Connor and Trent Barnabas, Thurlow Fisher Lawyers won the race by over five minutes after a flawless performance; they were also one of only two teams not to capsize.

The battle for second came down to who could get across the finish line without capsizing. First it looked like it was going to be Jack Macartney's Coopers 62 Rag & Famish but a wipeout put them out of the running. John Winning's experience in the class proved to be the key to success as he safely cruised across the line on Yandoo to take second. Steve Quigley's Thekitchenmaker.com.au finished third, they were the second team not to capsize during the race.

Coopers 62 Rag & Famish managed to get to the finish line to take out fourth.

Next week we have another Club Championship race, the final race before the JJ Giltinan kicks off on February 24. -- Kimberley Wilmot

Normandy Channel Race - 20 Class40s Already Signed Up
From 11 to 21 May 2017, Caen, the English Channel, the Irish Sea and the Celtic Sea will once again form the backdrop for nearly 1,000 miles of close-contact racing, skirting the coasts of Normandy, England and Ireland.

20 crews of two skippers have already answered the call of this great classic of the Class40 circuit, which is the only offshore race to host a start and finish in the same harbour, in Caen.

The great wealth of sailing conditions encountered in the English Channel, the Solent, the Scilly Isles and the Fastnet attracts highly skilled offshore and inshore racers, all fascinated by the prospect of a series of fine confrontations that are as technical as they are tactical.

With British, German, Spanish as well as French winners in its last seven editions, the Normandy Channel Race makes a name for itself through its highly international line-up. A fact that is translating across to 2017 with entries from no fewer than 5 overseas boats, including that of Japanese sailor Hiroshi Kitada, who posted a dazzling performance last year during his initiatory transatlantic races from Plymouth to New York, and from Quebec to Saint Malo.

Two of the very latest generation craft are flying the French and the Norman flag in the form of Campagne de France, skippered by Halvard Mabire and Miranda Merron (No.147), and Cap des Palmes (No.148) skippered by Brieuc Maisonneuve/

The OCC Announces Award Recipients For 2016
Dartmouth, Devon, UK - Each year, the Ocean Cruising Club (OCC) recognises the outstanding achievements of blue water sailors and brings them to the attention of the sailing community.

The OCC Seamanship Award is presented to Gavin Reid, the skipper and the crew of Mission Performance during the 2015-2016 Clipper Round the World Race, for responding to a distress call, standing by under difficult conditions, and swimming to M3, climbing the mast and freeing a crew member who had been trapped at the top for 9 hours.

The Geoff Pack Memorial Trophy recognizes the person (member or non-member) who, by their writing in print or online, has done most to foster and encourage ocean cruising in yachts or other small craft. This year it is awarded to Sue Richards* and the Noonsite Team: Val, Jeremy and Noah.

Noonsite was started by Jimmy Cornell and acquired in 2007 by World Cruising Club.

Additional award recipients, to whom we offer our sincere congratulations, include:

Miami Star Winter Series - Levin Memorial
The wind had difficulty materializing this morning but we finally got one race going around 12:40 in 6 knots of wind from the southeast.

After yesterday's results, things were tight at the top and with the fickle conditions today, anything could have happened.

Danny and I had a decent start and shortly after tacked to port to head right, in the middle of the fleet.  The wind was fickle and dropping in strength as we neared the windward mark. We rounded about 7th with Augie Diaz in front of us. Augie blazed down the run as usual and rounded the gate with a big lead. At this point the regatta was his.

Racing in conditions like this is very challenging.  It is not hard to get a few things wrong and find yourself back in the pack.  We were very lucky as most everything we did this weekend turned to gold.

On the second windward leg, Augie and Arnie went to the right and Danny and I stayed a bit more to the left. This worked out for us and we passed Augie. Down the final run to the finish, Augie again super fast, passed us to finish third but our 4th was all we needed to win the regatta.  Gris Dolf and Luke Lawrence won the race with Larry Whipple and Austin Sperry in second.

I haven't had this much enjoyment from sailing in a while. I experienced this when I raced with both Danny and Allie to Hawaii, twice. That was 10 years ago.

Next for me is IRC racing with the Beau Geste team in Austrailia at the end of the month. -- Paul Cayard

‘Thor’ was launched in November 2014 and is ready for racing or cruising. Currently lying in Mexico, she is available for immediate delivery.

Vertical Smile is the third Swan 60 to be delivered and was launched in 2010. Currently lying in the Nautor's Swan Service Center in Scarlino, Italy. She is available to visit by appointment.