Crossing in Biscayne Bay and in the Atlantic waters in front of Miami there will be both newcomers and crews that already have a success story at their back in the Melges 24 fleet. Amongst these last, Carlo Fracassoli, winner of the 2012 Melges 24 Worlds as a helmsman of Italian team Gullisara, will be in Miami trying to replicate the result achieved on Lake Garda in Torbole, Italy - the event with the largest entry number (124) in the class' history.

Despite being now almost 23 years old, Melges 24 is a boat that keeps having success among the crews and Fracassoli expressed all his support to the technical features of the boat, that still is so contemporary: "It was so revolutionary when first introduced, with the shift from the spinnaker to the gennaker, that, I think, at first it wasn't perceived well in all its potentialities. Melges 24 is still, as far as today, a perfect mixture between a dinghy and a keel boat, with the crew being made by five people, with technical features that lack to other boats of similar dimension and an ease in being fitted out and moved that is not proper to many boats".

In Miami the crew of Fracassoli that used to sail in the past with a boat that was not perfect at all times, and often needed works of improvement, will get in to the water with a brand new boat - the latest one that has been built in Zenda's Melges 24 boatyard, and the expectations towards both the crew and the boat are high.

The waters of Miami will represent a challenging race course for Fracassoli's crew, composed by Italians that mostly grew up in lake waters

RS:X Youth World Windsurfing Championship
The International RS:X Olympic Windsurfing Class Association, a step ahead of all Olympic Sailing Classes with its first Major event after the successful 2016 RIO Olympics, now looking forward to a week of exciting racing, where the Youths - the next generation, our future Windsurfing Olympic sailors from around the World take on the challenge in waters of the Eastern Mediterranean on this scheduled World Championship event at the Limassol Nautical Club on the island of Cyprus. All is set and ready for the upcoming races from the 21st through the 25th of November.

The Opening Ceremony took place on the 19th of November at the Evagoras & Kathleen Lanitis Foundation - Carob Mill Limassol after a Flag parade with marching competitors trough the streets near the Limassol Marina. 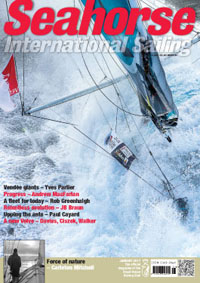 We've missed you
After a lapse of far too many seasons the One Ton Cup is back in play, now being competed for in the (fast) Fast40+ class. And both the class and its biggest event are thriving. Rob Greenhalgh 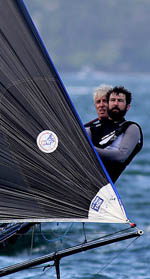 The 2016 JJ Giltinan champion Smeg team of Lee Knapton, Mike McKensey and Ricky Bridge proved they will again be the crew to beat this season with a brilliant 1m40s win over a strong fleet.

Smeg's win today has also set up a great finish to the championship next Sunday as Smeg and Coopers 62-Rag & Famish Hotel are equal points leaders on 5 points.

Race 5, the last race, of the NSW Championship will be sailed next Sunday. -- Frank Quealey Australian 18 Footers League

At a time where the winter gales start to relentlessly beat up the shores of the British Isles, and boat-owners are putting their vessels firmly to bed, Phil Sharp, sailing Class 40 race yacht Imerys is now on Code Red Standby to attempt one of the fastest of the World Record-breaking routes, the cross-Channel Sailing Record.

After establishing last December's Length of Britain Record with extreme adventurer Sean Conway, PS Racing have their sights set on the Channel Record route, one of the most established routes in offshore sailing. Launched in 1905 by King Edward VII, the 'Cowes-Dinard' has since taken place as an annual race and is ratified by the World Sailing Speed Record Council as the Official Cross-Channel route for Sailing Speed Records.

A total distance of 140 miles, Phil will be attempting to break the outright monohull record of 12 hours 1 minute and 31 seconds. This is currently held by offshore skipper Jean Luc Van Den Heede (VDH), who set the record back in 2004 in Adrien, a boat over twice the size of Imerys, with a length of 85 feet.

Phil will be delivering Imerys to Cowes this weekend where final preparations will be made ahead of a potential record attempt over the coming weeks.

Led by Charles Darbyshire, Fourth Cape has taken over the Academy from OC Sport, under whose management it was sponsored by Artemis Investment Management, a partnership that has now ended.

Darbyshire has been the director of the Academy since inception in 2010 and he is now relishing the chance to run it on his own. As before, The Offshore Academy will look to train the brightest and best of Britain's young aspiring solo offshore ocean sailors with the aim of preparing them to compete in the great solo races.

"I'm excited to be launching Fourth Cape, after 14 prolific years at OC Sport, where I've experienced some incredible projects within the fully crewed, short-handed and solo ocean racing world. This new structure ensures we keep the continuity, and momentum that we've built over the last six years," said Darbyshire.

The Academy will support talented young sailors and train them in the skills of short-handed offshore racing. These include boat management, racing tactics, meteorology, sleep management, nutrition, and fitness plus media and sponsor liaison and all the other elements that go together to create world class sailors capable of winning solo trans-ocean and round-the-world races.

The Offshore Academy's goals for 2017 include helping British sailors prepare for and enter the 48th edition of the Solitaire Urgo Le Figaro, regarded as the unofficial world championship of solo ocean racing.

Will Boulden And Alpha Racing Team Wins Harken International Youth Match Racing Championships
Will Boulden and his Alpha Racing Team from Royal Freshwater Bay Yacht Club in Perth have taken out the 2016 Harken International Youth Match Racing Championships after four days of racing at the Royal Prince Alfred Yacht Club! The team of Mark Wong, Alex Negri and James Farquharson faced off against local sailor Malcolm Parker and his team from the RPAYC in some of the closest match racing that we have seen at the Harken!

Boulden thanked the Royal Freshwater Bay Yacht Club and Harken for putting on the event. He is ranked 46th in the ISAF Open Rankings and is just 20 years of age, making him one of Australia's rising youth match racers to watch in the future.

Third placed skipper was the RPAYC's Sarah Parker and her all female team who were up against the Royal New Zealand Yacht Squadron's Matthew Hughes. Racing went to three flights with a score of 2 to 1 in favour of the girls.

The 2016 standings are as follows:

Star Sailors League
The Star Sailors League (SSL) was established in January 2013, the organisation allocates points from Star Class Regatta all over the world to define an annual SSL World Rankings for well over 2000 sailors. In December each year, the cream of the crop gather in Nassau Bahamas. Only the top 12 teams make the SSL Finals and they are joined by VIPs from other sailing classes, to decide the winner of the title and take a lion's share of the $200,000 Prize Purse. This year will be the fourth edition of the SSL Finals and every year there has been a different winner.

in just 10 days the 4th edition of the SSL Finals will feature more team than ever before, 25 teams from 17 different countries will compete. The list of competitors is astounding. Among them are three of the six most medalled sailors of all time; a total of 16 Olympic medallists with six Olympic champions, two America's Cup winners, two Volvo Ocean Race Winners, two Louis Vuitton Cup winners and one match race world champion. The complete Rio 2016 Laser Men's podium will race together along with four other medallists from Rio.

From November 29th to December 4th, the regatta will be streamed live and free on finals.starsailors.com

A complete live video stream of the races as well as additional insights provided by the state-of-the-art tracking system developed by Virtual Eye, will allow people from over the world to follow their favourites and cheer for them. Many prestigious sailing websites around the globe will also share our live broadcast on their homepage. Armchair sailors can also race the course with Virtual Regatta. 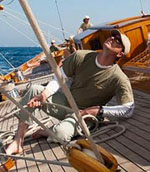 Irish sailing has lost one of its best friends and greatest mentors with the passing at the weekend of Theo Rye. Maritime historian, technical expert, yacht designer and repository of much arcane lore in all areas of old and classic boats and their rigs, Theo was generous with his time, enthusiasm and expertise, however large or small, or significant or obscure, the project might be.

He was very easy to get along with, one of those people with whom you might resume a conversation as though you'd been with him only the previous day, yet a year and more might actually have elapsed. As for the range of his interests and expertise, it is simply summed up by saying that he was the key adviser in the recent total restoration in Southampton of the magnificent 135ft Fife 23 Metre Cambria, and at the same time he put equal commitment into designing the special CityOne training dinghies for his close friend Gary MacMahon of the Ilen Boatbuilding School in Limerick.

Among the craft in Ireland with whose restoration he was directly involved are Hal Sisk's G L Watson-designed Peggy Bawn of 1894, Darryl Hughes 1937 Tyrrell ketch Maybird, and the Conor O'Brien ketch Ilen of 1927 in West Cork. Most recently, he has been consultant to the project to re-build the Dublin Bay 21 Naneen (1903) for Hal Sisk being undertaken by Steve Morris in Kilrush. And in his capacity as Technical Editor of the magazine Classic Boat, his latest contribution, in the current December 2016 edition, is a discussion of Conor O'Brien's world-girdling 42ft ketch Saoirse, built in Baltimore in 1922, with Theo Rye's thoughts being based on plans from Gary MacMahon's archives, the lines having been taken directly off Saoirse's hull by Uffa Fox in Cowes in 1927.

those fortunate enough to have known him, however slightly, have lost a wise friend who greatly improved every project with which he became involved. Thus many people were very directly affected and touched by the news in June of this year that he had been diagnosed with an inoperable brain cancer tumour, and his passing at the tragically early age of 47 leaves a deep void. Our heartfelt condolences go to Sarah and the family. -- WM Nixon

Following typical Mark Mills lines, Crazy Horse is raring to get back out on the race track. Big overhaul last year and now looking good as new.

From the drawing board of John Corby, the technology of a cedar strip/carbon fibre composite hull.

The Last Word
Money won't create success, the freedom to make it will. -- Nelson Mandela