M32 Battle Of Helsinki
The M32 Battle of Helsinki was opened in perfect conditions on Thursday. Hernesaaren Ranta treated the sailors with a fresh southwesterly peaking 20+ knots in gusts. Sunny conditions made it truly enjoyable for the audience who could almost touch the boats crossing the finish line. Hernesaaren Ranta truly proved to be one of the top venues in Europe for stadium sailing.

The favourites and series leaders on board GAC Pindar skippered by Ian Williams dominated Thursday's racing. The British team started their M32 career in Helsinki a year ago, but the experienced crew has already reached the top of this professional class. The other four teams were beaten six times out of seven by GAC Pindar, and at the end of the day Flux Team, lead by Johnie Berntsson took second place.

The newcomers in the series, Artemis Youth Racing, stepped up their pace in every race. Skipper Rasmus Rosengren and his young crew managed to avoid the fifth position twice during the day. Their debut took place in demanding conditions and in somewhat lighter breeze on Friday and Saturday, they will be hungry for more success.

M32 racing continues at Hernesaaren Ranta on Friday and Saturday. Boats will leave the dock soon after 1pm and first race is scheduled for 2pm.

The latest stage of the global tour picked up where it had left off in Hamburg, Germany, just a month ago as seven crews made up of the world's best sailors resumed battle in the heart of Russia's second largest city.

It is the third time St Petersburg has hosted the Extreme Sailing Series following its debut on the circuit in 2014.

But the city had not enjoyed the spectacle of race boats 'flying' more than a metre above the water on special hydro-foils - until now.

The cutting-edge GC32 catamarans were in their element as winds between nine and 12 knots combined with the flat waters of the Neva River to provide perfect conditions for lightning-quick racing.

Racing resumes at 1400 local time tomorrow with a forecast for similar conditions.

Seahorse October 2016
What's in the Latest Edition Of Seahorse Magazine 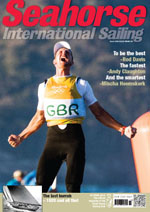 Experience, resources, delivery
With immaculately-finished M32s rolling regularly out of the door Aston Harald are ready for some much larger challenges

World news
(Another) win for France, development is not always swift, round and round in Auckland, the shoreside challenge of the Cup and the welcome return of the Wizard of Santa Cruz. Bernard Nivelt, Ivor Wilkins, Blue Robinson, Patrice Carpentier, Dobbs Davis

Rod Davis
With Olympian timing... this gold (and silver) medallist strongly believes that put simply the best should never be enough

Battle Of The Classes
The 2016 Battle of the Classes Pursuit Race will feature at the Southampton Boat Show on 25th September 2016.

Each dinghy class will be represented by just two boats, so the standard will be high, with each class competing to be the best. Previous years have seen many National and World Champions representing their respective classes.

Competitors will launch from the nearby Southampton Water Activities Centre and will be competing on a tight course laid just off the Boat Show marina. With several spectator opportunities along the shore and regular updates via the Southampton Boat Show public address system, SailRacer will also be providing live GPS tracking, analysis and commentary, which will be available online (including Mobile) and on big screens around the Show Ground.

Hosted by Royal Southampton Yacht Club, the 2016 Battle of the Classes will be a great showcase of diversity of UK dinghy sailing.

LaserPerformance Collegiate Cup
From August 23rd through August 27th LaserPerformance held their second annual Collegiate Cup Clinic and Regatta. The event was hosted by Circolo Vela Torbole in Torbole, Italy. Teams from Austria, Australia, France, Italy, Ireland, Netherlands and the United States participated in the five-day event at one of the most beautiful sailing venues in the world.

The first two days of the event provided the sailors with a team racing clinic coached by American team racing star and coach, Karl Zeigler, and his assistant, Olivia Crane.

Following two days of the clinic, team racing for the championship began on Thursday. Torbole is well known for its favorable wind conditions. Almost every day the breeze comes in at around noon and builds to about 15kts. Racing commenced at 13:00hrs, and the wind was exactly as predicted. The professional race committee, headed by Carmelo Paroli, planned and completed one full round robin of 28 races.

The Netherlands won the Zachary Leonard Trophy for the LaserPerformance Collegiate Cup with a 16-4 record, followed by the USA Women with a 14-6 record. Italy was third with a 13-7 record, and Austria rounded out the Gold Fleet with a record of 11-9.

Ireland 1 won the Silver Fleet with a 9-8 record followed by Australia with a 7-10 record. Third was Ireland 2 followed by Team France.

A Slowdown Ahead For Big Boats?
Nigel Ingram, who just delivered the new 130-foot yacht My Song to a client last month, is acutely aware that the entire industry is dependent on the disposable income of wealthy owners.

"The last three years things have started to slow down," he said. "Most boat builders are really hungry for new projects. The industry has to be feeling it because the architects aren't busy and that's where it starts."

Still, the Maxi Yacht Rolex Cup is seeing record numbers, sailmakers are reporting a boom in the commissioning of racing and cruising sails, and MCM has four new construction projects.

Like many of his contemporaries in the superyacht industry, Ingram is nonetheless measured when evaluating the business climate. After all, he is reminded that it wasn't that long ago that yacht captains lived out of duffel bags and ran the whole boat themselves.

"It's hard to predict industry direction," he said. "It's out of our control. There is a real boom in small-boat performance sailing. I hope to goodness that as these people get older they stay in yachting. It's a big industry and it needs to continue." - Chris Museler in the New York Times

The Hamble-based Club, which is organising the Championships in conjunction with the J/80 UK Class Association, published the Notice of Race today. This is available for download, along with other related information, on the event website.

Around 50 entries are expected with more than 30 expressions of interest received so far. The Championships are open to the Members of the J/80 Class as defined by the J/80 Class Rule (C3.3).

Entries will only be accepted via the event website: www.j80worlds2017.com and the closing time and date for entries is 23:59 on Friday 12th May 2017.

The Sailing Instructions will be published on the event website before Monday 3rd July 2017.

Industry News
The Belgian watchmaker, Ice-Watch will be the official timekeeper for the 2016-2017 edition of the Vendee Globe, which will start at precisely 1302hrs (local time) on Sunday 6th November from Les Sables d'Olonne. To celebrate this partnership, Ice-Watch has designed a new collection of Vendee Globe-branded watches.

This partnership with the prestigious solo round the world race is the latest in a series for the brand in the world of top class sports. In association with the French swimmer, Florent Manaudou since 2012, Ice Watch is also present in mechanical sports. Its fourth year of working alongside BMW in the DTM championship with Tom Blomqvist driving the Ice-Watch BMW M4, consolidates its choices in terms of promotion and involvement.

Ronstan has just announced the appointment of a new CEO and Commercial Manager-Marine for their North American operation. These changes are part of a worldwide reorganization led by the recent retirement of longtime CEO, Alistair Murray, and subsequent promotion of Scot West from the North American President to Managing Director of Ronstan International.

New North American CEO, Brendon Anderson, will assume the leadership role of Ronstan's business in the US and Canada. Brendon comes from a construction background and over the years has worked with Ronstan's Architectural division in Australia. His extensive project and business management experience provides the strong foundation and insight needed to guide the widely varying aspects of Ronstan's USA operations.

To help Brendon maintain and expand Ronstan's core marine business in North America, longtime Ronstan employee, Alan Prussia, will now assume the role of Commercial Manager-Marine. Alan has spent his lifetime working in the sailing industry and has serviced Ronstan's retail marine accounts on the West Coast for more than 21 years.

The Sailing World Cup Final is proud to announce the exclusive Art Series Hotel Group as the official Hotel Partner of the event. Art Series Hotels and Residences are located in the hottest art and cultural hubs within Melbourne, Bendigo, Adelaide and Brisbane. These boutique properties are all inspired by and dedicated to iconic Australian contemporary artists.

Current Olympians and sailors from around the country and the world will head to the Sailing World Cup Final to conclude the yearlong series held from the 4 - 11 December, 2016. This will be the first time the Final will be held in the Southern Hemisphere.

Racing, along with the regatta village and event entertainment, will be staged in St Kilda for the public's enjoyment. Sailors will have the opportunity to compete alongside their sailing heroes while spectators can enjoy the festival-like atmosphere while mingling with current Olympians.

The J/70 Class Association has announced the support of a number of sponsors for their National Championships, taking place 2nd- 4th September from the Royal Western Yacht Club, Plymouth.

Chris Davison from Ullman Sails said 'Ullman Sails is extremely proud to be the title sponsor of the 2016 J/70 UK National Championships. Ullman are also sponsoring the 2016 World Championships in San Francisco.

Additional sponsors, Sol and Sagres, will be helping the dockside entertainment get off to a lively start. Fitting, being that our current World Champions are a Mexican team! Competitors can look forward to a Sol dock party after racing on Friday and a Sagres pre-party before the class meal on Saturday.

The J/70 class are also extremely grateful for sponsorship from Grapefruit Graphics, Allspars, Force4, Thistle Park Tavern, Spinnaker Wealth Management, and Carbon Yachting, who will be at the event to promote their dedicated J/70 page, offering parts and services, as well as a repair service

One month from the first entry discount deadline (after October 1 the entry fees increase between $3 and $5 per foot), the list of teams competing at the 30th Quantum Key West Race Week includes 44 boats. Top classes signed up to compete include the C&C 30 One-Designs, J/111's, Melges 24's and J/70's. Also slated to compete is the TP52 Class, which will kick off its 2017 52 SuperSeries in Key West.

The Infiniti 53, a new 53 foot canting keelboat suited for exceptional performance both offshore and inshore. The new yacht will feature a canting keel, gybing centerline daggerboard and leverages the dramatic performance advantages available through the DSS system. The design intends to revolutionize the performance of yachts in the mid-50 foot range. It will be the first Farr-designed boat featuring DSS foils.

The Last Word
It's easier to fool people than to convince them they have been fooled. -- Mark Twain