After all the thrills of the previous day, perhaps it was inevitable the Olympic Sailing Competition would be a bit of a comedown today in Rio de Janeiro.

Unfortunately, the wind failed to materialise and the 470 Men and Women will have to hold off another 24 hours for the gold, silver and bronze deciding Medal Races.

There were a few 470 Women's teams out on the water readying themselves for a medal battle, including Ai Kondo/Miho Yoshioka (JPN). "We have strong emotions coming from inside and we want a medal today," said Kondo. "We are aware that the points are narrow but all we can do is our best and hope we have a fantastic race."

Hannah Mills/Saskia Clark (GBR) on the other hand could relax and enjoy the sunbathing on Guanabara Bay in their gold-medal-winning boat. "It was a really quiet night and we just went for dinner with our boyfriends and our physio," said Mills. "We crawled into bed around 10pm as we were absolutely exhausted. I actually then stayed awake for another three hours as I was wired yet knackered and my eyes were burning but I couldn't sleep."

The 470 Men finalists never made it to the water, and they will also have to wait until Thursday when the forecast looks better.

49erFX Medal Race Marks Historic Moment For Skiff Sailing
On the eve of the first ever 49erFX medal race, what this progression has delivered is obvious. The gender equal event now features the best men and women skiff sailors on the planet, and it is the women delivering the drama. 4 teams are all tied heading into the final race, where all the medals will be decided head to head. It is sure to be a compelling 20 minutes of racing!

It has been a long journey. The Class has always had ambitions to include women. Under the 8-year leadership of now Honorary President Malav Shroff and the current President Marcus Spillane, the Class has delivered on multiple fronts: true gender equity, event broadcasts showcasing the sport, a professional management structure, and increasing sponsor and fan engagement.

Rocking The Podium
Our sport doesn't have that many celebratory moment. Sure, we have major championships, and the victors congratulated by their peers, but their feats lost on the general public. But not the Olympics.

Competing in the Games is an achievement understood by anyone. And then winning a medal, well, that is a rock star moment.

The Medal Race at the Rio Olympic is that crescendo moment. Flamengo Beach is full of ticket buying spectators. Family, friends, and sports fans line the water to be close. PA systems and monitors share the story. Cold beverages shape the mood. The double-points, non-discard race impacts the standings. It is that pressure situation that challenges the competitor.

After the finish, the medal winners greet their coach boat for congratulations and country flag. The photographers know the score, and are positioned to capture the emotional moment. The sailors are required to sail toward a buoy near the beach so as to pass the crowd. They'd probably do it anyway. This is Rio, where a festive atmosphere is their greatest commodity.

The Medal Ceremony is a revered event ... celebrations like this come rarely for a sailor. It is a worthy award for a lifetime of work.

M32 Scandinavian Series
Aarhus, Denmark: When the third leg of the M32 Scandinavian Series sets sail tomorrow in Aarhus, the second-largest city of Denmark - history will be written. For the first time the city has opened up the inner waters of it's industrial harbor, allowing racing to take place just inches off the city center.

Five teams are lining up to compete for the top spot over the three-day event, including contender for the overall first place of the Series, six-time Match Racing World Champion, Ian Williams on GAC Pindar. Third runner-up, Nicklas Dackhammer on Essiq Racing Team will also be on the start line. It will be close sailing in the small harbor basin with races commencing daily at 2PM, local time.

All eyes are on local heroes, skipper Jes Gram Hansen and tactician Rasmus Kostner on Danish boat, Team Trifork. The last time the team competed in the M32-katamaran was at the first event of the Series in Copenhagen, where they claimed a second place

Thursday's weather forecast predicts a Northeasterly breeze of 10-15 knots, followed by two days of lighter, more shifty breeze. To accommodate fair racing in the enclosed harbor basin the course will likely be changed from race to race with a set finish line and varying starting legs.

Racing runs from Thursday 18th of August until Saturday 20th of August, with racing from 2PM - 5PM daily. For news and live commentary go to m32series.com

Seahorse September 2016
What's in the Latest Edition Of Seahorse Magazine 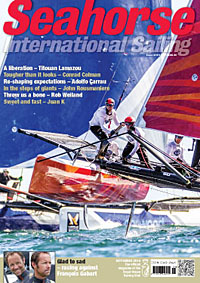 Paul Cayard
Stop the carping and get out your checkbook

Slingsby Back At Helm For Oracle
Tom Slingsby is expected to resume training with his Oracle Team USA team-mates this month.

The Oracle sailing team manager, helmsman and tactician is on the mend after having surgery to replace a damaged disc in his back at the DISC Sports & Spine Centre in Marina del Rey, California, the same clinic where Jimmy Spithill, the Oracle skipper, recently had elbow surgery.

The Australian won the gold medal in the single-handed Laser at the 2012 Olympic regatta in England and opted not to defend his title in Rio as Oracle ramp up their preparations for the defence of the 'Auld Mug' next summer in the Great Sound.

"The good thing about the timing for the operation is that I've been able to watch a lot of the Olympic Games over the past week or so as I go through the early recovery process," said Slingsby, a five-times Laser world champion and 2010 ISAF World Sailor of the Year.

Slingsby and fellow Aussie Spithill expect to be fit enough to compete at the next month's Louis Vuitton America's Cup World Series regatta in Toulon as Oracle resume their quest for a maiden regatta victory in the fleet racing event featuring the foiling AC45F catamaran. -- Colin Thompson

Golden Oldies Shine in RORC's 400-Mile Race Round Ouessant
Take a classic GRP production-built offshore racer, well matured in years but still in basically good shape, and give her lots of TLC. Add a good wardrobe of new sails and other discretionary go-fast equipment. Then race her regularly with determination and skill, and every so often you'll find you have a boat which, thanks to a sensibly low rating, can embarrass the new machines when conditions suit, writes W M Nixon.

In the current and rather intriguing 400-mile RORC Cowes-Wolf Rock-Ouessant-St Malo Race, which started on Sunday 14 August, the manageable sailing, and the regular slowbacks by adverse tide, have seen the low-rated oldies moving up the rankings.

The current overall leader on IRC is Jonathan Rolls Swan 38 Xara, which dates from the early 1970s. But quite how long Xara will remain in that overall lead is doubtful, as she's currently struggling to round Ouessant while making just 1.7 knots over the ground. And second overall is Eric de Turckheim's all-conquering A13 Teasing Machine, which is just 68 miles from the finish, and on course at 7.0 knots.

Preserving Australia's Rich Maritime Heritage
The Australian National Maritime Museum, on behalf of the Australian Government, is pleased to announce that it has awarded over $125,000 to support projects to promote Australia's maritime heritage. The successful recipients of the Maritime Museums of Australia Project Support Scheme will help, collect, conserve and display objects of historical significance.

Funding will support museums and historical societies to share their stories by embracing new technology including apps to share the history of the famous Cape Byron Lighthouse (NSW), shipwrecks of Rottnest Island (WA) and the Duyfken replica as it voyages to commemorate 400th anniversary Dirk Hartog's encounter with Australia (WA).

The scheme which offers funding to non-profit museums, historical societies and organisations is supported by the Australian Government and is administered by the Australian National Maritime Museum. The next round of funding will be open for applications in February 2017.

Super-Maxi Wild Oats Xi Club Marine Brisbane Keppel Race
Sail-maker Turns Reporter....Michael Coxon CEO of North sails Sydney is reporter-at-large on-board Super Maxi Wild Oats XI in the recent RQYS Club Marine Brisbane to Keppel tropical Yacht Race which started from Moreton Bay and went north outside Fraser Island. It started in a howling southerly and Wils Oats broke the record with a stunning kite ride in 16 hours, 56 minutes and 30 seconds. It was a case of Lunch and Dinner at sea and Breakfast in the Club.

Cocko captured, in his own inimitable style the atmosphere on-board during this 23 knot run.

Sir Robin Knox-Johnston & Suhaili Will Compete In The Hamble Classics Regatta
Sir Robin Knox-Johnston, an Honorary member of the Royal Southern Yacht Club, and his famous round-the-world yacht, the Bermudan Ketch Suhaili, are the latest confirmed entrants amongst the 45 Classic Yachts already set to compete in the first dedicated classic yacht regatta in the River Hamble, the Hamble Classics.

The Regatta is being hosted and run by the Royal Southern Yacht Club on 24-25th September. Club members with classic motor boats have also been invited to attend.

The Notice of Race including eligibility rules, current entry list, and online entry

During the Hamble Classics Regatta weekend there are opportunities to race aboard the Cirdan Sailing Trust's 70 foot vintage gaff-rigged yawl, the 1912 Duet, or you can enjoy a day's fishing trip aboard the Wetwheels Hamble powerboat (on a separate date to suit the successful bidder).

To bid for one or more of seven available crewing places to sail aboard Duet (with skipper Alex Carpenter and mate Paul Collins) please deliver a bid in a sealed envelope together with your name, address and telephone number to the Royal Southern Sailing Office by September 1st 2016. The minimum bid per place is £100 for two days sailing and the highest bids will secure the places. The bidding rules are available at the Sailing Office and please note that young people under 16 must be accompanied by an adult.

For those who prefer a day's fishing you are are invited to bid for groups of 6-8 people aboard the WetWheels Hamble Cheetah Powerboat from £1000 (inc. VAT), on a date to be mutually agreed (after the Hamble Classics Regatta weekend). The highest bid will secure the trip.

Please deliver your bid in a sealed envelope together with your name, address and telephone number to the Royal Southern Sailing Office by September 1st 2016. Again, the bidding rules are available at the Sailing Office.

The Infiniti 53, a new 53 foot canting keelboat suited for exceptional performance both offshore and inshore. The new yacht will feature a canting keel, gybing centerline daggerboard and leverages the dramatic performance advantages available through the DSS system. The design intends to revolutionize the performance of yachts in the mid-50 foot range. It will be the first Farr-designed boat featuring DSS foils.

The Last Word
You want weapons? We're in a library! Books! The best weapons in the world! -- The Doctor