Editor: Yes, I missed the Thursday issue. An immense swarm of bees took umbrage with my weed whacker... and with me. Enough venom to send me to the emergency room: I retalilated hours later with chemicals and flame. Not exactly a surgical strike but an effective one. Love the bees, love the pollen, hate the venom.

Tight At The Top
Photo by Max Ranchi, www.maxranchi.com. Click on image for photo gallery. 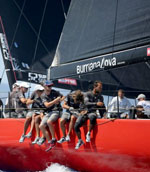 At the top of the rankings of the most competitive classes of the 35 Copa del Rey MAPFRE regatta it is either tight or very tight. After seven races there is now only one point between the US maxi duo, Hap Fauth's "Bella Mente" and George Sakellaris' "Proteus". The top pair of Maxi 72s stepped clear of "Momo" and "Caol Ila R" today in the Montblanc Maxi 72 fleet. The "Bella Mente" team are rueing a spinnaker drop mistake in Race 7, the second heat today, which probably cost them their second back to back win.

It is close in the highly competitive Swan 45 fleet too. After a second and first for Germany's Christian Plump's "Elena Nova" today the team which won Gaastra Palma Vela lie third but with four races to go there is just 1.5pts between the top three boats, and half a point between leader "Earlybird" and "Esthec".

And with a well executed win on the 22 nautical miles coastal race course today Ed Leask's British flagged "Magical Mystery Tour", the Club Swan 42, seized the overall leadership of BMW ORC 1, the regatta's biggest class with 38 boats racing. They now have one point in hand over the local Puerto Portals based DK46 "Maserati" which had lead since the start of the regatta.

Race wins were shared over the two races in the Singular Kitchen IRC 1 but "Azzurra" have a 4.5pts lead over the steadily consistent French crew on "Paprec", which are still on course for their best ever Copa del Rey finish. "Azzurra" won the first race and Alegre the second. The points will close up tomorrow when the eighth race brings in the discard

BMW ORC 2 sees Pedro Campos' "Movistar" even further ahead after winning their coastal race today. They are nine points ahead. In the Herbalife J80s "Marbella Team" are also nine points ahead but their lead is small compared to the Air Europe X-35's where Javier Sanz "Red Electrica de Espana" leads by 11pts.

Persistently consistent is the mode of attack adopted by Pierre Casiraghi and his team on Malizia in Act 3 of the GC32 Racing Tour, which runs until Saturday in Palma de Mallorca. It's also the first time this fleet of fully foiling catamarans have been putting on a show at the Copa del Rey, alongside 1,500 sailors competing in the other seven categories.

After an excellent 2nd place today in strong conditions with big swell, Malizia hangs on to her 3rd place in the provisional overall ranking out of 10 boats competing. Yesterday, they clinched another 2nd and two 3rd places. Their consistency over two days has enabled the Monegasque team, with Pierre Casiraghi at the helm supported by Boris Herrmann, Richard Mason, Adam Piggott and the Dane Rasmus Køstner, a new recruit for this stage, to stick close to the leaders, led by Frenchman Franck Cammas on Norauto.

"Conditions were particularly difficult today with over 17 knots. We fought hard for that second place and above all managed to hold our nerve to the finish line," says Pierre Casiraghi, who also now tops the provisional ranking in the owner-driver category. "Communication on the boat is really good, our actions are more and more fluid and I think we're feeling the improvement with every race. We just have to stay concentrated, as there's still two days to go against some highly experienced teams!"

Like the New York Yacht Club Invitational Cup the Gertrude Cup is an invitational event open to international teams who are each provided with a fully sorted and race prepared Etchells, each boat having matched sails to make the fleet as one-design and standard as possible. Now in its third year the Gertrude Cup is established as a key event in the Solent one-design scene.

The last day began in a building 9 to 10 knot SW breeze with the front runners in the fleet sharing the top five positions in the morning race. A win for Tom Carruthers (San Diego), second place for Chris Hampton (Melbourne) and third place for Jan Muysken (Abu Dhabi) meant that there was literally nothing in it overall, with a multiple teams tied or within a point of the lead at the top with one race to go.

Tim Grattan and his youth crew were hounded up the last beat of the last race but they were never headed and they took the last race and the Gertrude Cup. In another piece of symmetry the Royal Thames Yacht Club whose team won last years New York Yacht Club Invitational Cup now have another major international invitation trophy to sit in their trophy cabinet at the same time.

A great win by Tim Grattan and his young team of Emily Wiltshire, Jack Davies, Lilly Carlisle (average age 22 years) and and a tribute to the RTYC Youth program and to David Franks and Ted Fort OBE who established the Etchells fleet youth program in the first place and are both members of the Royal Thames and supporters of the Academy.

The Etchells Worlds is in Cowes this year, starting on August 31: 2016.etchellsworlds.org

The MOD70 trimaran owned by the renowned US sailor Lloyd Thornburg returns to Ireland six weeks after being pipped to the post by 58 seconds by Musandam Oman-Sail, who set the new Round Ireland speed record during the Volvo Round Ireland Yacht Race.

Lloyd and his crew including Ireland's Damian Foxall are back to claim glory and plan to beat the 38 hour, 37 minute and 7 second record by at least two hours.

They need to finish before 5.30am Friday on the line between Dun Laoghaire South Pier and Kish Lighthouse to break the record.

The final day of racing delivered two windward leeward races in a southwesterly gradient breeze. Once again, enhanced by thermal breeze the wind speed piped up to 20 knots, giving thrilling conditions to the fleet. In the pre-start to the penultimate race, Skeleton Key engaged JElvis, with the two combatants weaving through the fleet. However, Skeleton Key misjudged the line and arriving early had to bare away. It was a position that the American team found hard to recover from, ending the race in 10th, which was discarded. Race 8 was won by Mike Mayer's Kashmir. The team from Chicago became the fifth team to score a bullet at the J/111 Garmin World Championship. The intensity of the competition saw nine teams out of fourteen make the podium.

JElvis had a five point cushion going into the last race but a poor first beat left JElvis in 7th whilst Skeleton Key took the lead. However McFly and Kashmir, who were both in front of JElvis, almost simultaneously ripped their spinnakers, allowing JElvis to climb the necessary places on the leaderboard to win the J/111 Garmin World Championship.

World Sailing Receives Confirmation Regarding Six Athletes From Russia
World Sailing received confirmation this morning from the International Olympic Committee (IOC) that six sailing athletes from Russia have been declared eligible to compete in the Rio 2016 Olympic Games:

World Sailing awaits a final decision on the eligibility of a seventh sailing athlete from Russia - Pavel Sozykin (470 Men). Yesterday, the World Sailing Board of Directors determined Mr. Sozykin should be nominated for participation in Rio 2016, based upon new guidance provided by the IOC in determining athlete eligibility.

Southern Wind has announced the delivery of Crossbow, the fifth unit in its SW102 mini series. The 31.4m sailing yacht is the third hull to be built with a raised saloon.

Notable features of Crossbow that will make this vessel an ideal cruising yacht, the shipyard says, include a spacious flush deck, a tender garage for a 4.2m dinghy and a mainsail captive winch.

Crossbow follows on form her sistership Seawave, the 102ft sailing yacht that took the first place at the Rolex Capri International Regatta and third place at the Loro Piana Superyacht Regatta in Porto Cervo.

The Long Cruise range is a new development from Grand Soleil, the 46 is the first model and has sold over 30 boats in 18 months. She is designed for those who wish to discover the most beautiful seas in the utmost space and comfort, with systems optimised for ease of use by a single or double handed crew, yet with comfortable living space for 6-8. With long-range cruising in mind; the living spaces feature copious cupboards, lockers and tanks for storage and equipment. The overall concept is coordinated by Nauta Design, for a maximum expression of "Made in Italy" style.

Cantiere Del Pardo's 40 years of experience in building fast cruising and racing yachts mean that the 46LC is like all Grand Soleils; a real sailboat, a cruiser with performance, providing a wonderful helming experience that will be enjoyed by all.

Missy has been two years in build - the hull constructed by Green Marine (Vitters' composite subsidiary in Southampton, UK) with outfitting by Vitters Shipyard - was transported from Vitters to the facility at Harlingen where she will be commissioned, in preparation for sea trials next week.

Engineered by Pure Composite in New Zealand, and designed for a client with performance cruising in mind, she has a slim 7.5m beam, a generous sail plan and a lifting keel.

Construction was with foam cored pre-preg, in a female mould. The carbon fibre laminate reduces her internal structure and increases interior volume. Above deck, the carbon-fibre mast is from Southern Spars (with ECsix carbon rigging), and she carries a sail wardrobe from North Sails.

The 55m ketch Adele, launched by Vitters in 2005, is the first yacht to enter the extended refit hall last winter-season since Huisfit increase its capacity and that of the neighbouring climate-controlled paint hall.

The sailing superyacht underwent a complete mechanical upgrade (as well as replacing the PLC system), which necessitated removing the entire engine room.

In addition to Adèle, Huisfit recently completed a refit programme on Samurai (ex Mari-Cha -IV). She was delivered a few months ago after a radical transformation from stripped-down racing machine into a high performance luxury superyacht - "the biggest composite conversion of its kind ever undertaken", Huisfit claims.

For The Record
The WSSR Council announces the establishment of a new World Record:

All items needed to race and meet class requirements!

The boat will come as last raced, fully set up and ready to go race, rig tune numbers and notes along with targets and settings - all included!

The Last Word
I could see that, if not actually disgruntled, he was far from being gruntled. -- P. G. Wodehouse