Big Tuesday
Full on conditions made for some exciting racing on the second day of the J/111 Garmin World Championship. Gusts of wind topping out at close to 30 knots, and a building sea state, created highly challenging conditions. The Eastern Solent was frothing up all morning and by race-time a full on foam up created thrilling downwind action for the world championship fleet. There were broaches a plenty as the teams pushed themselves to the limits.

The Race Committee fired off two windward leeward races in survival conditions. Without question the best J/111 of the day was Paul van Driel's Dutch team racing Sweeny, who won both of today's races, and were enjoying a pint of Dutch beer in the Pier View in Cowes.

Prior to the start, over night leader, Martin Dent's JElvis, blew out a spinnaker and having consulted the Jury returned to shore for a replacement, missing the first race. Paul Griffith's Jagerbomb suffered a similar breakage during the first race of the day, which put them out for both races. Peter Wagner's team from San Francisco, racing Skeleton Key, put in a consistent performance to lead the world championship. Tony Mack's McFly scored a 2-4 to move up to second place and JElvis drop to third.

Team Crockett/Morton Crowned 29er Worlds Champions
Medemblik/Netherlands: On the final day of the 29er Worlds 2016 in Medemblik, Tom Crockett and Harry Morton from Australia finished the job and grabbed the World title. They were crowned as the new World Champions in the high performance double-handed skiff.

Gwendal Nael and Lilian Mercier from France took silver as best youth team. The British sailors Crispin Beaumont and Tom Darling secured bronze. But the girls fought the biggest battle for being best all female team. Annabelle Davies and Hayley Clark from Australia won by one point in ninth position.

The great variety of conditions with a wind ranging between 4 and 20 knots, made it a fair championship. All scheduled races could be sailed.

Top five after 10 final races and one discard

The HISC team of Imogen Stanley, Paul Childs, Chris O'Neill and Chris Witty dominated the first day, winning four of their six races held in J/70s, showing great consistency given the shifty conditions in Osborne Bay on the Solent.

The second and third placed-boats both qualified for a spot to race in St Petersburg at Act 1 of the SAILING Champions League in August. Sunderland YC Team finished second overall securing the first spot, just one point ahead of Port Edgar YC team in third.

A full schedule of 22 races was completed over the two-day event with eleven teams from around the country competing.

A moving day out

The 2016 JP Morgan Round the Island Race had a few landmark narratives running through a windy and grey Saturday in July.

JP Morgan Asset Management were in the final year of sponsoring the race. Phaedo3 smashed the multihull race record taking 22 minutes off Sir Ben Ainslie's previous best. Prince Harry joined the crew of the Fast40+ Invictus and only narrowly missed out on the coveted Gold Roman Bowl. And, on a personal note, it was my own first ever sailing race.

I was lucky enough to join the crew of Omerta, a Jeanneau Sun Odyssey 45, and one of the five boats that the Ellen MacArthur Cancer Trust entered into the race. The Ellen MacArthur Trust takes young people aged between eight and 24 sailing to help them regain their confidence as they recover from cancer. And my first ever yacht race took on a particular poignancy as I have been lucky enough to have had cancer and survived.

So, first of all, the sailing: 1,533 boats started the race and thankfully we were one of the 985 that finished in a time just over 10 hours. With gusts of 40kt or more and the tidal overfalls at the back of the Isle of Wight, it got pretty rough... and this is where most of the casualties succumbed. Some fleets were even cancelled at this late stage. -- Richard Aspland

Rare Lighthouse Lens To Take Pride Of Place On Belfast Waterfront
A rare lighthouse lens that helped guide ships into Belfast Lough for more than a century is to get a new home on the city's waterfront, as the Belfast Telegraph reports.

The optic from Mew Island Lighthouse, one of Ireland's tallest lights, will be housed in a much more accessible structure designed by architects Hall McKnight.

The firm fended off 11 other tenders to win the commission by the Titanic Foundation for the new monument to Northern Ireland's seafaring traditions, one that's intended to last for at least another 100 years.

With a design echoing a lighthouse lantern room, the structure will house what's believed by many to be the largest Fresnel lens, produced in Paris by master glassmakers in 1887.

Story in the Belfast Telegraph 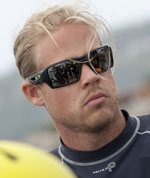 Bermuda: Andreas was a member of the Swedish Sailing Team from 2007-2012, competing in the Laser and Finn classes, before being selected by Artemis Racing to be part of the Swedish Red Bull Youth America's Cup team in 2013. After an impressive performance in San Francisco, he was invited to sail for Artemis Racing Youth in the RC44 Class.

Alongside the RC44s Andreas has also been racing on the M32 Series since 2013 with Artemis Racing's Freddy Loof, as well as competing in several offshore races such as the Fastnet Race and the Sydney-Hobart Race. In 2015 he was a member of the VO70 Maserati Sailing Team when they set a new World Record from San Francisco to Shanghai, a 7000nm record across the Pacific Ocean.

Andreas will team up with fellow Swedes; Fredrik Loof, Anders Gustafsson and Kalle Torlen, and be based in Bermuda full time until the end of the 35th America's Cup next summer.

Artemis Racing has already begun the search for a new team to represent Sweden in the 2017 edition of the Red Bull Youth America's Cup. A short list of 25 sailors, both boys and girls, have been taking part in a trial on the island of Hono, near Gothenburg.

Those selected will train together in Sweden before flying out to Bermuda early next year to prepare to race on the foiling AC45, the same boat currently sailed by Artemis Racing in the Louis Vuitton America's Cup World Series.

"Stagg Yachts possesses a tremendous amount of experience with regard to overseeing one-design racing at the grand prix level," said Dan Cheresh, president of the C&C 30 class. "Geoff Stagg and his team are very adept at promoting the class, communicating with owners and establishing proper rules and procedures. Stagg Yachts has a proven track record for running very strict and fair one-design classes."

The C&C 30 One Design is one of the world's fastest-growing one-design race-boats. There are active fleets on the East Coast, West Coast and Great Lakes regions of the United States. The class is on its way to international growth with boats recently being sold to owners in Australia and Japan. A recent class membership meeting involved 22 racing owners from the U.S. and Europe.

A unique opportunity to associate with one of British sport's most innovative training programmes becomes available today with the announcement by the UK-based fund manager Artemis that it is ending its 10-year sponsorship of British sailing.

During its decade-long association with the sport, Artemis has funded successful entries in some of the classic short-handed and solo races by British sailors, it has been the title sponsor of its own race around the Isle of Wight and donated thousands of pounds to charities associated with sailing.

But perhaps its main contribution has been as title sponsor of the Cowes-based Artemis Offshore Academy run by OC Sport. Set up in 2009, this unique "school of solo racing" has selected and trained young British sailors who aspire to compete in the unofficial world championship of offshore solo sailing - the Solitaire du Figaro - and ultimately round-the-world races like the Vendee Globe.

Over the past seven years the Academy, has supported 38 entries in the Solitaire du Figaro and 18 sailors have competed in the famous four-stage solo grand-prix. The trend in results has been upward with Alan Roberts from Southampton the best British overall finisher to date when he became the first Brit to make the top-10 last year.

To mark the conclusion of its involvement in British sailing Artemis will stage a 10th anniversary celebration at Cowes Week where some of the Academy yachts will be racing. The 10th Artemis Challenge race around the Isle of Wight on Thursday August 11th will feature two super-powerful MOD70 trimarans going head-to-head in aid of their chosen charity.

Brian Conolly, Zhik's Managing Director announced the immediate appointment of a CEO. David Crow will be the new CEO of the specialist waterborne apparel brand, Zhik, with its super-distinctive 'Zk' moniker.

Crow has an extensive, 29-year background in Fast Moving Consumer Goods with companies such as Unilever, British American Tobacco and Glaxo Smith Kline. He is a passionate sailor, having started in Sabots on the Brisbane River, where there is a six-knot tide and then moving through Lasers, Stars, the 12 Metres and many a mile in blue water racing.

Meanwhile, Brian is certainly not going far at all. His new title will be Founding Director, and the move is all about allowing Brian more time to concentrate on product development, by placing David Crow in charge of all the global commercial aspects of Zhik.

Hudson Yachts & Marine Industries Inc., Hudson Wang, and Gunboat International Ltd. (in bankruptcy) announced this week that they have successfully negotiated an amicable settlement to all pending issues between the parties, including the pending lawsuit filed by Gunboat International and the counterclaims filed by Hudson Yachts & Marine Industries, subject to the approval of the bankruptcy court.

The terms of their agreement remain confidential. The parties acknowledge that both sides worked in good faith to discuss and resolve all pending matters during this difficult time, and Gunboat International wishes Hudson Yachts & Marine Industries every success with its new line of yachts under the HH Catamarans brand.

Located next to Tower Bridge and the Tower of London, St Katharine Docks is the only marina in central London. It is managed and operated by Camper & Nicholsons Marinas, which announced a refurbishment of the site in May.

Musto will occupy part of the first floor of the International House building, which will become their corporate headquarters and showroom for its high-performance sailing, equestrian and sports apparel.

* From David Munge: re: 505 Worlds website from SAP:
Brilliant, and a lesson for other sailing web site builders. Simple, straight to the point, the results.

The MC38 delivers high performance racing in a One Design Class. Designed for international, inter-state or inter-club racing, the MC38 has a removable Carbon keel-fin for ease of transport. McConaghy build and finish quality ensure strong, fast and identical boats for maximum racing, without the need for maximum crew. Strict One Design Class - No arms race