French Victorious On 10th Anniversary
After a week of racing that included eight inshores, one 24 hour overnight offshore race and a round the Isle of Wight race held in 20-25 knots and brilliant sunshine, one race was held but ultimately abandoned on the final day of the Brewin Dolphin Commodores' Cup.

As a result, yesterday's scores stand, with France Blue claiming victory in this Brewin Dolphin Commodores' Cup on 160 points, 35.5 ahead of Flanders North Sea. The first timers from Israel were fifth overall, beating both British teams and the Celtic team.

In a week of racing on varied courses, tidal states and wind strengths, consistency was tough to achieve, but the French Blue line-up of Eric de Turkheim's A13 rocketship, Teasing Machine, the Prietz family's Ker 39, GOA and yacht designer Daniel Andrieu on his Sun Fast 3200, Cifraline 4, achieved this best. Among the three French boats there were no weak links with Teasing Machine claiming one inshore and Friday's race around the Isle of Wight, GOA winning an inshore on Wednesday and Cifraline 4 scoring a further two.

On the final day of the Brewin Dolphin Commodores' Cup, two inshore races were scheduled, the second a double points-scoring grand finale. Sadly a single round the cans race was started, and was shortened as the wind began to die. A handful of Class 1 boats were then finished before the wind died across the race course completely.

Principal Race Officer Stuart Childerley explained: "We shortened course because the wind was dying and already two boats struggled to get around the weather mark. I was keen to try and get in a race that was reasonably fair but the wind just died away so quickly that in the context of the event we didn't think it was fair."

Dackhammar Nails The Top Spot In Sopot
Energa Sopot Match Race claimed a worthy winner today in Nicklas Dackhammar and his Essiq Racing team. The talented young Swede and his crew muscled their way through the three day regatta on Poland's Bay of Gdansk with his only loss coming at the hands of Eric Monnin.

With time running out at the event due to the varied conditions, the Semi Finals were cancelled. Because of this, when the last matches were completed in the Round Robin this morning, Dackhammar ended up progressing directly to the Final, lining up against Australia's Torvar Mirsky and his Mirsky Racing Team. Meanwhile another Australian, Sam Gilmour, and his Neptune Racing team pitched up in the Petit Final against Eric Monnin and his Albert Riele Swiss Team.

Once again there were challenging conditions for the final day of the World Match Racing Tour's Energa Sopot Match Race with a trying mix of sunshine, rain that also saw the wind twice clock through 360°, while ranging in velocity from a resolute zero to a shifty 14 knots.

From here Dackhammar returns to the next event on the M32 Scandinavian Series, which takes place in Aarhus, Denmark. He hopes to then join the first event of the next World Match Race Tour, at the end of September.

Online registration is now open for four days of competitive racing split by a relaxing lay day. Idyllic sailing conditions and a warm Grenadian welcome combine to make this sailing week the perfect start to the year's racing circuit. Yachts hailing from a dozen different countries and sailors from many more nations battle it out on clear, blue water under sunny skies off a picturesque coastline.

Classes include Racing, Racer/Cruiser, J24, Cruising and Classic, so there is something for everyone, from the fast flying to the fun loving. The Regatta starts at the Grenada Yacht Club in St George's on the calmer West Coast and moves around to Secret Harbour in Mount Hartman Bay on the more challenging South Coast for a variety of courses and host venues.

After the racing there is a daily prize-giving and every night is party night, with high octane musical entertainment. Sponsors such as Island Water World, Grenada Tourism Authority, Mount Gay Rum, Sea Hawk Premium Yacht Finishes and Secret Harbour Marina will make sure you "Spice it up in Grenada!"

For more info, check the website www.grenadasailingweek.com, sign up for our newsletter, and find us on Facebook and Twitter to keep informed in the lead up to this upbeat sailing week. Register and pay by 30 November 2016, and you only pay the early registration fee of US$90 – great value for a week's sailing enjoyment.

The team's victory comes despite finishing the final race of the 14-stage series behind long standing rival for the title Derry~Londonderry~Doire, which was first across the Race 14 finish line, but not by a large enough margin to knock LMAX Exchange off the top of the overall leaderboard.

LMAX Exchange was only six points ahead of Derry~Londonderry~Doire going into Race 14, the 198NM sprint finale from The Netherlands, meaning everything was left to play for with twelve points up for grabs.

Despite Derry~Londonderry~Doire taking line honours at 2014:39 UTC last night off Southend Pier, UK, its fourth race win of the series, the team only clawed back two of the six points needed as LMAX Exchange finished just behind in third.

The Northern Irish entry beat Visit Seattle by 29 seconds as it finished in second at 2015:08 UTC, while LMAX Exchange crossed the line at 2038:30 UTC. 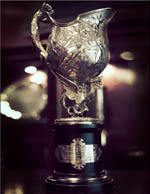 Etchells teams from yacht clubs from around the World have arrived in Cowes to compete for the Royal Thames Yacht Club's Gertrude Cup. The invitational event for the Etchells Class has attracted teams from Australia, Great Britain, Hong Kong, Malta, New Zealand, Switzerland, United Arab Emirates and United States of America. Four days of fleet racing in the UK's premier sailing waters based in Cowes and the Solent, with a full on and off the water programme.

A fleet of matched Etchells is provided, each crew sails a different hull each day to ensure fairness. Fully rigged, with new matching sails and prepared, ready to race, by the Cowes Etchells Fleet. The helm must be Corinthian, but there are no other crew restrictions. The intention is to run a minimum of three races per day, over the four day schedule.

Mark Thornburrow's team from the Royal Hong Kong Yacht Club is back to defend their 2015 Gertrude Cup win.

For daily results from The Gertrude Cup: www.yachtscoring.com

RORC Channel Race
Avenarius & Gorm Gondesen's German Ker 46 Shakti was the overall winner of the RORC Channel Race. Tony Lawson was on board his MOD 70 Concise 10 for a blast around the 125 mile course, in just 9 hours 15 mins and 54 Secs and was first boat home. Harm Prins' Volvo 70 Sanya Lan took monohull line honours in just under 12 hours.

Shakti's overall win gives the German team just under an 11 point advantage over Tonnerre 4 in IRC Zero for the RORC Season's Points Championship. Tonnerre fell behind early in the race, as the leading boats past through Hurst Narrows and try as the Dutch team might, they could not catch their German rivals.

Two yachts racing in IRC One have emerged as contenders as the overall winners of the 2016 RORC Season's Points Championship. Alan Hannon's RP45, Katsu performed well to take line honours for IRC One by handsome margin. However, after time correction, Katsu was second to Nick Jones' First 44.7 Lisa. Lisa retains the overall lead for the season and extends their advantage by four points.

In IRC Two, Andy Theobald's J/122 R&W took line honours for the class and the win on corrected time by an impressive margin.

Twelve yachts competed in the Channel Race in IRC Three, Richard Elliott's A35 Eaujet was the winner.

Sailor's will always remember their first offshore race and this weekend a special mention goes to James Tomlinson, son of the famous yachting photographer Rick. James has been racing dinghies since he was nine.

For the Channel Race, James was taking part in his first RORC Offshore on board Inspiration Of Boss in IRC Four.

The RORC Season's Points Championship has a two-week break during Aberdeen Asset Management Cowes Week. The next race in the series will be a brand new offshore event, the Île d'Ouessant Race. The 400 mile race takes the fleet from the Solent, into the English Channel, and around the massive tides of Ushant and its archipelago with a finish in the historic walled city of St Malo. -- Louay Habib

Oman Air Sneak The Narrowest Of Victories In Hamburg
Only one crucial, leaderboard changing double points race was sailed on the final day of the 2016 Extreme Sailing Series in Hamburg that saw Morgan Larson and his team on Oman Air snatch victory from the hands of Alinghi by just one point.

On an afternoon where Mother Nature toyed with the fleet on the River Elbe, Arnaud Psarofaghis and the Swiss team of Alinghi dared to dream. They finished the race in third place and looking over their shoulders saw Larson at the back of the pack.

A nail biting match race to the finish line between Larson and Land Rover BAR Academy saw the young Brits almost outwit the experienced Stadium Racers, but Larson held his nerve to pip them to the post, and with it took spoils in Hamburg.

Scallywag (formerly Ragamuffin100), owned by Hong Kong businessman Seng Huang Lee, was trailing Wild Oats XI by only a short distance when the hydraulic ram controlling the canting keel failed. The situation was considered sufficiently dangerous for the majority of the 20-man crew to be taken off the yacht and transferred to shore. The few remaining on board were nursing the yacht towards Newcastle, 150 nautical miles to the south.

Richards said that he was expecting the fickle winds to provide more frustrating times later today.

With more than half of the 384-nautical mile course still to be covered, Wild Oats XI was not expected to finish off Main Beach until after sunrise tomorrow. -- Rob Mundle

Another one for the nascent Fast 40s. Particular attention has been paid to developing a hull form that planes downwind easily but that also delivers a competitive performance in light air.

The racing yacht JUMPA LAGI, POGO 2 from the famous shipyard STRUCTURE has proven track record on the coveted Open 40 circuit. Fast in all aspects, the 40 S, which was designed by the renowned architectural firm FINOT, is a more accomplished model and provides high versatility in terms of performance.

The Last Word
May I recommend serenity to you? A life that is burdened with expectations is a heavy life. Its fruit is sorrow and disappointment. Learn to be one with the joy of the moment. -- Douglas Adams