Comanche Due To Finish Transatlantic Record Attempt On Thursday
Comanche, the record-breaking 100ft yacht owned by Jim Clark and Kristy Hinze-Clark, looks set to conclude their transatlantic record bid at Lizard Point (UK) on Thursday July 28. The latest ETA puts the Supermaxi at the finish point around 12 PM UTC (1 PM BST), which would see the experienced crew secure another major ocean record.

The boat is sailed with only 17 crew and with all manual powered winches and hydraulics for this record attempt:

France Blue Blasts Back
The Brewin Dolphin Commodores' Cup race course took on a different complexion today. A front passed through early morning leaving behind it a lumpy sea, further kicked up by a strong eastbound tide. Conditions gradually abated and the sea flattened in the afternoon, but it made for a brisk start to day four.

For the first time, today's courses were set in the western Solent, with the committee boat moored close to the Beaulieu river entrance and the weather mark off Hamstead on the Isle of Wight shore.

The lively conditions created one casualty before the start gun had even fired. On the biggest boat in the race, the Goubau family's Beneteau 47.7 Moana (Flanders North Sea), the mainsail suffered a severe luff to leech rip during a pre-start gybe. Fortunately the Belgium team had its delivery mainsail back in Cowes and raced back to fit it, but in doing so scored maximum points for missing race five.

The second race was more hair-raising when Sunrise's tactician Rob Gullan chose, rather than to tack after the start and short tack up the mainland shore before making a long starboard across to the weather mark, instead to do this in reverse, short tacking up the island shore, etc. Sunrise was alone in doing this.

Three races are scheduled for Thursday with a first start due at 10:30 BST.

No fewer than 681 young sailors have entered the 2016 Laser 4.7 and Under 21 Youth World Championships in Kiel…

With a total of 681 entries, it's not just any venue that's capable of hosting a regatta on the scale of the Laser U21 Youth World Champion - ships. But Kiel in Germany has years of experience and is taking it all in its stride as it gears up to welcome many of the world's best youth sailors. The event, from 30 July to 7 August, is open to male sailors in Laser Standard and female sailors in Laser Radial under 21 respectively and to sailors under 18 in Laser 4.7.

The biggest category is the Laser 4.7, the small-rig option that has attracted 256 entries in the boys' fleet and 228 girls. There will be 55 girls competing with the mid-sized rig, the Radial, and 142 boys in the Laser Standard. International entries have flooded in from all corners of the globe including Australia, Hong Kong and Brazil, with the inevitable strong turnout from European nations.

Kieler Yacht Club relies on some of the best regatta facilities anywhere in the world, using much of the infrastructure created for the 1972 Olympic Games when the sailing was contested on these waters. Kiel has since of course established itself as the home of sailing and racing in Germany.

Gladwell's Line - Does The America's Cup Really Need A Star Chamber?
The first meeting of the three-man America's Cup Arbitration Panel is believed to have taken place in London in the past week or so.

By choosing to operate under a veil of judicial secrecy, the America's Cup has lost credibility with many of its fans, particularly those involved in sailing.

The sailing fans know that when they, or their competitors, are involved in a protest hearing, that the members of the Jury or protest committee are known; that the date of the hearing is posted on a club or regatta noticeboard; that the subject matter of the protest is known; and that the details of the decision and any penalty are posted on the same Noticeboard.

It's all freely and publicly available information, usually posted on a website as well for all to see and know. It's a transparent process.

America's Cup organisers decided to place themselves above all that, implementing an adjudication system similar in concept to the modern-day 'Star Chamber' created in some western judicial systems to combat serious high-level crime.

Rooster International Topper World Championships
Ballyholme Yacht Club, Ballyholme, Northern Ireland: Following yesterday's weather conditions causing some races to be abandoned, the sailors were keen to today get back out onto the water and get back into racing.

In the 4.2 class Max Yuang-Ngam from Thailand continued his winning form, shooting to victory in the first race of today. Max is from Phuket Youth sailing club in Thailand who work with many disadvantaged children, Max has spent most of his life living in care homes.

Under the event rules, in order to complete the qualification stage the sailors must complete four races. In the 5.3 class, due to wind conditions all races had to be abandoned yesterday so at the start of this morning they only had three races under their belt. Luckily the first race went off without a hitch and the qualification series requirement was fulfilled. 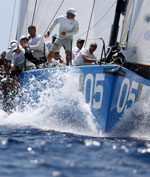 Puerto Portals, Mallorca: Two hard earned wins for Quantum Racing elevates the team which is steered by owner Doug DeVos to a lead of four points ahead of Azzurra at the 52 SUPER SERIES' Puerto Portals Sailing Week on the Bay of Palma.

The two teams which have shared all championship title wins over the first four years of the 52 SUPER SERIES, two apiece, started Wednesday locked on the same points aggregate. But Quantum Racing were on imperious form around the windward-leeward and coastal courses which were contested, winning both.

Azzurra's improvements continued with a solid second and fourth today. But Ergin Imre's Provezza went one point better, and was delighted to come away with five points for their day, a third and second which sees them second overall now, even if they share the 20pts tally with Azzurra.

A hot and very long day proved frustrating for some and pleasingly profitable for others. Once again it was the start line which was the most important factor and more often than not it was the ability to get left early which paid the first reward. The Bay of Palma's southerly sea breeze - the Xaloc - provided great racing, particularly when it picked up to 16-17kts during the early legs of the 15 miles two hours coastal sprint.

Transat Quebec Saint-Malo 2016: Sailing Into The Big Leagues
The long nautical journey from La Belle Province proved to be one long show of bravery from start to finish, with the Multi50s grappling alongside one another all the way, the Class40s jostling incessantly for position, and the Ultimate Class trimaran Spindrift 2 fully committed to its unbridled rollercoaster ride of a crossing.

The figures are there to prove just how fierce a race it was, with brand new records being set for overall race time, distance covered, and average speed.

The intensity of this translatlantic race cranked up yet another notch among the Class40 fleet of fast 40-foot monohulls. At the start line in Quebec City, no fewer than 10 of the 19 boats in the race called Saint-Malo home, with many of these homegrown boats flying the flag for architects' firms over there.

And over the course of these 3,000 nautical miles, that local knowledge would come to bear fruit. Thibaut Vauchel-Camus (Solidaires En Peloton - ARSEP), Phil Sharp (Imerys), and Isabelle Joschke (Generali Horizon Mixite) took turns strutting their stuff at the head of the pack.

On Saturday, July 16, Spanish skipper Gonzalo Botin on Tales II, a boat designed by his own brother, logged a 24-hour run averaging 15.56 knots over some 373.6 nautical miles. And every one of the leading Class40s set their own personal best in excess of 330 miles in 24 hours, pushing 25 knots at times thanks to some unforgettable swell-surfing.

Rio As You've Never Seen It
To showcase the awesome power of the PhaseOne IQ180 camera, timelapser and photographer Joe Capra, a.k.a. Scientifantastic, had to become a surgeon of sorts. 10328x7760 - A 10K Timelapse Demo is exactly what it sounds like: a timelapse video constructed out of photographs with a resolution higher than your computer can handle. Full screen this. Seriously.

devotiluca.com
An independent voice to promote the great values of sailing

"From sailors to sailors, all our passion shared with sailing lovers" is the headline of devotiluca.com. The new sailing blog, online from July 20, is dedicated to sailing enthusiasts worldwide. Devotiluca.com wants to be a space where sailors can participate and discuss together the future of our common passion.

Founded by Luca Devoti, former Olympian, America's Cup skipper and boatbuilder, Michele Tognozzi, sailing journalist and editor of Italian sailing magazine and website Fare Vela, and Jacopo Valentino, an economist and passionate sailor. They are all based in Valencia. devotiluca.com is open to contributions from top international sailors and will cover the main events, starting with the 2016 Olympic Games in Rio de Janeiro.

She will be competing in the annual Land Rover Sydney-Gold Coast race, which starts on Sydney Harbour at 1pm on Saturday. A near-record fleet of 76 yachts will participate.

The coastal classic will be Wild Oats XI's first campaign since sail damage forced her retirement from the Rolex Sydney Hobart race last December. This incident came only weeks after she had been re-launched following extensive hull modifications. Changes were also made to the sail plan at the time.

Following the Sydney to Gold Coast Race, Wild Oats XI will contest the Brisbane to Keppel race then head north for Audi Hamilton Island Race Week, which will be staged from August 20 to 27.

Yachting meteorologist Roger Badham expects it to be a slow race to the Gold Coast as light winds and an unfavourable south-flowing current are likely to prevail over the entire distance.

Wild Oats XI and the other supermaxi competing in the race, Scallywag (formerly Ragamuffin100), are not expected to finish before sunrise on Monday. -- Rob Mundle

The Marten 49 is intended for the owner who wishes to combine the sparkle of a day sailing yacht with the ability to make fast comfortable blue water passages. It is designed to be a superb family cruising yacht, a top performer at regattas and to be a fast and comfortable passage maker for world cruising. It is differentiated from all others by its detailed design, construction methods and materials that combine to provide superb performance and unrivalled functionality.

Welbourn 46ft Racing Yacht, built in 2002 and extensively refitted in 2010/11, composite carbon/epoxy construction. The deck layout of this DK46 racing yacht was also modified in 2011 for short handed cruising in addition to fully crewed racing. Winner of many races including the Rolex Middle Sea in 2012.

Ker effected an IRC revolution when his relatively lightweight Ker 40s started cleaning up two years ago. This is the latest evolution of the marque - at a size that makes it an attractive choice for offshore enthusiasts. Boat no4 has now been sold

The Last Word
People who think they know everything are a great annoyance to those of us who do. -- Isaac Asimov