In front of sold outgrandstands, the six America's Cup teams fought fiercely for the double points on offer for each of Sunday's three races.

It was a day of incredible action for the crowds who came out in force all weekend to see the first America's Cup racing on Lake Michigan. Over 200,000 fans were on Navy Pier over the course of the three day event, including close to 40,000 through a sold-out race village. On the water, the race course was tightly surrounded by a spectator fleet pushing 1,000 boats.

Weymouth And Portland Saves The Best For Last
The best of Weymouth and Portland was on show on Sunday as ten gripping Medal Races brought the final Sailing World Cup event before the Rio 2016 Olympic Games to a close.

Sailing World Cup Weymouth and Portland was the final opportunity for sailors to test themselves at an elite, official event before the summer showcase in Rio de Janeiro, Brazil.

The Medal Races provided a glimpse of what is to come at Rio 2016 with those aiming to peak for the Olympic Games topping the podium.

Seahorse July 2016
What's in the Latest Edition Of Seahorse Magazine 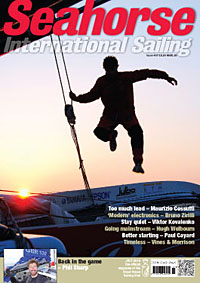 Predictable unpredictability
Remarkably, going into Rio 2016 several Olympic crews stand out above all others. Andy Rice

Higher, faster, flatter
And now it's into full series production...

NYYC 162nd Annual Regatta Presented By Rolex
Regatta participants awoke on Sunday to find the sun shining and the breeze blowing pleasantly out of the southwest. Saturday's overcast weather and evening thunder storms were a distant memory, and it appeared as if the 162nd edition of North America's oldest regatta would end on a high note. Then a cold front rolled through and the breeze shifted to the northwest and increased dramatically. By the time the boats started final preparations for the day, the wind was steadily into the low 20s with gusts approaching 30. One boat lost its rig before racing and there were plenty others who decided discretion was the better part of valor and either didn't race at all or withdrew before crossing the finish line.

While IRC 1, IRC 2 and the 12-Metres - some of the biggest boats in the regatta - did Stadium Sailing in the cozy confines of Narragansett Bay's East Passage, significantly smaller boats were battling the elements on the open ocean.

The C&C30s was the newest class at the regatta. The high-performance 30-footers look like an overgrown surfboard. But, says two-time Olympic sailor Mark Mendelblatt, the boats are surprisingly seaworthy. "We had up to 27, 28 knots of wind, and were averaging low 20s for both races. It was right on the edge, but OK."

Later this summer a fleet of a dozen or more are expected to contest the class's first North American championship during Race Week at Newport presented by Rolex. For many of the six teams sailing this past weekend, this regatta served as a high-test tune-up for the big show.

Full results of all classes: www.yachtscoring.com/event_results_cumulative.cfm?eid=1682 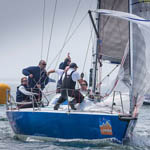 Eight sailing titles were decided over the weekend at the annual Irish Cruiser Racing Association national championships held at Howth Yacht Club where 85 boats from around the country gathered for a three-day series.

Only John Maybury's J109 Joker 2 from the Royal Irish YC retained a 2015 title with a comprehensive victory in Division 1, the largest class with 21 entries.

Although J109's took first to third in the class, top six places including two wins on Saturday sealed the victory for Maybury on Sunday as light airs failed to develop into sailable conditions.

Pat Kelly's Storm from Rush Sailing Club took second though will see Mark Mansfield, Joker 2's tactician on board next weekend for the Volvo Round Ireland Race along with winning sailors from other classes at the ICRA championships.

Storm will be competing in the 704-mile race next Saturday under David Cullen who became the Class 2 national champion on his half-tonner Checkmate XV. His class did get a single race in yesterday and a second place was enough to send him home early with the championship secured.

Quarter-tonners dominated the Division 3 top places with Ken Lawless and Sybil McCormacks' Cartoon from the Royal Irish YC edging out clubmates Barry Cunningham and Jonathan Skerritt on Quest in a single race final day that allowed the event discard to come into force.

In the Progressive ECHO stakes, for the first time taking national championship standing in 2016, Maybury and Cullen also added these titles to their haul for the weekend. In Division 0, Jonathan Anderson and Murray Findlay on Scottish entry Roxstar won while Phelan was second. Paul Colton on Cri Cri from the Royal Irish YC won the Division 3 title.

It is the third Solitaire for the 26-year-old sailor, and this victory - even if it doesn't count for the overall ranking - reinforces his status as one of the race favourites. Another of Her Majesty's subject, Will Harris (Artemis 77) finished first rookie.

Weather conditions were ideal for this warm-up in Deauville waters. After an overcast morning, the sun made its way out in the afternoon and the light wind - less than a dozen knots - required a lot of concentration from the 39 sailors.

Hierarchy had established itself from the first meters, with a leading trio made out of Alan Roberts, Sebastien Simon (Bretagne CMB Performance) and Christopher Pratt (Sourire a la vie). They stayed together until the finish line and it was Marseille native Christopher Pratt, despite his project being booked less than a month ago, who would finish second as Sebastien Simon - 26 years of age - completes the podium.

The noteworthy moment of today is definitely the British domination as it is also an Artemis Offshore Academy sailor - Will Harris - who won the rookie ranking. At only 22 years of age, he finished at a very honourable 10 place.

Top ten of the Bompard Prologue

The first leg of the race starts Sunday June 19.

The team, skippered by Matt Mitchell, crossed the finish line at 1442 UTC, 9 June after overtaking Garmin in the night following a fraught battle between the two teams at the top of the leaderboard over the last four days.

ClipperTelemed+ beat Garmin to the finish of the race from Panama by nine nautical miles. Garmin was also seeking its first overall race win, despite achieving five previous podiums already during the series so far, and finished in second place at 1535 UTC.

US-sponsored yacht Visit Seattle has recorded its first podium and best result of the series so far, finishing Race 11 in third.

The remaining teams are due to finish the race by around 1500 local time (1900 UTC) tomorrow, Friday June 10 and will make their way to Liberty Landing Marina.

The final leg of the odyssey, New York to London via Derry-Londonderry, Northern Ireland and Den Helder, The Netherlands, starts on June 20.

Erivale III Wins The Morgan Cup
Past RORC Commodore, Mile Greville racing his British Ker 39 Erivale III, is the overall winner of the 2016 Morgan Cup Race after IRC time correction. Erivale III put in a superb performance in IRC One, finishing the 108 mile race over an hour ahead of any boat in their class after time correction. This year's race was a light air reach across the English Channel, with patchy breeze and numerous wind shifts, to test the teams.

Tony Lawson's MOD70 Concise 10, skippered by Ned Collier Wakefield, took Multihull Line Honours for the Morgan Cup, enjoying light reaching conditions across the English Channel to Dieppe, Completing the race in under ten hours at an average speed of over 10 knots, Concise 10 was travelling at twice the wind speed. Concise 10s next race in the RORC Season's Points Championship will be the Volvo Round Ireland Race, where the British flyer will take on two MOD70s, Lloyd Thornburg's Phaedo3 and Oman Sail's Musandam-Oman Sail.

In the IRC Canting Keel Class, IMOCA 60 Artemis Ocean Racing, skippered by Mikey Ferguson, took Monohull Line Honours for the Morgan Cup in an elapsed time of 18 hours 32 mins 06 seconds. In IRC One, Erivale III was the winner

In IRC Two, Gilles Fournier's French J/133 continued their impressive form for the season by winning class for a third race in a row and placing third overall for the Morgan Cup Race.

In IRC Three, Arnaud Delamare and Eric Mordre's JPK 10.80 Dream Pearls was the victor, taking their third class win of the season and placing second overall for the Morgan Cup Race.

The RORC Season's Points Championship continues with Volvo Round Ireland Race, which starts on Saturday 18 June. Organised by Wicklow Sailing Club in association with the Royal Ocean Racing Club and the Royal Irish Yacht Club.

For full results for the RORC Morgan Cup Race: www.rorc.org

Given the schedule the fleet loaded up with energy drinks, bananas and baguettes and headed out for the first race in 13 knots.

In the end Lachenschmid won with a healthy 20 point margin from George Hand (GBR) in second and Dave Poston (GBR) and third. In fourth was previous world champion Daniel Henderson (GBR) and fifth position is Tom Wright (GBR) and sixth is Justo Martinez (ESP).

Congratulations to Andi Lachenschmid (GER) who is the new World Champion. The class would like to thank all those who have contributed to a fantastic event; ACO the title sponsors, Musto the class sponsors and Ovington Boats who have provided excellent regatta support from Chris Turner.

Escapada" is a astonishing beautiful sailing Yacht. It combines style, comfort, quality and high speeds. Baltic Yachts is famous for building strong but light high quality finished yachts. "Escapada" is updated every year since her launch and kept in exellent condition.

A great example of the ever popular Sydney 40. On top of this renowned design, LOCO benefits from many IRC upgrades and modifications to keep it right in touch with its rivals. NEW keel configuration in 2012, NEW Selden mast in 2014 and NEW sails in 2013 and 2014. A great overall package and ready to hit the water running.

Other recent upgrades include new longer bowsprit and conversion to tiller steering.

The Last Word
I am easily satisfied with the very best. -- Winston Churchill