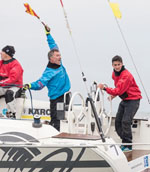 Jablonski and his crew ruled the waves on Lake Constance. Out of their 20 duels they only lost three in the preliminary round. They did not loose a single match in their quarter final, semi final and final encounters. When their spinnaker halyard broke on the downwind in race 2 of the finals and dropped into the water it took the crew less then a minute to pull the sail out of the water and and hoist it again.

Perfect Conditions Launch Finn World Masters
Knowledge of Lake Garda's winds proved an essential ingredient on the first day of racing at the Finn World World Masters as the best sailors rose to the top. Defending champion Vladimir Krutskikh (RUS), 2004 Olympic silver medalist Rafa Trujillo (ESP) and Piet Eckert (SUI) all won both races in their groups to sit on top of the 355 boat fleet.

Numb legs and sore muscles were the order of the day as a solid, and cold, 14-22 knot Ora swept down the lake challenging the fleet with some tight tactical racing. The corners proved popular, especially on the northern course.

Garda put on its best today, if slightly cold, but at least the day stayed dry for the first time since the sailors had arrived. The forecast for the rest of the week is, at best, changeable, with the usual Garda weather not fully in place just yet.

Sailing continues on Tuesday with two more races scheduled for 13.00

Thompson Holds Lead, Scheidt Moves Into Medal Position at Laser Worlds
Riviera Nayarit, Mexico) Nick Thompson of Great Britain had another good day at the races to close out the qualifying series in first place overall in the Laser Standard Men's World Championship in Riviera Nayarit, Mexico. Thompson's 2nd and 4th place allowed him to increase his advantage over Jean-Baptiste Bernaz of France to five points, a margin by which Laser Championships can be won or lost. Tomorrow the sailors will be split into gold and silver fleets to begin three days of finals series racing.

Overall Results after 8 races with 1 discard

We have a great opportunity to join the Gill sales team, a brilliant experience for the right person to make their mark with a great sailing brand.

Ideally, you will be located anywhere north of London, as the area covers the Midlands, Essex and East Anglia, stretches into Northern England, with occasional trips to Ireland as well.

An interest in sailing would be really helpful, but an ambition to understand and sell great technical apparel is essential.

You need to be self-motivated, happy to travel and crucially have an ability to work under your own steam and develop great relationships with our customers.

We offer a salary, bonus scheme and company car in return for a high level of commitment and enthusiasm.

Please apply by email with a covering note telling us why you would relish this job and a CV covering your background so far to George Kingsnorth, UK Sales Manager:

The Israeli Yacht Club in cooperation with Atarim, a municipal-owned corporation promoting tourism and recreation in Tel Aviv-Yafo, organised the largest marine festival in the Middle East in April. Sail Tel Aviv brought together several thousand people for a variety of water sports activities... including a ORC Regatta, a Flotilla that attracted well over 200 boats of all kinds, hundreds of swimmers, stand up paddleboarders, windsurfers... and a Youth Sailing Championship with 600 competitors. Organiser estimate that no less than 3000 people took part in the events.

Yaron Klein, CEO of Atarim said: " The city of Tel Aviv-Yafo, best known as the Non Stop City, cultivates values of pluralism, entrepreneurship and innovation. We at Atarim endorse the same values and have set ourselves a challenge to develop and expand the Tel Aviv coastline. Our projects include accessible beaches to everyone encourage and develop watersports and tournaments as well as positioning Tel Aviv as an attractive beach destination for tourists and residents alike."

IYC is making the case for Tel Aviv-Yafo as a venue for world class sailing events... and they have the weather and wind statistics to make this a nearly year-round venue. Temperatures and windspeeds are moderate year round.

The ORC race, SAIL Tel Aviv Yacht Cup, was unique in that it was a qualifier for sponsorship to the ORC Europeans, to be held in Greece in early July. Three races were run, with the winner in ORC1 the X-President team , an X-35 owned by Uri Sakes. The team included a number of world-level sailors from several classes, notably the 470. They will be a formidable team at the Europeans... they took three first place finishes.

Tel Aviv-Yafo is a beautiful city with its mix of old and new. The sprawling promenade goes through Old Tel Aviv Port area, the newer Tel Aviv Marina, numerous parks, beaches and all the way to Old Jaffa.

Bauhaus architecture in the White City meets with modern architecture throughout and makes Tel Aviv-Yafo very cosmopolitan. Spending a week exploring the city doesn't come close to scratching the surface, there is something there for everyone. Museums, historical sites, mosques, churches, synagogues, markets, and malls are just some of the many cultural experiences.

To top everything off was the Sail Tel Aviv-Yafo events which encouraged everyone to not only enjoy the beach but to compete in water activities or learn to sail. It was truly a once in a lifetime experience and I look forward to visiting again. -- Quinnan McCreary

Syndicate head Tom Quigg, a past commodore of the St. Francis Yacht Club, said Monday that he has informed SFYRC founder Tom Ehman of the intent to challenge.

"Something new and innovate sometimes takes a bit of time for others to get their arms around it," Ehman said. "But as other sailing events falter, sailors and sponsors see that racing Super 12s in San Francisco makes a lot of sense. It's a reliably windy and iconically beautiful venue, perfect for powerful, elegant one-design monohulls and for spectators."

The Super 12s are being designed by Farr Yacht Design in Annapolis, Maryland. They will be built by Westerly Marine in Santa Ana. -- Bernie Wilson, AP

ETNZ: Winning In The Nick Of Time
Emirates Team New Zealand won the Louis Vuitton America's Cup World Series New York in the nick of time with a huge come from behind victory!

Team Ceeref Wins RC44 World Championship
The RC44 World Championship Marina de Sotogrande had a worthy winner today in Igor Lah and his Team CEEREF crew, the second occasion the Slovenian team has claimed this prize (after Puerto Calero, Lanzarote in 2013). But this was only after some anxious moments off the Andalusian port, as Lah's crew slogged it out with local heroes, John Bassadone's Peninsula Petroleum from nearby Gibraltar.

In this scenario some match racing was inevitable and the two boats engaged in the pre-start with Peninsula Petroleum gaining a small advantage. Sadly for them the race committee called a general recall. On attempt number two Peninsula Petroleum started in traffic near the committee boat while Team CEEREF was in clear air mid-line. By the top mark Lah's team was holding fourth while Bassadone's was in sixth. However both boats were on the ascent and on the next beat moved into second and third respectively. With some careful covering from Team CEEREF, these positions they maintained until the finish, handing the Slovenian team victory by three points. 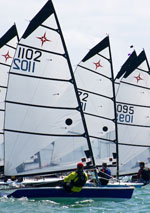 The singlehanded Supernova dinghy is currently enjoying a flourish of interest as the Class celebrates its 20th anniversary year. With entry to the 2016 National championship in Llandudno (1-3 July) already at its 120-boat safety limit, and with 30+ boats regularly racing on the open meeting circuit, the Supernova is one of fastest growing UK dinghy classes in recent years.

With generous sponsorship from Zhik, Hartley Boats, Allen, and significant contributions from the Association, the Class was able to offer entry incentives, with first 100 entries to the 2016 Nationals paying just £40 coupled with a generous array of prizes.

Other key 20th anniversary events so far have included the Oxford Carriers Winter Nationals in February at Bowmoor SC with 31 entries, and the Class debut at the RYA Suzuki Dinghy Show in March, which generated a lot of interest particularly among newcomers looking for both new and secondhand boats. The Inland Championship at Northampton SC in September is expected to attract well over 60 boats.

This lightweight epoxy singlehander, designed for close competitive racing for all sailing abilities, has proved a real attraction not only for sailors from other Classes (including some of the top sailors from the Merlin Rocket fleet), but also newcomers to the sport. One of the biggest draws in the Class' anniversary year is the Noble Marine-sponsored Travellers series, which comprises over 20 open meetings. At the recent Cotswold SC Travellers event a total of 40 boats turned out.

The RORC Rating Office Heads 'Down Under' To Meet Sailors
James Dadd, Director of the Rating Office in Lymington UK which is the technical hub of the Royal Ocean Racing Club, will be travelling to the other side of the world this month to meet with boat owners and race organisers in New Zealand, Australia and South East Asia and talk about the International IRC rating rule. IRC Owners' Forums will be hosted by Yachting New Zealand, Yachting Australia and IRC South-East Asia, giving sailors the chance to join in discussion and question/answer sessions about IRC racing.

The dates and venues are as follows:

Our latest central listing is the ultimate racer/cruiser and is considered by her crew to be a 65 foot "super yacht". Built impeccably by Knierim in Germany, she was first launched in June of 2013.

Her owner invisioned a yacht with mini maxi performance, but with an interior that is second to none and all incorporated into a package that can be raced with only 10 to 12 crew. Her race results have proven that the Botin office hit the ball out of the park with this design, as her first distance race she shattered the ARC transatlantic record and then in shorter races such as the 2014 Sydney to Hobart, she was 7th to finish boat for boat, beating all her similar sized race boats boat for boat, which resulted her being third in class behind two canting keel and smaller race boats. We believe this boat represents an outstanding opportunity to step right on the perfect racer/cruiser.

Used as a boat show demo by the manufacturer, this owner purchased her as new. ODYSSEY has been based and used in Narragansett Bay principally in NYYC and other RI based events. The yacht is captain maintained in the summer months.