MACIF On Track For Race Record Smash
The Transat bakerly from Plymouth to New York is in its final stages for Macif skipper Francois Gabart who is now just over 450nm away from the finish line. The current routing is showing Gabart's estimated time of arrival as Tuesday at 1300 EDT (1800 BST).

Now well into his seventh day of racing, Gabart is 126 miles away from his closest rival Thomas Coville aboard Sodebo, and 473 miles ahead of the third Ultime Actual, skippered by Yves Le Blevec.

Gliding towards the Big Apple at around 20 knots, the 33-year-old skipper looks set to break The Transat bakerly race record tomorrow. Gabart's mentor and friend, Michel Desjoyeaux, currently holds the record after sailing the ORMA trimaran Geant from Plymouth to Boston in 2004, in a time of eight hours, eight days and 29 minutes.

Although sailing towards a different finish line, this year's edition of The Transat bakerly to New York is in fact longer than the record-setting course to Boston. If Gabart can finish before 1730pm local time tomorrow, the record is his.

In a thrilling winner-take-all final race, Emirates Team New Zealand unhooked itself from a starting buoy to win the Louis Vuitton America's Cup World Series New York with the high score of 52 points.

Another large crowd, estimated at 100,000, turned out on a sunny day and was treated to some very unpredictable racing. This after over 75,000 came out on Saturday.

No lead was ever safe on Sunday as the wind shifted through wide arcs from the west to the north and ranged anywhere from 5 to 20 knots.

The Kiwi crew, led by Ashby and World Sailor of the year and Red Bull Youth America's Cup champion helmsman Peter Burling, was literally dead in the water at the start of Race 3. Crewman Blair Tuke had to jump in the water to unhook the starting buoy's anchor line from the catamaran's rudder. Making matters worse, the port hull was punctured by the buoy and water was leaking into the hull throughout the race.

At one point during the final race ORACLE TEAM USA looked to be in position to win. Skipper Jimmy Spithill and crew won the start and led around the first two mark roundings. But Dean Barker's SoftBank Team Japan grabbed the lead by working the right side of the course while ORACLE TEAM USA struggled on the right side. In the end the reigning America's Cup champion placed second in the race and second for the series.

The Louis Vuitton America's Cup World Series now moves onto Chicago, June 10-12. After that it heads to Europe for events in the U.K. in July and France in September.

Light winds on the second day of the Finn Gold Cup in Gaeta meant only one race could be sailed. Phillip Kasueske (GER) sailed very well to win his first ever major international Finn race.

The win moves him up to second overall after three races behind Deniss Karpak (EST), who placed 13th in the race. Piotr Kula (POL) crossed in third to end the day in third overall.

For the second day running the fleet were held on shore for an hour before going afloat and the postponement continued afloat for a while before one race was sailed in 6-9 knots. There were a number of high profile black flag disqualifications including long time race leader Jorge Zarif (BRA). In fact, four out of the top 10 finishers crossed the line to find their sail number on the board.

Racing is scheduled to continue on Tuesday at 13.00 with even lighter winds forecast, though better wind is expected for the rest of the week.

Seahorse June 2016
What's in the Latest Edition Of Seahorse Magazine 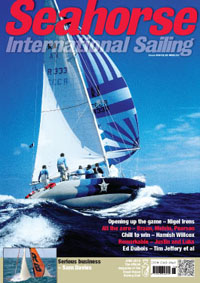 World news
Vincent Riou will not be taking foils around the world with him, VPLP will design the foiling Figaro 3, as rival designers fume, New Zealand aims to fill in a rather irritating gap... Rio waters hold few fears for Mat Belcher's tight 470 team, Peter Holmberg does his bit, as Dave Pedrick and Gary Jobson get the laughs. Dobbs Davis, Ivor Wilkins, Blue Robinson, Patrice Carpentier, Andy Rice, Carlos Pich

Rod Davis
Don't be afraid to share to get ahead

World Sailing
Surviving after the Olympic circus moves on

French Victorious In Hamburg
Xavier Rohart & Pierre-Alexis Ponsot are the SSL City Grand Slam Champions, winning 3000 points for the SSL ranking system and US$25,000. After an intense battle between 86 Star teams, battling through fourteen races in just five days, a boat length was the only difference.

On tight windward-leeward courses on Lake Alster, Hamburg, Germany, some of the finest, most intense yacht racing, was witnessed by over 100,000 people.

Eight teams contested the SSL City Grand Slam quarterfinal, with the top five boats from the race, going on to the semifinal.

Storm Trysail Club Announces Dates For Quantum Key West Race Week 2017
Larchmont, NY: The Storm Trysail Club is pleased to announce dates for the next edition of Quantum Key West Race Week: January 15-20, 2017. The event will feature the same successful format as in past years: one day of pre-race Registration and practice, followed by five days of inshore and short offshore course racing off the island of Key West.

"Our competitors and sponsors were extremely happy with how we managed the regatta this past January, even in our first year," said John Fisher, event chairman from Storm Trysail. "We had many challenges - such as the very windy weather for a few days during the event - but all our feedback has been positive, so we are going forward with plans to organize this event for 2017. We want everyone to know our decision and plan for the dates now to get their housing, dockage and other logistics in place to join us again in January."

The Notice of Race is being drafted now and will be available soon, as will the event website to start accepting entries. Once open for entries, the first discount entry deadline will be earlier this year, on July 1st, to help deliver the best value to those teams who can commit early to attending the 2017 event.

For more information about Quantum Key West 2017, visit the event website at www.keywestraceweek.com

For more information about the Storm Trysail Club, visit www.stormtrysail.org

The global race begins on November 6.

Wales also picked up the Dinghy Trophy following an impressive performance in the Topper and RS Feva classes, with two sailors in the top five in both.

The South East Zone dominated the windsurfing classes, securing first and second in the 6.8m and 7.8m Techno.

Techno
The most consistent performance of the weekend goes to 5.8m Techno windsurfer Oscar Shaw, he won all seven of his races

Optimist
Close racing for all sailors in the Optimist class, and it came down to the wire; Joey Taylor's (Buckwater SC, E) second in the final race was enough to give him the overall win.

Topper Harris Cartwright (Clyde, Scotland) and Isabel Wallwork (Redesmere, N) battled it out at the front of the Topper fleet all weekend, Cartwright took the final victory and Championship as he crossed the line in seventh

Some of the newcomers to the Tour have also showed flashes of brilliance in today's light conditions, three-time Danish Olympian Michael Hestbaek (DEN), Team Hydra, winning two of his heats against an experienced group that included reigning Tour World Champion Ian Williams (GBR), GAC Pindar. The 49er Olympic gold medallist and Volvo Ocean Race skipper Iker Martinez (ESP), Team Espana, won one of his heats easily, although finished 4th in the next. Consistency is very difficult in these short-course races lasting little more than 10 minutes, and that's the difference between the talented Tour rookies and the more seasoned M32 sailors like Canfield.

Tuesday concludes the fleet racing phase, and is a crucial day for the lower-placed teams to fight their way up the rankings and do their best to avoid the Play-Offs.

Live coverage will be shown at www.wmrt.com from 1400 local Danish time

Canfield Lays Down A Marker
Defending champion, Taylor Canfield and his US One team stamped their authority on the M32 Scandinavian Series, decisively winning the season's opening event in Copenhagen.

The Danish capital laid on July-like conditions for the three day competition, with racing held on Tuborg Havn, just off the clubhouse of the Kongelig Dansk Yachtklub (Royal Danish Yacht Club), the event's hosts.

The breeze filled in from the southeast and built to 12 knots, more than adequate to get the lightweight speed machines flying their hulls. Once again there was a strong turn-out ashore by Danish fans keen to witness the spectacle, the near capsizes and the tight finishes between the seven international teams.

As to the competition compared to 2015, Canfield says it is a lot higher: "People have been putting the time in on the boats and some catamaran guys have come in and are pushing hard, but that is only pushing us to get better."

A final mention must be made of Mans Holmberg, the 19-year-old son of Swedish match racing legend and America's Cup helmsman, Magnus. This was only his second regatta and his first time fleet racing it. And yet he came close to winning today's third race.

This young sailor has earned himself great respect throughout the class this week and hopes to compete in the remainder of the M32 Scandinavian Series, which resumes in Gothenberg, Sweden over 16-18th June.

Professionally maintained, and in excellent condition. Built as a Thoroghbred Racer, raced for 3 years, and refit into a luxury racer/cruiser. Built in Turkey, and has been sailed to the West Coast of the United States.

Dual wiring 220v and 125v with chargers, inverters, and outlets for each.

Fore and aft staterooms have their own ensuite heads and showers, centerline queen beds, and seating. Captain's stateroom has a double bed and ensuite head/shower.

Dinette has seating for 10 with entertainment center and settee. Large navigation area to plan routes and monitor progress.

Great looking cruiser racer that is optimised for performance ocean crossings and which offers speed, comfort and epic passage times.

The Last Word
What makes photography a strange invention is that its primary raw materials are light and time. -- John Berger