Rampaging At The Head Of The Transat Bakerly Fleet
Two of the fastest racing machines in sailing are currently lighting up the top of the leaderboard in The Transat bakerly as they rampage across the Atlantic just a few miles apart.

After two full days of racing in the 3,050-mile classic from Plymouth to New York, the leading pair of Ultimes, Macif skippered by Francois Gabart and Sodebo skippered by Thomas Coville, are thrashing along at average speeds of over 30 knots.

The two giant trimarans are being pushed to the limit and have already covered more than 1,100 nautical miles since the start on Monday afternoon. But most of that distance has been eaten up by miles to the south, leaving the "miles-to-go" figure to the Big Apple still up around 2,500.

This afternoon the two giants were about 30 miles apart about 550 miles west, south-west of the southern tip of Portugal, with Sodebo marginally ahead in terms of distance to the finish by virtue of its more northerly position. Current routing models suggests these two could finish in five days time and will sail a course downwind to the south of the Azores.

About 400 miles north of them, the leading boats in the IMOCA 60 monohull fleet and the Multi50 trimarans are now heading out into the Atlantic after turning to starboard off Cape Finisterre. For these skippers conditions are manageable at present, but in all their minds is an appointment with strong headwinds and big seas that will hit them on Friday morning.

* Shortly after midnight, on May 4th, Edmond de Rothschild skipper Sebastien Josse, was among the leaders in the 6-strong IMOCA 60 fleet, as the boats raced around the north-west tip of Spain off Cape Finisterre, when the Frenchman reported damage to his mainsail.

In 25-30 knots of breeze, the foiling IMOCA broached during a gybe, resulting in irreparable damage to the sail's battens. Josse was forced to head approximately 80nm to the Spanish port of Vigo in Galicia, where he will be joined by members of the Gitana Team.

At the time of the incident, Josse was locked in a battle at the front of the IMOCA 60 fleet with Vincent Riou on board PRB and Armel le Cleac'h's Banque Populaire, with just 3nm between him and leader Riou. 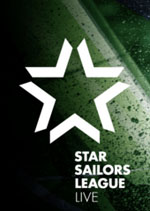 There were snakes and ladders on the second day of qualifying rounds for the Star Sailors League City Grand Slam on Lake Astler, set in the heart of Hamburg, Germany's second largest city. A light gradient wind from the north produced difficult conditions to master. The land effects around the lake produced a course with more traps than a prophet's tomb. Tomorrow is the last day for the qualifying section of the SSL City Grand Slam, the top 30 boats will go through to the second round and 56 teams will be eliminated.

Only the top 30 teams will qualify for the second round. First group will start at 12.00 CET with live coverage of the action starting at 11.45 CET, with expert commentary from special studio guests. On the water, the latest in hi-tech camera technology, as well as Virtual Eye 3D Graphics, will provide thrilling viewing. Armchair sailors can also race the course with Virtual Regatta.

Six America's Cup contenders will match up this weekend in a tricky, unpredictable battle on the Hudson! Read what factors the teams are facing for #ACWSNY in an expert preview by North Sails president and America's Cup commentator, Ken Read

Will you be at AWCS New York?

We want to hear from you! Show us your sailing spirit by sharing your best moments from #ACWSNY with North Sails on WhatsApp! Let's show the world what New York is made of!

Great Expectations
A record entry of nine TP52s will compete over the coming days at Gaastra Palma Vela regatta as the fleet prepare for the start of the 52 SUPER SERIES later this month.

There was a time when this Mediterranean curtain raiser was considered purely a training regatta, an opportunity to check in against the opposition, to test setting and polish crew work in readiness for the five event 52 SUPER SERIES. But so close and tight will the racing be between the TP52s on the Bay of Palma in this high quality fleet that, come Sunday, this will very much be a regatta title worth winning.

Last year's event proved to be a great litmus test for the coming season. Azzurra went from winning Gaastra Palma Vela to overall victory in the 52 SUPER SERIES and the TP52 World Championships, proving in Palma that they had an edge on the pack which they never really ceded during 2015.

Teams have been warming up on the Bay of Palma over recent days, stepping up their processes from speed testing and two boat tuning - double 52 SUPER SERIES champions Quantum Racing have been working in close harmony with new Quantum Sails stablemates Platoon, Harm Müller Spreer's German flagged team - transitioning to informal training races as the practicing fleet grows.

Weather conditions over the four days of windward-leeward racing are expected to be changeable and unsettled. Normally were the reliable, set-your-clock-by-it Palma sea-breeze to blow each and every day then it would be universally welcomed, but in fact a range of different conditions for this early season event is of more practical value to the nine crews.

Phill Maxwell has from April 2016 joined Evolution Sails at their newly opened office in STP Shipyard in the middle of the Superyacht hub of Palma de Mallorca. Phill will be working with project management, customer support and sales.

Phill has the last 7 years been working with Doyle Sailmakers. He was educated Naval Architect with honors degree in New Zealand and then worked for 4 years as a contract yacht designer. He has an extensive sailing experience from competitive sailing and the Superyacht racing circuit as tactician and trimmer. His knowledge and experience from the professional and technical aspect of sail design and development has thus evolved through his wide experience. He has been responsible for and involved in major and unique projects for high-end yachts.

Phill states that "I am excited to join the ambitious Evolution Sails team which has a refreshing approach to products and customer service. Our ethos is mutual, we want to get up there in the front by developing the business at the same speed as this challenging and rapidly moving industry".

Evolution Sails is a premium worldwide sailmaker originating in New Zealand, and is now well established also in Europe with its boutique service loft for superyachts in Palma. Evolution Sails is thus selling sails to the larger yachts in the industry, and is involved in new and exciting projects. "We are extremely pleased with Phill joining our team, thereby contributing with his extensive knowledge, experience and drive", says Evolution Sails director Siggi Mansaker.

Due to its increased workload, Evolution Sails is now looking for another experienced sailmaker for its service loft in Palma as soon as possible.

The Herreshoff Fish Class: The First 100 Years
Click on image to enlarge.

Alec Brainerd of Artisan Boatworks in Rockport, ME will give us a tour of his restoration of the Fish Class SCULPIN. He'll also talk about building Fish Class replicas at his shop. SCULPIN will be at the museum for the 7th Classic Yacht Symposium and will be available for viewing.

This presentation discusses the origins and history of the Herreshoff 16-foot Class (aka Fish Class) from 1916 to 1938, with particular emphasis on HMCo #816, SCULPIN. It goes on to recount the later history and 2016 restoration of SCULPIN at Artisan Boatworks in Rockport, Maine, and the construction of a new Fish Class replica called TULIP. General sailing characteristics and identification of existing boats are also covered.

After many years working in boatyards as a shipwright and crewing on large classic yachts around the world, Alec, a Maine native, founded Artisan Boatworks in 2002. He lives in Rockport with his wife and two daughters. Alec and his family enjoy skiing and the Camden Snow Bowl in the winter months, and sailing their Sparkman & Stephens yawl NORA in the summer. For more information about restorations and construction of new replicas at Artisan Boatworks, please visit www.ArtisanBoatworks.com.

This lecture is presented as part of the 7th Classic Yacht Symposium.

Thursday, May 19th
Reception begins at 6 pm. Lecture at 7 pm.

Advance registration is highly suggested to ensure adequate seating for the lecture. 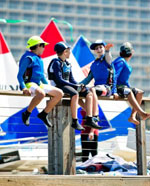 Shahar Tzuberi, an Israeli windsurfer and Olympic bronze medalist and Maayan Davidovich, an Israeli Olympic windsurfer attended the opening of the Israel Youth Sailing Championship in memory of Major Asaf Asulin hosted by Tel Aviv marina, during which over 600 children will compete in the national championship.

The event took place as part of SAIL TEL AVIV YAFO 2016, the largest maritime sports festival, initiated by "Atarim" and the 'Israel Yacht Club Association' in collaboration with the Municipality of Tel Aviv, taking place for the first time during 'Chol Hamoed Pesach'- April 18-28- with the participation of hundreds of yachts, surfers, kayaks, SUP's, swimmers and marine enthusiasts.

Seibel served as Director of Communications and Olympic Media Strategy for the British Olympic Association from 2009-2014 and before that was the Chief Communications Officer for the United States Olympic Committee. The Rio 2016 Olympics will be his 10th Olympic Games assignment.

Two of the world's finest sailing photographers, Jesus Renedo and Pedro Martinez, have been appointed as World Sailing's Official Rio 2016 Photographers and will deliver international imagery across the event.

* From Malcolm McKeag: I wonder will there be any sort of official investigation into the causes of the two French yacht v ship collisions reported in Scuttlebutt Europe today - the equivalent, perhaps, of the Marine Accident Investigation Branch (of the Department of Transportation) here in the UK.

Apart from a self-admitted absence of adequate watch-keeping in at least one of the cases it would not surprise me if another factor were the speed of our modern generation of ocean racing yachts (see YouTubes passim).

Many years ago, sailing with Robin K-J in the 60ft McAlpine-Downie-designed British Airways catamaran, I was struck by the careful way Robin alerted quite distant ships to our presence, almost as soon as they popped over the horizon. "Large blue vessel heading south-west this is sailing yacht British Airways on your port bow. My course is zero-two-zero degrees and my speed is sixteen knots - I say again. My speed is sixteen knots..."

His thinking was that most watch officers in a ship doing, say, 15 knots and seeing a sail six miles away would assume the sail to be to all intents and purposes stationary, rather than on a vessel just a few minutes away. It seemed to me a most sensible practice.

Classic S&S from 1976 always stored under cover and heavily updated - bit of a barn find really!

The latest in the line of competitive 40 footers, comes from Mark Mills who has been arguably one of the top designers over the last decade for IRC rated yachts in the 35 to 45 foot range as well as being very successful in the mini maxi class. The Mat 1180 is a new design and is very light for her size and rating.

The Last Word
When men yield up the privilege of thinking, the last shadow of liberty quits the horizon. -- Thomas Paine