Transat Bakerly 2016 Sets Sail
The 25 boats in The Transat bakerly 2016 fleet set sail today on one of the great races in solo sailing, the 3,050-nautical mile passage across the north Atlantic from Plymouth to New York.

Spectators both on shore and on the water turned out to watch as the mainly French fleet gathered under grey skies on Plymouth Sound to answer the starter's gun fired from the decks of the Royal Navy frigate HMS Kent at 14.30pm.

The forecast for this year's race - the first time this classic has been staged since 2008 - is for a reasonably quiet start but for 45-knot headwinds and big seas for the leading yachts by Wednesday, as they head into the Western Approaches.

The fleet is divided into four classes, each of which will produce an official winner of The Transat bakerly. The fastest boats are the giant trimarans of the Ultime class, three of which are battling it out for line honours, with the first expected to reach the finish at New York in around eight days.

Behind them comes the five-strong fleet of smaller Multi50 trimarans which could fly across the "pond" in 12 days, alongside the six IMOCA 60s - the state-of-the-art monohulls used in the Vendee Globe solo round-the-world race that starts later this year.

The slowest boats will be the smaller monohulls of the 10-strong Class40 fleet which should take around 15 days to complete the course, but in which we should see some of the tightest racing.

Alongside the fleet is a one-off entry by the French racing legend Loick Peyron who is sailing Eric Tabarly's 44ft wooden ketch Pen Duick II in the same trim as she was when Tabarly raced her to victory in The Transat (then called the OSTAR) in 1964. Peyron is expecting to take around 27 days to reach the finish at New York.

Hamburg Is Ready For The SSL City Grand Slam
The curtain call for the first SSL City Grand Slam was the official Opening Ceremony, on  Monday, 2nd May. The spectacular event was held at the prestigious and iconic Town Hall of Hamburg, Germany.

All of the 180 Star sailors, representing 20 Countries, gathered in the historic building for the welcome messages of city and sailing authorities just a few hours before the warning flag for the first SSL City Grand Slam race will be lifted tomorrow, Tuesday 3rd May at 10 AM CET. On lake Alster, every day to Saturday 7th May, 90 Star teams will race to win the first SSL City Grand Slam, organized by the Star Sailors League and the great support of the Hamburg and Luebeck Bay Starfleet and Norddeutscher Regatta Verein.

The Prize Purse for the SSL City Grand Slam is CHF 100,000 shared between the top twenty teams. Races are scheduled to start each day at 9 AM, from Tuesday 3rd May to Saturday 7th May. The regatta will consist of a Qualifying Series and a Final Series. The Qualifying Series will have a first and a second round. In the first round races will be sailed in groups decided by the organizing authority and a combined results list will be produced. VIPs will also need to sail this first round of Qualifying Series.

The first team to cross the line during the Final will be the first SSL City Grand Slam winner and also awarded with the 50th Erich F. Laeisz-Prize. 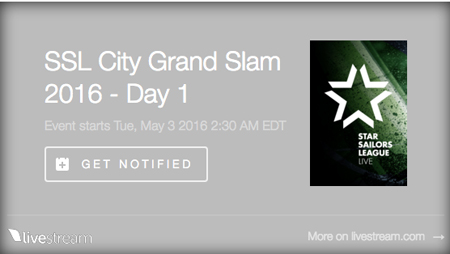 Pintia's Triumph In Le Havre
Course Cowes - Le Havre (133 nautical miles).
After a stunning performance over the Bank Holiday weekend, local Le Havre boat Pintia is the overall winner of the 2016 Cervantes Trophy Race. The French J/133, racing in IRC Two, was skippered by Gilles Fournier and crewed by the creator of the Louis Vuitton Cup, Bruno Trouble and past Commodore of the Société des Régates du Havre, Corraine Migraine.

Pintia's big win was set up right from the start when the French team chose the north shore of the Solent and led overall into the English Channel. Squally conditions prevailed south of the Isle of Wight with several yachts damaging sails in the 30 knot gusts, accounting for the retirement of last year's class winner, Harry Heijst's Winsome and Brian Wilkinson's Rigit On Wild Child. Lighter conditions prevailed for the majority of the fleet as they crossed the English Channel but Pintia managed to stay in good breeze to claim overall victory. Pintia was second overall last year.

In IRC Four Noel Racine's JPK 10.10, Foggy Dew went one better than last year, winning the class. In the Class40 division, Christophe Coatnoan's Partouche was the winner, ahead of Tony Lawson's all girls team racing Concise 2, skippered by Joy Fitzgerald.

The RORC Season's Points Championship continues with the North Sea Race, which is weighted at 1.2 for the championship. The North Sea Race is scheduled to start on Friday May 6th from Harwich bound for Scheveningen, approximate race length is 180 nautical miles across the North Sea.

Alinghi went into the finale of Act 2 with the narrowest of leads over rivals and Act 1 winners Oman Air, and all to play for as the fleet took to the stadium race course in 8-10 knots of wind, enough for the GC32 catamarans to 'fly' on their hydrofoils.

With a thick fog descending on the race course Race Director Phil Lawrence decided conditions were not safe to hold the last scheduled race.

It meant race 18, the sixth of the day, counted for double points, handing a full 24 to Oman Air, but it was not enough to overtake Alinghi and Larson's men finished just six points short.

The victory for Alinghi means they move up the overall leaderboard into second, but Oman Air still top the standings by two points going into Act 3 in Cardiff, UK from June 23-26.

Destremau Wins Calero Marinas Solo Transat
Crossing the finish line at 9h55pm UTC in Newport, Sebastien is also now officially qualified for the next Vendee Globe. "It's really special and magic to win a Solo Transat here in Newport. When you cross the line, you cannot avoid having a thought for all of the big names in sailing that did it before. The Desjoyeaux, Peyrons, Joyons and all the others with obviously the master of us all : Eric Tabarly".

FaceOcean's skipper, the rookie of solo sailing, left Lanzarote (Canary Islands) on April 15, some 66hours after the official start, or 450 nautical miles behind the leader. It will take a week for Sebastien to catch up on the leader, then he uses a storm to pull away. "The decision to face the storm instead of running away from it was not an easy one as it presented some risks. I hesitated a lot but eventually decided that it was well worth it, because after the storm the weather up in the North was very favorable. My competitor elected to go south and that was basically the end of his chances."

"Through our website www.faceocean.fr, you can support our campaign and stick your selfie on the hull of faceOcean for the next Vendee Globe. You can also buy some of the goodies we have on offer in our 'boutique'. What's next? we'll need three days to prepare the boat before sailing her back to France where faceOcean's team is eager to carry out the final preparation ahead of the Vendee Globe due to start from les Sables d'Olonne on november 6.

Aberdeen's original five year title sponsorship commitment of Cowes Week came to end after the 2015 regatta. The support offered to Cowes Week Limited from Aberdeen Asset Management can be seen as a sign of Aberdeen's desire to ensure the 2016 instalment of Cowes Week is just as successful as previous years.

Cowes Week, which is looking to secure a new title sponsor for 2017 and beyond, has evolved enormously since its beginning in 1826 and now has between 800 and 1,000 boats competing in up to forty different classes in early August each year. Around 8,000 competitors now participate, ranging from Olympic yachtsmen to weekend sailors, and the event attracts over 100,000 visitors to Cowes for what is one of the highlights of the British social and sporting calendar.

Along with Aberdeen Asset Management, local businesses, yacht clubs and supporting sponsors have worked together with Cowes Week Limited to guarantee the success of this year's regatta and to help the event attract a new sponsor from 2017 onwards. Racing will be as exciting and competitive as ever, and there will be a buzzing shoreside scene for both competitors and visitors to enjoy.

This year's Aberdeen Asset Management Cowes Week takes place between August 6 and 13.  For more information about the event visit the official website: www.aamcowesweek.co.uk

Boats were split into five starts based on their RHKATI ratings, with the HKPN rated entries starting first, and the TP52 of England, Ker 42 of Ireland and Mills 41 of Scotland departing from in front of RHKYC Kellett Island some 90 minutes later.

Race Officer Lucy Sutro had enough confidence in the conditions to set the boats a course which took them outside the eastern harbour limits to Junk Bay, with the fleet rounding TCS 4 before returning through Lei Yue Mun gap and rounding Tai Koo Shing and Kowloon Bay, before passing Hung Hom channel marker and coming in for a committee boat finish close to Kellett Island.

After 2h 27 minutes, das Busch took the gun, ahead of the Australian Flying Fifteen of Oliver Merz and the Kiwi Etchells of Greg Farrell. A steady procession of boats arrived at the finish and, after handicaps were applied, the Kiwi team on Ambush emerged victorious, just over two minutes ahead of the Germans.

The 'Tyfoon' is a cruiser / racer designed by Satellite Yacht Design / Kees van de Stadt and professional built in epoxy and fiberglass. The result is a very stiff and light body, which gives her excellent sailing characteristics. The yacht has a retractable keel (hydraulic) with variable depth of 2.84 to 1.64 meters.

Utilising Vrolijk's latest TP52 hull but much lighter (7,290kg) without internal ballast, the VPP shows a big performance gain compared to existing TP52 designs - with an upwind improvement of 2% and offwind gains between 3 and 5%...

The Last Word
Just because you're paranoid doesn't mean they aren't after you. -- Joseph Heller, Catch-22