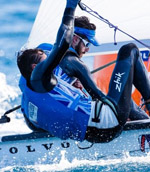 As the countdown to the Rio 2016 Olympic Games reached #100DaysToGo, the opening day of Sailing World Cup Hyeres saw sailors turn their focus to the natural elements, wind and water.

Those elements came in strong in the form of the famous Mistral. The north westerly blew up to 28 knots with a slight sea state that enabled the 470s, 49er, Finn, Laser, Laser Radial and RS:X to complete a full schedule of racing. For the 49erFX and Nacra 17, scheduled in the afternoon, the breeze was simply too strong and only the Nacra 17 completed one race. The 2.4 Norlin OD and Sonar completed a race apiece.

Racing on Thurday 28 April is scheduled to start at 11:00 local time and the 49erFX and Nacra 17 fleets will catch up on their missed races. -- Daniel Smith, World Sailing

The largest marine event in Israel's history is underway in Tel Aviv. Sponsored by Atarim and held at the Israel Yacht Club, the event seeks to promote ocean sports to the people of Israel, and raise the profile of yacht racing events there. The event started last week with the Youth Sailing Championships, with nearly 600 entrants.

Wednesday's kayak, swimming and stand up paddleboard (SUP) events were cancelled due to choppy seas and are scheduled for Thursday... which will make for a very busy day, as an ORC scored yacht race (a qualifier for the ORC Europeans) and a flotilla sail from Tel Aviv - Yafo to the Port of Jaffa will also take place.

SUP is popular in Israel, in no small part to its promotion by Gal Fridman, a double Olympic medallist in windsurfing (including Israel's only Gold Medal, won in the Athens Games in 2004).

The driving force behind the growth of ORC in Israel is Roni Raviv, an Israel Yacht Club (IYC) member, inventor and CTO of GreenRoad (driver/freight metrics and behavior) who sails a Bavaria 35 Match. In 2015 the Israel Yacht Club switched from its local rating system to ORC with 70 boats.

"We want Israeli boats to participate in ORC and bring a European Championship event to Israel" said Raviv. Israel boasts a year-long sailing season and the IYC is starting to think internationally with its yearly joint regatta with Cyprus in October and a unique sponsorship program based on this week's ORC event: the winning boat gets supporting funds to compete in this year's ORC European Championship.

To be eligible, the team for the Europeans must include at least four crew from this week's race; if the winning boat is unable to compete in Greece or garner the crew requirement, the second place boat gets the money to compete. This has sparked a surge in registrations.

The favourite team is said to be an X-35 named X-President, with Shai Bachar as skipper. Bachar represented Israel in the 470 Class at the 1992 Games in Barcelona (along with fellow X-35 team mate Erez Shemesh). 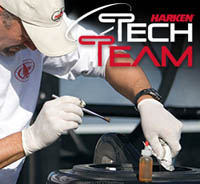 Harken Tech Team representative Francesco Canzi and Jochem Urban will keep the Maxi and TP52 fleets race-ready and flying during the 2016 Gaastra Palmavela regatta, Mallorca, Spain. Francesco and Jochem will be onsite and available from May 3 - 8, with plenty of spare parts in stock to keep your gear primed and rolling.

Loick Peyron's Slow Road To New York City
Loick Peyron has raced some of the fastest and most modern boats on the planet during a long and glorious career, but in the The Transat bakerly he is going to take his time - and he can't wait.

Sailing alongside the race on board Pen Duick II, the boat sailed by Eric Tabarly to victory in The Transat (then the OSTAR) in 1964, Peyron will do it the traditional way at an average speed that he can count on the fingers of one hand.

Speaking in St Malo, ahead of The Transat bakerly Warm-Up to Plymouth that sets sail tonight, Peyron said this type of transatlantic voyage was something he had wanted to do for a while.

"For many years I have wanted to cross the Atlantic in the same way as I did the first time when I was 19, racing in the Mini Transat with just a sextant and a self-steering system," he said as he made final preparations on board Pen Duick II.

"I've wanted to do it again in this way for many years, but I needed a reason," he added. "What better reason than as a tribute to the sailing master and legends of the past like Eric Tabarly? So I asked the owners of Pen Duick II if I could sail The Transat bakerly, the same way as Eric did 50 years ago."

Peyron is going to cross the north Atlantic in a time-warp. Apart from some modern safety equipment he will be relying on 1960s-era technology. "The boat has the same rig (as Tabarly used), the same sails and the same self-steering system, which is very nice," he said. "It's all super-slow, so I'm taking a lot of books."

Two New Cowes Events Added To J/70 Calendar
The Royal Yacht Squadron and the Royal Thames Yacht Club will each be hosting a new event on the J/70 calendar this summer.

The two new events are open to anyone who has joined the J/70 Class Association, whether they own a boat or have chartered one. Participants who are members of one of the two organising clubs will be able to charter a J/70 from the RYS and RTYC fleets based at Shepard's Wharf in Cowes.

The proven format of windward leeward race courses from a committee boat in the Solent will be format of the event with up to four races each day.

Six Vendee Globe Skippers Competing In The Transat
On Monday 2nd May, six sailors competing in the 2016-2017 Vendee Globe will line up for the start of the Transat bakerly. Among them, five who are hoping to win both this legendary race across the North Atlantic and the iconic French solo round the world race next winter.

The Transat bakerly is one of the qualifying events for the Vendee Globe further confirming the special links between these two great events.

Three of the skippers and IMOCA boats competing in the Transat bakerly are already qualified for the 8th Vendee Globe, Vincent Riou, Jean-Pierre Dick and Sebastien Josse. Three others are racing not just for line honours, but also to get their 'ticket' to the Vendee Globe: Armel Le Cleac'h, Paul Meilhat and Richard Tolkien.

The Transat is going to be a fantastic test for new technology with three of the new foiling IMOCAs, Banque Populaire VIII, StMichel Virbac and Edmond de Rothschild, competing against three of the IMOCAs with daggerboards, including Vincent Riou, winner of all the recent races with his PRB, and Paul Meilhat's SMA, which is none other than François Gabart's former MACIF, the Vendee Globe title-holder.

Armin Strom Sailing Team To Compete In GC32 World Tour
ARMIN STROM Sailing Team is proud to announce a fresh new team packed with both experienced foiling sailors and talented youngsters ready to take on the 2016 GC32 Racing Tour which starts in May.

Having spent winter 'down under' in New Zealand preparing for the 2016 European season skipper Flavio Marazzi has selected a strong international crew to go up against the nine other teams contesting this year's GC32 Racing Tour title.

Armed with a new boat and a new crew ARMIN STROM Sailing Team is fully prepared to take on the challenge of the five tour events spanning Italy, Spain and France.

Delighted For The Bermuda Diversion
A Dutch sailor embarking on a round-the-world-trip to raise money for cancer research took an unexpected diversion to Bermuda after running into technical difficulties.

Luc Overtoom set sail from Amsterdam Harbour on July 26, 2014, for a two-year sail in memory of his late wife Trudy who died of breast cancer in 2011 and to raise money for the VUmc Cancer Centre Amsterdam - a leading centre for cancer research and treatment.

However, the spreader on his mast broke 500 nautical miles short of New York, just 150 north west of Bermuda. Mr Overtoom told The Royal Gazette: "The mast was broken on the starboard side. The sails were up but it was dangerous to tack so I was forced to go somewhere on the starboard, which is why I ended up here. I am very happy with it!

"It is my first time in Bermuda. When we were 13 miles off shore we contacted the radio and immediately you hear that people are very polite and helpful - they wanted to help me to come ashore.

"When you are on shore it is the same. Yesterday, an old lady stopped me and we had a nice time talking. My crew are always received with open arms I don't know why but people are very gentle. They have gone to the Peppercorn Ceremony today and they have been to Dockyard.

"I met a Dutch guy who works for the America's Cup on the Japanese boat.

"I'm thinking to come back next year for the America's Cup. Now Bermuda feels closer." -- Sarah Lagan in the Royal Gazette

Christian Kamp To Make His Debut In New York
Artemis Racing is gearing up to take revenge at the upcoming Louis Vuitton America's Cup World Series event in New York (May 6th-8th). The last event in Oman back in February, proved frustrating for the Bermuda event winners, a string of early or bad starts (OCSs in sailing jargon) and penalties was compounded when the team snagged a line anchoring the top mark in the final race.

The Swedish team will be looking for an improved performance and a podium finish in the Big Apple, and is pleased to announce that Christian Kamp will make his debut on the foiling AC45s.

He joined Artemis Racing in 2013, sailing the team's turbo development boats, and working closely with the design team on shore. Together with the rest of the sailing team, he has already begun familiarizing himself with the venue in New York, and the team's AC45F playbook.

The pocket rocket 'Erivale III' is now available. From the drawing board of the Ker Yacht Design team, the Ker 39 is hugely successful under IRC racing and has been from its inception with the 39 being one of the top performing boats in the UK for the past 5 years. 'Erivale III' has been professionally maintained since new so presents very well. Currently based in Cowes she can be viewed or test sailed at any time.

"Sonic Astro" is a fourth generation TP52. She was designed in 2006 after extensive towing-tank testing and with the original TP52 ideas in mind; to be extremely fast around the cans but to race safely offshore. In her two MedCup seasons she raced without incident and showed good speeds inshore and offshore. Due to her very high spec carbon prepreg construction she started her second life as an IRC race yacht without problems and won almost all the races she has done since. She is now for sale with new sails in 2012 and offers her new owners lots of potential for a very succesful IRC campaign. Appointments to view through Ancasta's Head Office in Port Hamble.

The Last Word
I like the dreams of the future better than the history of the past. -- Thomas Jefferson