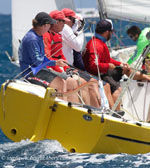 St. Thomas, US Virgin Islands: The real story of the 43rd St. Thomas International Regatta (STIR) was wind. Lots of it. Gusts blustered over 30 knots all three days with 6 to 8 foot seas. Yet combine these conditions with 80-degree weather, bright sun and bathwater warm turquoise seas and it's a recipe that racers on the 67 entered boats relished.

Chief among these happy sailors was 2015 Rolex Yachtsman of the Year, Steve Benjamin. Benjamin's TP 52, Spookie, not only won the tune-up Round the Rocks Race on Thursday, but didn't break from his bullet only streak in the CSA (Caribbean Sailing Association) Spinnaker Racing I Class during the three days of the STIR.

"The second race today in north Pillsbury Sound today was extraordinary," says Benjamin, from Norwalk, CT. "It was a challenge from the crew in the strong wing, shifts, waves and currents that thoroughly tested us. Overall, we had a marvelous experience and highly recommend this regatta to everyone."

Never Ever Ever Let Up
During the lead up to the Olympics when you are in a dominant position it is important to keep the pressure on your rivals imposing your advantage on each and every occasion. That was evident on the first day of the Trofeo Princesa Sofia IBEROSTAR where France's four-times Nacra 17 world champions Billy Besson and Marie Riou composed a perfect opening day with three back-to back race wins in brisk, near ideal Bay of Palma conditions.

Last month in Clearwater, Florida the duo won the title with a day to spare, once again, and today as the key European season opening regatta started Besson and Riou were seemingly unstoppable in their preferred conditons.

The Finn class is at 90 per proof. World Champion Giles Scott (GBR) has not raced since November last year when he clinched the Gold Cup in New Zealand but opened today with a 1,4. Newly crowned European Champion PJ Postma (NED) lead both breezy, grunty Finn races but young Jake Lilley, chasing Australian selection took the first bullet of the regatta and Scott who hit the front on the first downwind won the second race:

In the Men's 470 Class the American pair Stu McNay and Dave Hughes, who won in Miami, and Aussies Mathew Belcher and Will Ryan monpolised the winning guns across the two qualifying fleets numbering 79 entries in total.

In the women's 470 fleet, the British Sailing Team's Amy Seabright and Anna Carpenter who won the training regatta here and are training partners to Olympic silver medallists Hannah Mills and Saskia Clark share the early lead:

Top three after 1 day of racing: 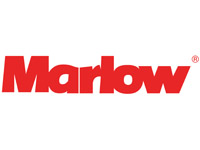 2015 saw a major change for the Marlow Ropes Leisure Marine team when our longest standing member of staff, Marilyn Kitcher retired after 47 years! With this departure came change and we have taken the opportunity to expand and restructure our team.

Forrest has been with Marlow USA since the beginning in January 2013, having previously sold our products for Bainbridge International, where he was a sales executive for 11 years. A proponent of the tenet that “we sell to our friends”, Forrest spends a great deal of time immersed in the sailing community in the US, developing relationships and drawing on lessons learned from Marlow projects worldwide to provide our US customers with the most up-to-date rigging materials and techniques available. As well as managing the Yachting and Industrial markets Forrest is responsible for keeping our Grand Prix and OEM customers happy on a day-to-day basis.

Sam joined Marlow USA in July 2015 with an extensive background in US Marine Market, having spent 10 years at Contender Sailcloth building industry relationships. He is an accomplished sailor, and competes in everything from team racing to offshore distance racing, having most recently won this year’s Marion – Bermuda Race. His focus is on sales derived from customer service and new business development in the US Marine market along with managing the US Leisure Marine Sales team and our outside reps. The addition of Sam ensures our customers will have an uninterrupted flow of advice as we grow in the US. 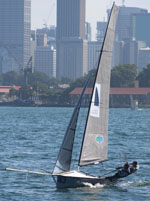 With five straight bullets, the Sydney Sailmakers crew of Nick Press and Andrew Hay has decisively collected the 12 Foot Skiff Australian Championship title, sponsored by Captain Morgan and sailed on Sydney Harbour over the Easter weekend in light and variable conditions.

Lincoln Crowne, crewed by Jonathon Temple and Richard Jones, filled out the top three, the only one to nearly rob Sydney Sailmakers of a faultless scorecard.

Defending champion skipper, Brett Hobson, was ashore awaiting the birth of his second child, so left Geotherm in the capable hands of James Francis and Hobson's usual crew, Billy Lusty, who sailed Geotherm to fifth overall. It left the path somewhat clear for Press/Hay, as the two crews are highly competitive and push each other to the limit.

Racing was abandoned on the opening day, Good Friday', which was not so good for sailing - it was extremely light and shifty, so the 24 crews were raging to get on the water on Saturday when the two planned races were sailed in east and north-easterly winds.

Sunday's two races were held in easterly winds of up to 12 knots and things were livelier in terms of closer finishes.

The winners of the Sydney Flying Squadron hosted Australian Championship will now have their names engraved on the Norman Booth Trophy, while the handicap winners' names will be added to the Colin Clark Memorial Trophy. -- Di Pearson   Top five scratch results: 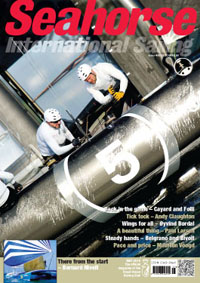 More boats than time
However big the base, and the staff, and the budget, in the final analysis the America's Cup comes down to time. Andy Claughton

Worth getting right
Persico Marine are building the latest maxi to the WallyCento rule... with help from Pinifarina. Martin Bivoit and Giovanni Belgrano have been charged with keeping it in one piece

World Sailing
Work in progress and the clock's ticking. Sarah Gosling tours the beaches of Rio

Ian Bruce once said he stumbled into sailing, but he left an indelible mark on the sport as inventor of the Laser - one of the world's most popular sailboats.

The longtime Dorval resident died last Monday in Hamilton, Ont., after a battle with cancer. He was 82.

"He changed the face of sailing in the world," said Peter Bjorn, a longtime sailing partner, business partner and friend.

A 63-year member of the Royal St. Lawrence Yacht Club who lived just off the club's grounds, Bruce was a passionate and accomplished sailor who won many regatta titles and represented Canada twice in the Olympics, in 1960 and 1972.

But he is best known for innovating a new class of small sailing dinghies, designed for the mass market but fast enough to interest the world's top sailors.

The Laser was chosen as an Olympic class in 1993 and was first sailed in the 1996 Olympics.

In 1969, Bruce, an industrial designer at Alcan and co-owner of a small business manufacturing high-end sailboats, came up with the idea of a single-handed dinghy that would be small and light enough to fit on a car's roof rack.

In a 2013 interview with Sail World, Bruce Kirby, a former journalist at the Montreal Star and Olympic sailor who designed the Laser, said Bruce proposed the idea over the phone in October 1969.

"While we were talking on the phone, I was doing a sketch on a piece of yellow legal paper," Kirby recalled. The sketch later became known as the "million-dollar doodle."

Also involved in the project was the late sailmaker and former Olympic sailor Hans Fogh, along with others, including Bjorn.

A celebration of his life will be held May 7 from 4 to 7 p.m. at the Royal St. Lawrence Yacht Club, 1350 Lakeshore Rd. in Dorval. In lieu of flowers, the family requests that people make donations to a charity of their choice or encourage someone to learn to sail. -- Jason Madger in the Montreal Gazette

* From Alistair Skinner: I am perhaps not the best qualified person to write a piece about Ed Dubois but I knew him a little, met him a few times and own one of his babies and as I write this I quite literally have tears in my eyes.

I opened the email from duboisyachts expecting to see renderings of the latest design or a brokerage listing and was quite literally left in shock, I had no idea Ed had been ill.

A long time ago in Scotland I sailed one of 'his'. A Westerly Griffon which sailed far too well to be a cruiser and we did things with that boat 'Shiron' that most people wouldn't dream of. I remember crossing a finish line on the Forth rolling from side to side in a high end of a 5 when many people left their spinnaker in the turtle.

We crossed the line to the sound of a toot accompanied by a round of applause from those on the committee boat. She was a boat that looked after you. Ed had been responsible for quite a number of the Westerly line and they all had excellent sailing qualities.

Hong Kong played quite a part in Ed's earlier career as after a China Sea Race where one of his boats was sold 'as is' the owner commissioned a new boat. That boat was Police Car which became a member of the Australian Team. In the Admiral's Cup of that year, Hong Kong had their best ever result with two of the three boat team Ed Dubois designs and Police Car was herself, the star of the show.

My own relationship with Ed blossomed when I discovered Design 55 in a shed in Hong Kong. 95% built in 1982 but never launched the hole hadn't even been cut in the deck for the keel stepped mast. She had sat in the corner of a shed under a tarp for 25 years. Naturally I needed her plans to cut in the right place and it was obvious from Ed's return mail the delight in one of his lost children re-surfacing.

I brought her to Shanghai, tricked her out and she became 'Bird of Prey' where she is virtually undefeated. She was due to race today in the China (Shanghai) International Boat Show Charity Regatta. Out of respect for her creator she will not be on the start line. My heart wouldn't be in it.

I was due to call Ed in the next couple of days as he was nominated as "Best Yacht Designer" in the Asian Marine & Boating Awards. Sadly that is a call I, now, shan't be making.

Sail on Sir! One of the truly nice people has left us far too early. You will be sorely missed.

Built by Premier Composites, Dubai and designed by Shaun Carkeek, the C60 is a new breed of ultra-light displacement raceboat. Suited to both the offshore classics like the Fastnet and grand prix inshore racing

The Last Word
I enjoy inventing things out of fun. After all, life is a game, not a career. -- Brion Gysin