Rolex Farr 40 World Championship
After two days and six races at the 2016 Rolex Farr 40 World Championship hosted by the Royal Sydney Yacht Squadron in Sydney Australia, Alex Roeper's Plenty from USA sits atop the leaderboard with a fragile one-point margin over fellow Americans Helmut and Evan Jahn's Flash Gordon. There have been five different race winners so far, and no one has shown signs of building a strong lead. With two days remaining and a possible five further races there remains plenty to play for in this typically tightly contested series.

This is the third time the world championship has been held in Sydney and it has always proved an excellent venue. Conditions and excitement on the racecourse fulfil expectations, and in this 2016 is proving no exception.

Today (Wednesday, 17 February) saw the battle move inside the Heads. Conditions were in complete contrast to the previous day's offering: flat water - albeit churned by the traffic in this busy port - and lighter winds that topped out at around 17 knots, still from the south, and gradually softened.

Racing at the Rolex Farr 40 Worlds continues tomorrow (Thursday 18 February) and finishes on Friday (19 February) when the winner will be awarded the world championship trophy and a Rolex Yacht-Master timepiece. Top 5 Provisional Results After Day 2

Etchells Worlds At Cowes Rises From The Ashes
Despite a fire at a boatyard in West Cowes on the Isle of Wight, which destroyed 17 Etchells keelboats. David Franks, the Cowes Etchells fleet captain, reports that the class had rallied after the incident and that the Etchells World Championship, to be held in Cowes this summer, will be unaffected and is set for an impressive turnout of world class sailors from all over the world.

At least 65 boats are expected with 40 boats from overseas. Racing at the world championship will include a galaxy of stars including the current world champion, Skip Dieball & Jon McClean.

The 2016 Etchells World Championship, hosted by the Royal London Yacht Club, will be held in Cowes from 5-12 September 2016. -- Gerald New in SailWeb.co.uk 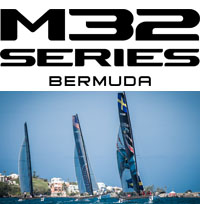 The M32 Series Bermuda heads over to Bermuda for Event #2 on the iconic waters of the 'Great Sound' from 19-21 February 2016. Follow all the action as private owners and teams race on the very same race course as the 35th edition of the America's Cup.

For more information about the M32 Series Bermuda

Stay up to date - https://www.facebook.com/M32Series/

Junior Offshore Group 2016 Season
JOG open their 2016 race season with the traditional dash across the Channel to Cherbourg on Good Friday, 25th March. Open to fully crewed or double-handed entries in IRC Classes 3, 4, 5 & 6 it's the perfect way to blow away the winter lay-up cobwebs and get the sailing season underway.

JOG are running a full race programme of 17 races in 2016 split across inshore/coastal passage races & longer offshore/cross-Channel races. In addition to the usual south coast and Channel ports, a new destination is on the calendar in the offshore programme: The JOG 65th Anniversary Roscoff Race, (supported by Clanfield Properties) will start early on Saturday 28th May and will be followed up by two "JOG on just for fun" races to make the trip home more interesting for those who want to extend their bank holiday weekend, taking in Treguier & St Peter Port.

All races are open to non-members and members alike. -- Peter Chartres

For many crews, the Easter Challenge marks a key date in their diary, by which their boat must be recommissioned and back in the water ready for the new sailing season. To help crews get up to speed again as quickly as possible, particularly those looking to enter this year's Brewin Dolphin Commodores' Cup, the RORC has set up the Easter Challenge as a start of season training regatta.

The RORC ropes in some of the world's best to carry out this tuition. The coaching team will once again be led by Jim Saltonstall, MBE. Saltonstall has played a pivotal role in the success of most of Britain's leading Olympic sailors including Sir Ben Ainslie, Chris Draper, Iain Percy, Nick Rogers and the RORC's own Principle Race Officer, Stuart Childerley.

He will be supported by the RORC's CEO Eddie Warden Owen, himself a former America's Cup coach with Team New Zealand and latterly with the Spanish Desafio Espanol team in Valencia in 2007.

Once again integral to the coaching will be North U. Regatta Services, with specialists Chuck Allen and Andreas Josenhans flying across to the UK especially for the regatta. Both are well known sailors and highly experienced coaches and sailing performance analysts in the USA.

Inshore racing at the Easter Challenge is scheduled to run from the Friday morning (25th March) until Easter Sunday early afternoon, allowing teams to get home for the evening, laden with the chocolate prizes they will have won. -- James Boyd

New Under 23 Finn Sailor Funding
The British Finn Association has recently introduced a funding scheme for the top two sailors from the 2015 Traveller's Series to attend the Silver Cup, (the U23 World Championships) and the Junior European Championships. The International Finn Class has recently increased the age limit to Under 23 for the Silver Cup, to unify the class with other Olympic classes and sports.

"Among the Olympic sailing classes, the 470, the 49er and the FX have also recently adopted U23 for their Junior worlds and this would allow us to run combined events in the future," Corinne Mckenzie, Finn Class Executive Director, explained.

The 2016 U23 Finn World Championship for the Jorg Bruder Trophy, known as the 'Silver Cup', will take place from the 3-9 July 2016 in Aarhus, Denmark - the same venue as the 2018 World Sailing Championships.

The grants of £500 are designed to help attract younger sailors to the class, particularly those who miss out on fast tracking into the RYA Podium Potential squad. We are also working with the RYA to create a BFA youth squad, to help develop the next generation of top British Finn sailors. Britain has won Gold at the last 4 Olympic Games and the Finn Gold Cup (world championships) an incredible 10 times since 2002.

The grants will be funded directly from the sale of personal sail numbers and is supported by Sir Ben Ainslie who has kindly released his iconic sail number GBR-3 to be sold by auction to raise money for the fund. -- John Heyes 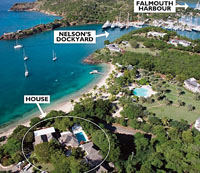 Coming to Antigua in April, have you got your shore based accommodation sorted?

FAST40+ Race Circuit
With only 40 days until the first FAST40+ Race Start, Bow Numbers have been drawn.

The first five teams to complete their entries for the season were allowed to choose their own number, with Tokoloshe selecting #13. Let's hope this proves a lucky number for this very competitive team.

Plans for racing are well underway and the majority of the fleet are finishing re-fit and aiming to start their training early in March. Ten Teams have entered for the RORC Easter Challenge, which will act as a warm up regatta ahead of the main season.

2016 RS:X Worlds Attracts Top Talent To Eilat, Israel
Taking place from 20-27 February and hosted at Eilat Sailing Center, the Worlds will be contested over 5 race days, with the 13 race series unfolding on the stunning waters of the Red Sea. The World Championships will be a platform for athletes to test themselves on a big stage, before stepping up to the biggest challenge of all at the Rio 2016 Olympic Games.

Whilst many athletes are already confirmed to represent their nation on the Olympic startling line, for others it is still all about securing that critical national selection nod for the final guarantee of a spot in Rio, and their performance at the Worlds could make all the difference.

Twenty-three nations are so far represented in the provisional entry lists, with plenty of big players in both the Men and Women fleets, including reigning Olympic Champions, World Champions and top ranked athletes.

This close to the 2016 Olympic Games, every event is a dress rehearsal, but by the time the first race at the RS:X Worlds kicks off on Monday 22 February, there will only be 166 days to go until the Opening Ceremony in Rio. So the Championship will also be one of the last building blocks in preparation, where athletes can measure themselves against their main contenders to assess strengths and weaknesses.

Windsurfing is one of Israel's most popular watersports, and the nation's athletes have achieved global acclaim on Olympic and World Championship stages over many years. Hopes are their sailors will thrive on home waters.

Landmark 10th Season With New Boats, Teams And Venues
The 2016 Extreme Sailing Series was officially launched at the Dubai International Marine Club on 10 February with a full line-up of eight world-class teams, from eight nations confirmed.

As the Series heads into its tenth year, some of the world's top sailors are preparing to take-off on a new fleet of GC32 catamarans, as the Series welcomes a new generation of foiling boats. Touching down in eight iconic urban city centres, the Portuguese capital Lisbon makes its debut as a new Stadium Sailing racecourse and looks set to be a venue highlight for 2016. Alongside the Portuguese city will be seven other tried-and-tested city stadium settings, that have attracted more than one million spectators to the Extreme Sailing Series over the last nine years.

On the grid for the new season are 2015 runners-up SAP Extreme Sailing Team co-skippered for a fifth year by Jes Gram-Hansen and Rasmus Køstner from Denmark, who have boosted their on-board talent with Italian Pierluigi De Felice, a multiple World Champion and three-times America's Cup sailor.

2008 and 2014 Extreme Sailing Series champions from Switzerland and two-time winners of the America's Cup Alinghi will return to the circuit armed with foiling expertise after coming second in the 2015 GC32 Great Cup. Team principal Ernesto Bertarelli will be sharing helming duties throughout the season with young Swiss talent Arnaud Psarofaghis (SUI).

Sparkling example of the X-50, a competent cruising yacht and also a good IRC contender, a true master of all trades.

The Marten 49 is intended for the owner who wishes to combine the sparkle of a day sailing yacht with the ability to make fast comfortable blue water passages. It is designed to be a superb family cruising yacht, a top performer at regattas and to be a fast and comfortable passage maker for world cruising. It is differentiated from all others by its detailed design, construction methods and materials that combine to provide superb performance and unrivalled functionality.

The Last Word
People have moved beyond apathy, beyond skepticism into deep cynicism. -- Elliot Richardson