Lang Walker and the Kokomo crew put in a solid performance scoring a 2-3-9 landing them in fifth place at the end of day one.

Royal Sydney Yacht Squadron's PRO Rob Ridley ran the first three races offshore on the Macquarie Circle, approximately 2 miles east of Macquarie Lighthouse in 16-20 knots. "It was a challenging day. Course 4 was set for all three races and we saw a lot of currents creating a short sharp set, which was our biggest challenge today."

The appliancesonline.co.au team of David Witt, Tom Clout and Tom Anderson dad to produce their very best form to take out Race 3 of the 2016 JJ Giltinan 18ft Skiff Championship on Sydney Harbour today.

In a highly spectacular and entertaining race in 20+knots of southerly wind, the heavy weather specialists had to come from behind after the first three legs of the course before finally taking the victory by 43s.

The points are well spread at the moment and the contest is certain to be one of the most hard fought before the final race takes place on the harbour next Sunday.

With a 20+knot southerly already blowing before the race, rig choice was made easy with all teams selecting the smaller #2 rig for the day.

A few teams, including the Gotta Love It 7 team, even went further and put a reef into the mainsail.

The Next Generation 36' Sport Cruising Yacht From J/Boats

The J/112E is the newest addition to J/Boats' "E" Series of versatile sport cruising yachts. The "E" is for elegance and evolution in performance cruising design. Why settle for anything less than sailing where and when you want to in comfort, style and speed?

36 feet is a magic size in the J/Boats line-up. With a spacious two-cabin accommodation plan and a comfortable, ergonomic cockpit, the all-new J/112E is as well suited for the annual cruise as she is short-handing through rough weather or sprinting across the finish line.

To learn about the entire E range please visit www.jboats.com

The Nanny Cay Cup, Round Tortola has become not only an incredible scenic adventure around the island, it is also the Nanny Cay Challenge for the fastest mono and catamaran record around Tortola.

If the forecast looks good, there's a chance for entrants to throw down the gauntlet in the hope of smashing the existing record for the Nanny Cay Challenge by setting a new elapsed time as they race round the Island of Tortola, starting and finishing at Nanny Cay.

America's Cup Spending: Just Over $14 Million
The (Bermuda) Government has spent just over $14 million on the America's Cup as of December 2015, the House of Assembly heard on Friday, with the figures being provided by Minister of Economic Development Dr Grant Gibbons following Parliamentary Questions from MP Wayne Furbert.

According to the Potential Economic Impact [PEI] assessment previously released by the ACBDA, the direct spending on-island for the America's Cup is estimated to be "in the region of approximately $250 million."

Forming Foundations Of America's Cup Village
A huge cargo of steel piles has been unloaded in (Bermuda's) Dockyard as part of the South Basin project.

The piles will be drilled into the seabed to secure the reclaimed land that will form the foundations of the America's Cup village.

The steelwork arrived in the West End last week on board the BBC Tennessee from Baltimore in the United States. Project managers expect to start driving the piles into the earth within the next couple of weeks.

Andrew Dias, the general manager of the West End Development Corporation, told The Royal Gazette that the project was "progressing well" and remained on time and on budget. -- Simon Jones in The Royal Gazette

This year the 8th edition of the RORC Caribbean 600 has an entry list as glamorous as any Grand Prix event anywhere. World class teams are already gathering in Antigua and the buzz around the dock is as much to do with the Antigua 360 Race as much as the offshore event. Entry interest has been given by the following boats already in Antigua

Unusually for an event of this calibre there is NO ENTRY FEE!! The event is being managed and run by Stan Pearson and his SYCA team who run the annual Superyacht event in Antigua every January.

London's Alexandra Palace will once again be transformed into a dinghy sailor's heaven as the annual show provides the perfect start to the dinghy sailing season, with talks and coaching sessions and all the latest boats and gear to get you sailing faster.

Another Reason To Love Cowes 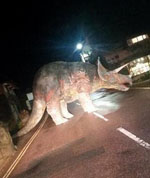 Last Friday, a massive statue of the cretaceous dinosaur was moved by pranksters into the middle of a road in the village of Godshill on the Isle of Wight in England.

"That priceless moment when you're driving home from work at 3am and the road is blocked by a 20ft Triceratops!!! ‪#‎godblessbeer‬ ‪#‎someoneneedsamedal‬," Chris Hollingshead, who snapped the photo, wrote in a Facebook post.

Hollingshead said he commutes through Godshill so he immediately recognized the triceratops, which is known locally as Godshilla.

"Shock turned to amusement at what was actually in front of me, but after taking a quick pic I did speak to a police officer," he said.

Martin Simpson, who owns both Godshilla and Island Gems, a shop that sells gems and fossils, said it must've taken five people to move the triceratops statue.

Industry News
The Volvo Ocean Race has appointed North Sails to be the exclusive Official Supplier of sails to the Volvo Ocean 65 one-design fleet in 2017-18.

Nick Bice, who heads up The Boatyard maintenance centre at the Volvo Ocean Race, explained that the success of North Sails in renewing their partnership with offshore sailing's leading event was no foregone conclusion.

"North Sails was chosen against a lot of different criteria and not necessarily because of a long history in ocean racing and the Volvo Ocean Race," he said.

"Many elements have contributed to the final decision, including the simple fact that the North Sails 3DiTM product is very good. The company has a strong commitment to the next edition of the race, not only from a product but also a personnel point of view."

The next step is to finalize designs for the Volvo Ocean 65 sail wardrobe, which will be carried out once the 2017-18 route is confirmed by mid-2016. After that comes the manufacturing process, followed by the delivery of the sails to the 13th edition teams in April 2017.

Crewsaver has announced its continued partnership with Warsash Sailing Club to support the Warsash Spring Series and Championship for a second year.

The Spring Series will be running from the 13th March to the 24th April 2016 and looks to attract 1200 sailors.

To enter the Crewsaver Warsash Spring Series and Championship go to www.warsashspringseries.org.uk

Training days and racing is held in the iconic Victoria Harbour, which is a spectacular venue for the sailors and spectators alike.

The Series had a distinctively Asian 'flavour' in 2015, with current world #13 Maximillan Soh from Singapore defeating Jeremy Koo from Malaysia in the Final.

Thanks to Marine Super Store's sponsorship, competitors will be able to enjoy a wonderful jazz band when they come off the water. Marine Super Store is also sponsoring the prizes for the regatta and is offering competitors the chance to take advantage of some exclusive in store discounts.

The Marine Industry Regatta takes place on Wednesday 1st June 2016, sailing out of Port Solent in Sunsail First 40's. The regatta is a great way to get together with other marine professionals and to entertain clients and staff. Charitable donations from the event will raise funds for the John Merricks Sailing Trust and the Andrew Simpson Sailing Foundation, another great reason to get involved.

The first Poole Harbour Boat Show was held in 2015 and proved successful enough that organisers Poole Harbour Commissioners moved to continue the show through at least 2017 and to expand it to three days.

The show, now called The Pool Harbour Boat Show in association with Sunseeker, will run from May 20-22, 2016.

The boat show's organisers hope to build on last year's attendance of 15,000 and are building up to host the 2017 European Maritime Day. The boat show dates were planned around the event, scheduled for 20 May 2017.

* From Philippe Serenon, Past UNCL President: I totally agree with Skip Novak's words and am convinced that the format of the Cup will not help building its legend.

Technology and TV is as light as a puddle of oil on the ocean which is easily dispersed. But a wing underwater with its tons of lead leaves a trace in the waves ...

TRITIUM is a modified ORMA Trimaran - stretched to 73 feet. Originally built by offshore veteran, Jean Le Cam, the boat was updated by Artemis Racing for testing of AC wing and dagger foils. The boat was heavily modified - with floats lengthened to 73 feet - the addition of hydraulically manipulated lifting "C" foils, hydraulic canting rig, and cross beams reinforced, for the new loads.

TRITIUM competed in the 2013 Transpac, where it was First-to-Finish and had the fastest elapsed time. Currently located in California - its design enhancements produce one of the fastest offshore vessels in the Pacific.

The Carkeek 47 is a thoroughbred new HPR-IRC racing yacht, created with similar objectives to the C40 with HPR-driven performance both inshore and offshore - utilising no-compromise grand prix construction and technology throughout

Engine refitted in 2011 and in good working condition. Ovington Marine built. She comes with a trailer.

The Last Word
No nation ancient or modern ever lost the liberty of freely speaking, writing, or publishing their sentiments, but forthwith lost their liberty in general and became slaves. -- John Peter Zenger