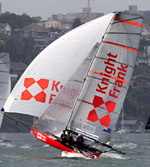 Sydney Harbour: After a lengthy delay to the start, Race 2 of the 2016 JJ Giltinan 18ft Skiff Championship on Sydney Harbour today provided spectators with some great action and a wonderful exhibition of heavy weather sailing by the winning crew on Appliancesonline.com.au.

David Witt, Tom Clout and Tom Anderson are renowned for their ability in strong winds and with 20+knots and big rigs aloft the team showed why they have that tag.

While the appliancesonline team were brilliant, they had a lot of trouble trying to shake off the challenge of the Smeg team (Lee Knapton, Ricky Bridge, Mike McKensey), who stayed in the challenge until the very end.

At the finish, appliancesonline.com.au took the race by 1m2s from Smeg, with Thurlow Fisher Lawyers (Michael Coxon, Trent Barnabas, Dave O'Connor) a further 1m35s back in third place.

Even previous JJ winners Seve Jarvin and John Winning couldn't escape the elements and capsized in Rose Bay on the sixth leg of the course.

Race 3 of the 2016 JJ Giltinan Championship will be sailed on Tuesday (16 February).

The Spanish team of Echegoyen and Betanzos went into the final day's racing with an incredible scoreline from the previous two days of competition, having won four of the last six races and coming 2nd and 3rd in the other two. However the Spanish looked vulnerable in the flat water and lighter breezes wafting off Clearwater Beach, coming 10th and 17th and allowing the gap to the chasing teams to close to just 5 points.

Pete Burling and Blair Tuke wrapped up their fourth world title with a Gold Fleet race to spare, and ended up winning by a massive 41 points. While the Medal Race was a formality for the victorious Kiwis, there was a very close battle for the silver and bronze.

In the Nacra 17 World Championships, the Unbeatable Billy Besson and Marie Riou chose to sail the final race of the series even though their point spread was enough to call it a week. 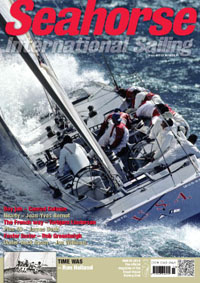 Sailor of the Month
Largely unsung but brilliantly deserving...

Primo Cup: An Event Beyond Borders

Monaco: Sunday 14th February 2016 - With 14 nationalities, 800 sailors and more than 150 boats divided into nine classes the Primo Cup - Trophee Credit Suisse's reputation has gone beyond borders to establish itself as a classic on the international calendar for more than 30 years. The six days of racing organised over two consecutive weekends once again attracted a strong fleet.

Next year's Primo Cup: Benefiting from a new building with superb facilities for hosting competitors, the Yacht Club de Monaco has decided to change the Primo Cup - Trophee Credit Suisse formula, by bringing all classes together for one weekend, starting 2017. The 33rd edition will be from 2nd to 5th February 2017: a spectacle guaranteed with 150+ boats on one race area!

Plenty led the three-day regatta from day one and today, in perfect 12-14 knot northeast conditions on the offshore Manly Circle, sealed victory by winning the first two races before finishing fourth in the last race, recovering after being buried in the pack on the starting line, for 24 overall points.

Winner of the Corinthian division, which limits the professional members of the crew to two, compared to four in the open division and has tighter limits on new sail purchases, was another Sydney boat, Jeff Carter's Edake, which finished eighth on the overall scoreboard. -- Bob Ross

Bermuda To Host Tall Ships Race In 2017
Bermuda is to host an international tall ships festival next year, according to the group Tall Ships Bermuda.

The organisation issued a statement this afternoon confirming that Bermuda would serve as the host port for the Rendez-Vous 2017 Tall Ships Regatta, RDV2017,

The RDV2017 is a transatlantic race covering 7,000 nautical miles, including a circumnavigation of the North Atlantic Ocean that includes six countries.

Bermuda will become the centre of maritime attraction during early June 2017 with the 35th America's Cup Races, J-Class yacht regatta and the Tall Ships festival and races occurring at the same time.

"The world's Tall Ship Fleet has never before graced the same port at the same time as an America's Cup event," said John Wadson, chairman of Tall Ships Bermuda.

"Bermuda will be making history by playing host to a combined maritime event of epic proportions."

America's Cup Lawsuit Dismissed
San Francisco, California, USA: A federal judge dismissed without prejudice an America's Cup sailor's claim that Oracle Team USA breached his contract by blaming him for a crewmate's mistake, though the judge found it "difficult to imagine" how the sailor could successfully amend his lawsuit.

Mitchell claimed that Oracle blamed him for nonparty Simeon Tienpont's violation of the rules: adding weight to a race boat, in the form of resin.

Mitchell claimed "that the team's failure to suspend or fire Tienpont caused Mitchell to become a scapegoat in disciplinary proceedings before the America's Cup jury," Chhabria wrote in his summary of the case. "In other words, Mitchell seems to believe that if the Oracle Team had suspended or fired Tienpont, the America's Cup jury would somehow have treated Mitchell differently during disciplinary proceedings.

"But according to the allegations in Mitchell's own complaint, as well as the exhibits he attaches to the complaint, the America's Cup jury was aware that Tienpont added resin to the kingpost. Therefore, the Oracle Team's alleged failure to suspend or fire Tienpont could not have caused Mitchell's alleged injury."

Ireland's Fireball Dinghy Class Provided The Secret Of Eternal Youth
Most sailing folk still think of the Fireball as a fresh and unique off-the-wall sailing phenomenon, a crazy European take on the skimming-dish scows of the lakes of America's mid-West. And we think of these very special racing dinghies as being something as new as tomorrow, ingenious boats for ingenious owners who like to do all sorts of personal tunings and tweaks to their pride-and-joy. So it brings us up short to find them celebrating their Golden Jubilee. W M Nixon gives his own take on the Former Fireball Fanatics.

the Fireball was and is a bit of a cult thing. She was designed by Peter Milne, who at the time of her creation was working on the drawings for the latest Donald Campbell world water speed record challenger. In the midst of such a hothouse of technology and massive expenditure, it seemed like a breath of fresh air to take a little time out to create a boat which reduced sailing to its absolute essentials, and he did it so well that Peter Milne thereafter never quite matched this one divine inspiration.

And it was truly inspirational. After all, who would have thought that a minimalist boat, with just about zero freeboard and skinny with it, and with her slim hull further reduced in volume by having a cut-off pram bow, who could have thought it would be such a superb sailing machine when she'd a crew who gave total commitment to the concept and realized that the use of the trapeze was what Fireball sailing was all about?

A lot of history in Winkie Nixon's Sailing on Saturday:
afloat.ie/blogs/sailing-saturday-with-wm-nixon/

The app will feature all the latest news and information from the show which will take place at Alexandra Palace in London from 5-6 March.

It offers ticket information, opening times and all the show's news. As well as details of all the shows 150 exhibitors and a full list of the talks scheduled and workshops organised.

The app allows you to search for exhibitors using twelve categories to make it easier to navigate around and find the relevant services.

You can download the app free from the App store, Google Play or Amazon app store, or through the Yachts and Yachting website.

The Island Sailing Club is the source of the draft version of the Notice of Race for the 2016 J/111 World Championships this coming August in Cowes, England.

Maxi 79 Racer OURDREAM is a beautifully refitted maxi racing yacht that is easily sailed and perfect corporate or fun platform for both inshore and offshore regattas. Recent refit to a high standard means low running costs.

Great looking cruiser racer that is optimised for performance ocean crossings and which offers speed, comfort and epic passage times.

Engine refitted in 2011 and in good working condition. Ovington Marine built. She comes with a trailer.

The Last Word
In a big family the first child is kind of like the first pancake. If it's not perfect, that's okay, there are a lot more coming along. -- Antonin Scalia