With building pressure from a manageable 14 knots to a ripping 18+, the 49er fleet kicked off the first race of their 2016 Worlds. It was a dramatic start in tough conditions.

Over the course of the race, the pressure consistently mounted. The fleet just about made it across the finish line in one piece, it wasn't long before the race committee made the call to cancel the second start and send the racers in for an onshore postponement. The FX women waited on shore, keeping tabs on the building pressure. More and more, the women's FX fleet are erring on the side of caution, mindful of just how easy it is to break a mast in the shallow waters of Clearwater.

The opening to the channel leading into the racing area is particularly shallow, and shallow waters are the 49er's ultimate enemy. A total of six masts were snapped after today's boat-breaking conditions.

The women are scheduled to start racing at 11am tomorrow EST. Weather reports seem to appear a bit lighter for tomorrow, although it's unlikely we've seen the last of the big breeze this week.

Nacra 17:
It was a big and blustery opening race that kicked off the Nacra 17 World Championships today in Clearwater, Florida. The first race started in a fairly benign 11-12 knots, although the 43 crews probably had an inkling that something big was going to happen when the breeze suddenly shifted 30 or 40 degrees to the left with less than a minute to the start gun.

This played nicely into the hands of the defending World Champions Billy Besson and Marie Riou (FRA) who had been fighting hard for position at the left-hand of the start line. The French put the hammer down out of the line and tacked on to the layline for the top mark, and they never relinquished the lead.

Top three after one race:

She is now intent on raising the women's game in in EFG Sailing Arabia - The Tour and driving women's sailing forward in Oman and the GCC region. Her crew for the 2016 race, who have added Oman Airports Management Company to their growing list of backers, was carefully selected for that purpose, she explains.

"I have got a team together based on who I feel would be able to help the Omani girls develop whilst racing," said the former PE teacher who took part in the last Volvo Ocean Race on all women's boat Team SCA.

Some of her crew have sailed with the programme before including Ibtisam Al Salmi, one of the Middle East's first professional female sailors.

With their experience in the Volvo Ocean Race, Extreme Sailing Series, Olympics, Mini Transat and Artemis Academy, the girls on Oman Airports-Al Thuraya Women's Team make for a highly competitive and formidable team but the focus, says Caffari will be on developing skills rather than on results.

Marlow is pleased to launch Issue 3 of our Definitive Rope Guide for 2016!

As the name suggests, it is designed to be the definitive guide for your Leisure Marine rope requirements. From extreme sports and dinghies, to cruising, club racing and grand prix racers and even classics and superyachts.

It is a must for all trade customers and will help you find, specify and order the perfect ropes for your customer.

Organised by the Cercle Nautique Caledonien in conjunction with World Sailing, this Grade W event will welcome 16 skippers racing in Elliott 6m boats.

In its third year following the successful 2014 and 2015 editions, the World Championship is open to competitors under 23 years old on 31 December 2016.

The reason? This evening Hot August Night was declared the 2016 winner of the historic Sir Thomas Lipton Trophy.

Bellerive Yacht Club confirmed Hot August Night the 2016 winner of the ornate silver trophy after the Ben Lexcen-designed IOR 35 from the Derwent Sailing Squadron had won today's Division 2 with the lowest corrected time of all four divisions.

Sir Thomas Lipton, the Scottish merchant and creator of the Lipton Tea brand and many times luckless challenger for the America's Cup, originally donated the trophy to the Royal Yacht Club of Tasmania in 1914.

After being the perpetual trophy for the Tasmanian One Design class championships for many years, the RYCT re-dedicated it as a major yachting trophy for the Royal Hobart Regatta. -- Peter Campbell

RC44 Fleet Racing In Bermuda
The RC44 class will kick off its tenth championship series in the Great Sound, the venue for the 35th America's Cup, from March 2 to 6.

The annual tour, which features both fleet racing and match racing formats, is regarded as a "key series" to compete on in the international yacht racing circuit and features 12 teams, including Artemis Racing, Swedish challenger for the America's Cup.

"The boat was originally designed a 42-footer and it was when I was 44 years old, and so we decided to add another two feet to the boat to make it 44 to match my age," Coutts said.

The RC44 championship involves amateur and professional sailors who compete on monohull yachts at some of the most beautiful and diverse sailing venues around the world.

Win An Optimist Winner 3d Star Worth £3,500
GILL is giving away a top-of-the-range Optimist Winner 3D Star worth £3,500. Fully kitted-out with an Optimist trolley, an advanced rig and a cross cut sail - it's absolutely race-ready. We'll also supply the winner with up to £200 of Gill sailing gear.

The competition is open to UK residents only and closes at noon on Sunday 6th March. We'll announce the winner on the Gill stand at the RYA Suzuki Dinghy Show - location C30 - on the afternoon of Sunday 6th March.

To be in with a chance to win, answer a simple question and fill in your details at www.gillmarine.com/gb/win-a-boat

Sailing Yacht Research Foundation Names New Interim Executive Director
The Sailing Yacht Research Foundation (SYRF) announces that its Executive Director, Myles Cornwell, will be stepping down from his position to return to his profession as a naval architect. Under his direction, SYRF has gained tremendous momentum in its mission to support science in sailing, most notably by assisting in the completion of the landmark Wide-Light Project that explored the accuracy of CFD codes in modeling sailboat performance of modern planing hull designs, building the SYRF online Library of published research, and other important SYRF-supported projects.

The SYRF Board of Directors has made an interim appointment of Research Analyst McKenzie Wilson as Cornwell's successor, who has been with SYRF since September, 2015. Wilson brings both analytical and racing experience to the position. Before joining SYRF, Wilson was a cloud software consultant at Oracle, where she worked with corporate clients to improve data access and analysis.

Wilson is a graduate of Stanford University, and was an Academic All-American member of the varsity sailing team. Wilson is still actively involved in high performance handicap sailing across the US and internationally, competing in fleet and match racing, most recently having won the 2015 ISAF Nations Cup in Vladivostok, Russia.

Sailors will be able to count points from two further 200 points with their remaining tallies coming from 100 or 50 point regattas. 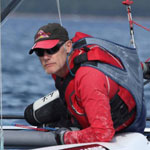 Murray John Philpott, 55, who is a celebrated Kiwi sailor, died in a glider crash near Twizel on Sunday.

The son of a pilot killed in a gliding crash was hoping his father landed in a remote area with no phone coverage when he was reported missing.

Hope turned to despair for Daniel Philpott and his family hours after they arrived in Omarama, Central Otago, on Sunday afternoon.

Murray John Philpott, 55 - a celebrated Kiwi sailor and Olympian - took off from Omarama on Saturday. Airfield officials reported him missing at 8.20pm after he failed to return.

An aerial search found his glider crashed in mountainous terrain in the Ben Ohau Range, northwest of Twizel, about 7pm on Sunday. It was about 50km from the airfield. He did not survive the crash.

Philpott had won multiple national A division catamaran titles and represented New Zealand on the world stage, including the 1992 Barcelona Olympics where he was a travelling reserve.

"He was an integral part of the New Zealand fleet, and his passion and enthusiasm for the class helped it get to where it is today.

"Whether it was on the water or land, Murray was a fun person to be around with and had the biggest smile. He was always the first person on the beach to assist others out of the water."

* From Sean Doyle: re The Last Word
Better to have, and not need, than to need, and not have. -- Franz Kafka

The local Irish version of the above is as follows:

Better looking at it... than for it!

* From David Aisher: re The Last Word