Finalists Announced For RYA Club Of The Year 2016
The winner of the prestigious RYA Club of the Year Award 2016 will be revealed at the RYA Suzuki Dinghy Show at Alexandra Palace on Saturday 05 March.

At 16:00 on the main stage, five clubs from across the UK will collect their finalist awards before the overall winner is revealed by RYA CEO Sarah Treseder.

The Royal Lymington Cup match race event was started in the mid-Seventies by a group led by Californian sailor and Lymington yacht builder Bill Green in open admiration for and imitation of the Long Beach YC's Congressional Cup, then well-established as a training patch for would-be America's Cup helmsmen and tacticians

The Cup trophy has been revived by the Royal Lymington Yacht Club (RLymYC) and will be presented to the winner of its new two-boat IRC inter-club team racing championship to be held in Christchurch Bay, UK on July 16/17, 2016. Clubs may be represented by two yachts within the IRC rating band of 0.95 to 1.10 TCF provided the nominated skippers are full members of the same club.

The first Club to enter this new IRC inter-club team racing championship is the Royal Thames Yacht Club, Knightsbridge, London, UK. Representing the Royal Thames, one of the most respected yacht clubs in the world will be, the powerful team of Peter Morton owner of JND35 Salvo - 2015 winner of both the IRC National Championships and Cowes Week Class 3 and David Franks, winner of Cowes Week 2015 Class 4 in his JPK 10.10, Strait Dealer.

The original competition attracted the best match racers of the day, among the winners of the Royal Lymington Cup were Thierry Peponnet, Marc Bouet, Sir Russell Coutts, Peter Isler Rod Davies, Chris Law, Chris Dickson, Peter Gilmour, Iain Murray and - the skipper whose name appears most often on the trophy - Harold Cudmore. But this time it will be the name of the winning Club that will be engraved on the trophy.

An entry from the Royal Yacht Squadron, Cowes, Isle of Wight, UK is anticipated soon from Adam Gosling (Yes! Corby 36).

An experienced, organized, detail-oriented Sail Designer to focus on production products for racing and cruising clients. Responsibilities include designing sails and preparing production details as well as providing support to local loft production and sales and service teams. This position will be required to coordinate details with members of the Global Sales Team to ensure finished products meet client needs and with the Production Department to ensure accurate and efficient construction. Sail Designers report to the VP of Design & Engineering.

The ideal candidate will be proficient in AutoCad and/or AutoSketch, have strong sailing skills, excellent internal and external customer service skills, and hands-on sailmaking experience. Minimum experience of five years in a similar role is required. Must be eligible to work in the United States. This person will train in Annapolis and will then work out of our loft in San Francisco.

Benito Mussolini Yacht Seized
Italian police have seized a yacht that once belonged to Italian dictator Benito Mussolini from a businessman they believe has links to organised crime.

The historic sailboat, called Fiamma Nera (Black Flame), was one of nearly €30m in assets taken from Italian entrepreneur Salvatore Squillante as part of an investigation into multiple individuals and companies.

Squillante, 68, allegedly purchased the yacht through one of the companies seized as part the "Mafia Capital" organised crime trials that began in Rome in November 2015.

Mussolini received the Fiamma Nera as a gift in the 1930s from a fascist supporter. The dictator sank the yacht intentionally to keep it out of German hands when Italy fell to the Nazis during World War II in 1943.

Fiamma Nera, originally named Konigin II, was eventually recovered, then restored and renamed Serenella. The vessel went through several owners and various name changes before allegedly being purchased through one of Squillante's companies seized by Italian police.

Fiamma Nera is said to be a Dutch yawl built by German shipyard Abeking and Rasmussen in 1912. 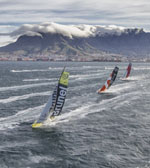 A spectacular photographic exhibition, 'Zoom In', depicting the contrast between aerial and onboard images shot by the professional photographers working on the last Volvo Ocean Race was launched today at the event's museum.

Some of the work has been recognised at international photography competitions and stands out as much for the quality and the advanced technology used, as the legendary sailing points around the world, such as Cape Horn, where they were shot.

"We have carefully selected this visual tribute to the incredible talent and dedication shown by the sailors, as well as the nine Onboard Reporters, and the team of around 25 race and stakeholder photographers who worked day and night to capture to perfection these unforgettable images," said Race CEO, Knut Frostad.

At today's launch of the exhibition, which was attended by Eva Montesinos, Alicante's Counsellor of Sports, Tourism and Beaches, head of the picture desk for the race, Carmen Hidalgo, described the difficult task of choosing 24 images from the 85,000 taken during the 2014-15 edition of the event, which finished last June.

Designed as a late season extravaganza of classic yachting, the Hamble Classics Regatta is set to welcome all styles of classic yachts, with racing formats to suit each type. Metre classes, Classic Racers and Cruisers, Spirit of Tradition yachts plus Old Gaffers and Dayboats will enjoy the superb facilities at one of the UK's top yacht clubs, with first class race management and a social programme to match.

"With so many beautiful classics residing in the river it's high time that Hamble hosted its own full-on classics regatta and I'm delighted that the Royal Southern has embraced the idea. For classic events to deliver maximum enjoyment for visitors it's important to match the sailing to the variety of boats entered."

Expressions of interest and preferences are most welcome during this planning stage by signing up here: eepurl.com/bJbAgD

The Notice of Race and entry details will be published in early March on the Royal Southern's website at www.royal-southern.co.uk

Even if you do find a pair that ticks every box, that looks good, grips well and keeps you warm, dry and comfortable, you'd still struggle to love a boot. Unless, of course, it's a Dubarry boot. Take the Ultima, with its blend of rich, supple leather and durable man-made fibres, the hi tech GORE-TEX liner that acts like an air conditioner, the award-winning grip of the sole - yes, those are all there, recognised benchmarks of quality, but what you can't see or touch or smell is the soul. Ultima boots have it in abundance because, like you, they change. They gain experience at sea and improve with age just as surely as you do. That's why sailors love them.

Ireland's Boats & People - How Do We Get Them Together?
National 18. Click on image to enlarge. 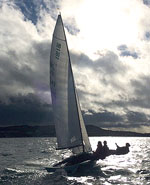 Getting three together to race a characterful boat like the National 18 with style - now that's something special, that really is a superb combination of people skills interacting with sailing talent. And it's a joy to behold. Yet anyone can see that for a complete beginner to sailing, this extraordinary silhouette of Tommy Dwyer's National 18 against the November sky above the Hill of Howth will have an otherworldly air about it - "That's not for me" is as likely a response as "Let's have a go at that".

Even those of us who have been in sailing for longer than we care to remember find the image decidedly thought-provoking, for we have some idea of what has been involved in creating the circumstances for this seemingly effortless balancing act, this lighter-than-air effect in the unlikely setting of a November afternoon.

Over the past year or so we have been recounting in Afloat,ie how the Cork Harbour National 18 Class, with very tangible backing from the Royal Cork Yacht Club, have been in the forefront of the development of the new ground-breaking Phil Morrison take on the long-established National 18, which is a developmental class which from time to time takes a leap in hull design, and moves forward in order to keep the spirit alive.

Matt Jerwood Undefeated After Day 1
Perth, Western Australia: Local skipper, Matt Jerwood, is top of the scoreboard after the first day of the Warren Jones International Youth Regatta, he and his Redline Racing Team are the only undefeated crew.

He was lucky to miss the very light and unreliable winds of the first two flights of the day, only getting onto the race course when the seabreeze had kicked in.

These difficult conditions at the beginning of the day were the undoing of both Sam Gilmour and Chris Steele, who lost early matches.

Sam Gilmour, who finished second in this event last year, lost his first and last races of the day, while Chris Steele, last year's winner, lost his first two matches, before the seabreeze came and rescued him.

Whilst Sam Gilmour holds onto second place on the scoreboard, three skippers are tied for third, with Steele sharing this position with Denmark's Joachim Aschenbrenner and Jordan Reece from Sydney's Royal Prince Alfred Yacht Club.

Once the legendary Fremantle Doctor seabreeze settled in at 18 to 20 knots the racing became fast and furious, with plenty of incidents to keep the umpires and the repair teams busy.

The event is organised by Swan River Sailing, and is sailed in their fleet of Foundation 36 yachts, and runs until Friday 5th February. -- John Roberson

Sailing World Cup Miami acted as an Olympic qualifier for all ten of the Olympic classes for North and South America with 22 nations across both regions sending sailors with one aim, to book their spot at Rio 2016.

The Last Word
A friend is someone who knows all about you and still loves you. -- Elbert Hubbard