Too Close To Call... The Pier View In Cowes And Plas Heli In Wales Share The Podium! 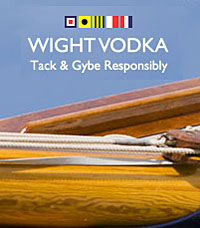 London, England: There are purists, and there are those that say "We should just do the right thing here." Well, this year's Favourite Yachting Bar Competition was as close as it gets amongst the top two haunts who drew a combined 26,000 votes and hence, we're 'doing the right thing' and announcing that the Pier View in Cowes on the Isle of Wight (finally!) and Plas Heli in Pwllheli, Wales, are sharing the podium for the World's Favourite Yachting Bar in 2015!

"Yes!!" said 'Pier View Sue' Wescomb, the publican of the Pier View in Cowes when Wight Vodka called her on New Year's Eve to give her the news. "Anyone who comes in from the Solent can expect a warm welcome, great food and drink, and very healthy banter here! We are so appreciative of our clientele and all of those who voted us as the best yachting bar in the world! Thanks also to the team at Wight Vodka and Scuttlebutt Europe; we will raise a glass to our win this evening and ring in the New Year!"

And for those who have not (yet) ventured to 52 Degrees North, 4 Degrees West, it's due time as this is home to the Welsh National Sailing Academy which just opened this past summer!

Plas Heli, with a brand new venue, brand new bar and restaurant, brand new pontoons, brand new deck and now, voted as the co-winner of 2015's Favourite Yachting Bar, will definitely see in the New Year with pride. Stephen Tudor, Secretary of Plas Heli, said "Wow! Since opening this summer and holding 7 international events with sailors from 44 countries, our nomination would not have happened! We're so proud to be voted in and indeed to share the podium with the fantastic Pier View!"

A Final Bullet For Lloyd Thornburg On New Years Eve In St Barth
Click on image for photo gallery. 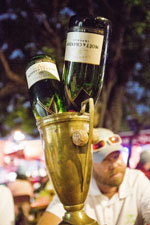 Lloyd Thornburg's MOD70 Phaedo has just broken another record by setting a new time of 1 hour and 5 minutes for rounding the island of St Barth today. With a maximum speed of 39 knots and rarely going below 30 knots downwind, Phaedo's circumnavigation won them the coveted cup for the St Barth New Years Eve Parade.

The accumulation of this year's results have placed Lloyd in the running for the prestigious Rolex Yachtsman of the year award.

After claiming line honours in the RORC Transatlantic Race earlier this month, the crew of Lloyd Thornburg's MOD 70 Phaedo3 have barely had a chance to catch their breath and reflect on their record-breaking season that started by setting a new RORC Caribbean 600 race record last February.

It has been a fantastic 2015 for sailing and for North Sails. After a stellar year of powering boats across the world, from the Volvo Ocean Race, the Rolex Sydney to Hobart and superyachts to dinghies, cruisers and classic yachts, the world's premier sailmaker continues to lead the way in performance, technology and durability.

And 2016 promises to be another big year. The Rio Olympics will undoubtedly dominate the headlines in the summer and the Vendee Globe will be the highlight of grand prix offshore racing - and the superyacht and One Designs calendars will continue to attract the best international sailors. And with a calendar now including Chicago, New York, Toulon, Muscat and Portsmouth, the America's Cup World Series looks set to deliver more excitement around the world this year.

Check in regularly with www.northsails.com for product updates, technology developments and latest news.

Sail The Wight First Entry Received
The first entry has been received 1hour 42 mins after the online entry system opened. Guy Shelbourne owner of Ava a Pegasa 800 was the first to enter the Sail the Wight 2016 the #raceforcharity. This is the 11th annual running of the race organised by East Cowes Sailing Club in association with the Westerly Owners Association and this time the tides dictate a start to the west.

New this year is the online entry form which Guy said "the form has made entering easier for competitors, we are really looking forward to the race, especially as I will be having as a crew member one of the Clipper round the world competitors."

The Notice of Race and the online entry page is now open for business, to find out more visit www.sailthewight.org.uk to download the NOR and all other documentation and help us raise money for AgeUKIW.

We are proud to support this year's charity AgeUK (IOW) www.ageuk.org.uk

The relaunch of the M32 cat with a new builder and all new class management has been accompanied by the exciting adoption of the class for the 2016 World Match Racing Tour...

On 11 December 2015, on the island of Hono near Gothenburg, a brand new, purpose-built facility was unveiled for mass-producing M32 catamarans. This gargantuan 3,050m2 climate-controlled hangar has been geared up to build 100 new M32s through 2016, with plans to further expand production the following year.

All this for a catamaran that co-designers Goran Marstrom and Kare Ljung originally envisaged as a toy for them to enjoy with a few friends. They imagined just four or five would ever be built and raced locally in Sweden. But Swedish entrepreneur Hakan Svensson decided the boat deserved a bigger audience, and the new facility is part of his vision for populating the planet with hundreds, even thousands, of M32s. That vision is M32 World.

Industry News
Henri Lloyd will be kitting out Phil and his team, for their Vendee Globe Energy Challenge, when Phil aims to skipper the first vessel to complete a 'no emissions' round the world circumnavigation race solo, non stop and unassisted.

Henri Lloyd will be working very closely with Phil, to select the correct attire for this historic race around the planet. Henri Lloyd's Ocean Pro range will play a big part in providing protection against the extreme elements that he will encounter. Built to withstand the worst conditions imaginable and perfected across five decades of product and fabric development, the garments will be designed and constructed to Phil's requirements and physique.

"Henri Lloyd is always inspired by solo, offshore sailors and it is a honour to support another pioneer of the ocean". Paul Strzelecki, Joint CEO Henri Lloyd.

Nottingham-based manufacturer of sailing clothing, Gill, has donated brand new kit worth in excess of £5,000 to the water section of Derby Mountain Rescue Team.

The rescue team had recently been deployed to Cumbria, where they, along with other teams from the Peak District Mountain Rescue Organisation, were helping victims of the severe flooding that struck the region in December. When photos of the team's water section were circulated on social media, it was mentioned that the team was using old, second-hand equipment.

After learning about their situation, and knowing how vital the service was to the region, Gill offered the rescue team 12 of its hardwearing Pro Drysuits, which provide complete protection against the wet and cold. They also donated a further 12 new buoyancy aids, which will assist members of the rescue team as well as those in need. The total retail value of the donation came to over £5,000.

Derby Mountain Rescue Team is a voluntary emergency service that attends callouts in response to requests from the Police. Made up of volunteers, the team is on call 24 hours a day. Their main function is the search and rescue of missing or injured people, principally in upland or mountainous areas.

Farr Yacht Design has designed a new rudder including construction details for the Beneteau First 40.7. This rudder will be a significant improvement for all existing Beneteau First 40.7s. It features a deeper blade span for improved efficiency, and a thinner, lower drag and more forgiving foil section for increased stall resistance. The use of carbon fiber for the rudder post construction results in a stiffer and stronger rudder for improved safety at sea, and a weight reduction near the stern of the boat.

The new rudder is designed for use within the existing bearings and quadrant. It will fit in place without requiring any major alterations to the boat. It will have little, if any, impact on a boat's handicap rating. The rudder is only suitable for the deep draft keel, but could be modified to suit the shallow draft keel.

Competition Composites Inc. (CCI) is the manufacturer for the new rudder design. CCI is a unique Canadian manufacturing business focused on designing and building composites products for various industries, especially for the boating market.

Discovery Yachts Limited, the British builder of luxury blue-water cruising yachts, has announced that Andrew Burrows has been appointed Managing Director, with a remit to oversee the company's next stage of growth. To coincide with Andrew's appointment, the founder of Discovery Yachts, John Charnley, is stepping down from his executive role to become non-executive Chairman.

Andrew, 47, brings a breadth and depth of commercial and technical experience to Discovery Yachts. He is a successful entrepreneur, an innovator and chartered Naval Architect and is returning to the yachting industry after a seven-year spell building his own successful VC-backed software and hardware technology business (i2O Water).

Discovery Yachts build award winning mono-hull and catamaran yachts ranging from 50 to 67 feet. It operates from a purpose-built design and manufacturing facility at Marchwood on the Southampton Water.

Future Fibres LLC, the US based arm of the Future Fibres rigging business, is pleased to announce its move of its US design office to central Newport, Rhode Island.

The new office is based in the recently renovated Mill Building on Thames St in downtown Newport - also home to the International Yacht Restoration School and North Sails.

For the US based team this is a great step closer to the action alongside the other leading Marine Businesses nearby.

Following the move Future Fibres continues to operate from two sites in Valencia, Spain and the new design office in Newport, Rhode Island

* From John Gullett, re: Alistair Skinner's letter from the Youth Worlds venue:

Two wrongs do not make a right.

I'd rather sail elsewhere than support those who would exclude competitors on the basis of their faith.

Then to sail would be tacit acceptance and support of morally repugnant acts.

Who can approve of your argument that the happiness of 425 be purchased at the price of a crime against two ? How far are you willing to go with this ?

Is there another, honorable alternative open to ISAF ?

Hull number 175 (2008). In immaculate condition with no defects and a high polished finish.

The Last Word
New Year's Resolution: To tolerate fools more gladly, provided this does not encourage them to take up more of my time. -- James Agate