Cast Off!
Jersey based British sailor Phil Sharp and crew finally cast off their docklines from Falmouth's Port Pendennis Marina setting off into a nasty, dirty December night to make the seven hour passage around to Land's End where they will start their bid to set an inaugural benchmark for sailing from Land's End to John O'Groats.

Their weather window is not ideal. They will start in strong winds and big, leftover seas for fast passage to the east of Ireland and now face a transition zone of light winds Saturday off Scotland's west coast which may slow them before they head round Cape Wrath, expecting to finish at John O'Groats early Monday morning.

After being on hold since last Friday waiting for big winds to clear the trio will still be seeking to outrun the next big Atlantic winter storm which will hit the top of Scotland Monday and Tuesday. But, for the trio, this evening the hours of waiting and continually prepping the Akilaria RC2 Class 40 yacht came to an end.

Phil Sharp is using the passage as a chance for a few days of training for the Vendee Globe solo non-stop race around the world which starts November 6th next year. While he awaits final details of his IMOCA 60 yacht to be completed, he sails this Class 40 with Conway and English round the world racer Alex Alley.

All things being equal, fair winds and all that, they should pass Islay - home of whisky sponsors Bruichladdich - very late on Saturday evening.

Phil Sharp, who lost his mother to brain cancer as a child is raising funds for Brain Tumour Research. Donations can be made at www.justgiving.com/PhilSharpRacing to fund research.

Full-Contact Extreme 40 Sailing On Sydney Harbour
With everything to play for, the Extreme 40s came out all-guns-blazing on Sydney Harbour today, for the much-anticipated final Act of the 2015 Extreme Sailing Series championship.

On a day of costly penalties for some crews, and race-ending collisions that reduced the fleet of nine boats to just six, it was SAP Extreme Sailing Team and Oman Air that shone through finishing the day first and second respectively.

First to fall foul of the full-contact racing was Australian wild card 33 South Racing, who were T-boned on the startline of race three by Lino Sonego Team Italia.

Despite the gaping hole in the back of her boat, skipper Katie Spithill finished the race in a respectable fifth place, before limping back to the dock for overnight repairs.

The Italian team soon got their just deserts as GAC Pindar, in another collision, damaged their steering mechanism at the back of the boat in race seven, resulting in both teams retiring from the day.

But probably the most significant incident of a hectic day - and maybe even the year - involved Red Bull Sailing Team. A coming together with Gazprom Team Russia seemed at first to be just a scrape, but on further inspection after racing it was found that the damage covered 30% of the boat's structure.

A repair can be made and the team will be on the water tomorrow, but for a crew gunning for the championship title anything less then 100% could be costly.

Stumped for what to put on your Christmas list? Then ask for gift vouchers for entry and/or berthing for the Regatta!

This three-day Regatta takes place from 28th to 30th May 2016 for all types of keelboat, from the larger IRC classes taking part in the IRC Southern Championship, to the 2.4mR class used in the Paralympics. The event is run by the Combined Clubs of Poole, and is held in the excellent sailing waters of Poole Bay and Poole Harbour.

Full details of the event, and how to buy the gift vouchers can be found on our website.

"Fantastic!" exclaimed the French skipper. "We were so disappointed last year when our broken boom made us retire, but this year has been really special. We have had very few problems, so it's a different story. Nomad IV crew is a combination of five regular crew, five French TP52 sailors and five Russian guests and we have had such an incredible time together. To win Line Honours was our goal and we have achieved that. The possibility of winning the race overall will be amazing, but we will have to wait until the other boats finish before we can have a double celebration."

Gerald Bibot's Belgian 42ft catamaran Zed 6, co-skippered by Michel Kleinjans, crossed the finish line of the RORC Transatlantic Race on Wednesday 9 December at 20h 00m 04s UTC in an elapsed time of 11days 7hours 50mins 4sec. Zed 6 is the fourth yacht to complete the race and the first to finish with just two crew on board. Zed 6 was the only yacht to take a northerly route to Grenada and although the route was longer in terms of miles, the wind strength proved far more favourable. To put the Two-Handed Belgian teams performance into perspective, as Zed 6 crossed the finish line, the Southern Wind 94 Maxi, Windfall was 220 miles from Grenada. 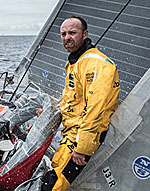 The J. B Kearney is awarded to individuals for their outstanding contribution to Irish Sailing. The committee unanimously agreed to award Justin the trophy in recognition of his two decades of racing at the highest level, including five Volvo ocean races and for being a leading Ambassador to the Irish sailing community.

It will be presented to him at the annual dinner of the ICC in Howth YC on February 19.

New York - Vendee
The New York - Vendee (Les Sables d'Olonne), the penultimate race in the 2015-6 IMOCA Ocean Masters Championship, is set to gather together all the top teams and sailors in the IMOCA class, keen to do battle one last time before the round the world race.

With its Prologue setting off from Newport, Rhode Island, (historically famous for having been the finish port of the OSTAR) bound for New York; the race village in the heart of Manhattan at North Cove Marina; a charitable promotion on the Hudson River and a race starting from the foot of the Statue of Liberty, the programme for the New York - Vendee (Les Sables d'Olonne) will provide an amazing spectacle during the week competitors will spend in the build-up to the start in New York.

Start Prologue (21-22 May): Newport - New York
Race village at the foot of the One World Trade Center
Charity Race on 27 May
Start on 29 May
3,050 miles along the great circle route
ETAs from 6 June
Finish Village in Port Olona (Vendee Globe Esplanade)

Seahorse January 2015
What's in the Latest Edition Of Seahorse Magazine 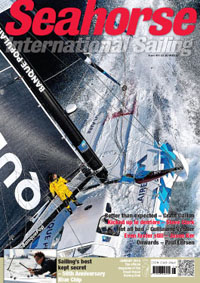 Update
Cost and self-reliance... now the debate gets going, Terry Hutchinson kicks back... as his back kicks him and Jack Griffin looks at the first AC test boats to go sailing and reflects on an unusually 'average' year for the Cup defenders

Hangin' in (and going fast)
Not much cash, not much time but Grant Dalton cannot be unhappy with his team's performance in 2015 - as he tells Bob Fisher

A brief history
The co-founder of the Caribbean 600, John Burnie's roots in the Caribbean regatta and race-charter scene go back a lot further than that

Ten years ago, a friend of mine who is involved in the German marine industry, asked me to paint a picture showing the defender and challengers for the 2007 America's Cup in an imaginary fleet race. Of course, I had to put the German entry in the favored position because this was his way to get his fellow Germans behind their team.

My friend had prints done from the painting and kindly sent me a numbered copy which hangs in my studio. I look at it most days ( that is quite a few days since 2007) and I think back to that cliff-hanging regatta which Team Alinghi eventually won by a very small margin. That very successful Valencia event was watched by a large shore-side audience and on international television by millions! As I said, I look at that print most days and I say to myself, 'that was a great regatta, it wasn't broke, so why did those fella's, try to fix it!

Don't get me wrong, I admire the current technology and the highly skilled young sailors who fly those new age catamarans at speeds that were the stuff of dreams ten years ago, but there is this slow but certain pervasion that the guys running the present America's Cup road show, will dumb the whole thing down to a television spectacular that will be the 'Cirque du Soleil' of water sport. I've nothing against that idea just as long as they give the America's Cup back to someone who will return it to it's old ideals. -- Jim Bolland

John Nichols, Sailing Legend Passes At 100
John Nichols, passed away at the ripe age of 100 in San Francisco this past Sunday.

John served in the US Army in World War II, stationed in New Guinea where he built and assembled landing craft for the invasion of the Pacific islands. Upon his return to the States, John met and Married Doris and thereafter established the New York based Nichols Yacht Yards.

He was an avid racer and member at the Larchmont Yacht Club since 1948, sailing IODs, Etchells and Shields among others. He loved team racing and participated in many team racing events including those against the Royal Bermuda Yacht Club where he became a lifelong friend of Shorty Trimingham. In 1986 he was awarded The Alex Gest Trophy, Larchmont Yacht Club's most prestigious award, in recognition of his distinguished record as an International Judge.

John was involved in at least 3 America's Cup campaigns as a sailor in Defender trials. He also served on the New York Yacht Club Race Committee for the America's Cup. As a boat yard owner, John was a tinkerer and an inventor. He invented many of the rope to wire splices used today. He was a race committee innovator who set up many of today's procedures.

During the decades he spent at the St. Thomas Yacht Club, John ran their Rolex Race Committee. Because of John's expertise and reputation in race management, and under his tutelage, STYC ran regattas for Maxi yachts and the 50's class. He was one of the first to use the word "customer" when referring to entries.

Besides being an outstanding race officer, John was an internationally renowned IYRU/ISAF International Judge and is remembered well for his jury work throughout the USA and Caribbean.

John was a renaissance man; old school and old fashioned, but innovative and forward looking. Most of all, however, he was a wonderful friend and an honored and loved member of the sailing community.

Built by Premier Composites, Dubai and designed by Shaun Carkeek, the C60 is a new breed of ultra-light displacement raceboat.

The Carkeek 40 Mk2 incorporates the latest grand prix thinking into its design.

The Last Word
It is a kind of spiritual snobbery that makes people think they can be happy without money. -- Albert Camus