After 24 days and 10 hours of racing they finish runners up only 1 hour 54 minutes and 22 seconds after Class40 winners Le Conservateur, Yannick Bestaven and Pierre Brasseur.

Finn Gold Cup: Young Guns Ready To Do Battle
The class has placed a lot of emphasis recently on its FINNTEAM initiative to support a multinational team of sailors and help them to achieve their Olympic dreams. Two sailors from the team - Alejandro Folgia (URU) and Santiago Falasca (ARG) - are in Takapuna hoping to qualify their countries for the Rio Olympics. For the young Falasca it is his first world championship, but he is relishing the challenge.

Also at his first Finn Gold Cup is Andre Hojen Christiansen (DEN). After placing seventh at the 2015 Silver Cup (Junior World Championship), he has been befitting from being invited to join the training group with Jonas Høgh-Christensen (DEN) in Florida.

The current Junior World Champion, Ondrej Teply (CZE) is also looking for Olympic qualification. "The goal here is to qualify the country, and then let's see. My goal is that I would like to improve my result from my first Gold Cup in Santander where I finished in 59th place."

Even if you do find a pair that ticks every box, that looks good, grips well and keeps you warm, dry and comfortable, you'd still struggle to love a boot. Unless, of course, it's a Dubarry boot. Take the Ultima, with its blend of rich, supple leather and durable man-made fibres, the hi tech GORE-TEX liner that acts like an air conditioner, the award-winning grip of the sole - yes, those are all there, recognised benchmarks of quality, but what you can't see or touch or smell is the soul. Ultima boots have it in abundance because, like you, they change. They gain experience at sea and improve with age just as surely as you do. That's why sailors love them.

US Sailing Awards Hanson Medals For Rescue At 2014 Newport Bermuda Race
The US Sailing Safety at Sea Committee has awarded the Arthur B. Hanson Rescue Medals to a sailboat's crew for their heroic efforts displayed during the 2014 Newport to Bermuda Race, hosted by the Cruising Club of America and the Royal Bermuda Yacht Club. The award ceremony and dinner took place at Indian Harbor Yacht Club in Greenwich, Conn. on Friday, November 13.

On June 22, 2014 in the mid-Atlantic Ocean, the crew of the Taylor 41 Wandrain put out a mayday call. The boat had been taking on water with serious hull damage. Three boats responded to the VHS call; Rocket Science, Black Watch and Dorade. Black Watch's afterguard - John Melvin, navigator Peter Rugg, and the watch captains Jamie Cummiskey and CCA member Lars Forsberg - decided that their larger vessel was best qualified to stand by and escort Wandrian to Bermuda.

"If the boat has to be evacuated and someone else needs to take eight or nine people aboard, we should be there," Rugg later explained. "This is the stuff that's important to the sport." Black Watch, a custom S&S yawl of 68 feet, made in 1938, dropped out of the race to go to the assistance of Wandrain.

2018 Golden Globe: 25 Provisional Entrants Now Confirmed
Sailors from America, Australia, Britain and France head the preliminary entry list for the 2018 Golden Globe solo round the world race. The event commemorates the 50th anniversary of Sir Robin Knox-Johnston's pioneering victory in the Sunday Times Golden Globe race back in 1968/9 which led to the British yachtsman becoming the first person to sailor solo non-stop around the globe.

The 24 men and 1 woman - Britain's Susie Bundegaard Goodall - have each paid an initial A$3,000 entry fee, though some names remain confidential until sponsorship announcements are made later this year. Other entrants hail from Austria, Brazil, Ireland, Italy, Norway, Palestine, Russia and Switzerland.

Falmouth is now confirmed as the start and finish point for the Race, with the National Maritime Museum, which is putting on a major exhibit in 2018 to mark the 50th Anniversary of the original Sunday Times Golden Globe Race, playing host to the event. Competing yachts will be based in Pendennis Marina, and the race will be started using the historic gun emplacement on Pendennis Point overlooking Falmouth harbour.

Like the original Sunday Times event, the 2018 Golden Globe Race is very simple. Depart Falmouth, England on June 14th 2018 and sail solo, non-stop around the world via the five Great Capes, and return to Falmouth. Entrants are limited to use the same type of yachts and equipment that were available to Robin Knox-Johnston in the first Race.

The three-day selection process, which will be held near Tokyo from November 27 to 29, will combine intense fitness testing and sailing exercises along with personal interviews.

Ultimately, the group will be narrowed down to just two athletes, who will be invited to join the team.

Hundreds of Japanese athletes took part in the three-month application process, with professional ice hockey and basketball players joining top sailors and rowers in trying to make the team.

Dean Barker, team general manager Kazuhiko Sofuku, tactician Chris Draper and Shaun Mason, the shore team member, will all be present in Tokyo to conduct the trails and make the final selections.

All new team members will be expected to move to SoftBank Team Japan's base in Bermuda to live and train for the next two years as the team builds it's challenge for the America's Cup in 2017. -- Josh Ball in The Royal Gazette 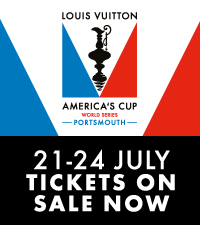 The Race Village - Be part of the action. Part of the crew.
Get under the skin of the 'America's Cup' - see the sailors close-up, learn about the racing and the technology. Experience the exhilarating boats racing, with live commentary and big screens giving a blow-by-blow account as the teams reach incredible speeds.

At the end of a lengthy decision, the ISAF's Disciplinary Committee and Review Board have concluded that a new Hearing would be required to exonerate Mitchell as he requested.

49. In the light of all of the above factors the Panel concludes that, notwithstanding Mr Mitchell's request for the Panel to exonerate him, it would be inappropriate to recommence a fresh hearing into this unfortunate episode so long after the event.

50. Consequently, pursuant to the Rules of Procedure Rule 2.6, and under RRSAC Rule 69.2(a), the Panel orders that there shall be no further proceedings in this matter, the case is considered closed, and there is no finding by the Panel as to the truth or otherwise of the AC Jury Report or of any breach by Mr Mitchell of the RRSAC.

They also noted that the practical maximum penalty/suspension that could be applied is 18months, based on the penalty imposed on Dirk de Ridder by the Court for Arbitration for Sport after they conducted a 'de novo' or fresh Hearing, without relying on the evidence gathered by the International Jury for the 34th America's Cup. -- Richard Gladwell in Sail-World.com

The UK Sailing League Trial Event is a new club-oriented one-design sailing model that has been successfully run in Germany as the "Deutsche Segel-bundesliga" over a number of years and is running in thirteen European countries. The RTYC has bought into the concept and has partnered with the RYA to help launch the new enterprise. Sailing clubs have been invited from around the UK to compete at the trial event before the idea is rolled out nationally.

The event format is a round-robin schedule with teams racing each other a number of times before the team with the lowest number of points is crowned the winner. Six boats will compete in each 15-minute race with teams rotating boats throughout the weekend. The RYA will assist in the running of the events of the UK Sailing League with the end goal being a greater participation in club keelboat racing around the country.

And according to the trust's Neil O'Hagan, the sail training initiative is "the only the only independent charitable project included in both this agreement and the Irish Government's Capital Investment Plan.

"This secures our future and most importantly our ability to deliver youth development, peace-building and maritime education voyages for generations to come. In the coming weeks we will be working with both administrations to determine timelines," he added.

The Atlantic Youth Trust has proposed the construction of a new tall ship as a replacement for the Asgard II to bring young people from both sides of the border together for sail training voyages.

The Last Word
He who laughs most, learns best. -- John Cleese

Back On Tuesday
Your humble narrator will be travelling the next few days on one of life's passages... the funeral for my father who died last week of ALS at age 89. He was a doctor for many decades, a quiet, gentle and brilliant man. Those who know me personally will wonder why more of that didn't rub off. He lived and died with dignity and grace. If your parents are alive, call them today just to say hello.