Star Worlds
The official results are out! And it's a clear win for Lars Grael and Samuel Goncalves with 9 points less than the second, another Brazilian duo but probably not the one expected: Marcelo Fuchs and Ronald Seifert.

Third are the Italians Diego Negri and Sergio Lambertenghi, who miss once again the ‪GoldStar‬ after letting it slip last year in the last race.

It is the first time that Gabart, who won the solo round the world Vendee Globe race in 2013 at his first attempt at the age of 29, has triumphed in the Transat Jacques Vabre race. He was second in the IMOCA class on his first ever ocean race in 2009. Bidegorry was on the winning multihull in 2005.

Coville and Nelias are second Ultime in this 12th edition of the Transat Jacques Vabre. Their elapsed time for the course is 13 days 0 hours 47mins 38 secs, sailing at an average speed of 17.26kts on the theoretical course of 5400 miles (10,000 km) from Le Havre to Itajaí. But in reality, the 31 metres maxi trimaran sailed 6451 miles on the water at an average speed of 20.51 kts.

The number of entries to the 2016 edition of Quantum Key West Race Week has exceeded 100, indicating one of the strongest early turnouts in years to this mainstay on the international sailing calendar held over January 17-22, 2016. Currently there are 16 classes organized: nine one-design and seven monohull and multihull classes racing under handicap. This indicates a diverse range of boat types attracted to race in the winter sun in Key West, with teams from 10 nations represented among the entries thusfar.

Besides providing the best in race management on the water, organizers from the Storm Trysail Club will enhance the shoreside experience for all entries with afternoon seminars, evening prizegivings and social events, and full logistic support through their partners and vendors on site...plus the unique ambience offered by time spent in Old Town Key West. 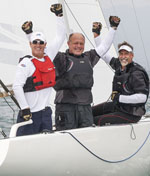 Going into the final day of the Etchells World Championships, which have been taking place for the past week out of The Clearwater Bay Golf and Country Club Marina, USA entry Aretas held a five point lead over compatriot Scimitar, with a gaggle of boats in prime position to step up on the podium in third place.

The Race management team was on the course an hour earlier than usual, with PRO Kevin Wilson finding 8 to 10kts ENE and "no sheep in the paddock" on perhaps the flattest race course to date.

In a nail biting finish on the final beat, in spite of Scimitar taking their third bullet of the series after leading all the way, Aretas made up a further two places to finish fourth with celebrations on board as McClean, Skip Dieball and Jeff Eiber crossed the line as 2015 Etchells World Champions.

Mini Transat: The ETA Becomes Clearer
It's almost certain: trade winds should accompany the Minis up until their arrival in Pointe-a-Pitre. There is no longer much difference in speeds between north and south, and everyone is moving at a good pace towards the finish line.

In the prototypes, Frederic Denis (Nautipark)  holds the lead, while in the series boats, Julien Pulve (Novintiss)  comes up, for the first time in the race,  to snatch the lead position from Ian Lipinski (Entreprises Innovantes).  On the other side of the Atlantic, Francois Jambou (Concevoir et Construire) has started off again.

For the first time since the start, the men in the north have reached speeds that can compete with those on the southern route. Chris Lükerman (CA Technologies) finally went above 10 knots.

Franck Cammas Prepares To Round Cape Horn In A Foiling Catamaran
Franck Cammas, one of the most successful French sailors in the world, is preparing to do something never done before: rounding Cape Horn in a foiling catamaran. This is a world first which will begin on November 8, 2015.

The Julbo Sail Session? It is an adventure between Ushuaia (Argentina) and Cape Horn (Chile), which the Julbo skipper, Franck Cammas, will share with an amateur sailor, Johannes Wiebel (GER). They will take a flying catamaran round Cape Horn and then moor there.

Round the world racing teams have chosen Dubarry's Crosshaven in every edition of the race since the boot was developed with Green Dragon in 2008. There are several reasons for that. First, the innovation that impressed the Green Dragon guys most: the integral gaiter. Made of lightweight, hard-wearing, water-resistant fabric and cinched up with a drawstring, this gaiter means you can kneel down and work on the foredeck without suffering the dreaded 'bootful of green' that kills comfort for the rest of the passage.

And when you're dodging icebergs in the Southern Ocean as freezing winds snap at your vitals, you'll appreciate the 350g GORE-TEX Duratherm membrane and thermally insulated footbed that will keep your feet, at least, toasty.

Then there's the award-winning grip of Crosshaven's non-slip and non-marking sole. If you're trying to stay vertical on deck, and several tonnes of water traveling at 30 knots is trying to persuade you that you might be more comfortable lying down, you need your feet to stay planted.

James Spithill Joins Comanche Crew Sydney Hobart
One of Australia's leading sailors will be working with a US team to take the prestigious Sydney to Hobart line honours trophy away from Australian shores in the 71st edition of the famed ocean race.

Two-time America's Cup skipper and World Sailor of the Year James Spithill has confirmed to the Daily Telegraph he is heading home for another shot at winning the fastest time honours in the race on the American invader Comanche.

Spithill, who orchestrated one of the greatest comebacks in sporting history at the last America's Cup and is now based in Bermuda, has twice helped the US to the Auld Mug as skipper of Larry Ellison's Oracle Cup team

Thanks to the record eight victories of the Mark Richard skippered Wild Oats, Anthony Bell's win on Investec Loyal in 2011 and Grant Wharingotn's with Skandia in 2003, Australia yachts have been the fastest to Hobart in 11 of the last 12 races south.

But prior to this between 1998 and 2002, Australia was forced to play second fiddle to international entries in all five races with Ellison's Sayonara wining the deadly 1998 race, the Danish record breaker Nokia winning in 1999, the Swedish entry Nicorette first in 2000, the Swedish round the world racer Assa Abbloy claiming the prize in 2001 and the New Zealand yacht Alfa Romeo victorious in 2002.

Since being bested by Wild Oats last year Comanche has been almost untouchable with the highlight of her year setting a new world 24 hour record of an astounding 618.01 nautical miles in the Transatlantic race.

This translates to a staggering average speed of 25.75 knots for the fastest monohull in the world.

Australia's top trio of Wild Oats, Perpetual Loyal and Ragamuffin have been working overtime to modify and optimise their boats for the two-pronged Australian assault.

Ireland's Individuality In Boats Is Our Answer To The World's Uniformity
Ruffian 23s in Dun Laoghaire Harbour. Click on image to enlarge.

Located on the fringes of Europe and set in challenging seas, Ireland does not offer an ideal setup for large-output series-production of recreational boats. We lack the economies of scale which are conferred on giant production companies in the crowded heartlands of Europe.

W M Nixon takes a look at some of the stories of boat-building in Ireland, and reckons from current experience that specialized work is what we do best.

Despite the less-than-ideal conditions, over the years enthusiasts have given the Irish production fiberglass boat-building challenge their best shots. The continuing and much-enjoyed presence of boats of the Shipman 28 class at many of our sailing centres is a reminder that once upon a time, from the 1970s onwards in Limerick, there was a company called Fibreman Marine, later Fastnet Marine, which built the Swedish-designed Shipman 28 and then expanded the range to include the Fastnet 24, designed by Finot of France.

Meanwhile on the shores of Cork Harbour, a popular range of variations on the Ron Holland Shamrock Half Ton design kept a harbour-side production plant busy for some years. And out west in Tralee, O'Sullivans Marine found themselves some decades ago in the forefront of design development with a new GRP National 18 built around the enthusiasm of the Cork Harbour fleet, and then they went on to build large numbers of the Tony Castro-designed 1720 Sportsboat.

Victory For NZ's Burling And Tuke In The Build-Up To 49er Worlds
Peter Burling and Blair Tuke have secured another victory in the 49er class taking out the 2015 South American 49er Championships sailed in Buenos Aires, Argentina over the past four days.

The victory comes just days before the outcome of the 2015 ISAF Rolex World Sailor of the Year Awards will be revealed. Burling and Tuke are among five finalists for the prestigious award, set to be announced at a gala dinner on Tuesday evening in China.

The entry lists in both the men's and women's events were  heavy with talent featuring all the world's best crews in the Olympic skiff classes, as the regatta acted as a build up for this month's 2015 49er and 49erFX World Championships at the same venue.

If there has been one stand out winner in the most serious and fun filled class it was the Melges 32 STAR.

Sold to her current owner several years back, and now named ELEMENT, she is now back on the market. She still comes complete with every bell and whistle and upgrade that is available in this strict one design, she has proven time and time again she has the pace to win. Now with many North and Evolution sails, the trailer with the covers, one can step right on and start winning.

The Last Word
You are never too old to become younger. -- Mae West