The organisers are welcoming a record entry of rookies, 34 skippers who will race the renowned classic two handed Autumn Transatlantic for the first time.

They are between 22 and 55 years and are all driven by the same determination to finish and race well against the more established, more experienced racers. This new blood, all race newcomers, appears to come from all sailing backgrounds including crewed racing, the Figaro Circuit and the Mini 6.50.

Ultimes, The Land of the Giants
It is no surprise at all that there are no rookies in the four strong Ultime class. These giants is populated by leading, vastly experienced sailors, household names of the multihull world.

Class40: Rookie Country
On the other hand Class 40 has 18 Transat Jacques Vabre first timers. There are 14 entries and so it does not take a mathematics degree to work out that some co-skipper pairs comprise two Rookies.

In fact there are eight boats on which both skippers are race first timers.

No less than seven sailors from the Figaro Beneteau Circuit will make their Imoca class debut.

Among the IMOCA Transat Jacques Vabre first timers there are also a bunch of former Mini 6.50 sailors.

"We were repairing one of the beams the night before the start, we were repairing a bit of damage sustained from setting some of our records, so we didn't get to do our normal practice and preparation.

The start of the race went really well and we had a very nice sail up to Sicily, then in the Messina Strait, we found a wind hole, which was a bit of a battle to get out of. It was a wonderful race with Rambler for much of the way, they made a better call in Messina going inside and it took us a while to get back from that. The conditions were light with lumpy seas, which we don't do so well in but towards the end we finally got our legs and were able to show the speed we are capable of. 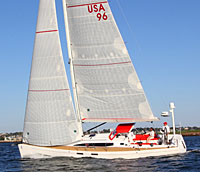 J/122E is the perfect blend of all-around J Boat performance with live-aboard cruising luxury. The "E" is for evolution in performance design.

Why settle for less than sailing where and when you want to in comfort, style and speed? From its sailor-friendly cockpit with optimized sail handling to the open, naturally lit three-cabin interior, the J/122E is as easy to sail offshore as she is entertaining guests for dinner.

Quick and responsive, powerful and stable, and pure magic to steer, the J/122E is what sailing is all about.

To learn more about the new dual-purpose E series including the J/97E and J/112E please visit www.jboats.com

JOG Season Round Up
The concluding race for JOG's 64th season and decider for the inshore trophies was Round the Owers truncated into Round a Central Solent Triangle with kedging. Sensibly the race team decided anything more ambitious was out of the question with the forecast of Saturday 3rd October! Class winners were Hot Cookie, Just So, Windjammer, Moondog and, for 2-handed, Juliette.

Offshore results were decided on the previous weekend with the customary last race to Cherbourg; competitors reporting some of the best night-time conditions they could remember and the bonus of dolphins, or some say porpoises, leaping clear of the water at the finish.

Special mention to Ariane (Oyster 26) being the smallest boat in the fleet for winning class 6, the other race victors being Pincer Movement (2-handed), Zonpuka, Just So and Old Mother Gun.

A new destination this year was Dielette with an interesting course (sharp left turn at the Casquets) and a very nice port on arrival in delightful conditions. The 2016 programme is already on the website and to mark JOG's 65th year of racing another new destination will be Roscoff, starting on Saturday 28th May.

Venice, Italy: Nine maxi yachts challenged each other on Saturday , October 17th in a succession of tacks and marker turns during the 2nd edition of the Venice Hospitality Challenge, the sailing regatta, brainchild of Mirko Sguario now in its second edition, and warmly welcomed by the finest hotels in Venice.

Each maxi yacht bore the colours of one of the participating luxury hotels.

The course of the regatta's 2nd edition extended six nautical miles between the Giudecca Canal, St. Mark's Basin and the Lido; a spectacle viewable by everyone from the overlooking waterfront promenades.

Big names from the Italian and international sailing scene were aboard the maxi yachts which will be hosted in Venice's new Santelena Marina. Starting with Paul Cayard, skipper who received international acclaim in 1992 for having brought Italy's Il Moro di Venezia to win first the Louis Vuitton Cup, followed by the semi-final of the America's Cup against the Americans.

With the Extreme Sailing Series™ adopting a new boat for 2016, there is a unique opportunity to purchase a fleet of up to 10 Extreme 40 catamarans as a set, or individually, that are priced to sell.

Superfast, exciting to sail and to watch, the Extreme 40 catamaran was developed by TornadoSport in 2005 to bring sailing to the public on short courses in stadium settings.

Built in carbon-fibre, these "flying machines" are 40ft long and have a beam of 23ft. They have a top speed of around 40 knots. Complete with sails, shipping container, with spares and road container negotiable, these well-maintained boats could offer excellent corporate entertainment or activation around another race campaign.

Available from mid-December to ship from Europe/Australia/GCC.

Richard Gladwell On The Live ACWS Video
Some of us have swallowed the dead rat and ponied up for the payment of the per regatta subscription. So far we have only had to pay two subs for four days of racing across three regattas.

The coverage is very good, the racing exciting, and it is possible to throw the video up onto a screen bigger than a mobile phone - while cursing the **** that dreamed up this ridiculous broadcast model.

Like so much with the current America's Cup, the video coverage seems to have a death-wish.

A great product that does its damnedest to take the most awkward approach to event management - and seems to go out of its way to shed its existing fan base at every opportunity.

Sure Bermuda will be a great event for those that are there - on an island, half the size of Waiheke, 650nm out into the Atlantic Ocean - but the fanbase isn't in Bermuda. It's global.

Other events such as the Volvo Ocean Race, Extreme Sailing, and World Match Racing Tour have a way better understanding of the marketing of sailing than do the mandarins running the America's Cup. Even dear old ISAF have got their act together.

ACEA now stands in a broadcast model of its own. Are they really the only ones who have got it right, and all the rest are wrong?

Next year sailing fans will have much more choice - with the Olympics, a new format of the Extreme Sailing Series sailed in foilers and the new Match Racing event - all competing in the same performance sailing space as the America's Cup.

All except ACEA will be running the same video broadcast model - available live, or in replay either in highlight or on-demand. With that bevy of sailing action available able to be watched from the comfort of your own home on a large high definition video screen - who is going to be bothered squinting at the America's Cup coverage on a phablet screen, and paying $10/event for the privilege of what is often just one day of racing??

Student Yachting World Cup
The Student Yachting World Cup (SYWoC) is an event organized every year in France by students for students. Created in 1979 under the name of Course de l'Europe, the cup was just meant for participants from Western Europe. But, as time went by, more and more Eastern European countries joined the cup. That's why the Course de l'Europe changed its name to become the SYWoC.

The regatta lasted one whole week in France and counted about 150 competitors, representing 15 countries from all around the world.

RS:X World Championships In Oman
Racing for the 145 athletes is split into two fleets - men and women - and each fleet has a Blue and Yellow group selected according to daily rankings. Each group contests three races per day in the opening qualifying rounds.

Today, the 60-strong women's fleet was first off and Peina Chen (CHN), was unstoppable. The lightweight, 26-year-old who recently finished second at the ISAF Sailing World Cup Qingdao, led all three races including the last which she won by an impressive 1 minute 6 seconds. She goes into day two with a three-point lead over Bryony Shaw (GBR) - world Number 1-ranked women's windsurfer. In third place after day one is Malgorzata Bialecka (POL) with 10 points.

Racing was exceptionally close in the 85-strong men's fleet although the 9-10 knot shifty breeze proved a tactical challenge.

Pierre Le Coq (FRA) who finished the day with two firsts and a second is the overnight leader of the men's fleet. Le Coq, from Brest, Brittany, said it was technically quite difficult on the race course so he was pleased with his consistent performance.

Ferraris Auctioned: 8.5M For RNLI
Two rare Ferraris thought to be worth £8m were recently auctioned off for £8.53m today with proceeds going to the RNLI.

Wealthy businessman Richard Colton left the cars to the charity in his will in what could potentially become the most generous gift the RNLI has ever received.

The RNLI's chief executive, Paul Bossier said: "We are overwhelmed by the sale price of the two Ferraris, a legacy so generously gifted to our charity by car enthusiast Richard Colton.

"His legacy will help our volunteer crews carry out their lifesaving work around the coast. In line with Mr Colton's wishes, some of the money raised from the sale will go towards funding a new Shannon class lifeboat which will be named after his Mr Colton and his late wife Richard and Caroline Colton." 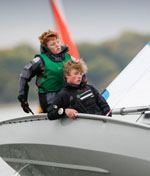 Each team consists of six sailors, two sailors in each of the three boats (Fevas for Juniors and Fireflies for Youths). The sailors then have to work together to bring their teammates to the front of the race, the team with the lowest combined points wins the race. The races are 10 minutes long and there can be up to 200 in one day.

Racing in Fevas, 'The Sailing Assassins' (Matt Beck, Henry Chandler, Drew Wright, William Heathcote, Ellen Main and Hannah Roberts-Straw) finished third in the Saturday round which was enough to qualify them for the Gold A league. They then 'assassinated' their competition winning all four of their Gold A races to take the Junior Championship title.

West Kirby Sailing Club dominated the Youth racing event. Having grown-up racing Fireflies, 'West Kirby SC' showed the other teams how it was done, winning all of their 15 races to be crowned well-deserved Youth Champions on Sunday afternoon.

Rare Ker 40 with Wheel steering. Both Inshore and Offshore complete setups with respective sail inventories. Well maintained and fresh out of a mini refit. Available after Fastnet 2015.

The Last Word
We are made wise not by the recollection of our past, but by the responsibility for our future. -- George Bernard Shaw