Stellar Cast In Malta
Strombolicchio, one of the stunning islands which forms part of the course for the Rolex Middle Sea Race. Photo by Rolex / Kurt Arrigo. Click on image to enlarge. 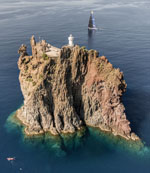 The 2015 edition of the Rolex Middle Sea Race, organised by the Royal Malta Yacht Club, will start this Saturday, 17th October, in Grand Harbour, Malta. For the second year in succession, well over 100 yachts will be competing, flying the flags of 22 countries.

The 36th edition of the race has a record number of 11 canting keel carbon fibre flyers racing, and weather permitting all of these high performance yachts are capable of breaking the course record, which has stood since George David's Rambler 90 record run of  2007 (47 hours 55 minutes and 3 seconds).

Two hi-tech multihulls will be racing in the MOCRA Class and both are very capable of beating Rambler 88 around the 606-mile course. Lloyd Thornburg's American MOD 70, Phaedo3, has been smashing world records since being launched last year. Phaedo3 is co-skippered by Brian Thompson

Californian Peter Aschenbrenner will be racing his 63-foot Nigel Irens designed trimaran, Paradox. Whilst on paper, Phaedo3 is faster than Paradox, under the MOCRA rating rule, Paradox beat Phaedo3 in this year's Rolex Fastnet Race. Paradox crew includes the world speed record holder, Paul Larsen, who achieved over 65 knots in Sailrocket in 2012.

The Audi Italia Sailing Team has confirmed its supremacy in the Melges 24 Audi tron Sailing Series (recording a total of 5 acts, 27 races, 4 discards).

Riding the rails in March might sound like a bone-chilling experience. Not so when you're hanging tough off a TP52 in nearly 20 knots of tropical tradewinds while racing round-the-rocks in the St. Thomas International Regatta (STIR), with the rest of the fleet in red hot pursuit.

"We welcome European boats with open arms," says regatta director, Bill Canfield. "For the first time ever STIR will offer an ORC Club racing class. It's a great bang for your buck with Key West Race Week and STIR offering this rule at both events if you come across the pond. There's easy transport from Miami to St. Thomas right after Key West. So, put the Caribbean on your winter schedule this year."

New too, the STIR will run a one-day round-the-island race on March 24. This gives big boats especially a chance to tune-up and stretch their legs prior to the main event.

World-class racing, the chance to trade tacks with America's Cup, Volvo Ocean and Olympic crews and detune at nightly rum and reggae parties is what earns STIR its motto, 'We Love It Here' You will too.

Lighter Breeze Shifts Across Haifa Bay On Day 2 Of 470 Worlds
A lighter breeze filled in over the race course in Haifa Bay on day two of the 2015 470 World Championships, proving a challenge for the teams as the wind came down the race track in bands and patches.

Racing got underway in around 8-10 knots, decreasing to 6 as racing wrapped up. Different sides paid at different stages of the race, mixed up with a reasonable amount of current. Six races and just four OCSs showed the restraint from teams, with no mistake worth making at this stage of the Championship.

Four different leaders across the races in each of the 470 Men Yellow and Blue fleets, with wins to Pavel Sozykin/Denis Gribanov (RUS) and Jordi Xammar/Joan Herp (ESP) in the yellow fleet, and Paul Snow-Hansen/Daniel Willcox and Lucas Calabrese/Juan De La Fuente (ARG) in the blue fleet.

Mat Belcher/Will Ryan continue to dominate, but all change in the leaderboard line-up behind. Points are close, including a four-way tiebreak for teams in third through to sixth on 16 points apiece, and a three-way tiebreak for the teams in seventh through ninth on 17 points each.

With the qualification series now complete, the thirty boat gold and twenty-nine boat silver fleets are decided and the nations in the hunt for World Championship podium places and Olympic Qualification slots are determined.

The 470 Men gold and silver fleets will have two races on Wednesday 14 October, starting after the 470 Women.

Overnight leaders Agnieszka Skrzypulec/Irmina Mrozek Gliszczynska of Poland hold firm in the lead, able to discard their 36th from race 4. Defending World Champions Lara Vadlau/Jola Ogar (AUT) up their game to score a 2,1 and accelerate to second overall, whilst Hannah Mills/Saskia Clark (GBR) maintain third place on the scoreboard.

Two races on Wednesday 12 October for the 470 Women, with a scheduled starting time of 1300 hours.

Phil is no stranger to Cowes Week, having started as a course setter 11 years ago. After four years he progressed to Course-Setting Coordinator, responsible for the planning and management of the course setting and race progress teams. Phil is an experienced yacht racer and has competed in many European events in a wide range of yachts including helming in the 6 metre and Farr 45 classes and race navigation on a 135ft Classic.

Phil is also a qualified race officer and has run a number of national championships in the Solent. In 1998, as Project Director, he was responsible for the planning, PR and operational delivery of the Cable & Wireless Adventurer, a successful round the world record attempt by a motor vessel. The success and record of 72 days still hold today.

Phil will join the team in early October and replaces Stuart Quarrie who, after seventeen years with CWL, has departed to spend more time racing and cruising with his family.

Next year's regatta takes place from the 6-13 August and more information is at www.aamcowesweek.co.uk

The IDEC Sport Maxi-Trimaran Has Been Launched
Photo by Jean Marie LIOT / DPPI. Click on image to enlarge.

After three weeks carrying out a brief refit at the Multiplast yard in Vannes, Francis Joyon and his team launched the IDEC SPORT maxi-trimaran (ex Groupama 3) today (Friday). She will go on stand-by for the Jules Verne Trophy in late October. This is another step forward for Joyon, who is due to carry out his first sailing trips next week with a crew of just five, whose names will be revealed at IDEC SPORT's christening ceremony on 14th October in La Trinite-sur-Mer in Southern Brittany.

Planning to go on stand-by in late October for the Jules Verne Trophy, Francis Joyon wants to begin training quickly, and will probably be out sailing next week. There are plenty of new things for the fastest solo sailor in the world to discover in the near future, as he will be attempting his first crewed record.

Seahorse November 2015
For you to devour in the latest issue... 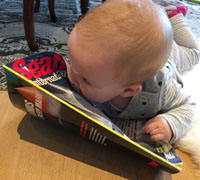 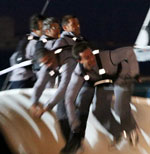 Racing at night, a few metres away from the Molo Audace. Tacking and gybing buoys close to moored boats waiting for the Barcolana Regatta. Reviving a challenge that for more than ten years has seen the crews and owners of one-design class boats, among which about ten UFO 28 boats - quick and nimble one-design class boats - challenge each other and do everything to beat their opponents. This is what Barcolana Jotun Cup is all about.

The Barcolana would not be complete without the regatta "By Night": the sun sets, the floodlights are switched on and the breeze is waited for. As the start signal is given, the ancient "feud" between crews breaks out again: a regatta that turns into a show for thousands of people crowded on the quays on the evening before the Barcolana Regatta.

The Barcolana By Night Jotun Cup was organized in association with the Italian Navy League Trieste Division and Yacht Club Adriaco and was held last Friday night.

Fancy Dinner At The Cutty Sark?
Once every decade or so the world's sail training organisations come together for a transatlantic tall ships race, bringing young people together from all over the world. The Rona Sailing Project (www.atlantic2017.org and www.ronasailingproject.com), which has been taking young people from all walks of life to sea for over 50 years, is hoping to enter its flagship yacht "Rona II" into the "Rendezvous 2017 Tall Ships Regatta", so that more than 120 teenagers can enjoy a unique maritime adventure taking them from Greenwich, England to Sines (Portugal), Bermuda, Boston, Quebec and Le Havre. In doing so they will be stretched to the limit, succeeding only through teamwork, trust and tolerance: lessons that will remain with them throughout their lives. After the race, the fully refitted "Rona II" will return ready to serve for a further decade, taking a further 2,000 to sea.

To prepare "Rona II", her afterguard and crew for the race is a huge effort, and to start this the Rona Sailing Project are holding a fundraising dinner at the world famous "Cutty Sark" clipper ship at the race's start venue, Greenwich. The black tie evening, Friday March 11th 2016, will comprise a champagne reception, a talk by the ship's curator and opportunity to tour the ship, and a three course dinner with wine, served directly under the ship's gleaming copper hull. It promises to be an unforgettable evening in remarkable surroundings, contributing to a worthwhile cause.

"I am absolutely delighted to have been confirmed as the seventh official entry for the Vendee Globe 2016. Seven is my lucky number. This official confirmation is a very good thing and it has allowed us to choose one of the best spots in Port Olona for the previous days leading up to the Big Race"

Meanwhile, FaceOcean will be sailing daily over the next couple of weeks with guests and media in the bay of Toulon. Early November she will be put on the hard stand for a long winter refit , before being re-launched in March for a busy sporting calendar.

"The Vendee Globe is a Solo race indeed ... but I do not want to do it alone ... Hence I invite you to get onboard FaceOcean,  to put your photo of the hull and to participate in the Vendee Globe's adventure with me... As a Fan, you might be able to win my boat 100% for Free ... Have a look on www.faceocean.fr "

Already supported by over 1000 fans and 323 Crew-Members, our goal is to embark the World largest sailing community for attempting to climb the Everest of the Seas: The Vendee Globe.

The One Design Soto 40, Ngoni is actively for sale. Professionally sailed and maintained, no expense has been spared to keep this boat at the competitive end of this exciting class. This is a turnkey operation ready for a team to step on and be immediately competitive with the Soto 40 fleet and under IRC and ORC.

Huge potential with this out and out racer.

The Last Word
In this bright future you can't forget your past. -- Bob Marley